I've been having some issues and hoping that one of you immensely knowledgeable lot can maybe help me out by suggesting a solution?

However, I'm having all sorts of issues with it, including the following:

* Frequent flickering, when a resolution 'takes' on the TV at all. Sometimes it will, without warning, just cease to support the input and become a compressed band of colour and glitches taking up the top third of the screen.

* Signal loss - for instance, I will be playing a PC game and the signal will completely drop, but comes back if I switch into/out of game mode (it doesn't matter which, incidentally - the issues occur whether I'm in game mode or not), or if I unplug and re-insert the HDMI cable.

* Resetting of status - removing Input Signal Plus designation and pushing the resolution back to 1080p as a result.

I have tried two different HDMI 2.1 cables which claimed to be certified - a Club 3D and a Monoprice. The TV is on the latest firmware, too.

I don't think the problem isn't related to the graphics card specifically because I have tested on a friend's monitor and it works fine. It also worked fine on my old TV at 4k 60Hz, so I don't believe the card to be faulty. It doesn't seem to make any real difference whether I'm in RGB/4:2:0/4:4:4 colour mode either (or with G-SYNC on/off in the Nvidia Control Panel - although that option only appears when in Game Mode anyway).

Unfortunately, the delay in arrival of the second HDMI 2.1 cable (due to Brexit customs delays) meant I was outside of the 28 day "refund for any reason" window with Samsung. But their support people now are refusing to entertain the prospect of a refund because of being out of that window. 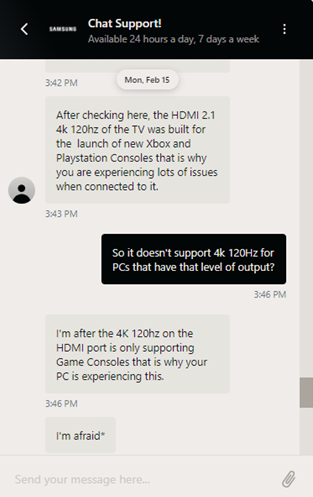 So, seeing as my prospects of actually getting my money back appear to be slim-to-none, does anyone have any idea of how I can get the PC and the TV to play nice together?
J

If what Samsung saying is true about 4k/120 only being for game mode and with consoles then that is news in itself as I've not seen them admit to that before.

As to getting it working does the Nvidia control panel have UHD TV modes as well as the PC modes?

I believe the timings for TV modes differ compared to the PC modes. E.g. on my Xbox series X 4k/60 albeit with my q85r shows on the TV info as freesync 59hz i.e. not 60hz as I believe this originates from 24p, 25p, 30p being slightly less in each case. Then when you double (or quadruple in the case of 120p) the 60hz and 120hz end up as 59 point something and 119 point something.

Jay53 said:
As to getting it working does the Nvidia control panel have UHD TV modes as well as the PC modes?
Click to expand...

It does - but the UHD TV modes only support 60Hz, unfortunately - you have to select one of the "PC" modes to get to choose between 100Hz and 120Hz. Also, text seems to go a bit "funny" (for want of a better term) a lot of the time when I select a UHD TV resolution.
J

What about labelling the hdmi input as PC?

Samsung Q70R - Why are VRR and ARC on two separate HDMI ports?