If you are talking about a version that actually fires (airsoft) then I've only ever seen kits. You also need to buy the base Thompson rifle (and shotgun in some cases).

KISSMAN said:
JUST GETTING all my movie weapons b4 the vcr bill comes on the 1st oct
Click to expand...

Off course, hopefully there should be a lot of discounts in the uk between now and then?
Visit my Home Cinema here

Hollywood Collectibles will be producing a resin replica based on an actual hero rifle in the not too distant future...

Bit of an old thread, I know, but I just found this area

Now that the VCRB is law, you might find buying a Pulse Rifle a bit more difficult... Depending on whether the vendor considers it a Realistic Imitation Firearm or not.
To be safe, your best bet is to find your local Airsoft Skirmish Site, and play the 3 games over 2 months required for membership - Then you can legally buy R.I.F.s in the UK, so long as you're ovber 18.

You do have a few choices for PRs.
Spat at Spatcave Studios was doing a solid resin version for US$175 - And his armour is well worth a look too, especially since he met Terry English ( Designer of the original armour for the movie ) last weekend, and the pair of them sat down and reworked the shoulders for ultimate comfort and accuracy
http://www.spatcave.com/spulse.htm
http://www.spatcave.com/mojarm.htm

If you want a more highly detailed version, Matsucorp Industries ( http://p067.ezboard.com/bmatsucorp ) produce a version with a solid resin Thompson, a resin grenade launcher, metal stock and barrel assembly and vac-formed plastic shrouds ( The brown/green bit ).
The price is, IIRC, about double that of the Spulse mentioned above, but the pic speaks for itself:

Then we have the firing versions.
Pretty much EVERY Airsoft firing pulse rifle you will find ( Including the one on Airsoft Scotland's website ) is the same G&P kit you've seen already.
It's got a few inaccuracies, but is nice if you can find it in stock. Don't pay more than about £300 for the kit itself though.
It's also now possible to purchase a cheaper Thompson as a base, since Tokyo Marui have some serious competition from Chinese Airsoft manufacturers these days.
http://www.landwarriorairsoft.com/acatalog/World_War_Series.html
Landwarrior have the Cyma version for £125 and it's just as good for conversion as the TM.


It's possible to mix and match...
My personal rifle consists of a TM Thompson, with a Matsucorp shroud, stock and barrel mount.
Originally I had a plastic G&P grenade launcher, but that's now been upgraded to a real-steel Spas-12 cage with a gas-powered airsoft Remington inside it - Which actually cycles shells.
The downside is, it now weighs over 8kg.

And there's a company in China producing aluminium shrouds!
If only I had two grand to spare, and arms like Schwarzenegger...


Lastly, the safest option is constructed from flour, sugar, eggs, and milk. 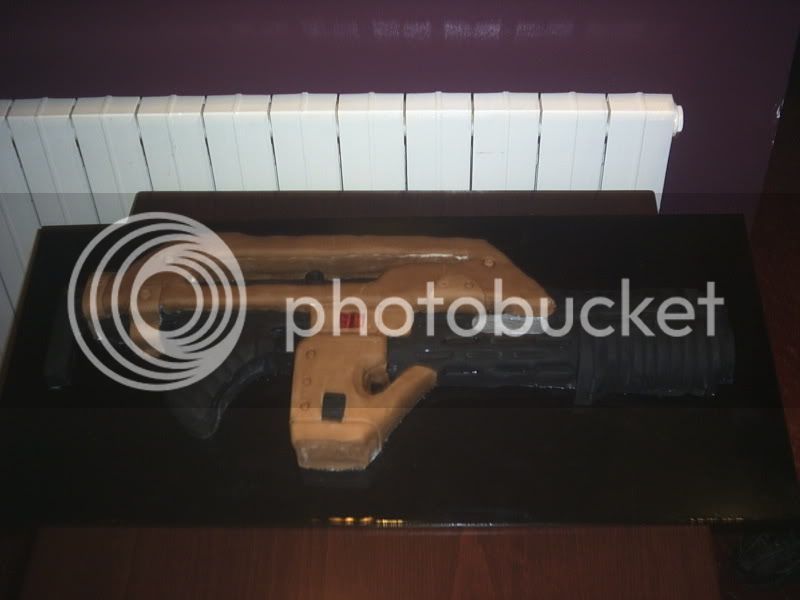 
If you want anymore info, jump over to the Aliens Legacy. The UKCM will be more than happy to assist
http://forum.alienslegacy.com/index.php

does anyone know if its legal to sell these in the uk know. ive just got a second resin kit to build and am looking to sell my old completed resin one.
Dont want to get in trouble trying to sell it
my_flickr

Where can you get one from the UK that is simply a replica for fans of the movie which can be mounted & displayed and handled, but is not for firing. Is there an official replica?
Sky Q Silver 2TB. Denon AVR-X2300W. Epos K2 front speakers. Monitor Audio Vector V10 rear speakers. Monitor Audio Vector V20 centre speaker. KEF Q400b Subwoofer. PSB Imagine XA Atmos speakers. LG OLED55C6 TV. Panasonic DMP-UB700EB Ultra HD Blu-ray. Xbox One X. PS4 Pro + VR.

it depends if you want to paint and build it. i dont know of any pre made ones.(im selling one in the classifieds)
comet miniatures do a kit for about £250. You can get a pre coloured one but need a bb gun to finnish it. About £300 for the kit and £150 and up for the bb.
my_flickr

GOT MINE after a 4 yes 4 month wait from a guy on ebay called hairybloodyfairy BE WARNED the paint job is the worst ever looks like its been painted with a pasting brush,paint drips,bristles stuck on the paint and paintbrush strokes all in equal measures fingerprints everywhewre,my 9 year old could do a better job,now sanding down for my brother to repaint it,DO NOT buy from him
optoma hd 600x,optoma 3dxl,jvc Dp10vk thx ultraamp,
mission m73 speakers,eltax atomic a8 sub
von haus screen
marantz rc5200 remote

All that has been said is that it has been produced from an original screen used prop and that it is due out in the first quarter of 2008. There has been no mention on price yet

How much did you pay for your one off eBay?

In all honesty I would be surprised to get a high quality replica for that sort of price.... it just seems too cheap. I would always be wary of a model kit made by someone.... yes I know there are some out there which do look fantastic (Coombes123 for example), but I would much rather wait for a proper licensed replica to be released and pay a little extra for it.

A licence doesn't always mean that a replica will be good.
Take the official Rubies / Don Post Star Wars helmets, for example.
A lot of those are awful, and very inaccurate!

Wayyyyyy back, in either an issue of Crash! or Your Sinclair, they had a short article about a replica Pulse Rifle.

Fired Ball bearings, the ammo counter would count down properly when BB's were fired and the grenade launcher fired some sort of Naval/yachting flares.

I know this thread is REALLY old but really want to get a replica Pulse Rifle. What are my options in 2011?, im guessing it would be a massive pain in the arse to get one from outside the UK in todays world what with terriost attacks etc. Any suggestions?
You must log in or register to reply here.

Help me value my ps5 bundle

D
Wired vs Wireless when using Airpods Max with PS5?

N
A question about this resident evil avatar.