Having wanted a projector for a while now am not sure if my room is viable for low end set up.
I have a budget of around 800£ for screen and projector.

The room is a used living room but the projector will only be used at night or late evening to watch a movie.

This is where am hoping the screen will go. Not idea. From roof to the center speaker is around 65" and from the front left and right surround speakers its around 104" so the screen would have to fit in the space 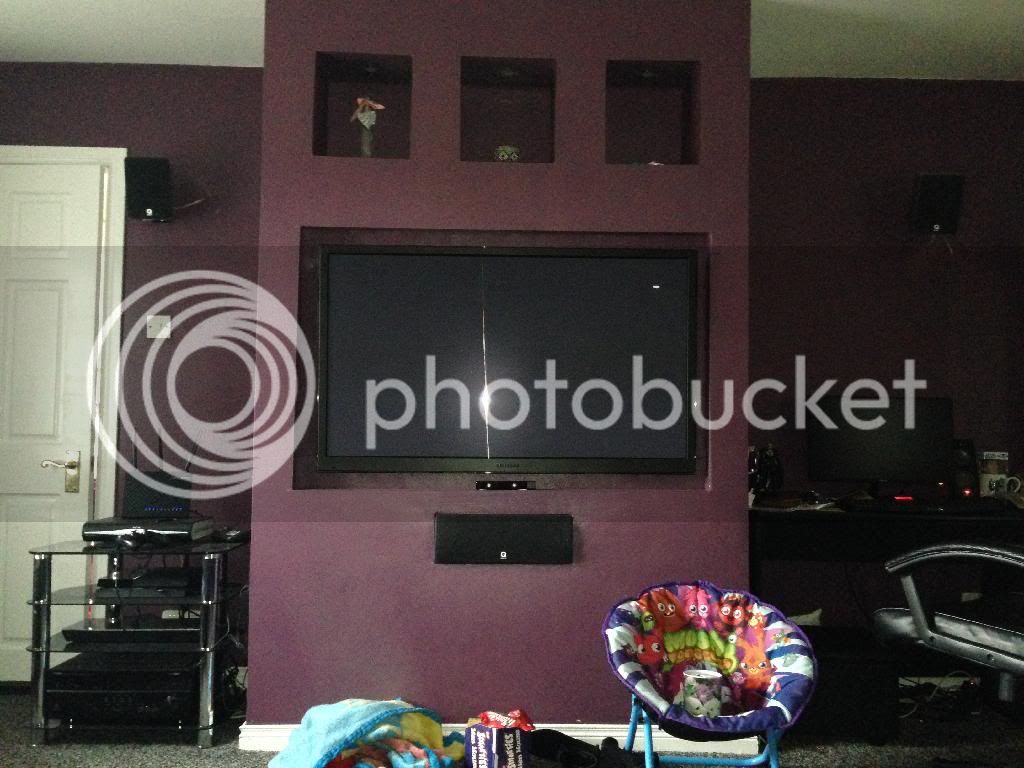 Dunno whether to just knock this idea on the head or even if it's possible
LG OLED55C6V
PS4/Xboxone
Panasonic DMP-BDT330
Yamaha RX-V673/Q Acoustics 1010i 5.1
H

I think you need to buy an used projector since you will need lens shift and cheapest new projector that has enough of it is Epson TW7200 which costs over 1500£.

You are probably going to get a pull down screen that goes in front of the current TV? THX recommended screen size for 2,6m is 86" so that should be a starting point when deciding screen size. Best way, if possible, is to buy projector first, install it and then test with white bed sheet or similar what different sizes look and feel like.

Thanks for the help with regards to the recommended screen size. I believe an 80 or 90inc screen should fit in the space without covering the speakers.

Bigpig said:
I believe the Benq w1070 has vertical lens shift? Not sure if it would be suitable trowing a 80/90" at 4m or does it have to be a precise distance from the screen?
Click to expand...

You need to get the W1070 to about three meters for a 90" picture. It has vertical lens shift but not much. Here is their calculator:
BenQ Projector Calculator
(I don't understand that lens shift part of it.)

Your best choice is probably slightly used Epson TW3200 or little older and more expensive model from Epson or Panasonic.

Mounting it on the ceiling then would save a lot of money and hassle then.
LG OLED55C6V
PS4/Xboxone
Panasonic DMP-BDT330
Yamaha RX-V673/Q Acoustics 1010i 5.1

Just back from richer sounds. They had a 92" screen on demo from almost the same sitting distance as my living room.

I think I could go up to around 100" and still feel very comfortable.
My main concerned now is not to cover my speakers when it's pulled down. The one they had on demo was 55" height wise from roof inc Case
LG OLED55C6V
PS4/Xboxone
Panasonic DMP-BDT330
Yamaha RX-V673/Q Acoustics 1010i 5.1

I've just got a manual pull down from Richer Sounds which is 106", although not sure if they ship to Northern Ireland. I'm using it with a BENQ 1070 and more than happy with it.

As Hati said further up, trying the bedsheet method first will help to make sure you're happy with where its going. We bought some black out curtain material and had it on rail that could hook up and take down for a few months. Cheap and cheerful but it did the job even if it did get a little creased

anyone especially a dealer can ship to Northern Ireland mate
Still here and still alive, stay safe everyone and stay inside until this is all over

Ok little update. Got paid so I bombed down the motorway to Belfast and picked up a 92" screen and the benq 1070. Was going to improve my budget but thought it wise to stick to my budget as this is my first venture into projectors.

Put the screen up with screw hooks turns out there is a joist almost where I needed it. Not quite happy with the position yet need to move it a little to the right

I just did a little test tonight to see if the projector worked. Used a chair to set the projector on to throw an image on the screen. It was off centre, crooked and dint fill the screen but I had a feeling of awesomeness straight away lol. Cant believe I dint get one of this years ago.....

Plan to mount the projector on the ceiling tomorrow evening after work which am not looking forward to.
Any tips or guides on how to get it centred right? Live in a bungalow so pooping into the roofspace and screwing wood into the joists should not be a problem.
LG OLED55C6V
PS4/Xboxone
Panasonic DMP-BDT330
Yamaha RX-V673/Q Acoustics 1010i 5.1

You have to get the lens central to the screen, not sure if this has any lens shift so don't make the initial mistake I made and centralise the PJ haha. It also must be horizontal so you will need a spirit level. Best way is to use a plumb line from each side of the screen and centre of the screen and get the distances and angle the same.

I got lucky there was a massive crack the whole length of the ceiling which was was centre of my screen. Just measured how much the lens was off centre and moved the mount according. Used a bit of wood which I cut and screwed in-between the joists.

But omg lens shift is such an amazing feature. The benq is only 5% vert but I dint have to go near that keystroke thing.

Watched avengers last night and I don't think I would watch a movie any other way now.

I have dark carpet, white ceiling, white doors, two windows, stone walls but the feature wall is purple and the picture is amazing in my eyes.

The install is not the greatest but am only renting the house off my sister. So kept any holes near the wall and used trunking to hide the cables as much as possible.
LG OLED55C6V
PS4/Xboxone
Panasonic DMP-BDT330
Yamaha RX-V673/Q Acoustics 1010i 5.1

Great news mate glad you are happy. Many years of large screen viewing.

Advice on a projector screen