I have had SKY+HD installed since Friday 26th September 2008. The engineer called, paired the card and all seemed OK and was working fine until Sunday 28th September when the problems started.

On four occasions during sunday the box crashed showing just a green screen on the television, the power light on the box was on but i could not get it to respond to the buttons on the box or the remote, I had to turn off the power and restart. I phoned SkY and was asked to do the same procedure that I have already done apart from being asked to remove the feeds to the box. All seemed fine after that.

Monday: I had one failed recording - Techincal Fault 12. Box was in standby as expected but would not power on with either the remote or buttons on the box.

Tues: All seemed fine apart from not able to get the box out of standby without power down etc.

Wedensday: Box in standby as expected, unable to start box without going through the routine. Had a failed recording due to power cut! Had the green screen problem twice that evening.

There was no power cut on either of the two days as my various clocks would have needed resetting.

It is a new pace box and i have done all the suggestions i have read on this forum, turning off auto standy, Anytime etc,etc. Wether it is on auto standby or if i have put it into standby, it refuses to wake up in the morning unless i go through the usual...

Phoned sky this morning explained the problems that I am having with this box only to be told that I did not have SKY+HD installed. Anyway managed to convince them that I did have it installed she then told me the engineer had not paired the card, which he did as I was there when the engineer phoned sky and done it.

Asked if they could swap the box and was told that she could not do this and she would have to book a service call. So I asked could she book me one, she then said she would put me on hold and have a word with someone else only to come back a couple of minutes later to say she could not book a call due to techincal problems and that someone will call in the next 24/48 hours!

I told them I was not happy and this matter is not sorted out I will cancel my subscription.

Sorry about the rant but just had release my frustration dealing with Sky!
Last edited: Oct 2, 2008

With the horrendous probs you've been having I'd say you have quite patient!!!

Anyway the least you should expect is a new box at a service call out. Stick to your guns as you are still within the 30 days.

(Also if sometimes come across an obstinate person on the other side of the line then end the call and try again. A nicer CS person sometimes can make all the difference!
universal GamerTag : drnoGAMER
my opinions expressed here do not represent those of the AVForums or its associated websites
S

Then he told me that the earliest date available was for a service call was Thursday 16th October! Lost my temper then! He finally admitted that the box was faulty and would be replaced and the problems were SKY's fault and he understood the reasons i was so angry!

The outcome is that because it SKY's fault he would need to speak to his manager to see if a earlier service call could be made and that someone would phone back to keep me inform. We will have to wait and see...

Told him that if this problem is not resolved by tomorrow afternoon (which is the only time I can be available) i will cancel my subscription and expect a full refund for installation and box. He said that I was perfectly entitled to do that!

Am I the only one having these problems with Sky+HD and the CS at sky? Or is it a general thing?
Last edited: Oct 2, 2008

smooth750 said:
Am I the only one having these problems with Sky+HD and the CS at sky? Or is it a general thing?
Click to expand...

Their CS is a total joke.
Two weeks ago, I realised they were still billing me for a third box, which was deactivated last year (used as a freeview box only now).
So they are owe me £120.00
So I called them, they confirmed the error.
They offered to credit my account, I told them I wanted a refund to my bank account.
They then said they had a maximum refund amount of £30, so it would have to be done in 4 x £30 lots, a couple of days apart.
Two weeks later, I notice only 1 x £30 has appeared in my account.
So I call them again, they then tell me they have "just realised" I'm owe them £48 box office from last year, so they have deducted this and will now only refund the difference.
I barely use box office, so I'm waiting for an explanation for this!
In the meantime, I noticed they are still taking £10 a month too much from my bank account.

I've had an apology from several operators, but I really think I should get some sort of compensation for them having £120 of my money for a year.

TBH though, I cannot be bothered asking them, when the average waiting time for every call is 33 minutes....
Parklife
S

smooth750 said:
Am I the only one having these problems with Sky+HD and the CS at sky? Or is it a general thing?
Click to expand...

No you're not. Recently I have seen a serious degradation in the quality of Sky's customer support and I can only conclude that they are being snowed under with complaints creating a vicious spiral of inefficiency, poor communication and long telephone queues.

For me, the worst problem has been that none of the agents you eventually get to speak to, even in their "Customer Care" section will admit to having access to email correspondence. Thus, after being instructed to write in to mysky via email in order to set in motion an HD cancellation under the 30-day cooling off terms, it is then impossible to speak to anyone who might have received, seen or replied to, that email.

I suspect that they deliberately obfuscate in order to slow down cancellations or refunds in the hope that some people will just give up or forget about it.

Yesterday, after threatening to cancel my total Sky sub, I was eventually put through to someone who claimed that he was part of a new team charged with seeing customer complaints through to a conclusion on the telephone without forcing people to write in. It wasn't a big improvement but he did succeed at least in buying some more time by bribing me with a £100 credit.

Compare my thread, "Do Sky have ANY competent staff?":
http://www.avforums.com/forums/showthread.php?t=833170


It's taken them until today to e-mail back and then only with
"I will not attempt to justify the unsatisfactory customer service you received"
and still refusing what I asked for - which involved paying them MORE than I do now!

My main Sky Box is Sky+ in the living room and have standard sky in an entertainment room.

The engineer was superb.

He noticed that the twin feed to the sky+ was shody (two seperate feeds). He took this down and fitted a neat twin feed. I also informed him that my + box has been playing up....no problem, he changed it for a brand new one.

So, not only have I now got HD, I now have a very neatly installed brand new + box

At the moment, I am pleased with my instillation
You Lives and Learns!!!

Oh, I forgot, the engineer that installed SKY+ in our bedroom also did this to the outside brickwork, without mentioning it or attempting to repair it/cover it up.
He didn't even seal the hole, so one could feel a draft in the bedroom.
I had to go up a ladder to seal it myself, until another engineer came back with a plastic plate to cover it up.
Even then, he only had white plates, so I had to go up a ladder again to paint it brown... 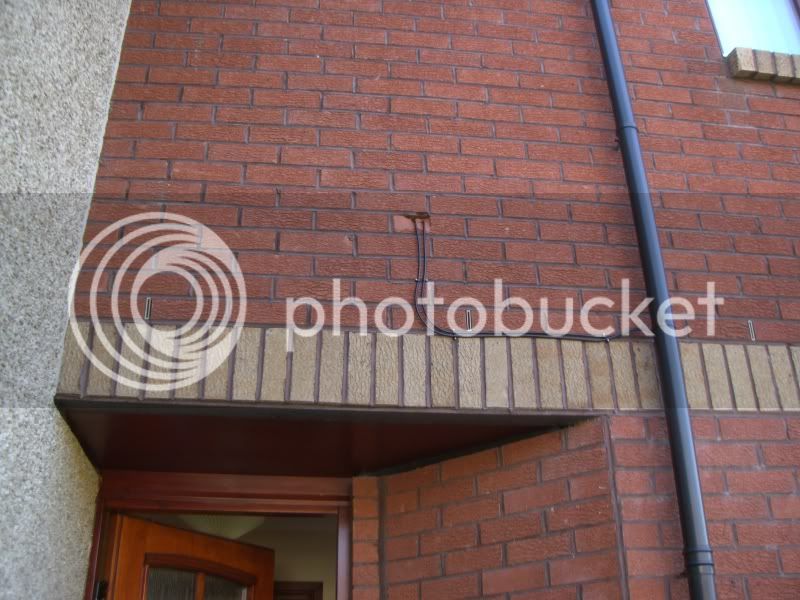 What a shoddy installation, i hope you complained!

Just to add to my list of problems with my SKY+HD box another fault manisfested itself this morning.

Put the box into standby manaully while I took my young son to school today. After I returned I did not switch the back on straight away. Anyway after about 3 hours in standby I turned it on only to find that a message to say that there was no satellite signal being received! Checked the signal strength and quality and the bars were showing well over three-quarters on both LNB inputs.

It seems to me that this box has a problem when it has been is standby for sometime whereby it drops the input signal to the box but is not reported by the strength/quality bars. Once I done a power cycle all was fine again.

Needless to say it was yet another phone call to sky, my 6th in 7 days!

Seriously think of going back to my standard box which has served me for many years without a hiccup.

smooth750 said:
What a shoddy installation, i hope you complained!
Click to expand...

I wrote them a letter and gave them photos.
Needless to say, I've heard nothing since.
Parklife
S

smooth750 said:
no satellite signal being received!
Click to expand...

I can replicate this message. Every time that I click on a 'reminder' programme in the planner which has already started, this message is displayed for about a minute before the programme tunes in.

This is a worry. Pace box installed this morning. Hardly used it, but has already 'froze' displaying a green screen. Full power off & restart has cured for now....
L

Its turning out that the long awaited, and everyone getting exited about pace box isnt so good after all.

On the other hand my new samsung. Been absolutely brilliant, cant fault 1 thing with it.
R

lew123 said:
Its turning out that the long awaited, and everyone getting exited about pace box isnt so good after all.

On the other hand my new samsung. Been absolutely brilliant, cant fault 1 thing with it.
Click to expand...

Have to agree with you, Samsung is excellent
You must log in or register to reply here.