I know it's probibly the last thing you guys want to do, but i could really do with some help choosing the right components for an HTPC i'm building..

In return, i'll catalogue the build with all the problems/nuances and take loads of pictures

Righto, well... before i get started on what i want, i should first say what i want it for.


I recently bought myself a nice 5.1 speaker set-up (Mordaunt Short Mezzo collection), and i've been listening to some of my music through it.

Currently i've been listening to mp3's over phono, because the only other input avalible on my AMP is HDMI (and i have nothing which will output audio through HDMI) .. and to be honest it's terrible. Just... just rubbish.

What i want to be able to do is rip my CD's in high-quality and play them over the HDMI, as the AMP understands all the various digital standards.
So i want to have on my media center all my albums, all in lossless :]

The second thing i want this HTPC to do it play high-def videos, such as blue-ray movies, as well as be always-on (to download TV shows i usually watch in high-def, as soon as they come out in America)

So to summerize:
Must have HDMI out and support high quality audio/video (1080p movies with high-quality 5.1 audio)
Must have a large hard drive
Must be able to take never being turned off ever (well, maybe once a month)
Must be reaaaally quite.

Other than that, i'm flexible haha

To acheive this, i did a bit of research, and came up with this spec: 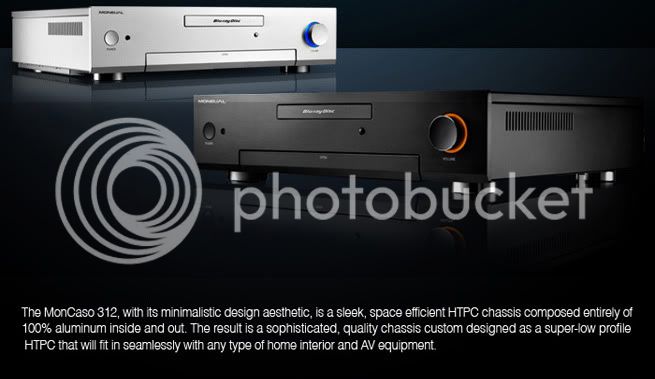 I freaking LOVE this case.
Liturally, i would have its babies if i had the correct corresponding genitalia.

It's a Lanparty mobo so i imagine it should be pretty good - plus it has HDMI out which i assume can do 1080p and high-quality audio with it's in-built GPU. 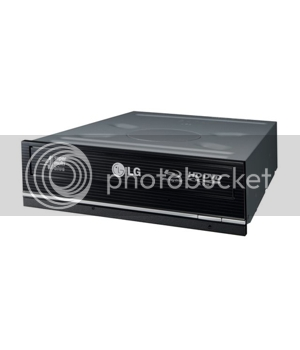 It plays & writes Blueray, DVD, CD - as well as being able to play HD discs.

Only problem is.. i'm not sure if it fits in this tiny Chassis :/

Why modular?
Well, i hear that as there's so little room in this case, the less cables you have clogging up the airflow, the better.


As for the CPU and the RAM - not a clue.
It won't be doing anything too intensive. Just playing movies and downloading the odd YouTube video.

OS:
I will probibly put BSD/Linux on it, to really keep it as stable and low-power as possible, so it helps if everything has BSD/Linux drivers. It's not a deal-breaker.

I'm thinking of running Boxee on it as well, because it looks like a really nice GUI for flicking through my music albums and videos.

What do you guys think about this set up?

It'll probibly cost around £500 all in, maybe up to £600 if i buy a new/good processor and ram and hard drive (and don't use the previous-generation stuff that i have)

What do you guys think?
Any feedback is REALLY appreciated :3

that case does look awesome... if I was you I would being going for a 9400 motherboard + intel cpu combo as the 9400 is much more powerful than the ati solutions and it does 24p properly which ati seems to have alot of issue with... I would rather get a corsair psu rather then a coolermaster but thats just a personal preference and as far as the OS/Software goes if you want to make it a linux system the 9400 is a better solution as you can then make use of its h/w acceleration which I dont believe ati have under linux and for the software XBMC is a great media center software although it doesn't handle live tv and the Aeon Stark skin for it looks awesome
HTPCProject - Your Source for Everything HTPC
O

Thanks Crazyfool, you've been really helpful :3

So you think i should go with a dedicated graphics card like the 9400GT?

There are so many rebranded types -___-;

Looks pretty good - but you're sure that i couldn't do it with an internal GPU?

Comments on ebuyer suggest that it's a little noisey.. but ah, perhaps different brands with different fans will be less noisey.

What mATX mobo and CPU would you recommend then?


BTW, i had a look at Aeon Stark and i'm *very* impressed
I'll definatly choose that over Boxee
C

sorry I wasn't clear... what I meant was go for a board with an intergrated 9400, atm there are a couple available... this seems to be the most popular one... would be fine paired with something like a E5200
HTPCProject - Your Source for Everything HTPC
O

I took your advice Crazyfool and ordered everything except the case (which i'm finding really difficult to get hold of anywhere in Europe!
A swedish site apparently has a few left in stock, but they don't speak much english

As promised, i'll take pictures and whatnot for others who are using this case and want to see if everything fits - or others simply wishing to build an HTPC.
O

Got the case (eventually) from pc-cooling.de

Although they are a German company, they where extreamly helpful via e-mail and spoke perfect English.

I'm glad i bought it from them than wait another month and a half and get it from silent-pc
Anywho, here's what i ended up getting from ebuyer:

I had some old DDR2 ram kicking about (2x 1Gb) , and a Intel Duo 2 (i've already forgot the model number... psh, who cares this is just an HTPC. you really don't need a powerful CPU unless you're encoding which i never do as i only use it to play movies / music)

The CPU fan is somewhat of an issue though... as the CPU and RAM came from a server, i also had to use a Dynatron P35G CPU fan which is generally only used for servers (it's like a jet engine, and has very directed airflow, which is out the back in most servers, but the side in the case of this build)

So i liturally just bought a Zalman CNPS8700-LED, which from what i understand runs very quite (which tbh, is more important on a HTPC build than anything else), and as it blows air out in all directions should cool down the GPU heatsink somewhat too.

But it goes without saying, as i havn't recieved it yet I HAVE NO IDEA IF IT FITS!

I'll report back when it arrives of course, but if someone else is skim reading this and just assumes it fits because i bought it - please don't buy it!

So.. what can i say about this build to others who may be attempting it?

1) There are two cables in this case which use half a usb jack - ie four pins.

Check the motherboard manual to see which way they should go, but basically you will be putting the four holed plug and the 3+1 holed plug into a single USB terminal on the mobo. Interesting, because i never knew you could do that...

2) Contrary to what people say elsewhere, there is quite a bit of space in this case.

Any optical drive will fit provided you use RAM without a riser on it (a heat sink that sticks up above the ram). There's quite a bit of clearance if your RAM doesn't have a riser, so really, get whatever drive you want.

3) You will need to take all the drive bays out before putting the mobo in, but if you're fitting a decent cpu fan, make sure you put the backplate behind the mobo before you screw it (and all the drive bays) back down. realy PITA if you forget.

4) Many HTPCs i've seen look like computers. They have obvious-looking optical drive bays (ie, an outline of the whole drive bay can be seen, not just the tray).
This case looks impressive in pictures, but once you have an actual PC inside it, it really just blows my mind to think that that's a full PC and not some audio/video equipment!

5) Do NOT put the optical drive in the case without first removing the front face of the tray (normally slides off once you pull back some clips)
The tray wont fit through the hole in the case.

Once removed, install the optical drive into the case, then take out the solid metal faceplace provided (only one is provided, which says 'Blu-ray Disc [tm]'), peel off the back side of the double sticky tape, and stick it onto the bare tray face when it's in the case.

Don't **** this up because that glu is *really* sticky, and if you mount the faceplate too low, it will catch every time the tray is closed (and will wear out / break the tray motor)

6) Make sure you get a modular PSU, whatever you do, because there is so little room in this case as it is, you need all the space / airflow you can get!

8) Using this particular mobo, i struggled to get audio out of the HDMI.
When it did, it was in stereo, which is a bit **** considering it boasts 7.1.
I managed to get digital audio out of the optical out, but again i had to choose what sort of speakers i had, and let the onboard soundcard do all the processing - but i bought an amp for that! Just give me Pro Logic II out or something, and leave the enhancing to the things downstream >_<

I've only had a little play with it, so surely it must be possible... but that doesn't really have anything to do with the case

9) When installing the drivers for the board, do NOT use the official nVidea ones. They don't work properly.
Instead, first install the ethernet driver using device manager and searching the CD.
Then update to SP3.
Then once all the windows updates are installed, go back and use the Gigabyte installer - and make sure you install over anything the windows installer added - even if it's older!
Once those are all done, then install the latest chipset driver from windows update again (optional hardware) - do NOT use the one on the nVidea website!

Also, installing the drivers off the CD before updating to atleast SP2 will break the whole system and you'll have to re-install the OS again from scratch.

I have yet to install Gentoo, but again that's not really anything concerning this build specifically.
You must log in or register to reply here.