12harry said:
I've seem time-lapse options which max out at 5 seconds ( DYOR) . . . . how about 5 hours as a sensible upper limit . . . if you are watching seaside tides 5 seconds really is just too short an interval . . . but then I'm often wrong
Click to expand...

The time lapse options on the 750 are:-
[1 SECOND]/[10 SECONDS]/[30 SECONDS]/[1 MINUTE]/[2 MINUTES] so at the highest setting 1 second of video equals 50 minutes. So a full cycle would equal approx. 15 seconds at 25fps.
As for self timers. Are they not designed so you can run around and get your picture in the frame?
I used to be indecisive, now I'm not so sure.

Thanks for that info.... I see in the Pana PFD for FZ1000 (DYOR) it shows similar extensive interval and durations - very good...but the section I found after considerable work on the Self-timer told me to set it using the on-screen details . . . not really useful as I would like something longer than 10sec, although for shake-free supported- Stills; 2 sec is long enough.
I find the Pana PDF "Contents" is organised in page-order, so it's not any help if you want a topic like Self-timer ( under "S" ), since you have to troll through the manual to wherever they think it should be.
I don't recall the camera that had the 5-sec limit for Time-Lapse . . .
But it's not easy to find Camcorders ( which take stills) that have a comprehensive Stills self-timer . . .and I just wonder why - when pages of the PDF are devoted to the various ways of Playback . . . FINE, so long as you have the picture in the first place.

I bought a "wireless" remote for my NEX5 Stills camera and this allows triggering ( from the front) using IR ( so it must be pointing exactly right)..... but they didn't include any means of "interval" - possibly because it was likely you'd have put the thing down, as it was about to fire. I considered a fibre-optic connection, with a PIC to perform intervals, (decoding the IR device to give me the "Release-Code") - but soon gave up.
Canon users are better served because their DSLRs are either "Wired" (or radio?) . . . but then their cameras are twice the price.

The 750 does have the 2 sec and 10 sec self timer BUT it also has the App which will fire the shutter remotely from my Smartphone. I would not know how to programme the self timer to be operated at regular intervals from the App but as I have such a range of times with the time lapse option, I see no need to set up a separate programming system.
I used to be indecisive, now I'm not so sure.

My 15yo son had told me that he wasn't going to play footbll at all in 2018 as he wanted to concentrate on his studies. This was seen as a great pity, both by my wife and I, as his team had won their Div 3 Championship & Grand Final in 2016, and Div 2 Grand Final in 2017. Personally, I've really enjoyed filming them for the last 2 yrs.

Anyway, under strong pressure for one of his coaches, he has relented and agreed to play in their U16 team, probably at Div 1 level.

So this means I can now give myself some freedom to add a little more equipment. Ideally, I'd like to buy a 2nd-hand HC-V5nn or HC-V7nn, or a new one if they're clearing old stock, and use this solely as a 2nd MF goalcam, so I could cover both goal ends from the side. But I'm prepared to wait until a good deal comes along.

Today, I just got word of a what looks like a closeout deal on the Saramonic Vmic with integrated microSD recorder:

Here's a video review of this recorder video mic:


This year, my audio setup for soccer evolved to: 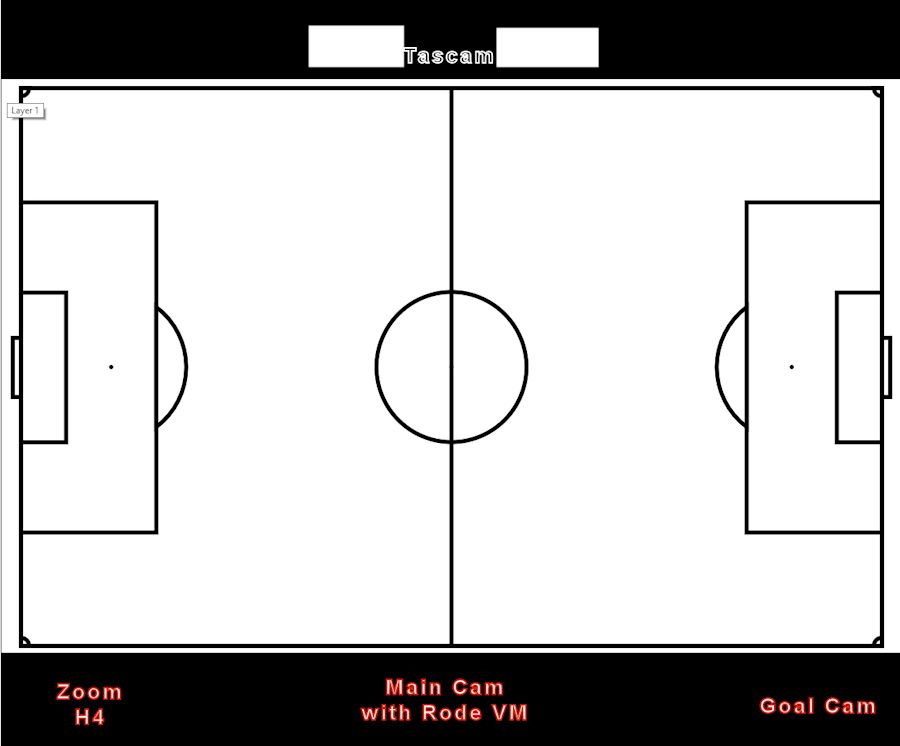 Here, a Tascam DR-2d stereo recorder is between the two teams' bunkers and opposite the camera.

On the near-side, a Rode VM is the mono pickup that pans with the camera, with a Zoom H4 stereo recorder on the L on a short tripod (only using the R-channel), and a static HC-V750 goalcam, operating in fixed MF, with its stereo pair in a tripod on the R (only using the L-channel).

So, this year, I'll probably start with:


Code:
By having short shotguns for all 3 near-side mics I'm hoping to reduce the pickup of crowd and traffic noise.

I doubt that the foam windsocks they come with will be sufficient. So I'll probably build faux-fur windmuffs for these new mics.

If they work OK, I may also try this configuration:

low light and high frame rates. A waste of time and money?