I just got a gaming pc last week mainly for this game and its coming to console LOL. There is a closed beta for this started last week on pc this is the next big thing on the pc and there raving about it.

I signed up for the beta but there is huge demand for this game.

I have been keeping an eye on it after you mentioned it to me. Looks great.
Glad it's coming to Xbox One also.

Yes it is like TF2 alot thats not a bad thing though. 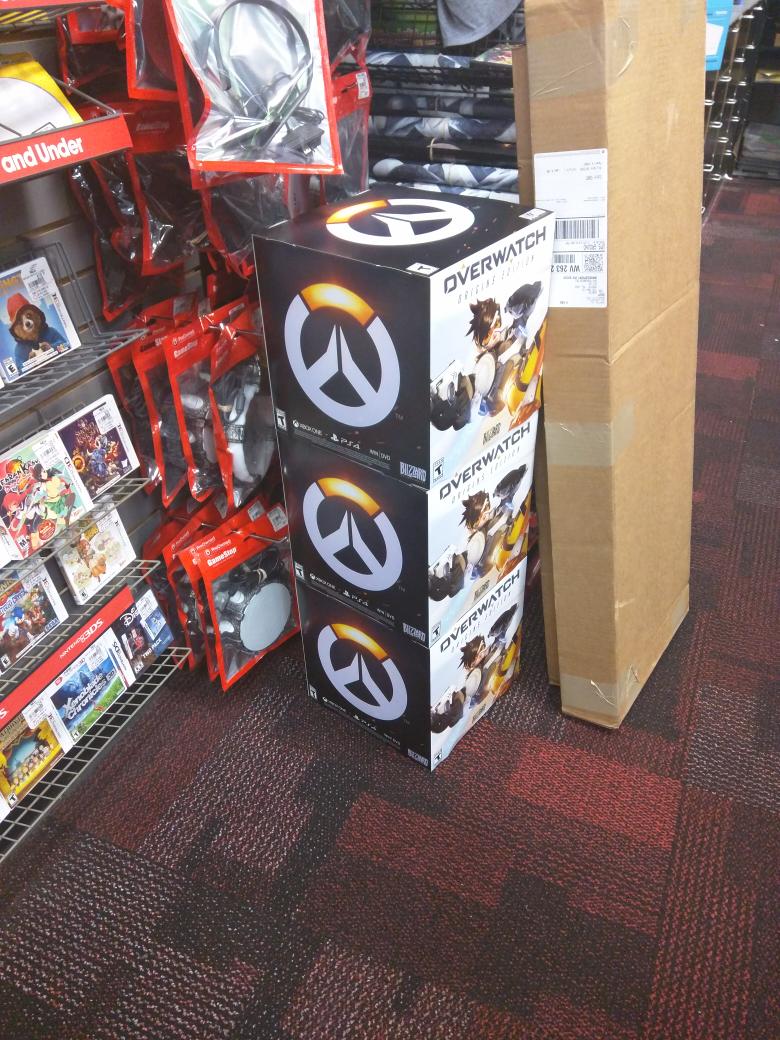 I have to say that this looks very good. Only problem I have now, with so many good MP shooters about it's very difficult to find time to appreciate them all!

In 4k no hud awesome gameplay

YES great news this game is going to be great fun

Open Beta Coming to PC, PS4™, and Xbox One
By Blizzard Entertainment 2 hours ago 63

Want a chance to check out Overwatch™ ahead of its May 24 launch? Form a team of friends and try out the team shooter of tomorrow in the Overwatch Open Beta, coming in early May to PC, PS4™, and Xbox One!

As a newly added bonus, if you pre-purchase or preorder Overwatch for any platform at www.buyoverwatch.com, you'll also get early access to the Open Beta for you and a friend from May 3–4. After that, everyone will have a chance to play free during an all-access Open Beta period from May 5–9.

PC, PS4, and Xbox One players alike will be able to experience the intense action of Overwatch for themselves, including all of our launch-day heroes and maps. Read on below for more information, and be sure to stay tuned for additional details.

To get a two-day head start in the Open Beta for you and a friend on May 3–4, simply pre-purchase or preorder any edition of Overwatch by April 29 through one of the methods below.

BATTLE.NET SHOP:
Pre-purchase the digital version of Overwatch or Overwatch: Origins Edition for PC via the Battle.net Shop. We'll send two early-access keys (PC) to your Battle.net email address—one for you and one for a friend—before the Open Beta begins.

If you've already pre-purchased digitally through Battle.net, you're good to go. We'll send you two keys before the Open Beta early-access period gets started.

RETAIL STORES:
Pre-purchase or preorder any version of Overwatch at a participating retailer, and your retailer will give you two Open Beta early-access keys for your specific platform before the early access period begins—one key for you, and one for a friend. Distribution varies by retailer, so check with them for additional details.

To find a participating retailer in North America, visit www.buyoverwatch.com. If you don't see your favorite store listed, check with them to find out if they're taking part in this promo.

If you previously pre-ordered or pre-purchased Overwatch at a participating retailer, contact your store to find out how to receive your early-access keys.

PLAYSTATION STORE & XBOX STORE – COMING SOON:
Preorder the PS4 version or pre-purchase the Xbox One version of Overwatch: Origins Edition digitally through the PlayStation Store or Xbox Store (once available), and you'll automatically be flagged for early access to the Open Beta on your console.

Before the Open Beta early-access period begins, you’ll also receive one additional early-access key (valid only for the same platform).


And don't forget: In addition to receiving early access to the Open Beta, when you pre-purchase or preorder any version of Overwatch, you'll also get the Noire Widowmaker skin at launch! Visit www.buyoverwatch.com for more details.


Q. How will I receive my early access key from a retailer?
A. Your retailer will provide you with early access keys for your chosen platform. Distribution timing and methods vary by platform and retailer, so check with your favorite store for details.


Q. Can I redeem my early access keys right away once I receive them?
A. Early access keys on PC can be redeemed immediately through Battle.net Account Management ("Games & Codes" > "Add a Game Key").


Early access keys on PlayStation 4 and Xbox One will be redeemable beginning on May 3, 2016. Please be sure to save your key(s) and redeem them on May 3 to download and play the game.


Q. Who should I contact if I am having trouble redeeming my early access key?
A. If you're having issues with redeeming your early access key(s), please reach out to whomever you pre-purchased or preordered from for assistance.


Q. What is the exact time the Open Beta will begin in my region?
A. To be determined! We'll be sure to share regional dates and times for the Open Beta (including the early access portion of the Open Beta) once those details have been locked down.


Q. What game content will be available during the Open Beta?
A. All players will have access to the full roster of 21 heroes, along with every map that will be available at launch. We want players to get a feel for the complete Overwatch experience!


Q. What if I have a question about the Open Beta that hasn't been answered?
A.Stay tuned! We'll be sharing more information about the Open Beta in the coming weeks. In the meantime, please feel free to tweet @PlayOverwatch with your question if you'd like to see it answered in one of our future updates.
My Xbox one and Ps4 Gamertag Se777eN
LG OLED55B6V OLED HDR 4K Ultra HD| Xbox one X S|Playstation 4 pro| LucidSounds LS30 wireless| Sky Q |​

made by blizzard its going to be fooking insane . Seems as though its already incredibly balanced aswell!

I will be playing doom instead of this.

I will be playing both. All the mother fudgeing games !

First console gameplay its on ps4 though looks class shame about the sh*t res on YT.

Some xbox one gameplay

Play Overwatch® FREE May 5–9 During the Open Beta

Prepare to clash on the battlefields of tomorrow and take your place in the ranks of Overwatch®—a legendary force of soldiers, scientists, adventurers, and oddities—in the Open Beta! Assemble your friends and try out the ultimate team-based shooter for FREE May 5–9 on PC, PlayStation® 4, and Xbox One.


Battle.net desktop app, if you haven't already, and launch it.
Step 2: Create a FREE Battle.net account, or log in with an existing account.
Step 3: Click the "Overwatch" icon, located on the left-hand side of the Battle.net desktop app.
Step 4: Select your region from the drop-down menu, then click "Install" to begin the installation process.
Step 5: Once installed, click "Play" to begin!

FOR PLAYSTATION 4:
Step 1: Turn on your PlayStation 4 and log in to your preferred local user.
Step 2: Go to PlayStation Store and select "Search" from the top menu.
Step 3: In the search field, type in "Overwatch."
Step 4: Select "Overwatch Open Beta" from the search results and then click "Download."
Step 5: Once the download and installation process is complete, click "Start" to begin!

FOR XBOX ONE:
Step 1: Turn on your Xbox One and log in to your Xbox Live account.
Step 2: Go to the Xbox One Store, select "Games," then select "Search All Games."
Step 3: In the search field, type in "Overwatch."
Step 4: Select "Overwatch Open Beta" from the search results and then click "Download."
Step 5: Once the download and installation process is complete, click "Launch" to begin!


The Overwatch Open Beta client will be available for download on all supported platforms beginning at the designated launch times listed above: on May 3 (for Early Access) and on May 5 (for All Access).


Q. How many heroes are available in Overwatch?
A. There are 21 heroes available to play in Overwatch! To learn more about these heroes, click here.


Q. How many players does each mode support?
A. All game modes and maps currently support 12 players in a 6v6 format.


Q. What different play modes are available in Overwatch?
A. There are a variety of ways to play Overwatch!

Players can also learn the ropes in a series of training modes: Tutorial, Practice Range, and Practice vs. AI.


Q. Will there be any sort of maintenance planned during the Open Beta?
A. There's no downtime or maintenance currently planned for the Open Beta on any platform. If this plan changes at any point, we'll be sure to provide information about major service interruptions in the official beta forums. For additional status updates, be sure to follow @PlayOverwatch on Twitter.


Q. What are the PC system requirements for the Open Beta?
A. See below!

For the best performance, please be sure to update to the latest drivers available for your graphics card.


Q. Can I stream or create content about the game during the Open Beta?
A. Absolutely! There is no non-disclosure agreement (NDA) for the Open Beta. You are encouraged to take screenshots, livestream your play sessions, record feedback videos—whatever your heart desires.


Q. Can I run tournaments with a prize pool during the Open Beta?
A. You are welcome to run tournaments (with or without prize pools). Prior to the game's launch, however, we will not be issuing tournament licenses for large-scale events with prize pools over $10k. For smaller events, please review our Community Tournament Guidelines before you begin planning to make sure your community tournament is in compliance.

If you would like to begin discussing your tournament plans for after game launch, or have any other questions, feel free to reach out to [email protected] any time.


Q. What is the business model for Overwatch?
A. Overwatch is currently available for pre-purchase on Windows PC, PlayStation 4, and Xbox One. For more information, visit www.buyoverwatch.com.

Wow basically the full game, im impressed! Loooking forward to it, i like the look of this!
Guns

Music: Now i just sit in silence |Games: Rip and tear, until it is done |TV: Jesus, what kind of a preacher are you!?
My opinions expressed here are not necessarily those of the AV Forums or the associated websites​

Can't wait to give it a try. Clearly got some confidence in it to pretty much make the whole thing available during the beta.

I was reading that for people who get Early Access also get another Code for a Friend, so if anyone does get any spare Early Access Codes it would be appreciated.

This is my most wanted game this year (yes more than battlefield 5) i have waited 2 years for this i got a gaming pc rig as i though it would be pc only then they announce it on console 2 weeks after i get me bloody pc. I signed up for the beta day one and not got in the beta or the beta weekends.

I have watched alot of this game though and this game is more than a beta the game is very solid game that just needs a few tweaks.The meta is going to be different on console to pc and they have all ready nerfed a few hero's on console. I can say 76 getting used alot as he is very easy to use and i can see him getting nerfed on console.

If you have never seen anything on this game there is plenty of footage on YT watch it this game is going to be huge it all ready is on PC.

Here are a few tips on hero's to use to get started.

Yep, really looking forward to this. It is something much needed on console.

O2 priority moment app has a free code for early Beta access for PS4 and Xbox One, started at 9am this morning.
You must log in or register to reply here.

T
Trouble moving profile from old XBOX one to another newer XBOX one S.