I last posted here over a year ago - we were in the process of purchasing/selling...and it was right old headache. I think we went through pretty much every pitfall when it comes to house selling/buying (subsidence on survey, 4/5 houses falling through due to chain etc).

Not sure whether this thread belongs in the members gallery yet - still embryonic in reality but work has started.
Due to tight budget I'm doing a fair amount myself and then only once I'm confident I know what I'm doing. It goes without saying this forum has been the main source of inspiration...I've been blown away myriad times by most of the work on these boards.
My last project (mini project in our old house) got the ball rolling...but I guess it's time to step up a little.

I've taken a fair few pics so far, but time constraints and my main computer cracking up (now finally fixed) meant these pics have been locked in dark hard drives and 'smartphones'

I'll go back into this thread and add pics as I go along (it won't be a quick process) and I'm hoping for even more inspiration, help and advice...in turn I hope I can pass on anything I myself have learned (and grandly cocked up!).

In summary the plan is to refurb every room (bar the kitchen - for the time being - probably the only room that was completed before we purchased) and carry out rewire and networking to every room.
Essentially - for most rooms:

*TV connected to network and main hub feeding music library (iTunes) and DVD collection and connected to Virgin/Sky cable television - mostly stereo in ceiling speakers (aside from main living room which will be 6:1 surround (existing kit). Unfortunately, although I did a fair bit of research a year or two back, my eye was taken off the ball due to the prolonged moving house process...bit behind on the latest knowledge - CAT5e and CO-AX still recommended? As for TVs'...I had a lovely Panny 42" Viera Plasma we had to leave as part of the house sale...we currently squint as we huddle around a portable telly in the living room...

Anyway...I'll plan this out as I go along. The lighting is pretty poor and the double socket capacity not really suited to the modern home. With a friend carrying out a 'design' for me, I hope to get a rewire carried out pretty quickly. It's probably better to run an entirely new network in running alongside the old one then switch over one weekend (I won't be doing that bit on the consumer unit end). I've made enquiries into moving the electrical inlet - currently enters the downstairs bathroom...I'd be suprised if current regs allowed that...and it's a tight enough squeeze in there as it is.

* Lighting - run a whole host of new lighting in all rooms. I've actually just installed two outdoor lights using the GU10 LED's - impressed with these newer gen bulbs - tempted to use them in some rooms (I'm partial to the halogen spots - might use those till I'm convinced LEDs in places like living rooms are good to go.
Controlled (Lutron et al) a possibility too.
I think if a new consumer unit is installed I'll connect them at the time (and have fire/alarm system on their own MCB too).

The family (incl 3 kids) is away this week so I'm having a go at attacking the two reception rooms. The floor (pretty sure is concrete) is on the wonk - may need levelling with compound...or it might just be the laminate down at the moment hasn't been put down correctly. I'm taking the ceiling down - lath and plaster The current one is wallpapered and has been peppered with too many, large sized spot lights. Will also need it down for routing cabling.

Half excited...half in panic mode now folks....I'll have another route around the latest projects on here for inspiration.

Will post a couple of pics shortly (most of the work so far is shifting two 8 yard skips worth of rubble from the garden...and clearing around ten 30/40 foot tall trees from the side of the house.

Here's a quick couple of snaps of the offending two reception rooms - they don't look too bad here, but in reality the floor isn't much cops (and slopes) and several generations of wall covering have been papered over with thick, shoddily placed 'underpaper'?!

Plan: take up floor (almost certain it's a concrete floor), level if need be (levelling compound most likely), take ceiling down, rewire whilst down and plan the lighting. The doors (not at all safety glass) replaced with bi folds - possible a larger lintel required and the gap opening up a bit.

Struggling to find a solution to the bay window hang (those blinds have already been replaced with wooden venetian by the way). I originally intended to have a dropped 'border' around the ceiling, with low level lighting providing a 'halo' in the room. Not sure if this is possible...design brick wall at the moment!!

In the dining room/living room (which will indeed be another living room and mirror, AV gear, the other room - also used as guest room with guest bed) I'm going to drop the ceiling a small bit over the dining table (imagine the same size as the dining table hanging a foot down) - having hanging pendants from this and add the halo effect lighting around the rim - sound ok? 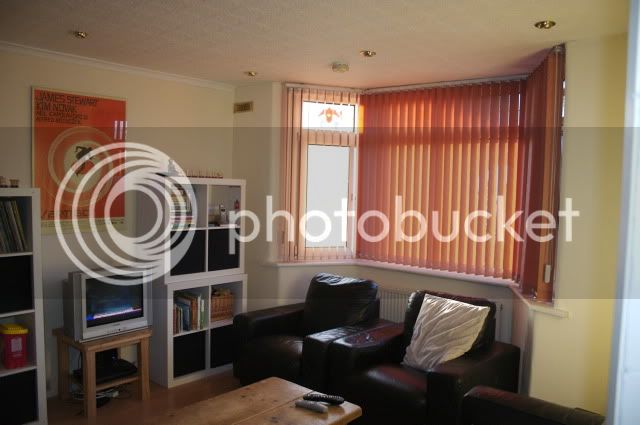 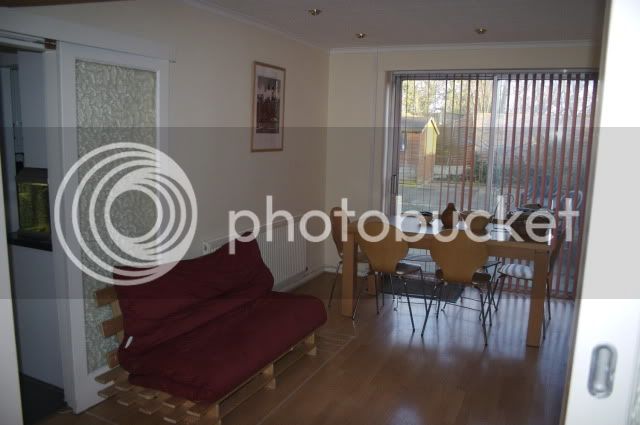 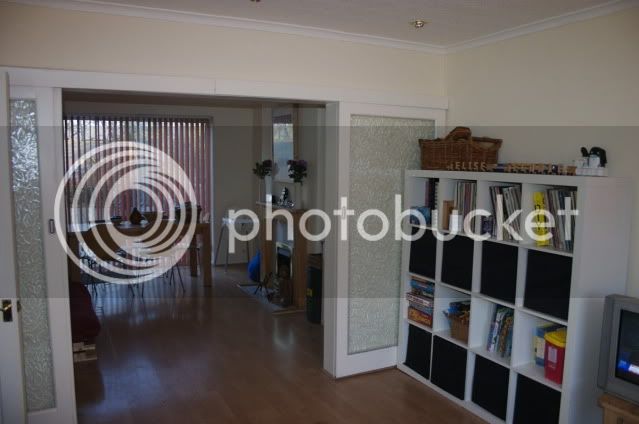 Hi folks - couple of update pics (mods feel free to place it in the 'members gallery' if it needs to be...I'm only really at the demolition/planning stage to be fair.

There's a fair amount to be done - perhaps that fateful day when I logged on here and had my first fix, I would've never have bothered doing such a thing, give or take a lick of paint

As I said, early days and I'm not in any of the trades so working on tips, instincts (always a bad thing!) and advice. I have a builder/joiner for jobs I won't go near (and electrician mate for the consumer unit end and design). Other than that, it's a case of getting stuck in.

Few pics to get going:

Overgrown hedges/trees to side of house (kind of 'no mans' land in reality...) - this alleyway had become a bit of a flytip and the trees were causing many problems with the house (roots had damaged the sewer pipes twice). 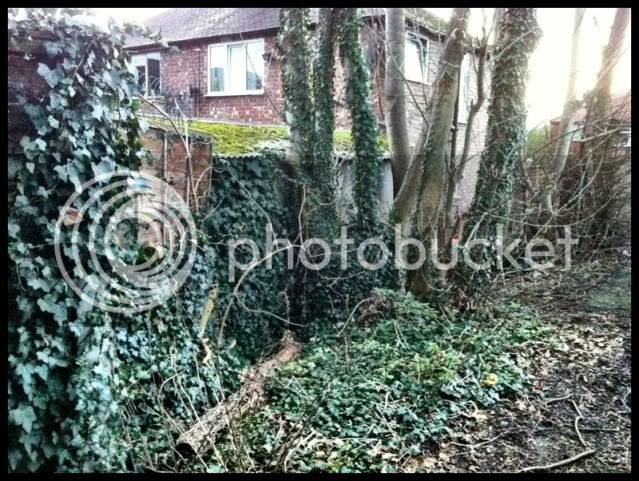 Then on to the back garden - two 8 yard skips (so far) to remove rubble and a dilapidated shed: 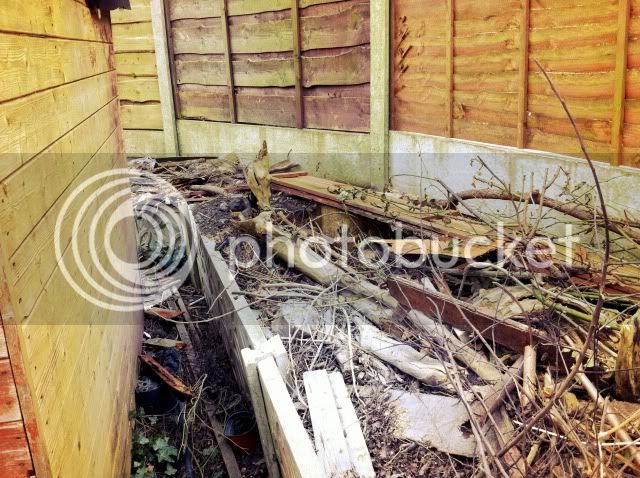 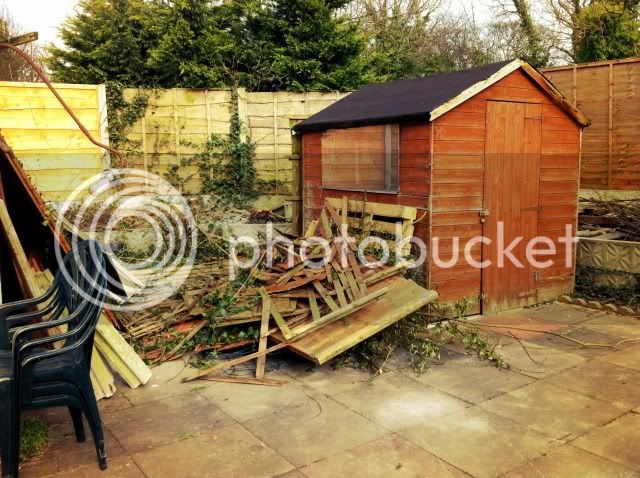 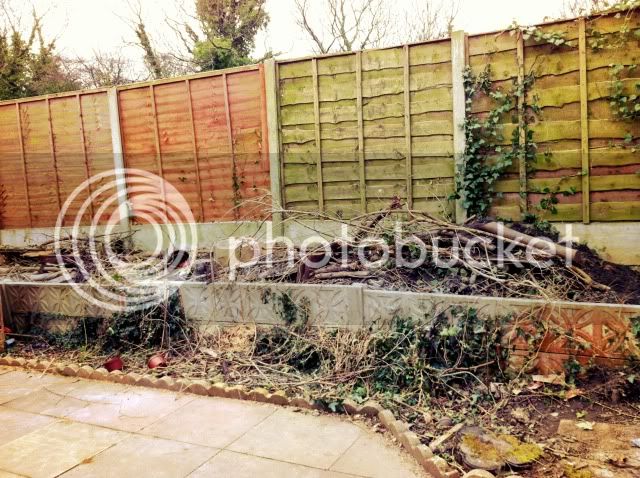 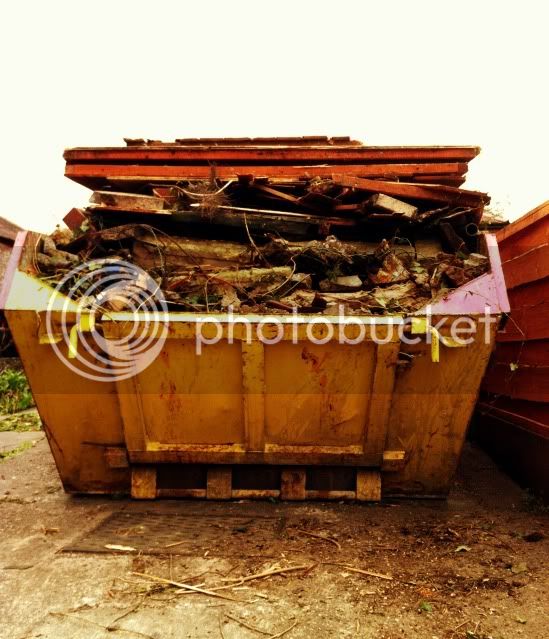 After - the garage in the pics is coming down as soon as a new shed is built - having someone take the concrete panels whilst I'll take down (taking all the precautions) the asbestos roof.

I've posted the interior shots above (another one here):

Looks ok here....but the photo is blurring the edges of reality a little
The floor wasn't the greatest (more than a few holes/damage on it) and the cheaper end of laminate...plus, there was an unusual 'aroma' eminating from somewhere....best to strip the house bare.
The wallpaper seems to be thick overlay...overlay over a few decades worth of 'fashionable' wall coverings It was pretty shoddy too - has been papered over the window frames in some cases and paint has nudged over into every plug socket, lighting and windows... 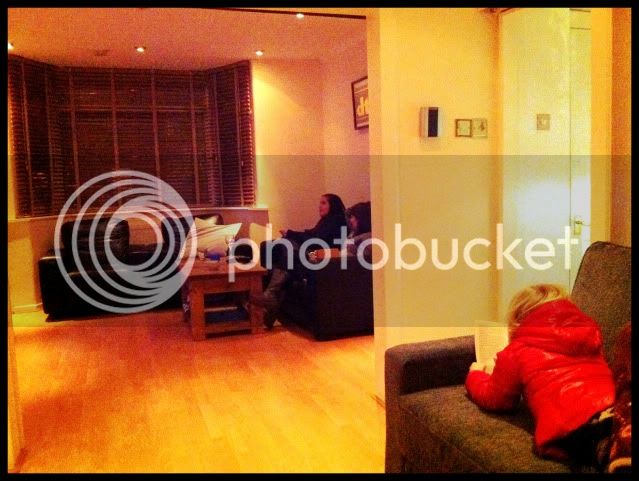 So...the rest of the family headed off for a family break whilst me and hammer had some quality bonding time...

What on earth have I done...I really don't know what I'm doing! 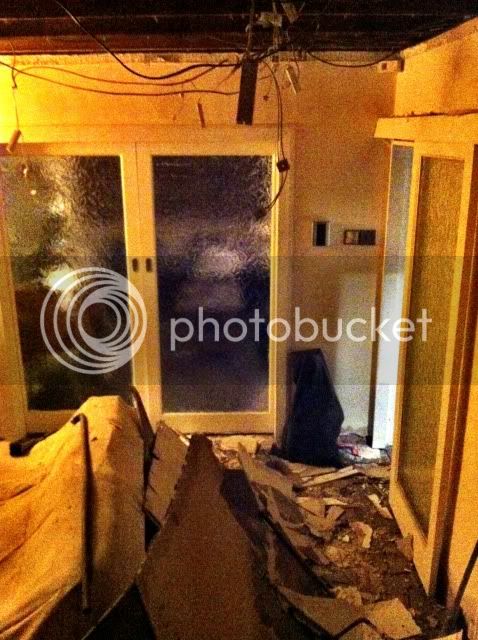 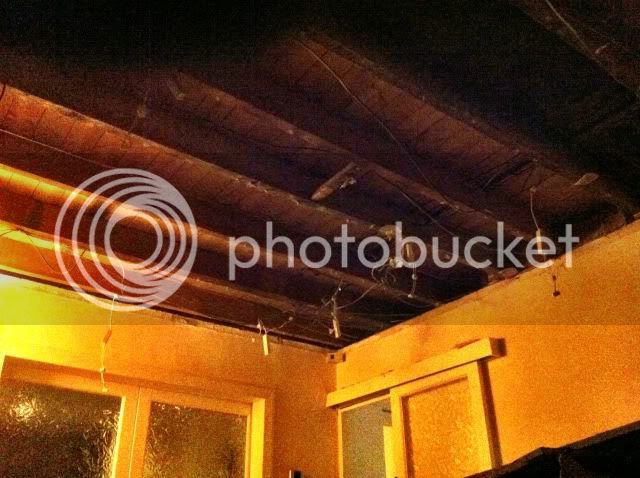 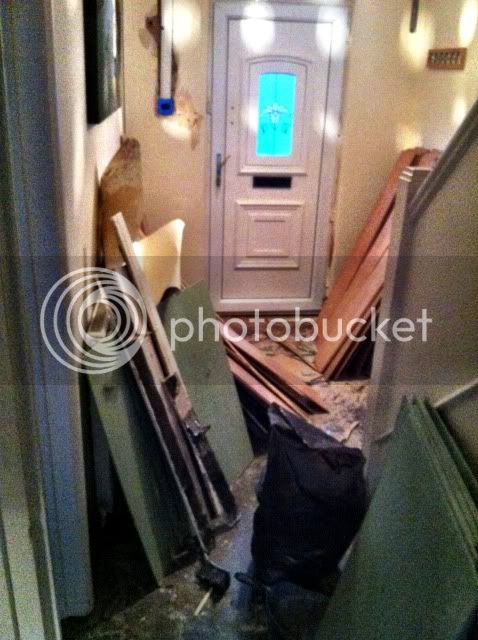 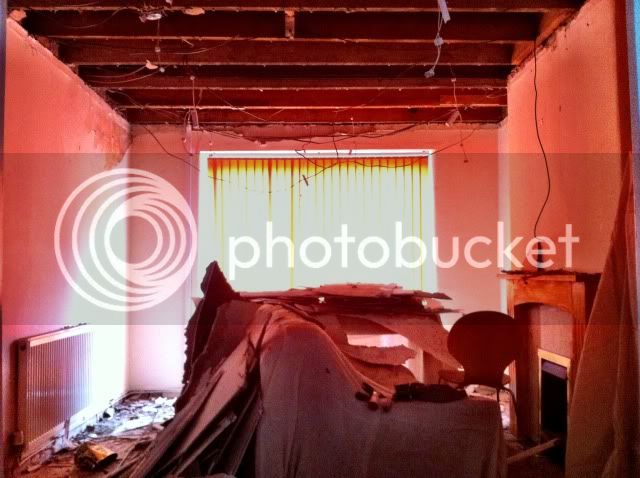 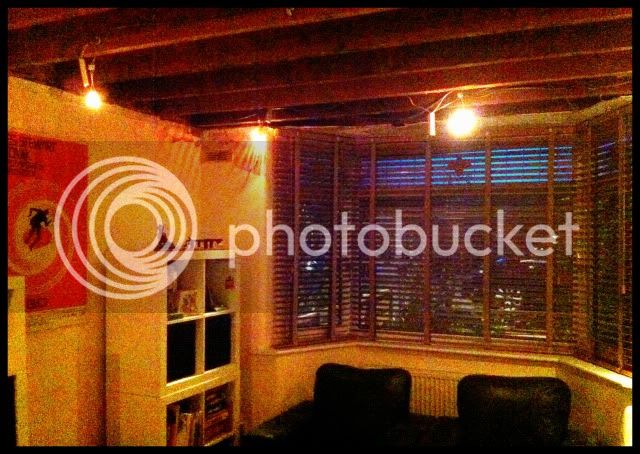 I'm currently planning my next move...essentially best options for lighting, new sockets (best to put whole new circuit in and replace old consumer unit - will explain in later post why) and networking.

Apologies for the pics - long story involving camera and other computer...have been using the iPhone for time being.

Networking - relatively simple requirements - any tips advice on this would be very, very welcome:

* TV in Living room, Dining room, Master Bedroom, Bedroom 1 and Bedroom 2 (family of 5!).
* Connected to cable (possibly sat in the future) - virgin media.
* Surround in room Living room (already have sony 6:1 system, basic as it is).
* The rest of the house (including outdoors) to have ceiling speakers
* Connected to DAB/Main hub iTunes and DVD film library

Been looking at the labgear - currently the cable line is fed into the downstairs living room from outside - this is then linked up to bedroom two (cable on front of house) - we are paying for this second cable subscription.
Need to have each TV able to view a different channel from one playing on the main cable feed - hence looking at the labgear splittlers.

As a rough estimate (not thoroughly revised!) I'm thinking for each of those rooms:

I'll build a PC up as the main hub and locate it next to the networking panel/node zero.

I'm either over engineering/estimating or it's a bit of task...unknown territory and all that!

Looks like you and I are in the same boat. I'm not a fan of Sky and prefer Virginmedia too, and don't really want to end up paying for multiroom, but there isn't much knowledge out there about how best to disitribute virginmedia.

In theory the standard HDMI over ethernet transmitters should work. There is a very good explanation here on AVForums which may help. Note you'll need at least two ethernet runs for this per room.

Anyway, will post more later, but would be good to know if you've made any decisions around how you'll be approaching this.

Looks like you and I are in the same boat. I'm not a fan of Sky and prefer Virginmedia too, and don't really want to end up paying for multiroom, but there isn't much knowledge out there about how best to disitribute virginmedia.

In theory the standard HDMI over ethernet transmitters should work. There is a very good explanation here on AVForums which may help. Note you'll need at least two ethernet runs for this per room.

Anyway, will post more later, but would be good to know if you've made any decisions around how you'll be approaching this.

Hi nmp - sorry missed your message...not been on here much at the moment...busy and all that.
Work on the house as slowed somewhat (financial and just plain busy with other stuff) but should pick up soon. Have taken wallpaper off all the downstairs walls and have purchased a fair bit of infrastructure: couple of TV's and Cat6 cabling, Co-Ax cabling, Server, 24 port Switch and 24 port gigabit switch. Currently designing rewire and plan for cabling - they seem pretty set now. Just struggling making up my mind about where to put the speaker wire (whether to take it all back to a central hub in the loft or wire it to each room i.e. stereo speakers placed in one part of the room and wired up to an eventual amplifier....

I'll get more pics up as soon as I can.

ohh subscribed to this thread. Looking forward to your updates. Good luck with it all!

What happened?
You must log in or register to reply here.