Secondly, I am about to build a garage and would like some CCTV around the house and for my garage

My house is a new build we have only just moved in September and I run a few Cat5 cables in but with hindsight I should have run more in. So, what I have at present is my BT home hub 6 in a cupboard under the stairs as this is where my fibre optic comes into the house yes, I know it’s not placed in the best position, but I did not get to choose where the BT box would be located

. I then have one cable coming from my home hub to my TV, the other goes upstairs to my 15-year-old sons’ computer as like a lot of teenagers he spends all his spare time playing online games. I also for some unknown reason to me have a spare cable run into his room that the electrician who was doing some work for me, but this is not connected to anything

What I am looking for and please don’t shot me as I said this is all very new to me. I would like to change my BT home hub to something more reliable and perhaps a better speed by adding a separate router, also would I go for a mesh set up or an AP to eliminate my Wi-Fi blackspots?


Moving on to the CCTV I think perhaps PoE would work best as like I said I have few CaT5e cables already run in, so my thoughts on that are

The cable that currently goes to my Tv put in a switch there run a cable from that to my TV then another cable outside under my drive as that is getting lifted to put ne Monoblock down and into my garage from there connect to another switch so that I can run a tv perhaps another AP? So that I can have WI-FI in the garage. Also, I would like to have additional CCTV camera there to cover the back garden and the garage

Upstairs where the spare cable is, I would connect that to another switch and from there run a further two cables up into my loft and out to the eves of the house one at each side and connect a camera to each so that I cover both sides of my house with CCTV

Is this set up ok for what I am looking for or is there a better way of doing this?

Hopefully I have explained what I have already in my house and what I am looking for
Beer
The reason I get up each afternoon!

stevo67 said:
My house is a new build we have only just moved in September and I run a few Cat5 cables in but with hindsight I should have run more in. So, what I have at present is my BT home hub 6 in a cupboard under the stairs as this is where my fibre optic comes into the house yes, I know it’s not placed in the best position, but I did not get to choose where the BT box would be located
Click to expand...

As you're in a new build home then you will almost certainly have wafer thin walls (if its anything like mine) which is great news for wifi - so you will most likely get away with using 1 router provided its not a huge house. However putting a router in an enclosed space is very bad for wifi so before spending any money on a new router , you need to move the Home Hub 6 router out in the open. It doesn't have to be slap bang in the centre of your living room, just out in the open, ideally away from other electrical devices and connect using a long enough cat5e cable to the Openreach ONT. Luckily Openreach gave me the choice where I wanted the Fibre ONT installed so it went next to the existing master socket out in the open. But I know in most new builds Openreach install the ONT in a well hidden location (eg in a cupboard) which means any wifi router cannot be placed in the same place unless you don't plan on using wifi.

If wifi doesn't improve even after locating the HH 6 in the open, then I highly recommend buying something like the Netgear R7800 or TP Link AC3150, both of which are great wifi routers. You won't need a router with a modem built-in as your connection is pure FTTP, so any standalone router will do to authenticate with the ONT.

This is where the Openreach fibre terminates in my home, though I suspect you will have the newer single port ONT with an enclosed battery back up unit (BBU): 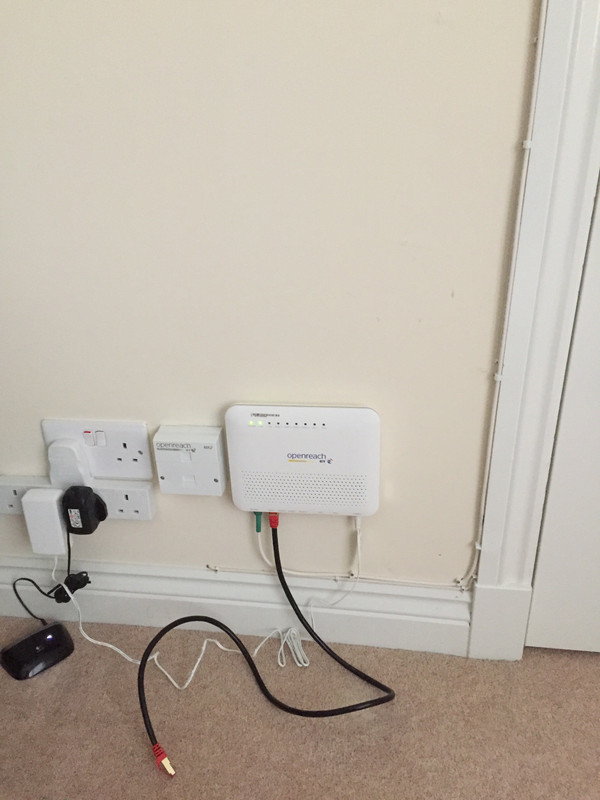 The plan regarding extra switches is fine. There's no problem "daisy chaining" a few switches off each other. Technically, one might consider the bandwidth requirements on the uplinks between the switches (and to your router) but if you're talking about low bandwidth applications such as TV and CCTV, I doubt it'll be a problem especially if you buy 10/100/1000 (AKA "Gigabit") switches (which are so cheap these days you may as well as the cost saving on 10/100 switches is minimal.)

If you want to deploy POE capable devices (CCTV, AP's etc.) then of course you'll need POE capable switches - again they are not too much additional cost these days. Don't forget to ensure you have a spare power socket wherever your switches are going - it's easy to forget. Often SOHO switches run off an external "wall wart" PSU.

If you are establishing a new cable route to your garage under a driveway, then I suggest you install it into some ducting to afford some mechanical protection and if you leave a "draw string"
in situ, you or some future owner could use it to pull in additional or replacement cables in the future if needbe.

Even so, I'd run two cables out to your garage. It's highly unlikely a UTP cable will fail in service, but if it does and you already have an alternate in situ, you can be back up and running again quickly whereas with a single cable, you're off the air until you rip and replace. I'm fond of saying cable is cheap compared to the hassle of installing it.

Inside both buildings, I would "dress" the cable entry points onto a faceplate and take a patch cord to your switches (or direct to devices) rather than have a "hole in the wall" into which my cables disappear - but so doing is not strictly necessary and is mostly an aesthetic consideration.

It's a good idea to label the ends of each cable lobe with a unique number for identification purposes and if you wanted to go the whole hog, you could record what goes where to where in a "patching schedule."
Last edited: Apr 3, 2019