I'm planning to upgrade my AV system to include a projector and I'm after a bit of advice as I know very little about projectors.

I've had a read of these forums, and I think I may go for the Optoma HD200X from Play, which includes the free Panoview 84" projector screen. My current AV system consists of:
TV: Samsung LE40A686 LCD TV
Amp: Denon AVR-1910
Speakers: Kef 2005.3 with Kube 2 Sub
Console: PS3 (slim) with PlayTV
Computer: Macbook 13" with Dell 2408WFP Monitor

The projector would mainly be used for gaming and watching films on DVD and Blu Ray (and probably freeview HD when I get round to it). I've considered 3D (briefly), and figure I'll give it a couple of years to mature before I invest. In the meantime, I'll invest my money in 1080p instead, unless anyone has any thoughts on this?

Here's my room at the moment, along with a scale drawing to give a better idea - I could have done with a wide-angle lens really 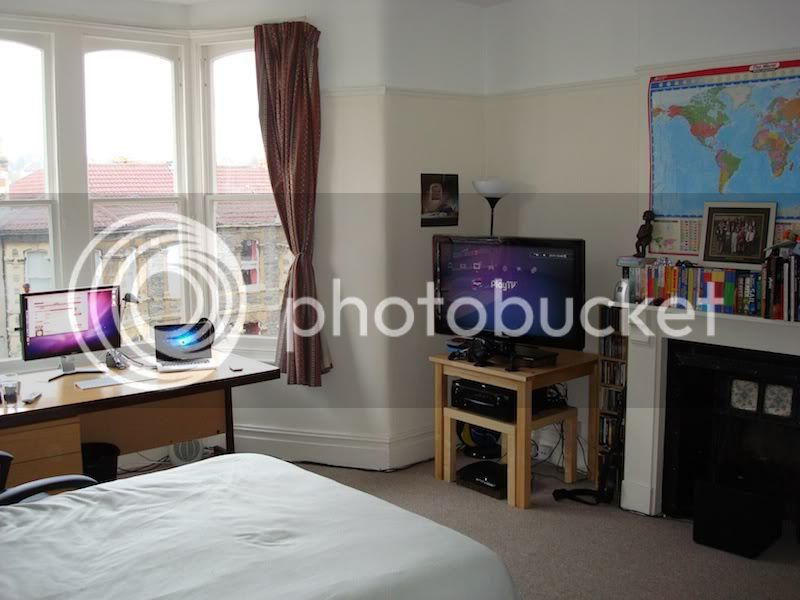 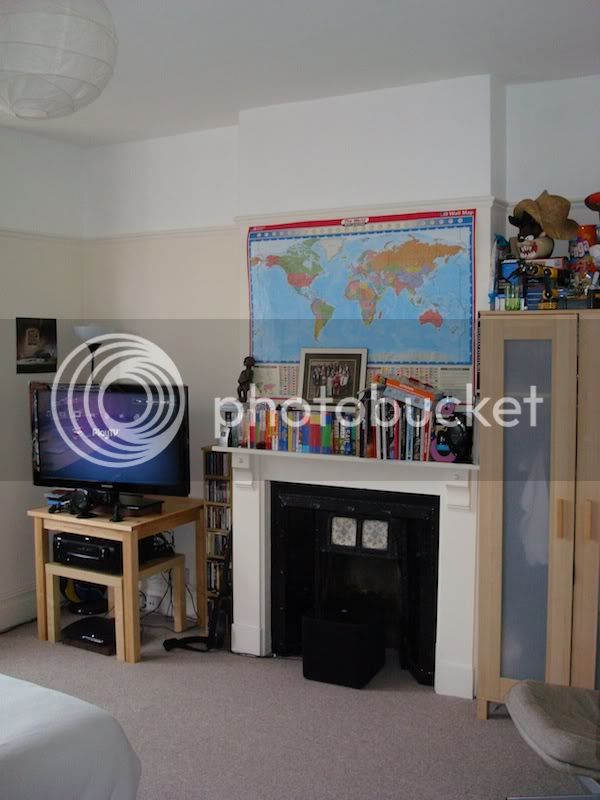 Current layout (note that I don't have a rediculously small room: mm = cm ) 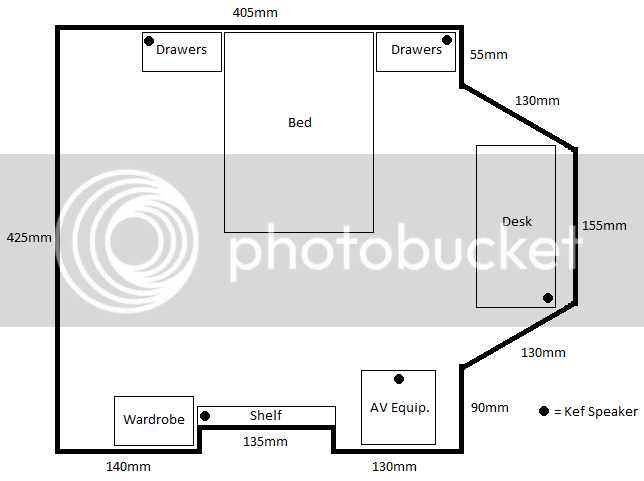 Here's the planned new layout for my room: 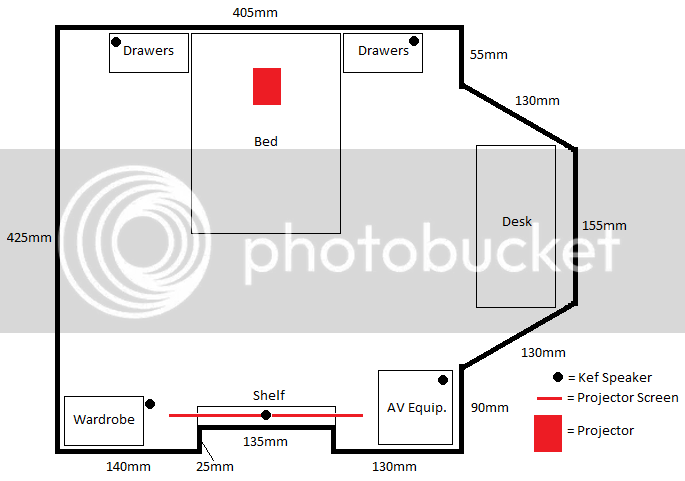 It's a bedroom in a rented house, so sadly no living room to pimp out, so I have to make do with my bedroom. As a result, I've put the bed as the optimal viewing position for my setup - this seems to make the most sense as I view most of my films from here already. Hopefully it'll be comfortable enough to perch on the bed to play PS3 too, or perhaps a chair at the end of the bed if my eyes can take it. I've considered other orientations, but it doesn't seem to work, and would be more difficult to wire up too - I don't want to have to change my room too much if I don't have to.

And now finally for my main query:
The ceiling is almost 3 metres high. I had initially planned to ceiling mount the screen and projector with a separation of 3 metres (making an 84" screen perfect). However, now I'm thinking that may make the screen a wee bit high for comfortable viewing - especially since the projector should be only 16cm above the top of the projected picture according to Optoma HD200X Projection Calculator - Throw Distance and Screen Size. Also, I'm not convinced there's a conveniently central ceiling joist to secure anything to (or how to find it if there is).

The way I see it, the alternative is to mount the projector on a shelf above my bed at a reasonable height, and wall-mount the projector screen so that the bottom of the screen sits just above the fireplace (with books etc removed and a kef egg speaker hanging underneath the shelf). However, this puts the projector-screen separation at around 3.6m which, according to the website above, would necessitate the need for a 100" screen! Not only is this a little excessive given my small viewing distance, but presumably ambient light will also be more of an issue with a bigger screen, as the projector light is spread over a larger area, giving a dimmer picture - I have rather large bay windows to worry about. Is there a way to focus the projector so that it still fits an 84" screen.

Also, I still plan to use my TV, but the AMP has a single main HDMI out. Obviously I could just switch cabled around, but do people generally buy a HDMI switch to switch between TV and projector?

This is my first time messing with projector stuff, so I welcome any ideas and recommendations! Thanks for reading!
Last edited: Nov 22, 2010