Today i start to tackle a 'floating' wall,inspired by Groove's excellent floating wall thread
First task was to remove the fireplace but without damaging it as my partners sister wanted the marble hearth and surround
This went easier than planned,phew! Barrett builders,pffft
I'm just marking out where everything is going to go then i'm off to get some wood for the frame etc
Hopefully i would like this finished before Christmas

Thought i'd update this thread with my finished project.
I'm not ashamed to say that it's a 99.9% copy of Groove's wall,only real difference being the PMC speakers.
First off i had to chase out the wall so i could run my rear speaker wires for my Kef's 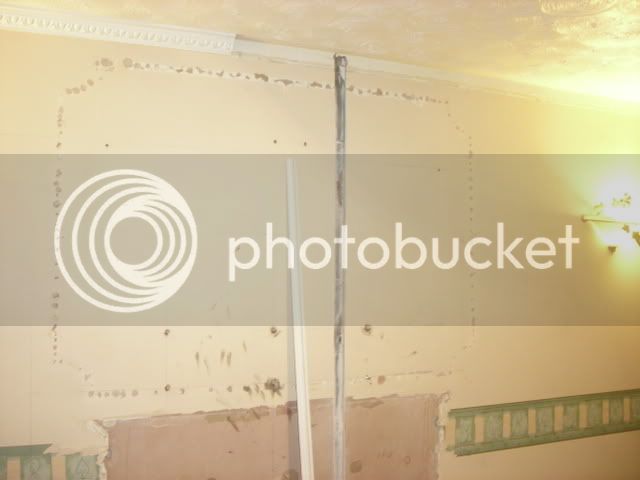 Then up went the framework with the TV bracket going straight on the wall using through bolts.I had to block off the fire.I extended the wires from my original wall lights so they came out above the frame work: 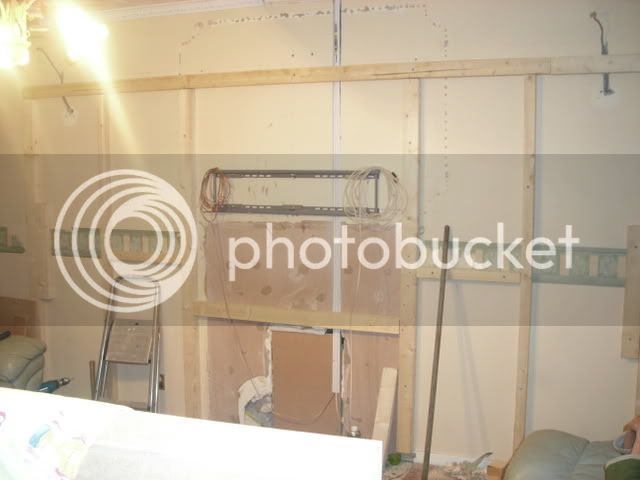 20mm Hole drilled in the ceiling with the wire and hole being hidden behind the coving. 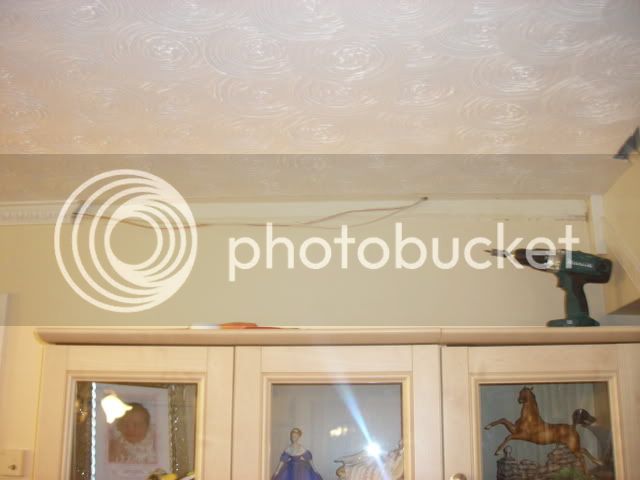 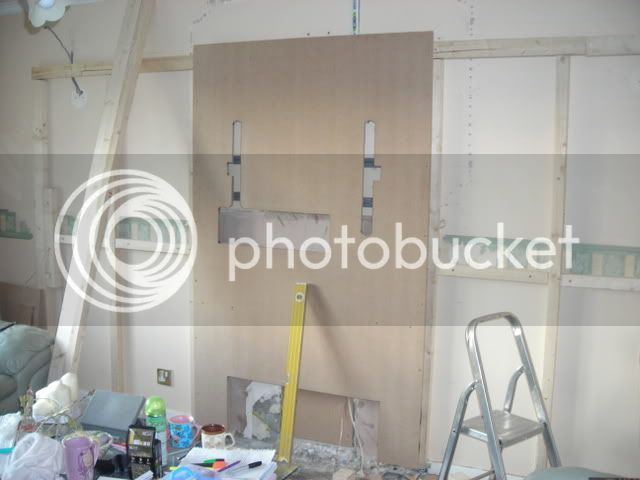 All the boards up(Bad photo i know ) 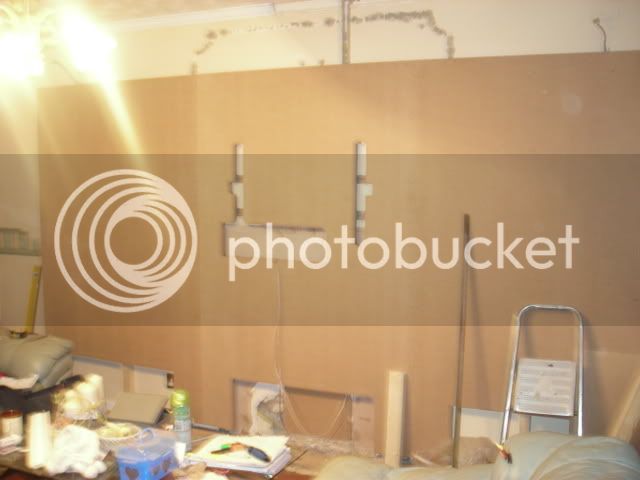 MDF primer goes on and a dead Dyson 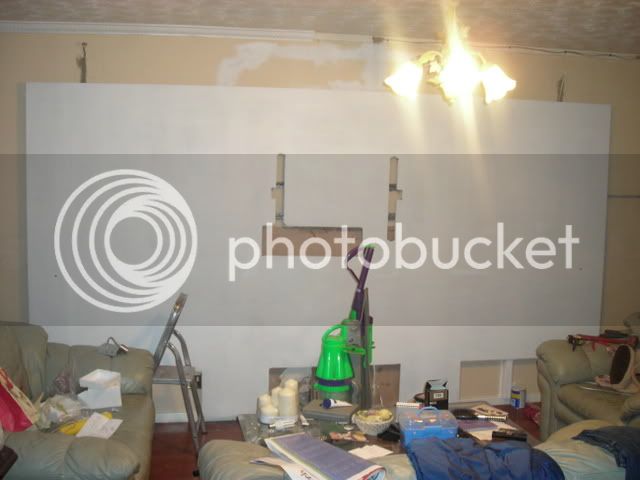 Little one mucking in!! 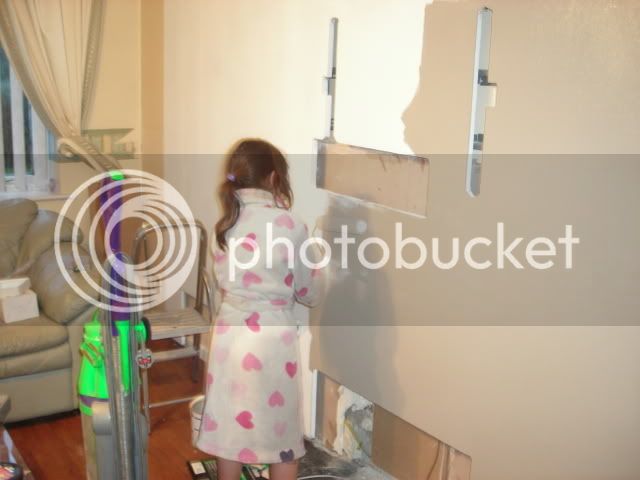 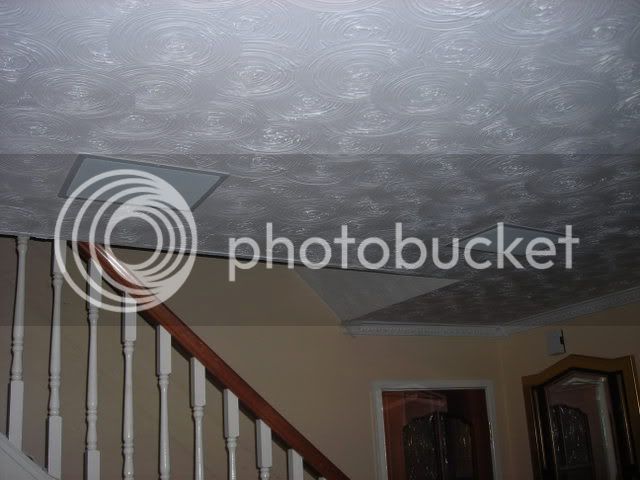 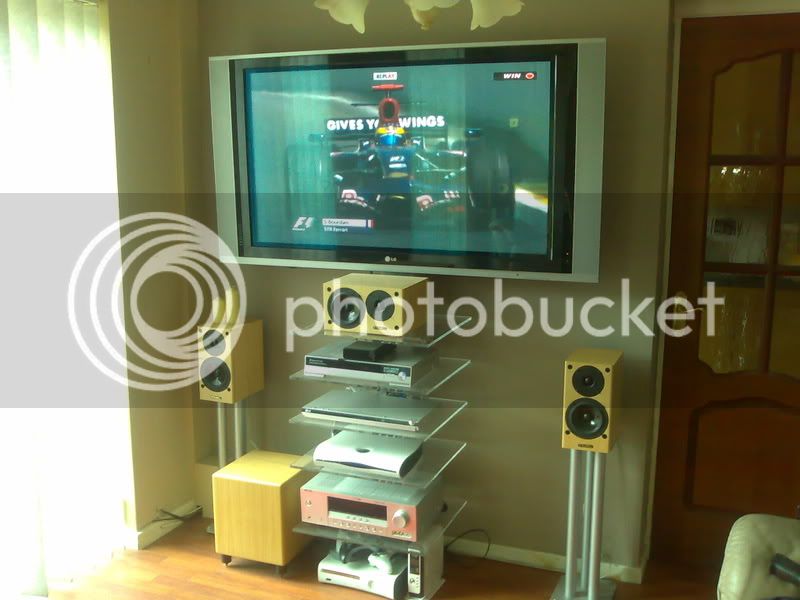 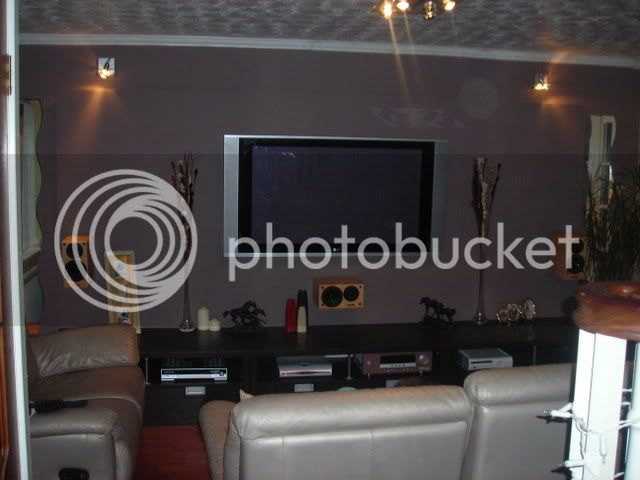 I made the speaker brackets myself after seeing how much PMC wanted for theirs,£65 for one bracket

Nice work! I particularly like the in ceiling speakers, well done!
C

that looks very nice, i like the ceiling speakers, that is a good idea for a room with limited space!

I'd thought I'd better update this thread after finally installing my HD20 and 92" Elite grey screen which I bought way back in July 2010!
First off I made some screen brackets as I couldn't find any that suited my needs,the slots I milled out just in case I needed to adjust the screen up or down if my measurements were out,luckily this wasn't the case.I fitted the Cablesson splitter I got off Amazon along with the 15m HDMI cable.This was run in some conduit up to the coving and then along the same route as the speaker wire. 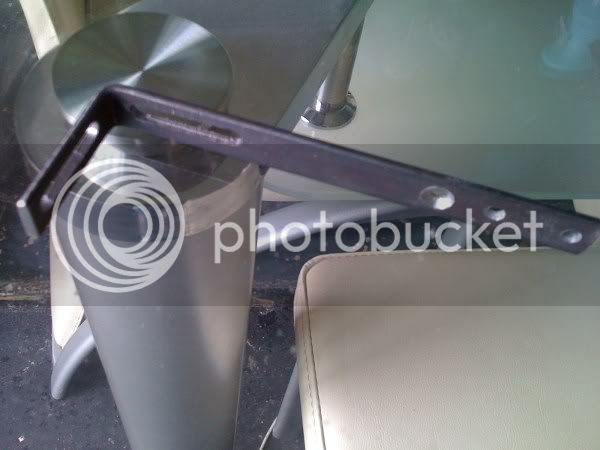 Next was to cut out the coving(neatly) so I could fit my brackets.These were screwed to a joist and I used those metal Interset plasterboard fixings by Rawlplug on the outer hole. 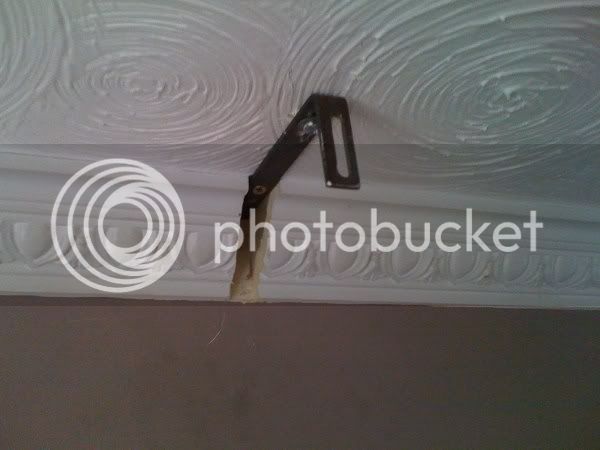 I then re-fitted the coving using copious amounts of decorator filler!! 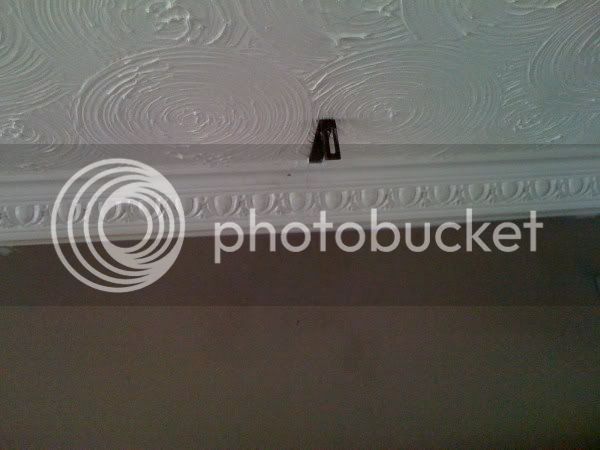 Next up was the universal mount for the HD20,I cut the mounting plate up to fit the HD20 properly,your suppose to use the arms that came with it but there's not a cat in hells chance of them fitting the HD20. 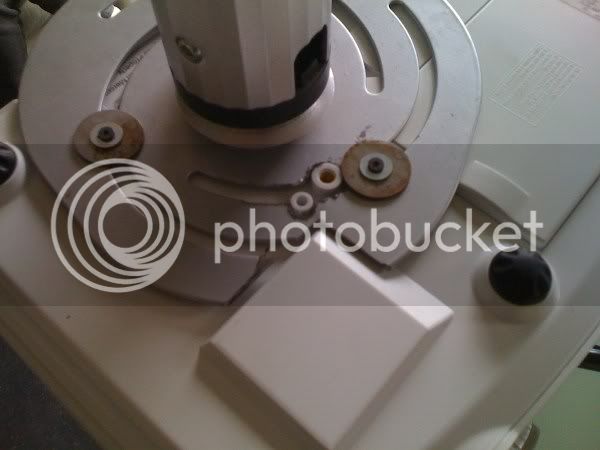 This was screwed to a joist.On hind sight I would have thrown this mount in the bin as it's woeful,to much 'wobble' in it but it was to late as the ceiling was already drilled etc.I've 'bodged' it at present,later on I'll invest in a better one. 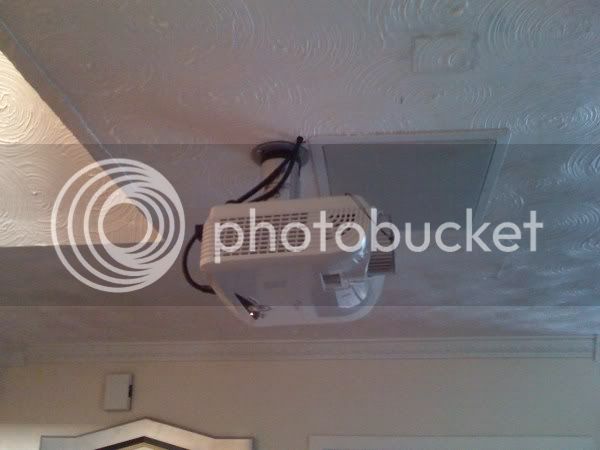 To get power to the PJ,I used a plug socket on the landing,I drilled a channel for the lead to an existing hole due to pipe corrosion from flux. 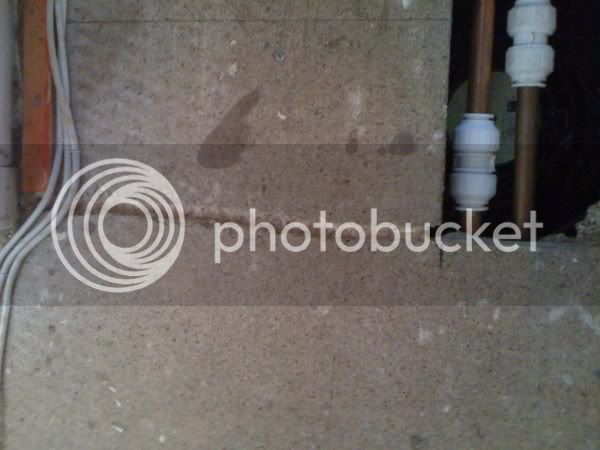 So here's the screen fitted,: 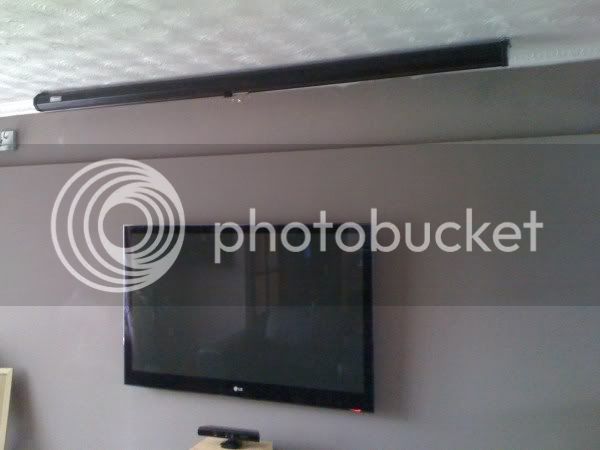 And down and in comparison to a 50" LG shown above,it's curled in at the edges,not sure why,maybe because it's been rolled up for so long? 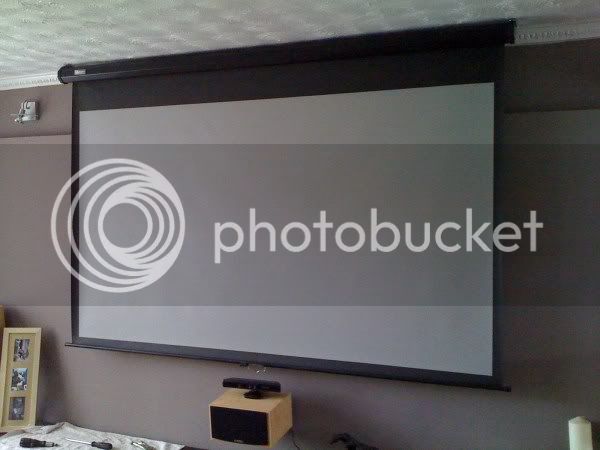 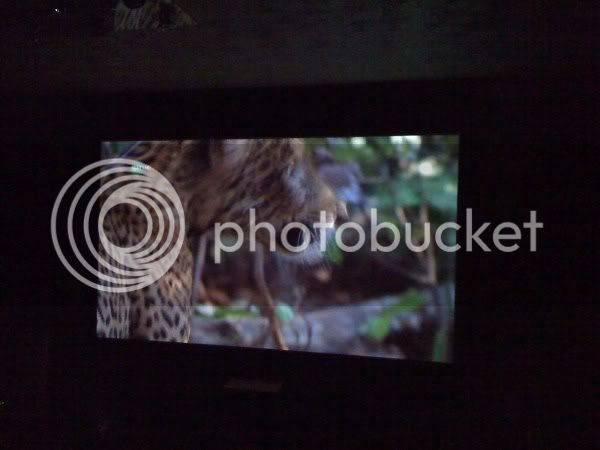