Thought I should finally add some photos and spec details to the forum showing my most recent built. As usual, I got too involved in the build to take step by step photos, so I apologise that these are just of the completed item. Spec is hopefully going to be improved over the coming months (mainly hard drives, storage controller wise), but as it stands:

Drives at the moment are a Maxtor 160gb and 300gb just to build up and allow me to have a quick experiment with Server 2008 R2 (thanks Dreamspark!)

So, without further ado, what you have been waiting for - photos: 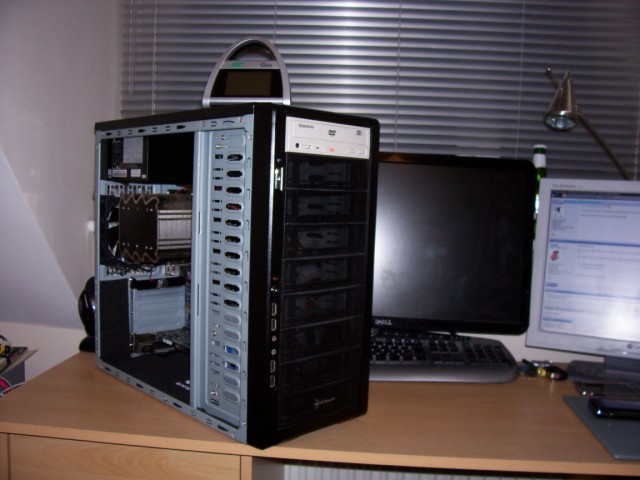 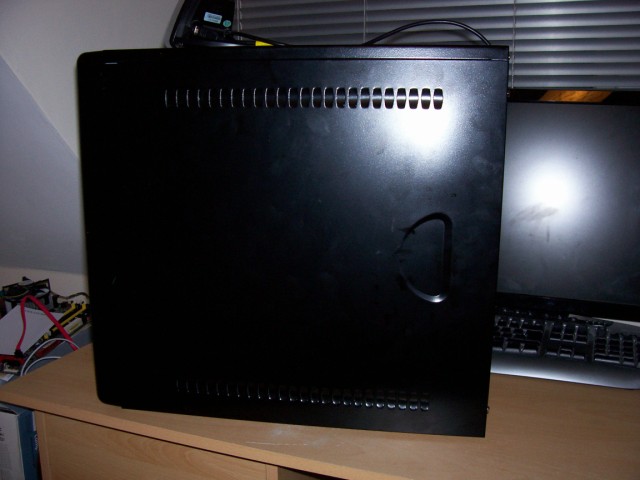 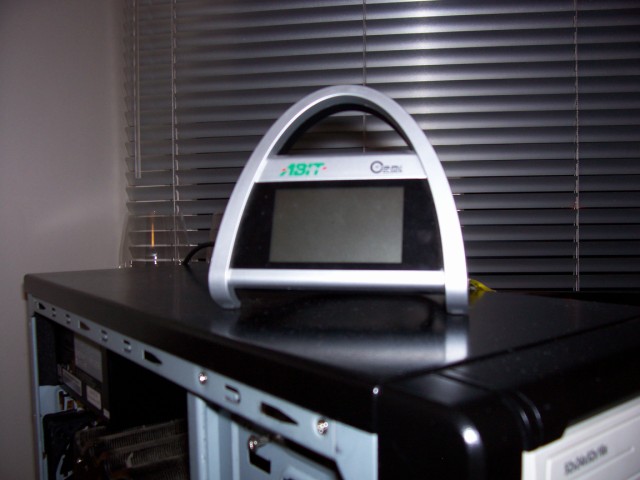 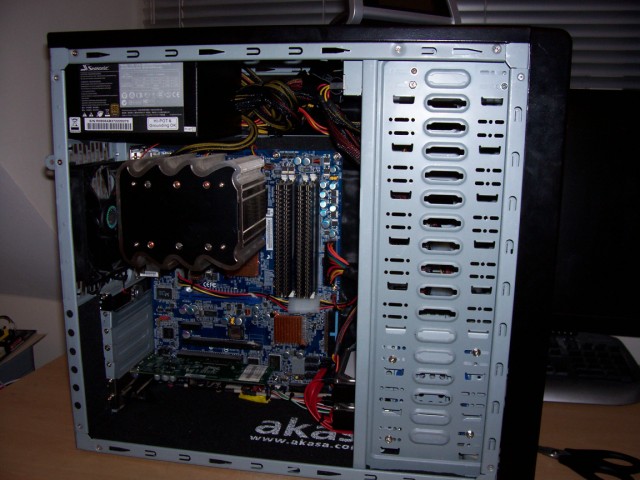 Seasonic Power - a similar one serves me well in my main machine - brilliant PSUs: 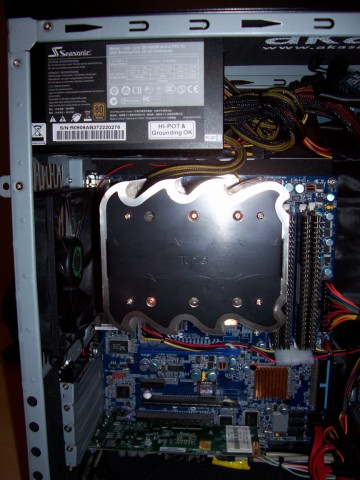 A monolith of a heatsink and the decent RAM can be seen in this shot, with the Paxmate in the background helping to keep sound to a minimum - probably overkill, but should keep things nice & quiet, quick and reliable 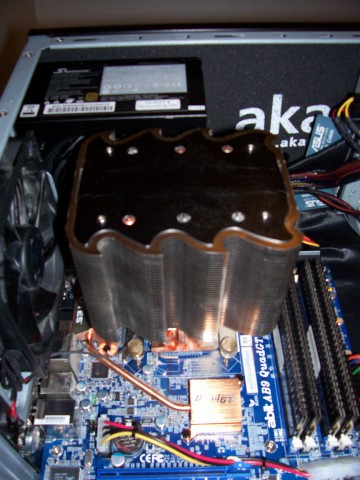 A quick shot of the hard drives/bottom of the machine, showing the sound deading, my attempts to keep cabling under control and the soon to be replaced hard drives. Oh, and not to forget, the awesome GeForce 4 GPU that sits at the heart of this beast : 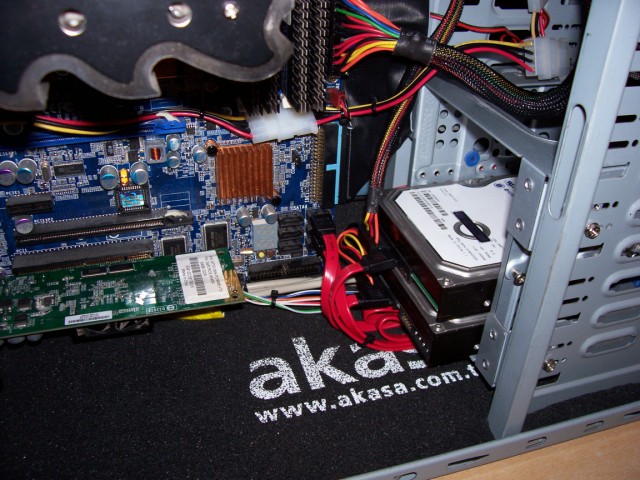 A shot of the rest of the cables, looks messy but hides them nicely out of the way without the need for chassis mods: 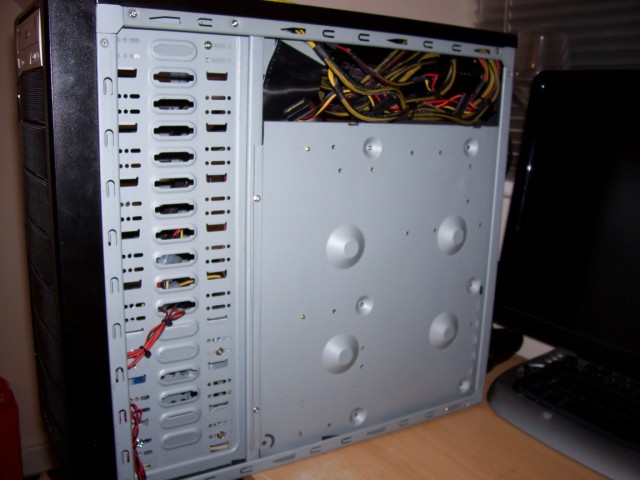 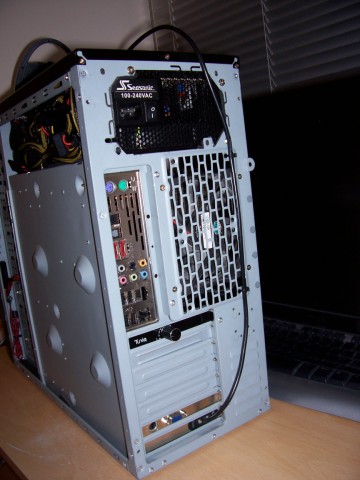 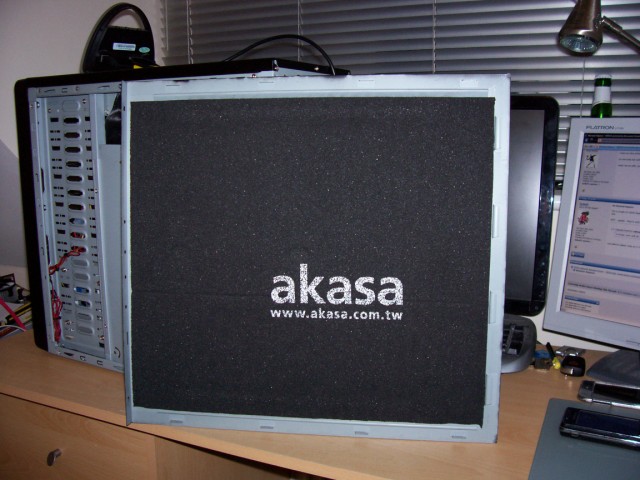 And the only slight hiccup of the build. You know that huuge cooler? Well the side panel has a fan on it. d'oh, not enough space inside for both. Think I'm going to have to run without the fan on the side panel 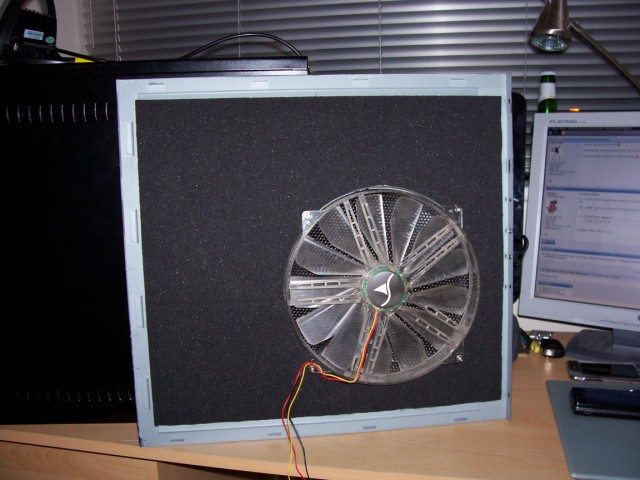 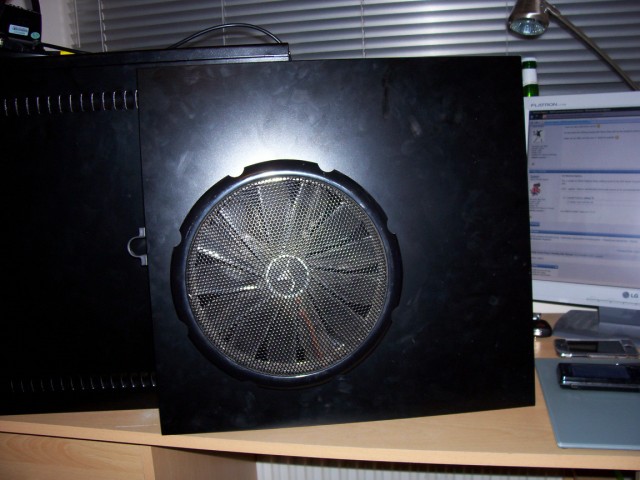 So, what do we think?

Interesting project. What are you planing to serve on your beast and how may conections have you got planned?
Panasonic px80 37" Plasma, Epson TW3500 projector, Panasonic BDT310 BluRay, Denon 1910 AV receiver, MA Radius 90 speaker package.

Homepage: The virtual presence of GrahamC

What you planning to run on it?
Are the drives hot swopable?
How much did it cost?

GrahamC said:
Interesting project. What are you planing to serve on your beast and how may conections have you got planned?
Click to expand...

I don't think everything is likely to be in use in a single go, but I'd like to be able to feed content to 3-4 machines/devices at a time. The ultimate plan is to have it at the centre of the home network, feeding everything from Squeezeboxes or Sonos, through to Games Consoles/HTPC/Desktop/Laptops etc. So it will be a mixture of Videos & Music content etc, through to normal Office documents and act as a repository for photos & bits.

Connections wise, I thought I'd plan scope for improvement - the core spec of it should give me enough performance to feed media to the HTPC I've got planned, aswell as the XBox/PS3 at the same time, with relative ease. Then as I expand the network (thinking some form of HTPC with every TV in the house) it should be able to cope. May need to add a decent NIC to it, but that isn't a huge hassle to do

What you planning to run on it?
Are the drives hot swopable?
How much did it cost?

Planning either WHS or Server 2008 R2, though depending on how I get on with WHS, that looks to be the preferred choice due to ease of use.

I'm fairly comfortable with Windows Server, but I do think it is perhaps overkill for this application. I did consider creating a domain and running things that way, but it is good practice to have a second machine in case of drive failure for example, and I don't really want the added complication!

Drives unfortunately aren't hot-swappable, one of the other reasons I think running a domain would be overkill/unwise - as potentially downtime would be problematic. I have got the scope to add 2x Dell Perc or similar into the machine, but WHS does its own thing in terms of file replication afaik.

Cost wise I haven't kept track, but off the top of my head:

Case - Free
Coolermaster 4in3 drivebay thing - Free
DVD Drive - Old one lying around from a long dead build, so Free.
Fans - 1 with cooler, 1 on the Coolermaster 4in3 and 1 from an old build - so Free.
Drives - Old 160gb and knackered 320gb lying around - Free, but soon to be replaced.
CPU/RAM/Board/Cooler - £80
Power Supply - £35 including a copy of Grid (bought from a friend - he'd ordered the wrong one!)
Akasa Paxmate - er £15? Bought from Maplin so I could get on with the build.
Cable ties - couple of quid from B&Q ages ago.


So circa £150, because I've probably forgotten something. The expensive bit is going to be adding the drives

So, total cost of around £150 because I've probably missed something
You must log in or register to reply here.

M
Promoted WANT IT, RENT IT