Latest pics at the end of the thread

well after a few months since completion, I thought I'd better post some pics of my new build and home cinema.

Some background: With a new baby on the way (now arrived, thank you very much

) the previous home cinema was in one of the bedrooms (see My (new) Cinema Room!). We wanted to free up that room for the new arrival, so we decided to build a new room on to the back of the house, that would double as a nice lounge off the kitchen and home for the projector, big screen et al.

We had a local builder and architect (excellent by the way) come in and help us with the plan and the ideas. Unfortunately we needed to keep it to a reasonably modest size (about 3.75, x 3.9m) and an awkward window in the smaller bedroom meant that we also had to extend that room in order to get some light into it !! Its complicated but meant that I had to compromise on width !

We wanted the room to have all wires and equipment hidden as much as possible, so speaker, screen, projector placement prior to completion was important. We wanted a cupbaord with a door that would house the AV equipment as well as storage for as much media as possible.

I didn't buy any new equipment apart from a new Yamaha amp that gave me 2 HDMIs out for the 32" TV and the Projector and the Keene IR distribution box allowing the equipment to be remotely controlled with the door closed.

We wanted the screen hidden, so a pelmet was made to hide the casing, and the screen drops in front of the TV. As the room is also a used living space we had to compromise on wall colours (at least one wall is dark) and light (large 8ft patio doors, curtains yet to be added and a velux window with electric blackout blind ), so its not a batcave

Some to do's include curtains, doors into the kitchen and a new 4 seater recliner sofa....oh and new PJ & screen !! Anyway here's the pics:
Day 1: 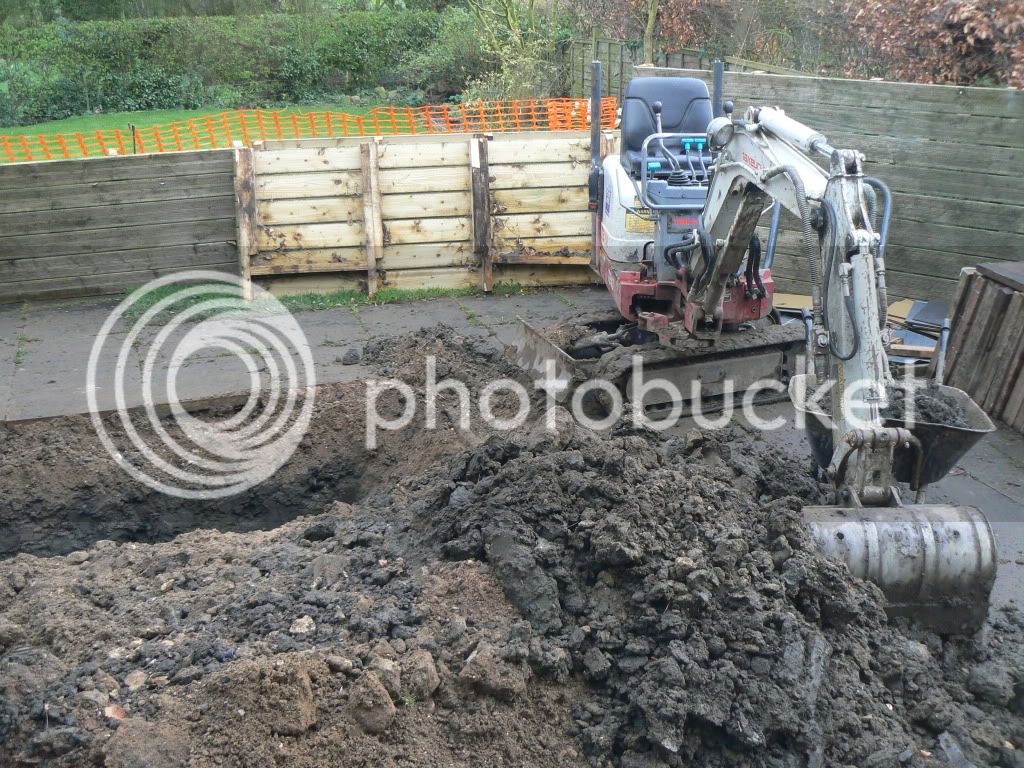 Getting there outside & in: 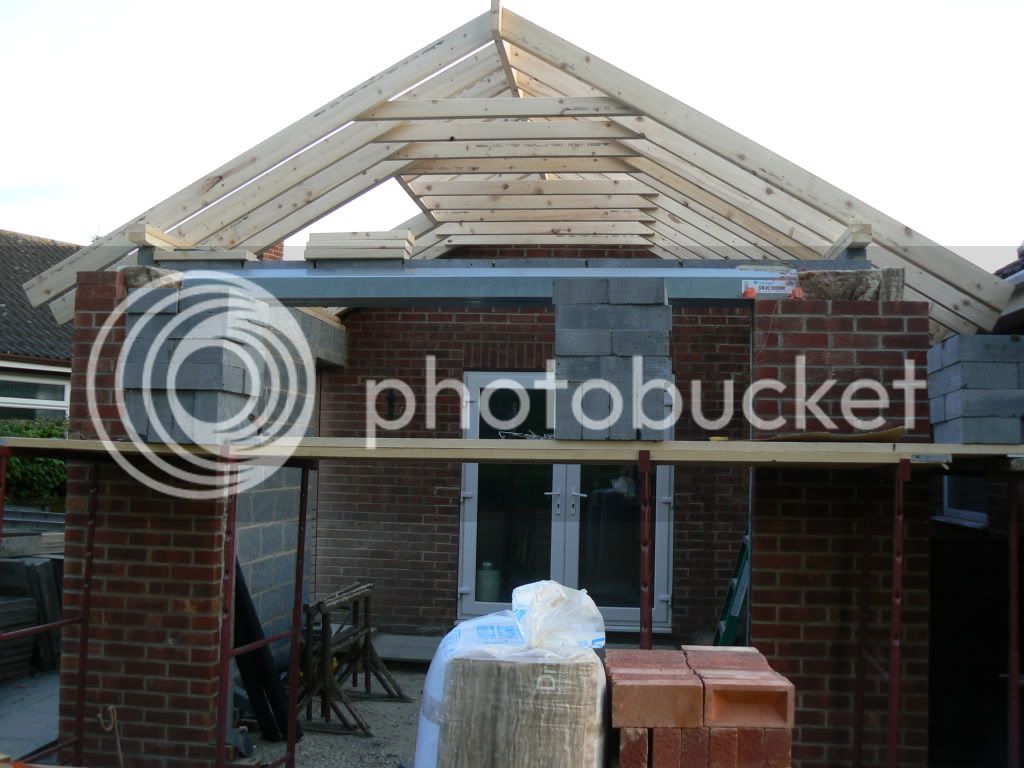 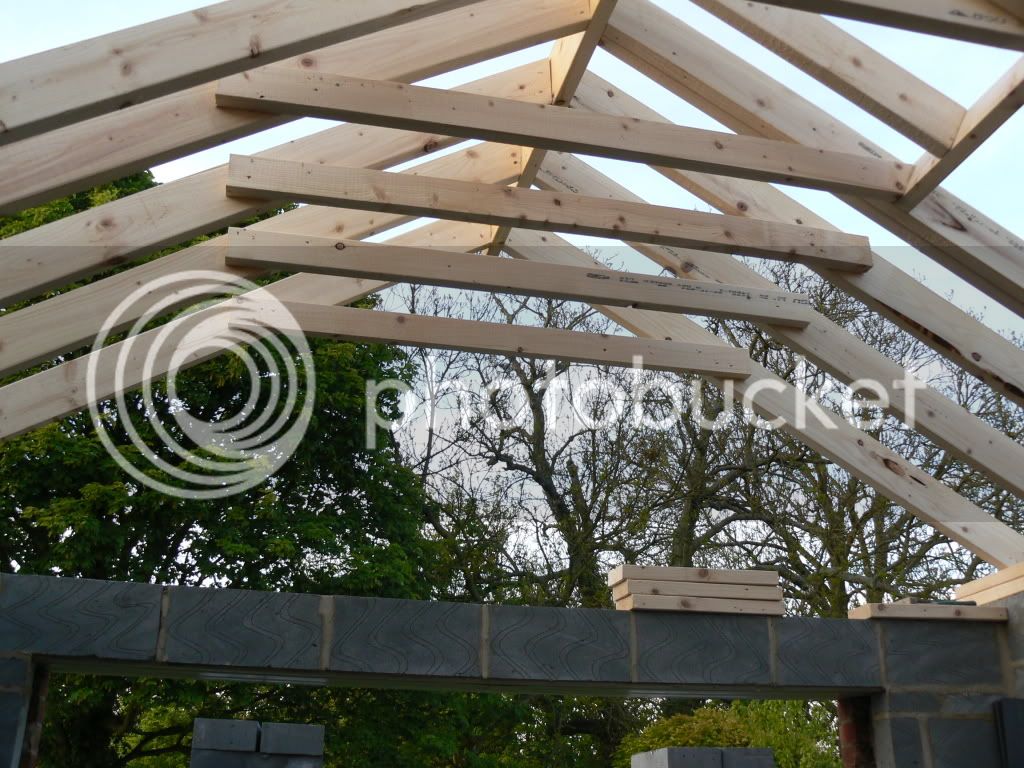 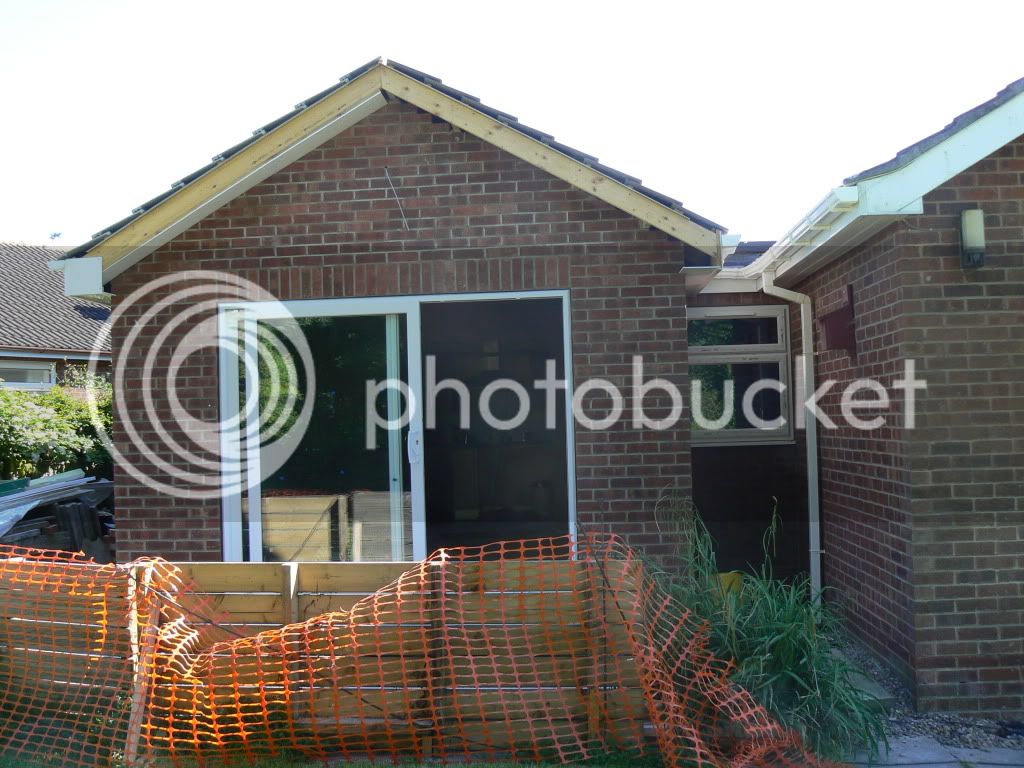 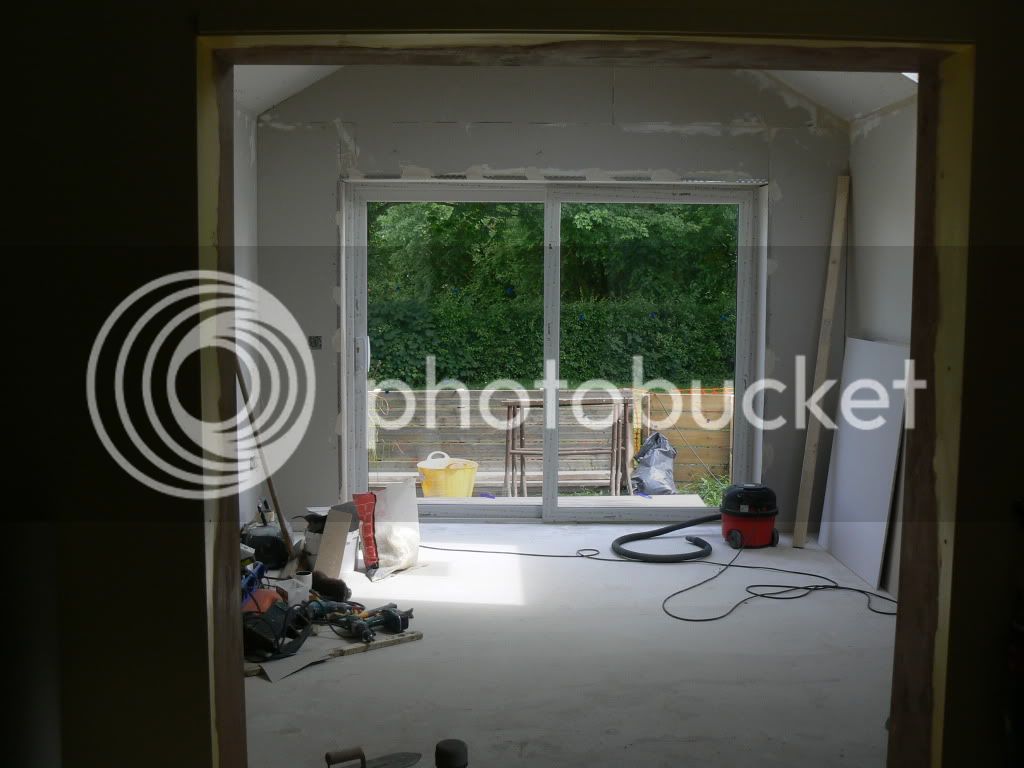 Screen up test- note the pelmet to hide case 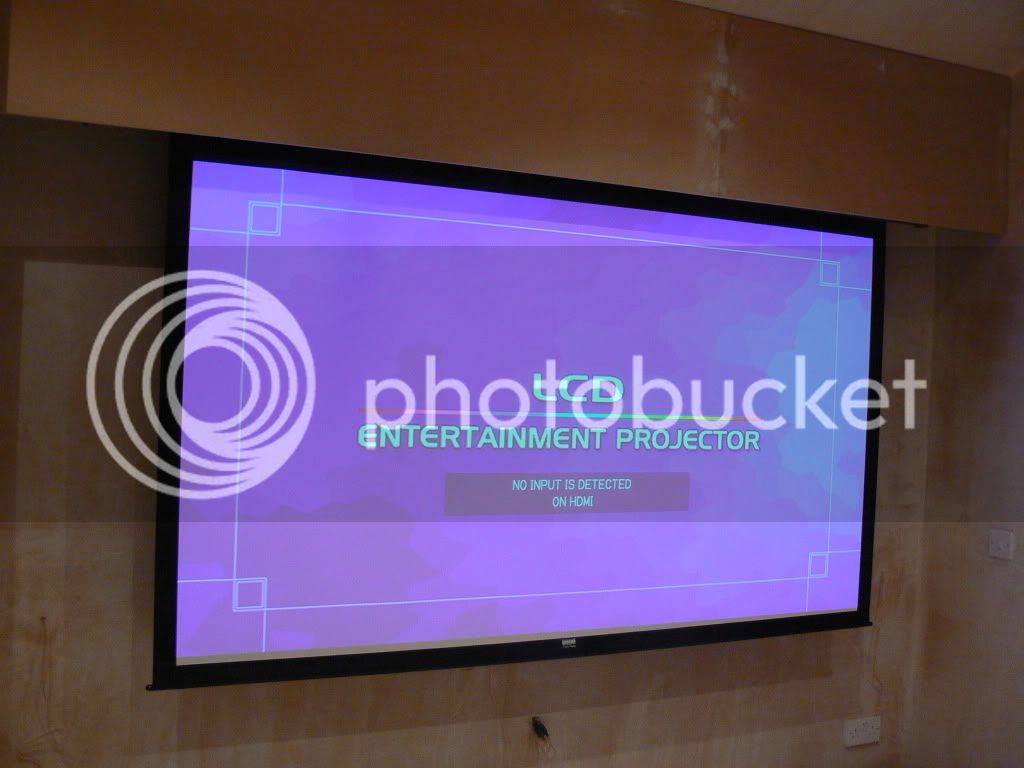 Part 2
First stab at a PJ mount, was too high and not pleasing to the eye for herself, so got a dedicated mount instead: 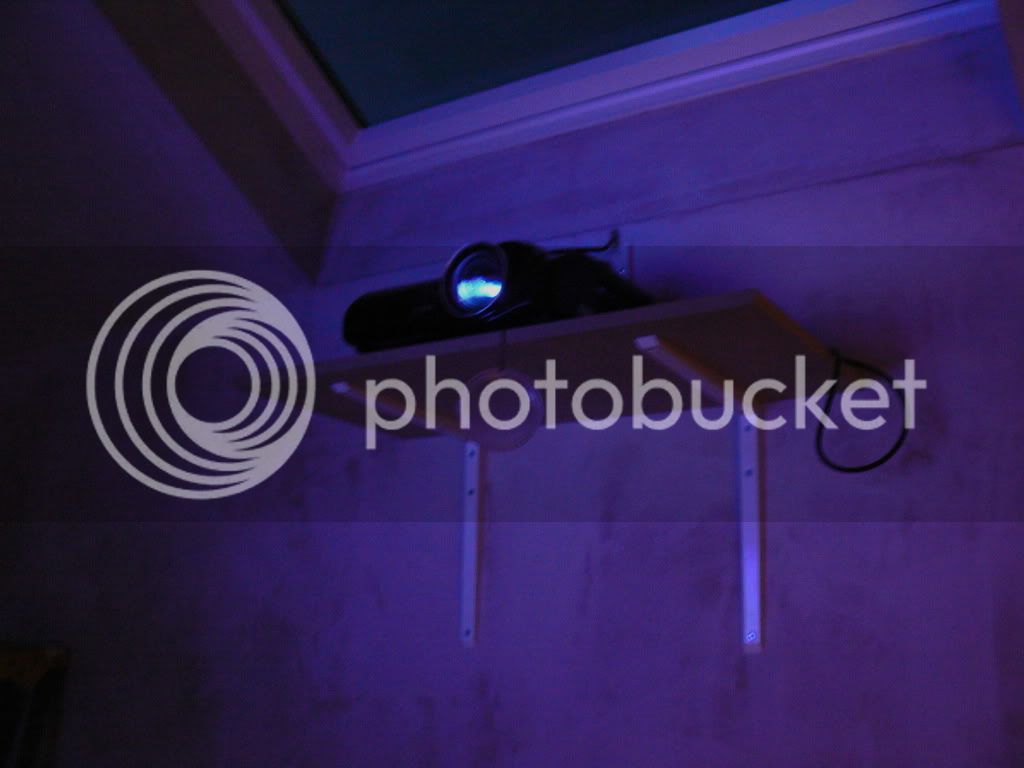 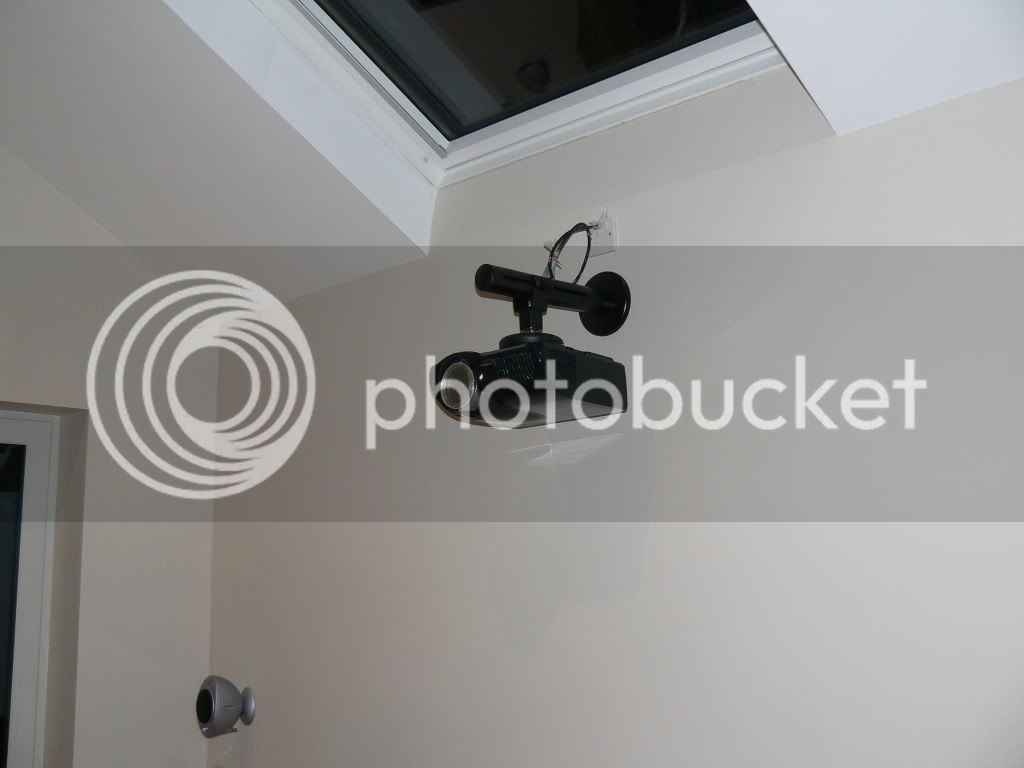 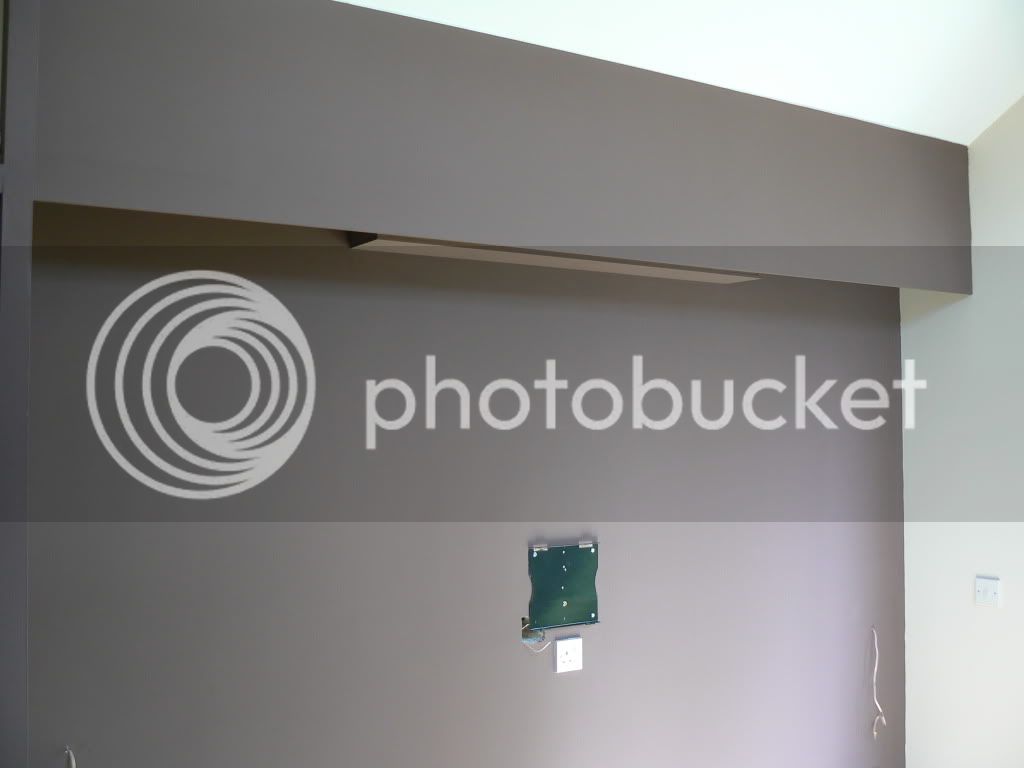 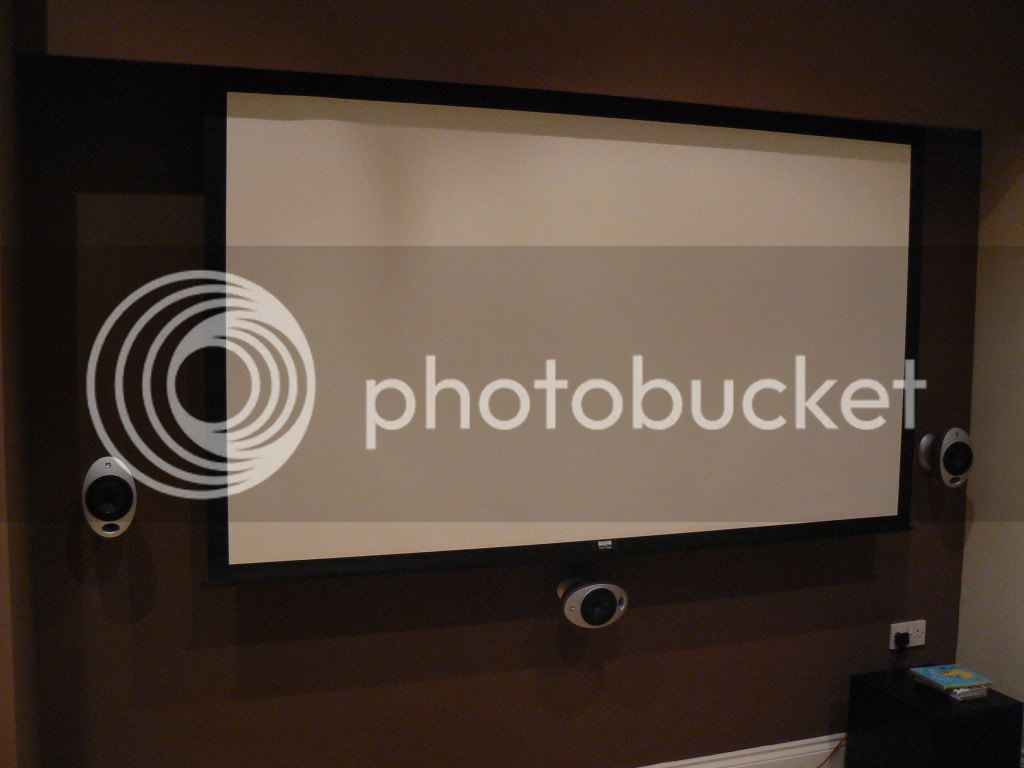 Finished room with TV & PJ up: 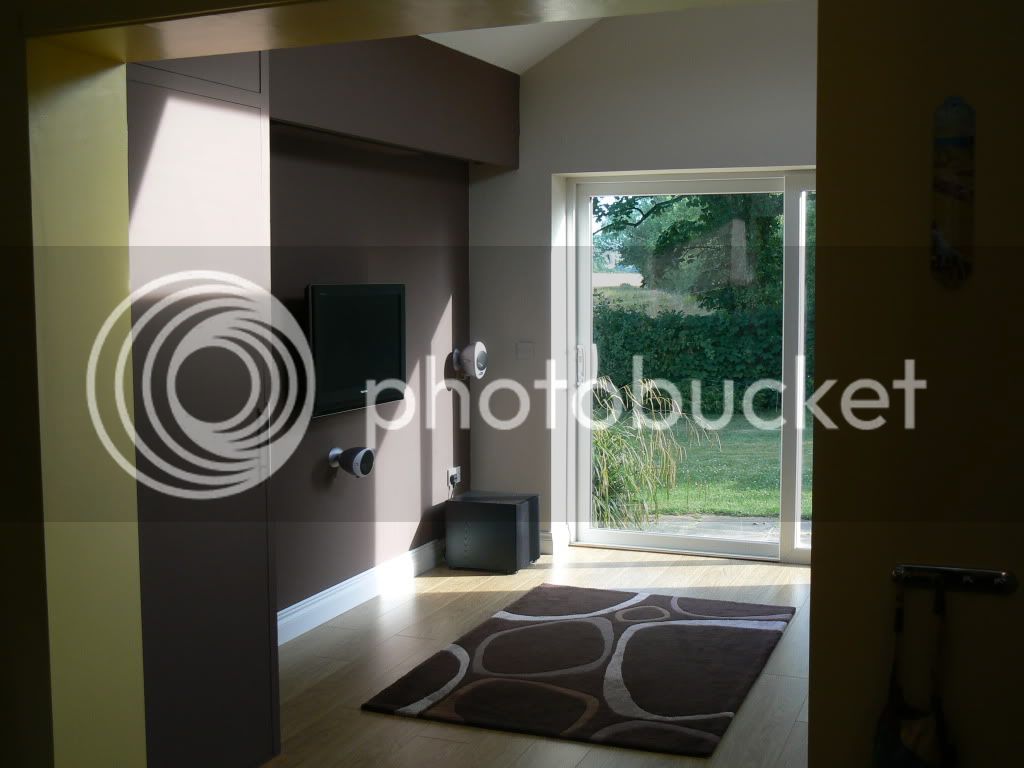 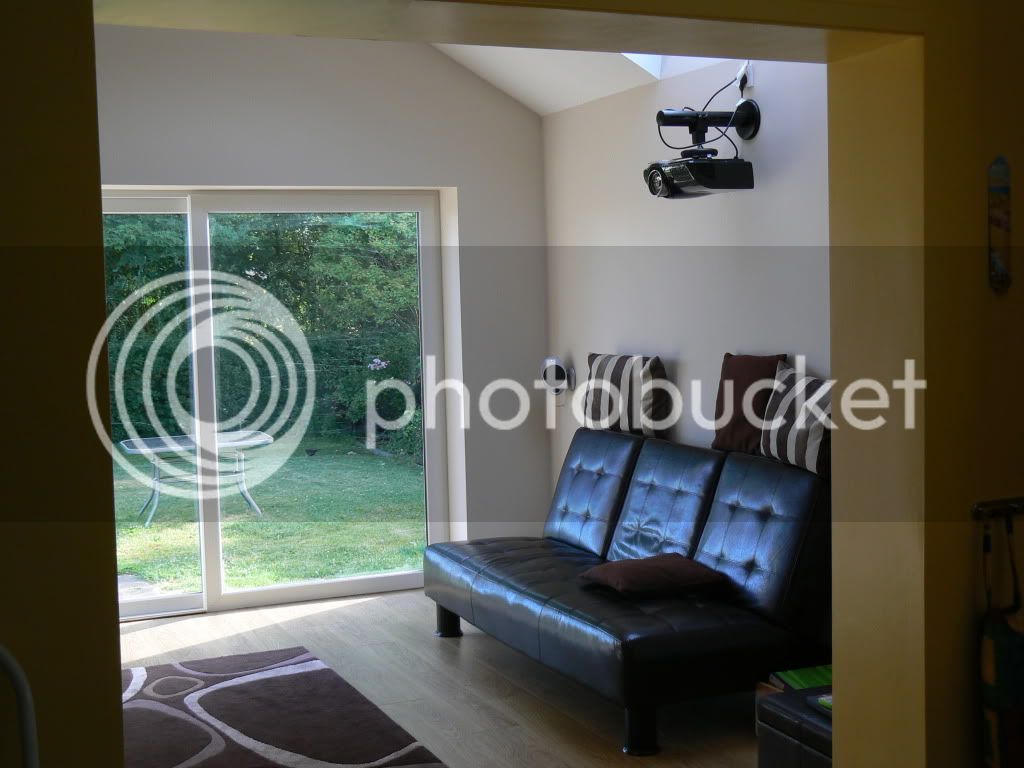 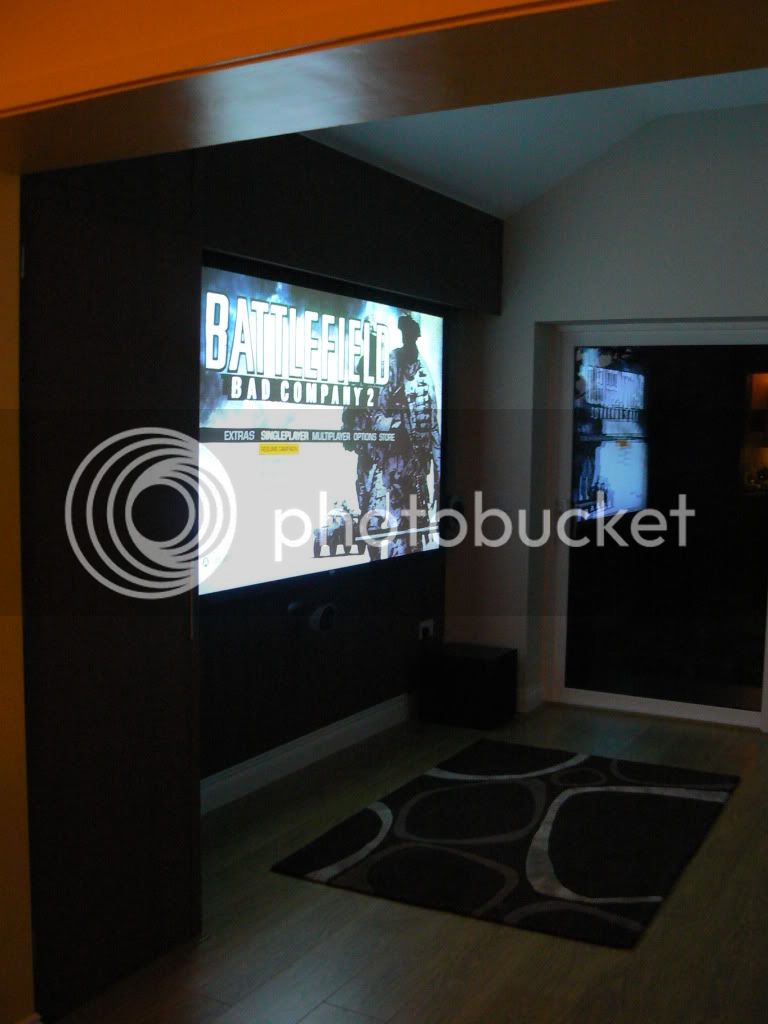 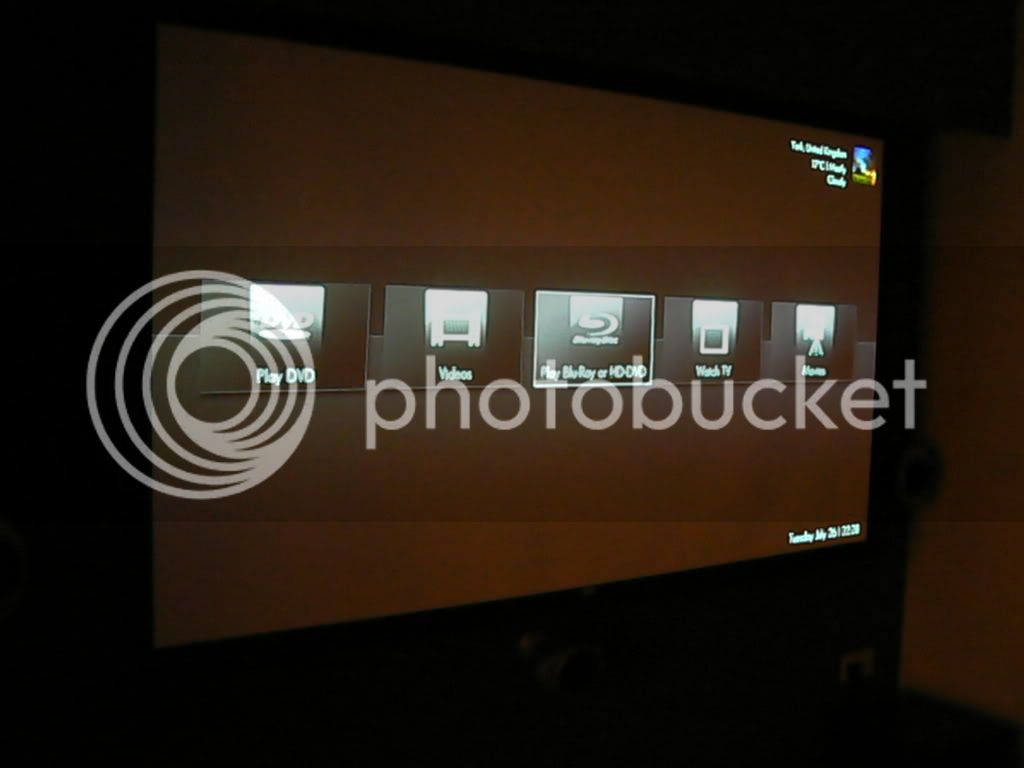 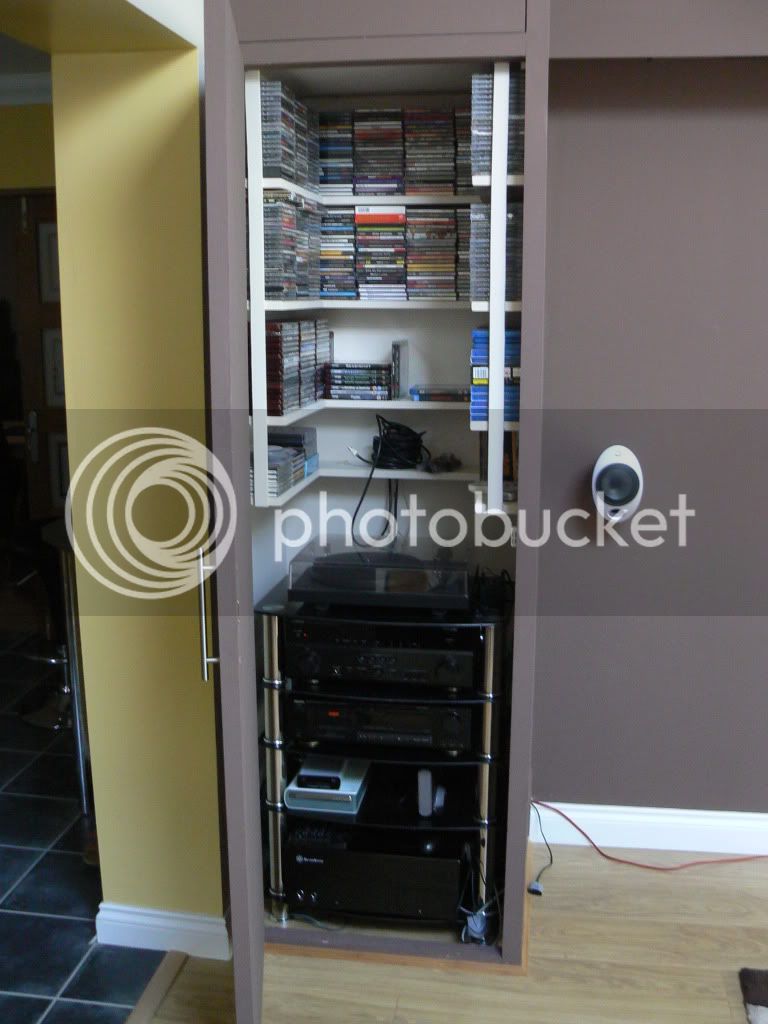 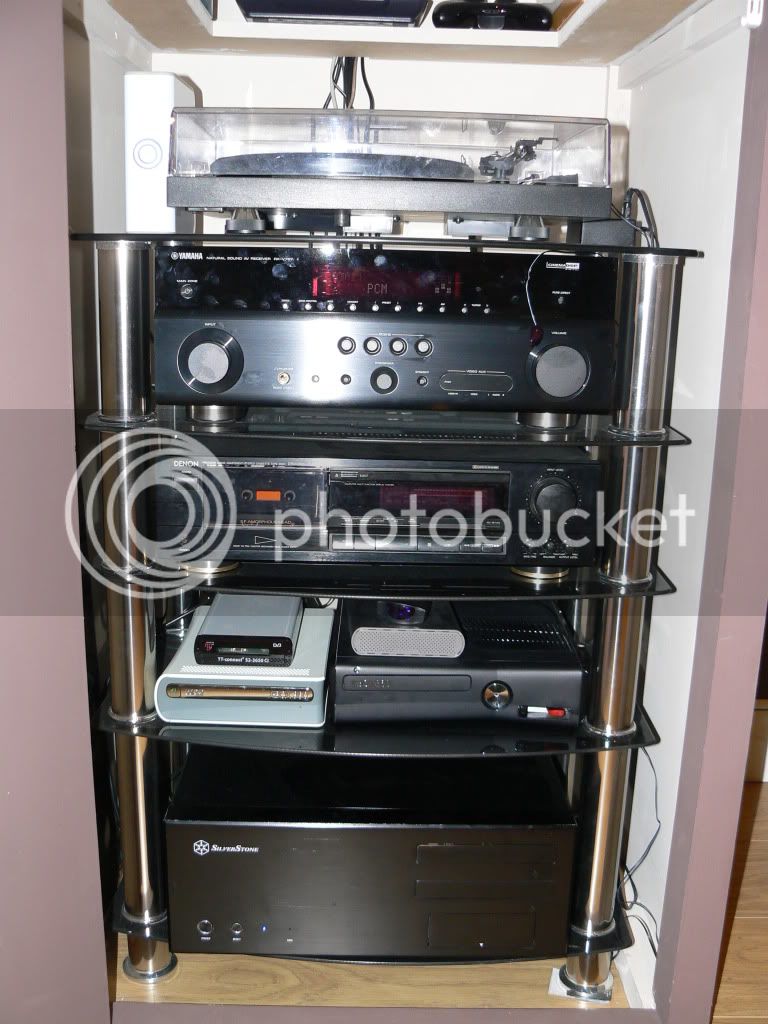 I'll try to do some more pics at some stage once curtains etc are up.
The main issue I have is that the screen is high gain with limited viewing angle, so as the projector is mounted higer than in my previous cinema room its not as bright and the seating position is a little closer than before, so I'm looking up a little more. This also effects the reflected brightness. Perhaps a matt white, gain 1.0 screen will be more effective for a more uniform brightness across the seating positions?

I also wish the room was a little wider, so I'm not as close to the screen but I'm used to it now. To be honest we're getting great use out of the room just as an everyday living room out to the garden. Once the doors and curtains are up it will come more into its own as the cinema, as currently I have to wait for it to get dark !

Anways I hope you enjoy the pics, any questions just let me know !

thanks Darren - the idea for the AV rack seemed obvious to me, easier than building shelves that could take the weight !

That looks wicked....think the only thing your missing is a PS3 ha ha ha

Nice vinyl deck by the way you don't see many people rocking one on their av setups nowadays
PSN - Vausey​
Wanna be a BoB http://www.avforums.com/forums/ps3-clans-tournaments/1497620-avf-band-brothers-bobs-part-vi.html

That's looking really neat mate. We've toyed with the idea of converting our double garage for the last 3 years or so that would give us a really decent sized room for a change, over our existing 5.2m x 3.2m room. Difficulty we got is that we can't extend on this current tent that we live in and the immediate neighbours aren't at all happy that we want to modify our garage as more than half of it is actually in their garden.

Still.....next time we move, I'll plan it all properly.

Now that looks superb, I bet your well chuffes.

What paint is the TV wall? Love it!

Very nice and clean room, looks great, i love it

Wow what an excellent space really stylish and I'm a fan of hiding kit in cupboards too!
N

Same here what colours are you using on the wall?

Cheers for the comments guys, sorry i've been a way for a few days, but in answer to your questions:

Is your equipment gonna get hot in that room?
Click to expand...

It does get hot, but I've added vents top and bottom of the cupboard and even though the room has underfloor heating I didn't put any pipes under the cupboard. I just need to open the door every now and again to let the heat out !! Its the PC that really ups the heat in there, so I may look to add a fan to the vent !


tonyrees687 said:
Loving the colour on the walls, what colours are they.
Exellent job btw
Click to expand...

Thanks - the colour for the TV wall is Cocoa Bean (I did it in Matt, but i'm going to re do it in Silk as the Matt is too easily marked (2&half year old boy!!). The other walls are painted in Natural Hessian.


Ewan154 said:
Hi,
Very nice Home cinema Where did you get the mount from?
Click to expand...

Thanks - I got it off Amazon for abot £70. Here's the link GTS-6 Contemporary Black Glass AV Separates Stand. 4 or: Amazon.co.uk: Electronics

What paint is the TV wall? Love it!
Click to expand...

nx01 said:
Same here what colours are you using on the wall?
Click to expand...

We have natural hessian and chocolate (i think!) in our room and i do like it......... Went for the matt as well and it does mark very easy, the dark wall does show up any mark.

I especially like the "cupboard for the kit" Once my youngest is a bit older and we have less toys in the cupboard under the stairs i plan to do something similar.

Your room looks awesome top drawer stuff. Oh what subwoofer are using alongside your kefs?

markiedee said:
Your room looks awesome top drawer stuff. Oh what subwoofer are using alongside your kefs?
Click to expand...

Thanks The sub is a paradigm PDR10 ...i've had it a while, it does the trick and to be honest I don't know any better....with all this stuff I'd hate to find out what top quality gear sounds like as it would only bring on a bout of upgraditis !!
My Home Cinema
Let's talk about Six baby .... !!

That is very smart.
http://www.avforums.com/forums/members-home-cinema-gallery/1037373-budget-bedroom-setup.html

@Donnacha...LOL I just left a post on your old home page lol...Ok well all I can say is thank you for the very kind words regarding my little set up, and yes I will keep all informed regarding my demo's regarding the projectors. Buy a popcorn hour, you'll never look back, all that cupboard space taken up with discs, I once owned thousands of Laser discs, dvd's, LP's etc etc...Gone..Popcorn and 11 2TB hard drives and plenty of cupboard space for more crap lol

Cheers Ten80p. I already have a media PC (bottom shelf) that handles all my rips, TV recordings, Blu rays, HDDVDs, Freesat, Freeview, music etc using Media Portal. What would a Popcorn Hour do over an above that?

I have 2TB of storage at the moment...the discs you see are the ones I haven't bothered, nor have the inclination to rip!! Maybe when my sons get old enough they can spend their afternoons ripping them for me to earn some pocketmoney
My Home Cinema
Let's talk about Six baby .... !!
Y

Really nice, like the colour scheme too. Do you get any issues with too much light coming in? Our extension gets a bit too bright around lunch-time and we're now looking at getting blinds for the Veluxes as well as the curtains for the patio doors, and thats just with a TV - I'd imagine it would be worse with a PJ.

Wish I'd convinced the wife we needed a PJ in our extension too but she moaned about money I'd already spent!

Thanks Yoggo - if I could paint the whole room dark I would. i've got blackout curtains up now that help over the patio doors, but light still spills in through the edges. We've also put a blackout blind on the velux which lets no light through.

The next step is door (on order) to cover the entrance from the kitchen, also going to help ! Its getting better and its currently Ok for daytime movive watching, but obviously much better at night !

Surely you can sneak a PJ in over the next year or so with the prices tumbling or some bargain on the classifieds here?
My Home Cinema
Let's talk about Six baby .... !!
Y

Difficult to sneak one in but what I really should have done is get the cables in and ready as part of the build, so that makes it a no-no!

Send ya disc's to me, I'd do them for you. Only BD's thou, DVD is a dirty word in my world now.
You must log in or register to reply here.

N
How to deal with 3.5m by 3m room for home cinema

O
Room within a room for home cinema