New Gatchaman aka 'Battle of the planets' film in 2008

Guys.. if like me you loved 'Gatchaman' or the western watered down version 'Battle Of The Planets' your be happy to hear there remaking the film..

fantastic! something new to get excited about now that Transformers is almost upon us...
We'll defuse bombs, walk marathons
And take on whatever, together.

I loved Battle of the Planets cant wait!!!!
All fixed set patterns are incapable of adaptability or pliability. The truth is outside of all fixed patterns...Be water my friend

Oh my god I think I just did a sex wee

The fact that it appears they've got Alex Ross on as an artist is too much to handle...his work is amazing.

Cannot wait for this now...it's like the 80's all over again & I'm just as excited about all this as I was when I was growing up the first time, it's like a second child hood I love it

Checked out these production and concept images, some of them are CGI if you can spot those, the movie should look stunning

Slated for 2009, this hardcore sci-fi CGI film from HK Imagi Animation Studios has no director yet, as the previous left* - so even 2010 or production hell?. This is being made by the same people that brought us TMNT.

Gatchaman, originated in Japan in the early 1970s as the television series "Science Ninja Team Gatchaman." Aired in the U.S. as "Battle of the Planets" and "G-Force," it soon became a widely popular syndicated TV series.

Featuring some of the most ambitious action sequences ever seen in animation, Gatchaman is set in a future world grappling with environmental and technological issues. The story focuses on five reluctant heroes whose remarkable genetic code makes them Earth's only hope of defeating extra-terrestrial invaders. 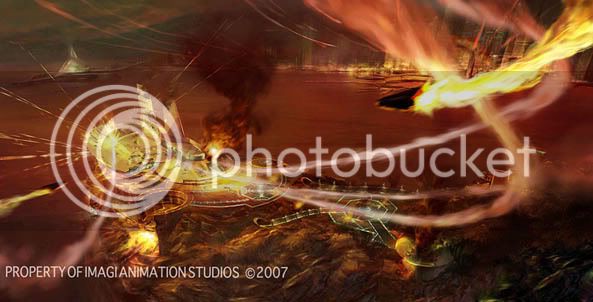 Kevin Munroe (TNMT) was originally too direct Gatchaman, below is snippets from a interview with him in December 2007 before he left the project.

Kevin Munroe: Y'know, I put in quite a few years at Imagi, and we built something amazing on TMNT with a group of talented people out of a basement in Encino. It was a blast and I am thankful to have done it. With Gatchaman, I guess you can say it came down to creative differences. I'm a little heartbroken to walk away, as I'm still a huge fan of the property and its potential. But I'm glad that at least we got to share a little of my version of the movie in those images we released last year. At the end of the day, I wish Imagi the best of luck for the future.

ON FILM DIRECTION:
- "stay as close as possible to the original versions but at the same time add some sleekness to it so it's not just &#8220;tights.&#8221;

- &#8220;I try to describe it to people, it's not cartoon-ey and it's not photo-real. It's really pushing the western style of animation, something very cool and different.&#8221;

- &#8220;Fans of the tv show will remember that they never talked about how the Gatchaman started, how the war between the Gatchaman and Galactor started... What was the first invasion like&#8230;&#8221;

- co-director Tom Tanaka adds: &#8220;So this is ... the prequel to the TV show in a sense, and the idea that the mythology of the Gatchaman is not just restricted to technology, there is a mystical aspect as well.&#8221;
Click to expand...

ON CHARACTER-POINTS:
- &#8220;We've got a couple of key characters, and bad things happen to them, a key character dies at one point..."

- The Phoenix (Gatchaman's mothership) "flames up" and comes complete with signature bay doors, and it's not completely re-imagined or redesigned, but it has a modern and &#8220;fast&#8221; look and feel ... the flame transformation of the ship comes at a pivotal and climatic point in the story.
Click to expand...

- &#8220;We've got politics, terrorism, the island is the beacon of hope and the Gatchaman become the symbol of that hope for all of mankind because it takes what happens in this movie to united everybody together to fight back. It's bigger than just a simple alien invasion story&#8230;&#8221;

- "We find our heroes at the end of Act 1, with a completely destroyed city after the aforementioned alien invasion. There's no place to go but bigger! ... Act 3 blows the invasion away."
Click to expand...

First 11 Sec Teaser - all that time, and that's it

The team in ISO lobby, Joe was arrested by ISO solider.

For sure you know who is playing yoyo. The city look is inspired by HK

Phoenix in Utoland, mission start! This Phoenix is a still work in progress version..

What's the situation with the original animated series? Can you still get the original Japanese versions? Do they have english dubbing?

I have fond memorie of BotP - but some Youtube videos remind me its old and aged - but still a great show.

A remake/update sounds like a great idea, but looking at those shots for me it doesn't look great. Somehow they look like "video game graphics, maybe because they are stills and a video would do it more justice?

Not sure... A lot of CGI these days seems to be going a bit cheap and not-so cheerful...

mattrixdesign2 said:
I have fond memorie of BotP - but some Youtube videos remind me its old and aged - but still a great show.

A remake/update sounds like a great idea, but looking at those shots for me it doesn't look great. Somehow they look like "video game graphics, maybe because they are stills and a video would do it more justice?

Not sure... A lot of CGI these days seems to be going a bit cheap and not-so cheerful...

Yeah know what you mean, only Pixar seem to do it right with their original films. Human characters in CGI movies at times can come over a bit boring after hr or so, and yes these stills do look to clinical, and wonder if a live action movie would off been better, and can relate more to the characters.

There is no real reason with todays green screen advances that could not have happened with the cgi company providing the back grounds and effects.


But we have been told for the CGI film is going to be a technical achievement in terms off detail and animation, so wait and see, but that don't mean it wont be boring, but being action orientated should be fun and look great.. 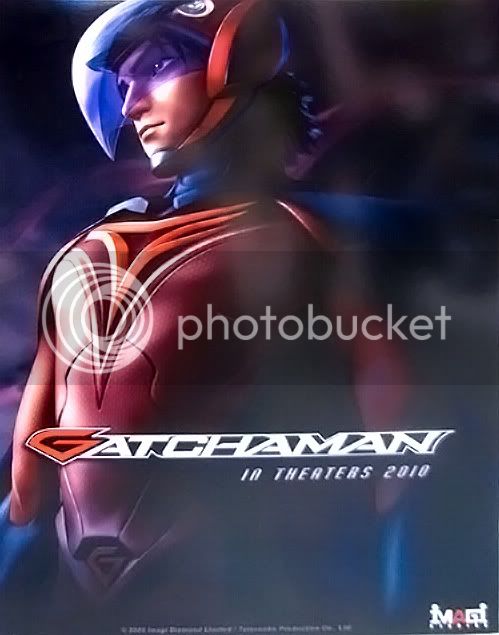 erm
check out post 8 and the date....
I've come to realise that having a toddler is like having a blender without a lid 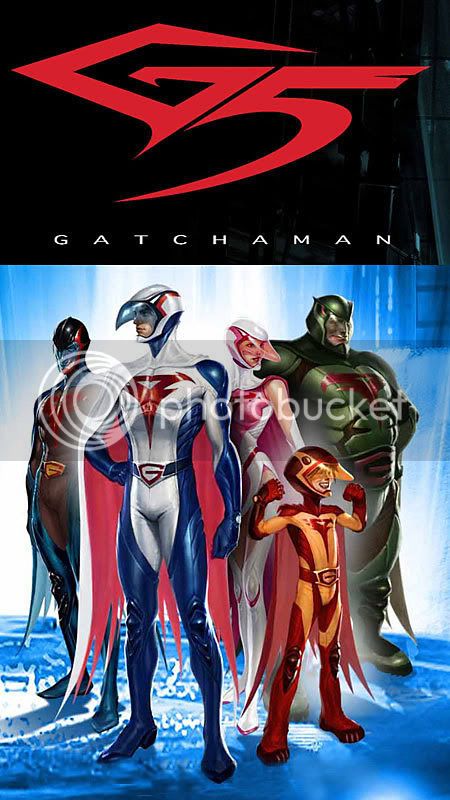 We wait years for the Gatchaman, looks like it may never happen, hopefully it gets sourced out. Sad the studio had to close. Astro Boy was the final nail in the coffin, only making $19.5 million in the US on a $65 million budget.


HONG KONG &#8212; The Hong Kong studio behind "TMNT" and "Astro Boy" has shut down as its parent company tries to recover from losses.
Imagi International Holdings Ltd. said in a statement to the Hong Kong stock exchange that it stopped funding its computer animation studio on Feb. 5 "to further preserve its limited liquidity and shareholder value." The studio will ask a Hong Kong court to name liquidators, the statement issued Monday said. But Imagi said it will continue to develop movie ideas and outsource the actual animation work to mainland China and other countries, where costs are lower. Starting out as a Christmas tree manufacturer, the Hong Kong company went into computer animation in 2000 and was touted as a successful transition to a high-tech economy. In 2007, Imagi released its first feature movie, "TMNT." The English-language production based on the characters from the Teenage Mutant Ninja Turtle cartoon series in the 1980s earned a solid $95.6 million worldwide.

But Imagi's second release, "Astro Boy," fared poorly last year. Despite hiring an all-star cast including Nicolas Cage and Samuel L. Jackson to voice the characters from the Japanese comic book series by the same name, the film only made $23 million worldwide. In its latest financial results, Imagi said it recorded a net loss of 726 million Hong Kong dollars ($93.4 million) for the six months that ended on Sept. 30, 2009 &#8212; just before "Astro Boy" was released in October. Imagi also owes some HK$36 million ($4.6 million) in back pay to the 350 employees it laid off, Hong Kong's Apple Daily newspaper reported on Tuesday, citing labor organizers working with the former employees. A woman handling press calls for Imagi said the company had no comment pending a further statement to the Hong Kong stock exchange. She declined to give her name.
Click to expand...

It's strange really isn't it? Making the movie costs a lot of money with expensive voice actors, but Gatchaman must have been nearly ready for release. So at this point in time Gatchaman should be over the peak of its expenses, and into the point where it is on sale, and making money. Surely you don't need expensive voice actors, and surely pressing the discs is accounted for in the costs on production. If a film is about to make money instead of cost you money, you release the movie before you go bankrupt.
Einstein famous for not being very good at math. Pincho, useless at math, making me a better Genius. Actually, I can do math. Einstein said E=MC² I say Energy In = Energy Out, accurate to a point not a square. Newton?, you wouldn't catch me sitting under a tree with apples dropping on my head.

The fact Imagi Animation Studios closed down the L.A. branch earlier this year does not mean Gatchaman will not get a release, its seems likely a direct to dvd as the Hong Kong branch is still operational.


Here's a early look at the film

I just want a subtitled release of the full length Japanese anime from the 70's.
I've got the box set of Battle of the Planets because I loved that as a kid but it's pretty poor as an adult, especially when you know each episode was heavily cut down, story altered and the Americans introduced the fill in segments themselves.
My Stuff: Philips 55OLED754 - Sony PS5 - Denon AVR-X2300W A/V - Monitor Audio MASS v2 & Yamaha NS-IC600 5.1.2 Speakers - Manhattan T3-R - Apple TV 4K​

Footage / pre-vis from the abandoned project

I used to love watching BotP when I was at school and didn't have a clue that the original show was called Gatchaman. So the G-Force thing was invented for the western audiences as it explains why they had a G on their watches.

You learn something new every day.
You must log in or register to reply here.

What a long but satisfying result - meet my new boy
2