Hello, I’d like some feedback if anyone has any suggestions it would be greatly appreciated. I’m setting up a mobile incident command center for work in a large trailer. At times we may have 2 or more laptops that we would need to extend their respective desktops to anywhere from 1-4 tv screens that are mounted on the walls. One scenario would be: 1 laptop is running with an extended desktop to all 4 tv monitors on the wall. Another scenario would be: 2 laptops running and each has an extended desktop on 2 wall monitors. A final scenario would be: 4 laptops running and each has one extended desktop to wall monitor. At a minimum we would need to be able to accommodate scenario 1 and 2. I’ve read about 4x4 matrix splitter switches but as far as I can tell they only mirror the inputs and would not be able to extend the desktops.
F

depends on the laptops, for 2 things - the graphic cards ability e.g how many screens can it drive at once and the connections it has to do this. Most laptops have 2 outputs so connecting two monitors is fairly standard practice, moving to three gets more interesting as you need to ensure it can actually drive 3 and if so you need to check how, e.g via a docking station or using daisy chaining.

For example if they have a USB C output and the monitors have that also you can daisy chain them from a single connection to the laptop but this is only on recently monitors and laptops. Display port can do this also with the connect monitors. How many, depends on the laptops I think. 4 screens is a lot of pixels so I would check the the laptop maker on if it can do that and if so how. 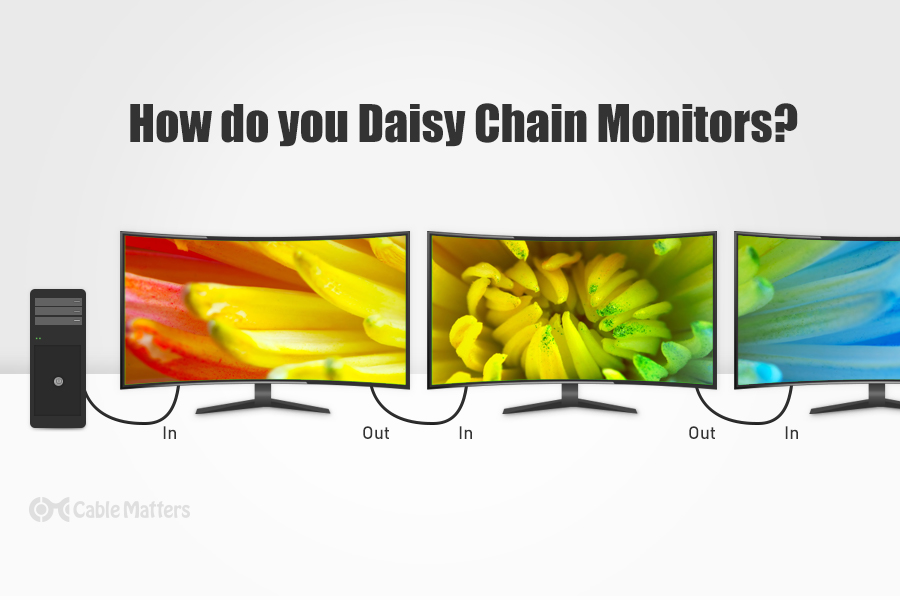 Nothing clutters up a desktop like a maze of cables running everywhere. Learn how to daisy chain monitors to cut down on the cable clutter on your desktop.
www.cablematters.com

hopefully you havent bought the laptops already as if you have then you will need to confirm there ability to run multiple screens extended.
J

Totally agree with @Fe_man2000. My current laptop can only run 3 monitors max. I can run only 1 from the laptop since it only has one Displayport socket. I would have to use a docking station, which I do in the office.

The "splitter" option is generally for use when you want to have the same image on more than one screen, or increase the number of inputs if for example, you wanted to share one TV with two laptops, but the TV only had one HDMI input... which from the sounds if it, is not what you want to do, so I can't see that being of any use.

It sounds to me like you need a docking station for any laptop you use, in this mobile rig and the laptops/docking stations will have to support 4 monitors.

One final thing to note is that both Docking stations and Laptops can come with a variety of outputs for video, whilst TV's generally come with HDMI> You may find that you will also need some conversion cables to support this setup. I don't want to necessarily put you off but this in itself can sometimes be a challenging technical problem. I have often found that outputs from dockers and laptops do not behave as either the specifcation says, or how you would expect.

A Matrix Switch will allow you to direct each input to a different screen but it won't intrinsically allow you to drive multiple screens from one input so you'd four outputs from each laptop going into the switch - if you're wiring it up to four different locations you're potentially dealing with 16 inputs to switch between.

You could also make sure of the screen's build in switches, if it's controls are accessible. For example if each screen has four inputs then you could route one to each potential laptop position .


The feature behind both daisy chaining and (some) hubs and docks is called MST, which is a feature in the Displayport standard that allows one port to have multiple independent screens connected, up to the maximum bandwidth of that port.

I believe it's also limited to the total number of displays supported by the computer's graphics chip - Three for the most common Intel graphics.

Which Intel® Core™ processors and/or Int

Will you be speccing the laptops too, or do you know which models will be used? DisplayPort support is common but far from ubiquitous while alternative manufacturers of graphics chips aren't as common.


If you need something that works with every laptop then external USB graphics chips are probably the way to go, technologies such as DisplayLink (not to be confused with DisplayPort). They're not quite as smooth as a normal video output but unless you need low latency they're often good enough.

4-way ones aren't all that common but you can use multiple ones, the DisplayLink software supports 6 screens on Windows and 4 on Mac OS:

(I don't think it supports ChromeOS, as found on Chromebooks, but I'm not sure if anything does).

These are often called docks as well, and confusingly those docks with the new USB Type C connector can operate their video outputs over either MST or USB as USB-C has an alternate mode which allows it to output a DisplayPort signal (which is optional, but common enough plenty of things use it).
You must log in or register to reply here.

B
Help with multiple cable box inputs into AVR-S960H

Apr 23, 2021
bulldogblack
B
J
Using a 5M active USB extender cable between my machine and a USB docking hub (with lots of stuff plugged into it).