For a Slideshow, you can click here instead of having to read the whole thread lol:

The floor tiles are 60 x 60cm Italian Polished Porcelain - dealer not with us anymore.

THE WHITE AV UNITS ! You can achieve a similar look, by going onto the Dwell or similar website - look for white gloss tables, and just don't put the legs on....Voila !

WALL PANELS - These are 18mm MDF, that we had machine cut. They were then painted and glued to the wall using wooden batons as spacers. 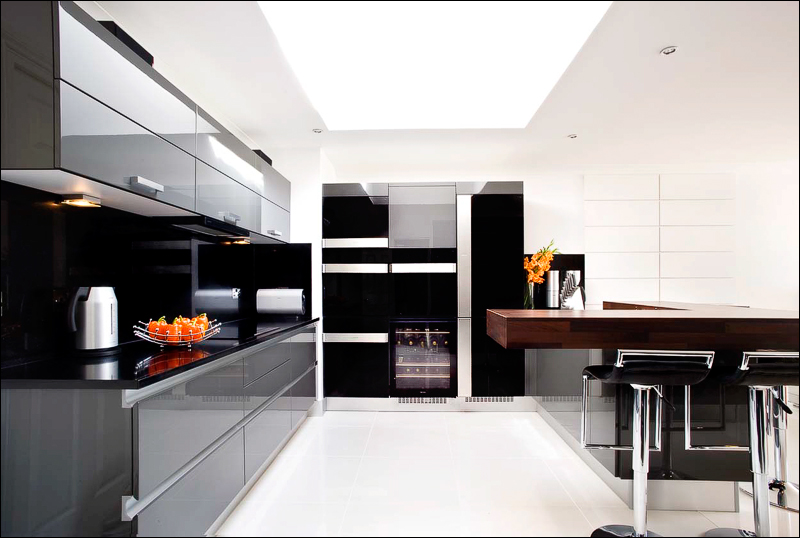 Pc Room: (The walls are Dulux Rum Caramel 4 , and one wall is Cocoa Blush Number 1 )

Very impressive - love the whole lay out of your place with the open plan. The bedroom set up is also amazing and two PS3s!!

Superb - gives me some inspiration for my next task -converting the garage into a home cinema!
S

Hi The Force, nice to see you made the jump to this forum. I say again you have a great set up, very much my kind of thing. We are about to convert our kitchen and dinning room into a large kitchen dinner and it will be a similar style to yours, all white with glossy white kitchen furniture and corian worktops etc. Can I ask do you have underfloor heating?

many thanks you lot @ streetrod - has someone finally realised there are no radiators in the lounge??!!!(we ripped em out) we looked at underfloor heating initially, but the electric variety was gonna be far too expensive to run, and the quotes for the water variety,well they took the **** basically because there was nowhere for the manifolds to go so there was gonna be too much work involved......therefore we went with a flueless gas fire - instant heat, don't need a chimney stack, 100&#37; efficient(you lose alot of heat up a chimney), actually cleans the air in the room with a catalytic converter and looks nice lol
My opinions are held entirely responsible by AVForums...they made me type them.
________ My kit pics ________​

If you add me, please let me know you are from AVForums, I tend to ignore the requests from Xx45XXxxX8Player

where are the wall tiles from and are the floor tiles the same ? also speakers look sexy what are they.

cheers you lot!.the speaker cables are buried beneath the floor, the wall panels we got a carpenter to cut 'em for us then we put them up. The floor tiles are Italian polished porcelain.

Lovely looking room The Force - loving the clean lines and the simplicity of it all.

You really should rename this thread as 'My lots of effort'!

great set-up, you must have spent a small fortune! is the coffee table from ikea? I am thinking of getting that one.

also do you have any pictures of your home before you decorated it?

You clearly like Swedish furniture, i've spotted volumes of bits from Ikea.

Very impressive indeed. Are you in the Uk?
I like the velux style window in the roof in your kitchen, brings in lots of light.
I assume you don't have children and have recently decorated. I was going to consider laying down stone flooring but was put off by the suggestion that it is very very slippery when wet. Absolutely love your project.
Must say though that you've got a harmony 1000 remote control but seem to have compromised on your choice of screen in the lounge and speakers. Wonderful work in any event and i'm sure i'd need to take out another mortgage for just a metre of that flooring that you've had installed!
My Set up:Sony HW50E PJ, Darbee Darblet, ISCO II Lens, Well endowed 4.4metre Scope screen, Onkyo 818 AV receiver, Bryston 9BSST Power Amp, MK S150 THX LCR, MA RS6 Front Wides, MA RSFX Rear Sides, MA Bronze rears, BK Monolith Sub x2,HTPC with 12TB server.
My Dedicated Home Theatre
P

actually your kit (no offence) isnt mega expensive nor is the furniture its just done so exellently and choosen with care that it looks 10x the price and proper high end.

bit too miami vice ? a little, but i think its very nice indeed.
Calibrate to Appreciate
O

I take it that's a flat your in as the kitchen is of the lounge?? You've done a superb job with the space, very well selected furniture and kit. What's the PQ on the Sagem like? Didn't even know they made telly's!
I also think you got the right solution with a gas fire, look's great and really desginer and I bet it's a lot cheaper then having underfloor heating?
T

many thanks everyone for the great feedback - I feel rather chuffed!
the coffee table is indeed from Ikea: link -

http://www.ikea.com/webapp/wcs/stor...20&categoryId=15799&chosenPartNumber=90103720
It's amazing how many DVD's you can fit in the drawers!
If it does look like Miami Vice then that's made me day (big fan of interior design)
The kit isn't high end gear as that's not what we wanted - to be honest it would be wasted on us. What we went for was mid-range kit, and after doing alot of research, and reading reviews from the professionals, we got what we believe to be the best product in each of it's respective price category.

That's why I'm afraid I have to disagree that we made a compromise on the TV and the speakers. Anyone who owns a 56" Sagem will tell you that when fed HD material, the picture is simply stunning - especially considering the screen size. Also currently there are no speakers available that can match the Duo Acoustics for their price. You buy them direct from the manufacturer and so save about 50&#37; than if you were to buy them retail. They really should cost twice as much! The real winners are the main front towers, which are extremely fast and crisp - and the sub, which manages to seperate the lower frequencies without any probs.

To Apolloa, yea it's a top floor flat here in good ole Blighty.if you read down the page a bit - you'll see I made a comment about the underfloor heating
Once again many thanks for the positive feedback folks!

Sorry if i offended. I agree that the Sagem is a good telly but its still a rear projection. A rear projection tv, attractive looking but in your own admission cheap speakers just dont sit right in my opinion with a Harmony 1000 remote control. That being said however your on a forum with AV enthusiasts who 'know their onions'. Anyone else wouldn't question your choice at all.


effing hell mate, it's bloody excellent....that's what I think about your little effort!

When are you coming round to sort my place out? Reckon you could do with a hobby!
T

many thanks BreakersRevenge(named after one of me all time fave tunes I hope??!)..and Bretto lol..when I first read your post I thought you was gonna say "I think it's ****ing *****!!" - though I could do with a hobby (shall I make your place look 'sterile' too?)
Jagdeepp, no worries. I don't easily offend, and I hope you don't either. Nothing wrong with expressing your opinions - though I feel you may be slightly misguided or misinformed. The Sagem cost us £2700, albeit 18 months ago, and the speakers were £850. I don't remember admitting they were cheap - maybe in your world that's cheap, but definately not in mine!(unless I'm in the millionaires forum - am I?? ). The Logitech 1000 was £220. Now I could see your point if we owned, say, a £1k philips pronto, but I think the Logitech fits very well into our 'mid-range' setup. I've spoken to a load of Harmony 1000 owners with alot less than I have!
As for rear pro's - some rival, if not better, the competition - Plasmas and LCD's included. A fine example is the Sony KDS-R70XBR2 70". Ok, you may not be able to wall-mount them, but it's the picture processing that goes on inside the box that counts - not what the box looks like.(Although the sony is a designer's dream )
I thank you for your comments and hope you ain't taken any offence either.

It looks very futuristic, but also very simplistic and smart

Forgot to mention - loving the "Jackson Pollock-esque" print and the lamp next to the chair (near the kitchen area) ...where did you get the lamp from??

Great job all around The Force
Woody

can I ask did you make the wall tiles yourself or did you purchase em ?

Have to agree with everybody elses comments - A fab setup!

How does the amp manage with all the reflections you will get from the tiles? Can the Yammy compensate effectively, or maybe you are looking at the Audessy EQ unit?

My Little Bat Cave - Bigger is not always better!
2