- "early 2018"
- World-wide servers. So no more region-locking, which should mean better player numbers in general
- 4 player co-op, drop in / drop out
- grappling hooks (unknown mechanics)
- camouflage
- seamless map, no loading areas
- dynamic day/night cycle
- mentions "ecosystem", so maybe a bit more realism on environment and animals interacting with each other?

My immediate reaction was, this looks/feels a little different to what I was expecting. But still, I'm just very happy that I will get to play Monster Hunter on either the PS4 or PC!
S

Here's all the summary info that has been captured on GAF.

Huge fan of the series and saw the single player theatre demo at E3. I came away feeling this is definitely a traditional Monster Hunter made "next-gen". Here are my notes:

+ Health and stamina bars not always visible
+ Use items at near full movement speed
+ Can lock on to monsters and quick turn camera like 3DS
+ Scout flies replace paintballs and show both trail and location
+ you activate scout flies by finding residue from a monster and taking samples, seems you can get enough to make it permanently on
+ Minimap can zoom to zone
+ Map still segregated into numbered zones, more interconnected, and no loading between them. But moving between zones is generally via narrow corridors
+ Slingshot used a lot for luring monsters
+ Traps and flash bombs built into environment, maybe still consumables available?
+ Some kind of paralysis inducing consumable knife
+ Monsters have a lot of cool animations for fighting each other, picking each other up
+ Mounting works like 4U, but you can move between mount spots. Also some way of eventually doing an attack
+ Great Sword moveset looks the same, but the effects for charge were much less intense audiovisually
+ Cutting tail looks hilariously exactly the same
+ Can use hookshot thing to repel down surfaces
+ Two new large monsters - the TRex and the frog thing
+ frog thing regurgitated some food it ate for little monsters to enjoy
+ had some way of summoning the flying monster to take you to base camp at seemingly any time
+ change weapons and armour at base camp
+ had a Palico buddy complete with its own weapon armour
+ HBG looked like it could always move slowly while shooting
+ HBG machine gun thing seemed like a special mode, depleted a meter
+ HBG had many ammo types and traditional ammo switching mechanics
+ sharpness meter was visible but never sharpened
+ gathering plants was instant with no animation
+ carving was slow
+ the demo had really aggressive tutorializing with the quest giver talking to you throughout and her head popping up on the right of the screen


Source 1: TwitLonger — When you talk too much for Twitter
Source 2: 『モンスターハンター：ワールド』ではベースキャンプでの装備変更が可能。ペイントボールが撤廃！

There's sourcing for everything at the link.

Sorry for late reply, it's a private demo you can sign up for at E3. Four developers from Japan playing the game unscripted (they were unable to defeat Rathalos lol).

And the older info: 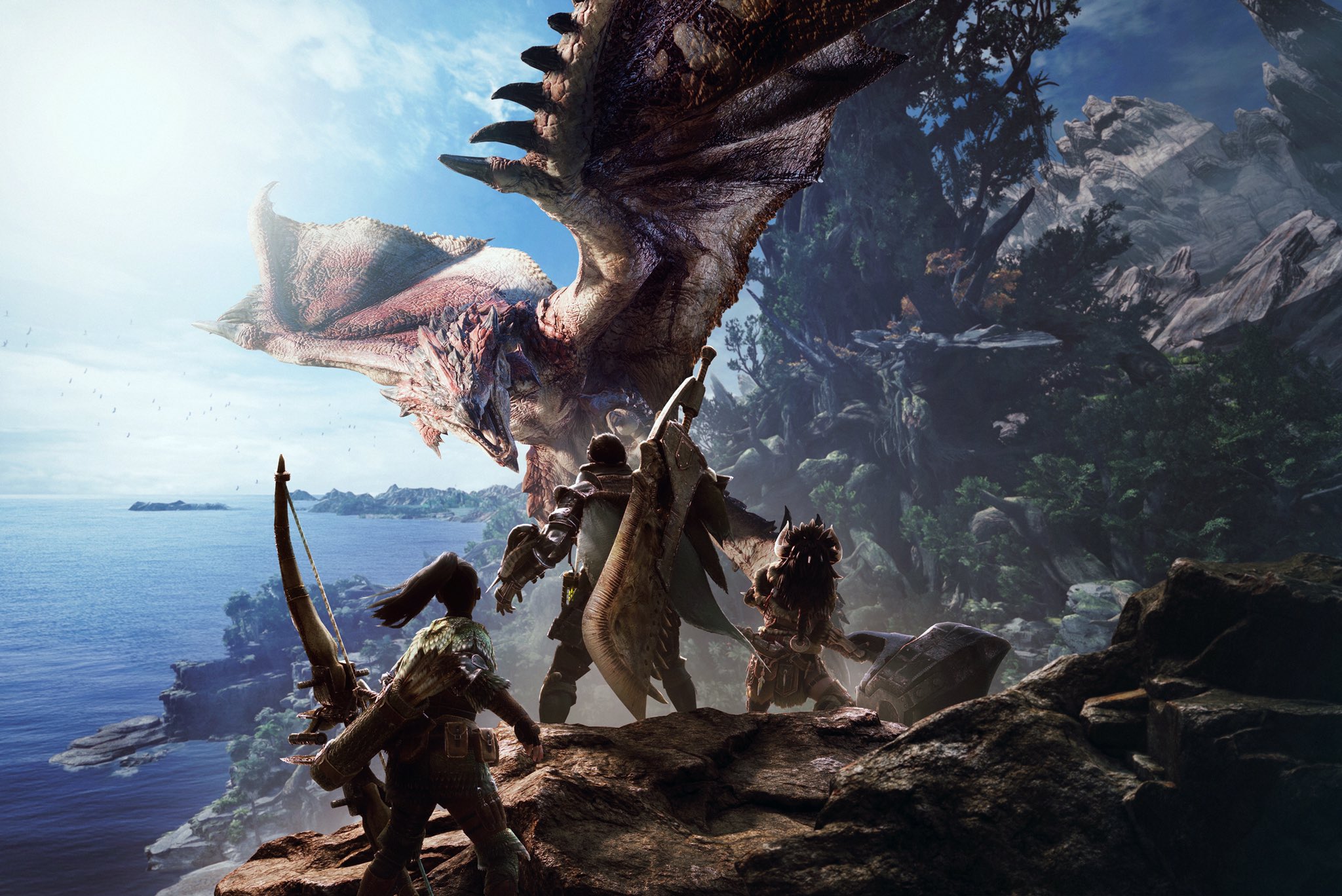 And a gameplay video with English voice-over explaining mechanics and stuff:

Having last played on PS2, there's definitely some features from Nintendo games he talks about as "same old" and "returning" which are totally new to me...
Gaming tag = Stinja

Poop. Thought i'd have a go, but the beta doesn't start until 5pm GMT

Did spot more info when trying to find the start time:
6 things you need to know about Monster Hunter: World’s PS Plus beta, live this weekend

Anyone else up for some hunting?
Gaming tag = Stinja

Stinja said:
Poop. Thought i'd have a go, but the beta doesn't start until 5pm GMT

Did spot more info when trying to find the start time:
6 things you need to know about Monster Hunter: World’s PS Plus beta, live this weekend

Anyone else up for some hunting?
Click to expand...

Mrs is threatening me with a chick-flick... i'll be on when I can though.
Gaming tag = Stinja

Anyway had a go later, solo'ed the three missions; but seemed harder co-op with a mate.
And how bad is the "Quest ID" stuff? Feels like a hangover from Nintendo handhelds, and not having real friends lists + invites.

I used to main hammer on MH(1), so enjoying that. Best time on mission 1 is just over 3 mins (with some flower picking):

And the 3rd mission, where I spent so long chasing back and forth:

EDIT: there is a lot to take in. I keep forgetting to target lock; the crafting looks extensive (not done any); item/weapon/armour combos for effects vs a monster's particular weaknesses; not used any traps, I recall them being kinda like Horizon Zero Dawn; and so on.

Certainly a positive demo, but i'd like to see if they can put in a modern lobby system and party invites.

The co-op via sharing the Quest ID with friends is a bit inefficient. However, once they were in, the experience was very smooth.

Anyway, I really enjoyed my quick session on this. They offer a training mode so you can test out all the different weapons and combos. The map was bigger than I expected and there was so much to gather, I got sidetracked from my actual mission at first. Graphics are good, as are the animations of your characters, the monsters and also your adorable little palico cat, (who gets out a little boat to ride on if you walk through water). I found the UI a bit overwhelming, I've never played an MH game before though. After a few more sessions I'll probably be fine with that and also the controls.

Got my dates wrong - thought this was only available today. Downloading now.
Soundcloud: LINK

Trying out the Hunting Horn:

Quite like it, similar-ish to the Hammer, but you trade raw damage to instead buff the party with tunes.
If you ignore the time spent running out, the actual fight was only 7 mins long; which is pretty comparable to my Hammer time I think.


EDIT: more info on the matchmaking, the full game is NOT like the beta
You can form squads of 50 players, and be in 8 squads at once. Match-making via friends requests is an option! 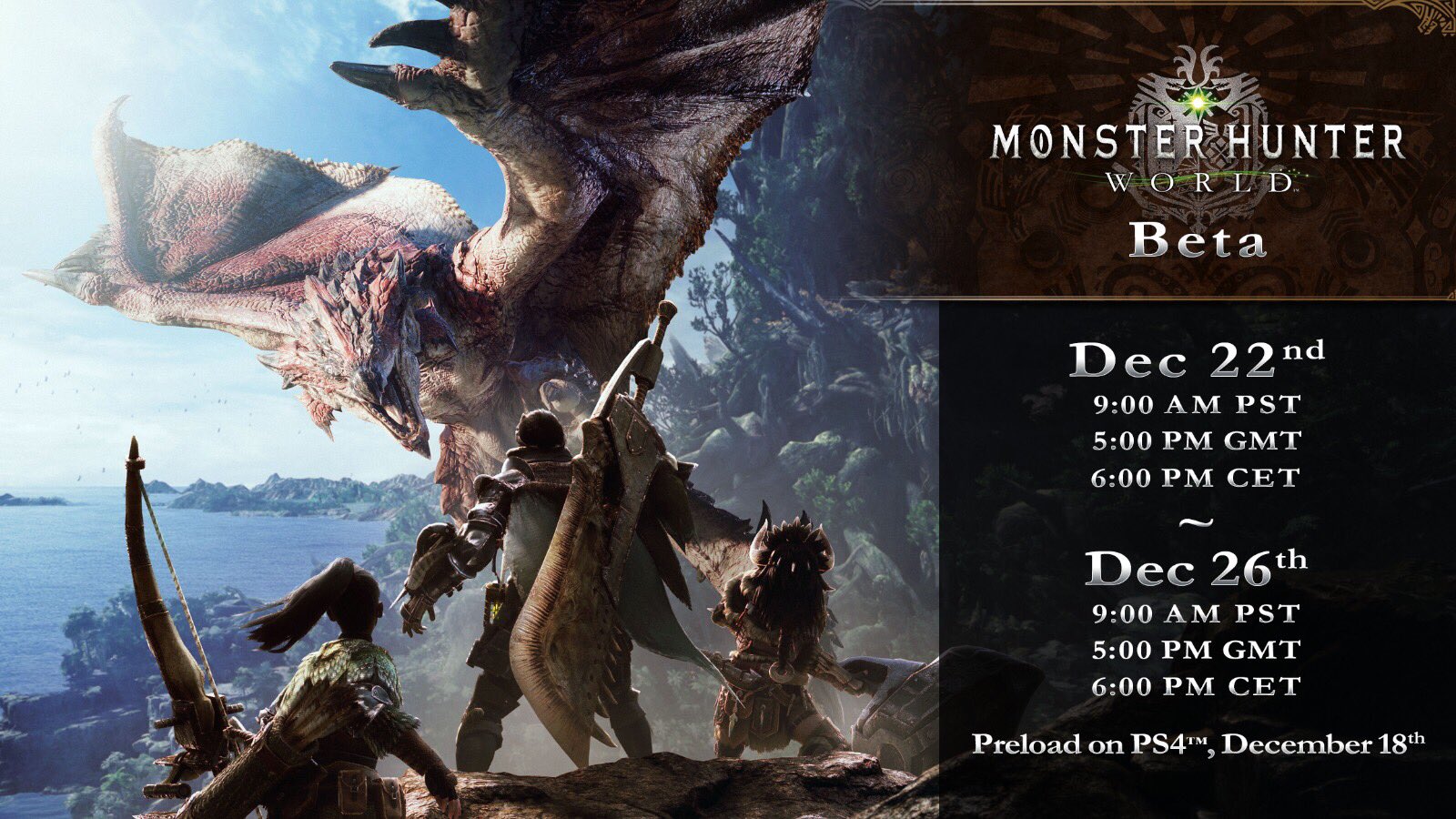 So it seems like the demo is pretty much the same as the last one, but without the PSN+ requirement. I guess they really want to hammer the network to stress test it?
This means you do not need to delete and redownload if you have the first beta.

Also to remind people that the beta is kinda limited, and the full game features much more in the way of crafting, tactics (all monsters had reduced health apparently), and way more monsters.

I really enjoyed the beta, and will likely be playing more to test other weapons and so on, so if anyone needs a hand with explanations or hunting I can try to help out.


Lastly to give an appreciation of the amount and size of monsters in past MH games, here's a vid

Not sure if there's going to be a 4th mission, rumours seem split, but probably don't delete your old beta if you want another go.


EDIT: Japanese livestream breakdown, with English commentary. They show the lobby stuff about 11 mins in:

I gave this beta a go and though certainly interesting, i don't think it gels with me and my taste in games.

and on that earth-shattering news...

Kinetic Frenzy said:
I gave this beta a go and though certainly interesting, i don't think it gels with me and my taste in games.
Click to expand...

I will say, to anyone who tries the beta/demo, that it's only a slice of what you do. It misses out on the more tactical elements, the crafting, looting, the social stuff. The combat at higher levels is more like Dark Souls (and predates it) so is a lot about observation of enemy moves, timing attacks, dodging, hitting weakspots, and so on.

Here's a video which gives a good overall intro to the series, and MHW:

I'll probably watch people play it on twitch and see if it piques my curiosity any further.
PSN Name: Kinetic_Frenzy