Money and Christmas and Stress....

Not sure what I hope to gain from this other than a vent of some sort....

First of all, its Christmas. 360 days of the year im very very careful with money, some would say "tight fisted" but for a few days before I go mental, spending heaps of money on my family and girlfriend as I generally get more excited now watching others open their presents than I do opening my own.

This year we started the Christmas shopping early, hoping to get most of it out of the way before the mental rush and I managed to get the majority of it done by around December the 10th.

My Girlfriend has been off work ill for the past month and we have only been getting her SSP which has dropped our income a fair bit, not to worry though we have money in savings and we should be fine....

Then Monday (the 12th) My dog isnt doing too well and has some yellow/white disscharge from her privates, not great. I book an appointment at the vets and expect to be buying a course of antibiotics.

I'm then told she needs to go in for an emergency operation and will likely cost £600 minimum, if there is no complications, I book her in and take her to the vets on Tuesday morning. We are hoping to get her home the same day and phone back at 2pm to check her progress. we are told she went through the op well and is doing fine, just a little dozy from the general anesthetic.

We phone back at 4pm and again at 6pm and we are finaly told that she will need to be kept in overnight as she is still too dozy. No problem, at least she will be taken care of (its going to cost another £100 for an overnight stay though)

I then get another phone at around 1am telling me my dog has signs of internal bleeding which will require an emergency scan and operation, this will cost over £500 though. Thankfully I got another call at 4am telling me everything went well with the operation, they were able to identify where the blood was coming from and stop it. I also got a call around 8am this morning to let me know that she has now been outside and is much more sprightly and was bouncing about with her tail wagging, only thing is she hasnt eaten yet which isnt so good but they think it could be down to the amount of pain killers she has been taking.

I need to phone them again at 2pm and hopefully she will be able to come home at around 4pm.

Ontop of all this I have been dealing with some of the most difficult stuff yet in work.

Why is it that it all piles on at this time of year? its meant to be a time to kick back and relax!

Lovely dog Mighty, hope she recovers quickly and you have a great Christmas together.
Listen

kav said:
Lovely dog Mighty, hope she recovers quickly and you have a great Christmas together.
Click to expand...

Cheers Kav, I hope she gets back soon. Hate thinking of her being in pain and not being able to take care of her

Not quite sure what I could do if she was home though either....just hate this feeling of helplessness if that makes sense?

Sometimes you wish you could have the operation instead of your pet. We've got pet insurance and overall we're still "in pocket" after a number of previous illnesses and operations. That said, I'd rather still pay the money and not make use of it!

It s tough when you're scraping around to make sure your Chrissy budget is kept. I was off work last year and couldn't really afford anything.

Hope the New Year is better for you and your "friend"!.

My two wish her better!! Horrible when they are ill. 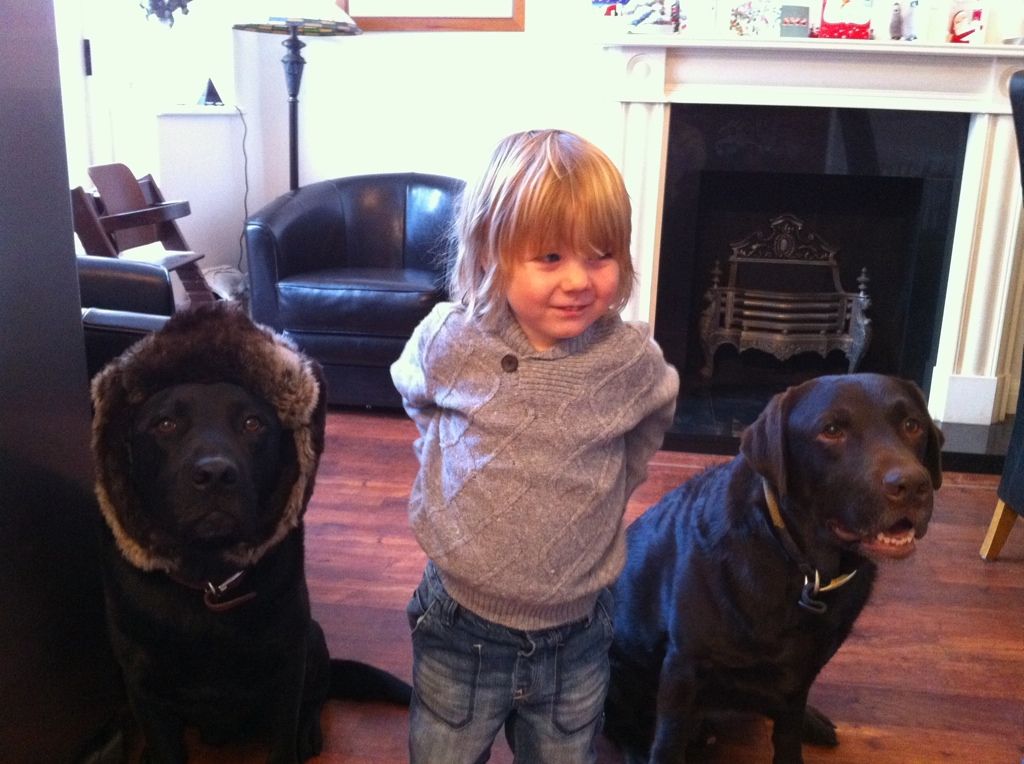 That is so cute with the hat aww

Not that it helps, but reading story like yours mightyG re-inforce how glad I am that we have pet insurance.

As you've found out vet bills can be BIG.

Hope your doggy gets better.

Hope she gets home soon and you all have a great Christmas. I hate it when our dogs are ill as you cant tell them its going to be okay and explain that what's going on.

They wish your dog a happy Christmas as well. 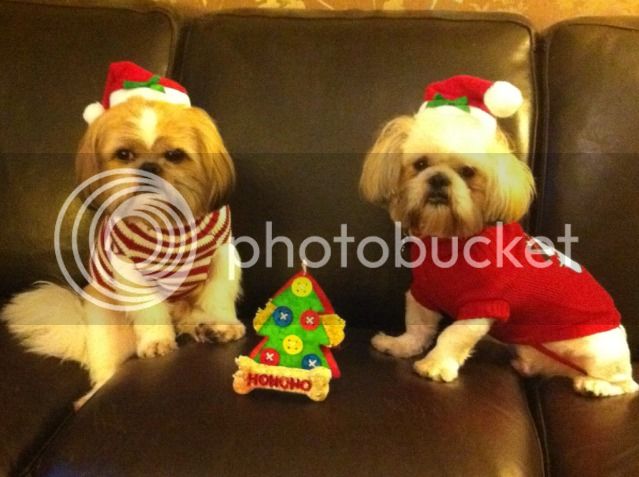 I wish you, your girlfriend, and your dog a speedy recovery, and a happier Christmas.

You're right, in that at this time of year, trouble always seems to rear its ugly head, when people can least afford it, and when it's likely to affect them the most, in terms of their mental health and well-being.

Unfortunately, as much as I wish I could magic all of your pain and troubles away, I'm afraid you will simply have to see how things pan out. I don't mean that to sound rude or insensitive, because it's not meant that way, but life does seem to enjoy throwing nasty curve-balls to some people.

Sometimes you have to wonder why we all bother, when so much crap gets dealt our way... It's almost as if someone is simply playing with us, to see how much we can all cope with, before we go crazy!

I was going to ask if the OP had insurance, as if so surely they would have covered it?
An amateur built The Ark. Professionals built the Titanic.

ldoodle said:
I was going to ask if the OP had insurance, as if so surely they would have covered it?
Click to expand...

We've just had to make a claim through our pet insurance and even if your insured a lot of the time you still have to pay out the money initially and then claim it back. At a time when money is tight that's not an ideal situation to be in as it can take a month or so for the money to be paid to you.
TV = Pioneer Kuro, Amp = Denon 4300, Speakers = KEF, Sub = BK XXLS400 and a PS5

wbabbington said:
We've just had to make a claim through our pet insurance and even if your insured a lot of the time you still have to pay out the money initially and then claim it back. At a time when money is tight that's not an ideal situation to be in as it can take a month or so for the money to be paid to you.
Click to expand...

Ah OK. With ours we can give the vet our policy number and they deal straight with the insurers
An amateur built The Ark. Professionals built the Titanic.

ldoodle said:
Ah OK. With ours we can give the vet our policy number and they deal straight with the insurers
Click to expand...

That's how ours works as well, makes things much easier and less stressful. It was just unfortunate that it happened in the middle of the night and we had to take him to the emergency vet.
TV = Pioneer Kuro, Amp = Denon 4300, Speakers = KEF, Sub = BK XXLS400 and a PS5

Sadly we dont have insurance, I cant stress just how much I am kicking myself at the moment......

Take it out now. You will be covered for anything which is not related to her current problem.

Molly says get well soon (and take out some insurance)!

First of all, a big thanks to everyone for wishing Wendy dog well!


Now a quick update on the woofers:

we phoned up at 2pm and were told shes much better, has been outside to go to the toilet and is wagging her tails and bouncing about in her cage when people walk past. They were astounded that she was so chipper after going through two big operations.

The only problem was she hadn't eaten since Monday evening, they asked us to pick her up at 3pm yesterday to take her home and see if we can get her to eat. They thought it might just be because she is stressed and in a strange environment that she wasn't eating.

We picked her up and she was ecstatic to see us, she was bouncing about and her tail whipping about like mad. We stuck her in the back seat (seats split folded down) and my misses sat with her to hold her while we drove home.

Once inside I opened up a tin of the dog food the vets gave us to give her, we stuck it in the bowl and she turned her nose up at it. I started picking little bits out and hand feeding her, thankfuly she was eating and after a few hand fed bites she was eating unaided.

Only thing thats still cutting me up inside is she is still in allot of pain and I think she is struggling to get comfy, she will lie still for around 10min then start whimpering, my girlfriend got around 1-2hrs sleep lastnight as Wendy was crying all night ohh, and she hates and I mean HATES the cone of shame

She is due back at the vets today for a check up though so we are going to ask about some pain killers for her, hopefully she will be able to get a good sleep tonight!
D

Our springer just ran up a £1.3k bill over two operations, pretty glad my better half pushed us to take out the policy.

Glad to hear she is on the mend. After reading your story and seeing how grumpy my dog looked in the jingly Christmas collar my wife's sister bought her, I decided to change my avatar for the month.
Listen

My experience with the whimpering is not the pain but the after effects from the anaesthetic. They just don't know what is going on. I am sure it will be gone within the next day or so.

Hope she starts to feel better quickly and make a full recovery. Some of the best medicine she'll get will be the affection and company of her family. And it sounds like you have that well covered.
G

Aw poor Wendy, I am a big dog fan, don't have one just now due to the two of use working office hours.

I love the pic of the Xmas Dog on here, well done chaps!

Aw is she Lamp Shaded Up? I feel bad watching dogs have to try and get on with those, this will partly be a struggle to get comfortable with that around your neck but it's necessary so don't give in ans take it off.
Lots of silver and black stuff - 2 x Harmony One's

Had to have my cat put down on Monday. Still very difficult for me to even think about it, let alone talk about it.
I very much enjoy Christmas but this year it just won't be the same without my little friend and companion.
You must log in or register to reply here.

Any accountants on here? Hoping for a little advise please

Has SKY salesperson duped my mother?