I've made a few changes and added a couple of new pics at the end of the thread.

Here are a few pics of my den which combines my hobbies of home cinema and woodwork.

The room is in the attic and is about 27feet long and 17 feet wide. It is easy to black out because the Velux roof window has a blind fitted and once closed, the room is pitch black, even in full daylight.

The first picture shows the screen wall. The area around and behind the screen it is painted in matt brown sugar. The screen is 54 inches high and 96 inches wide, made from a 3 inch wide timber frame wrapped in black velvet with blackout material used for the screen itself. It cost about £25 to make. 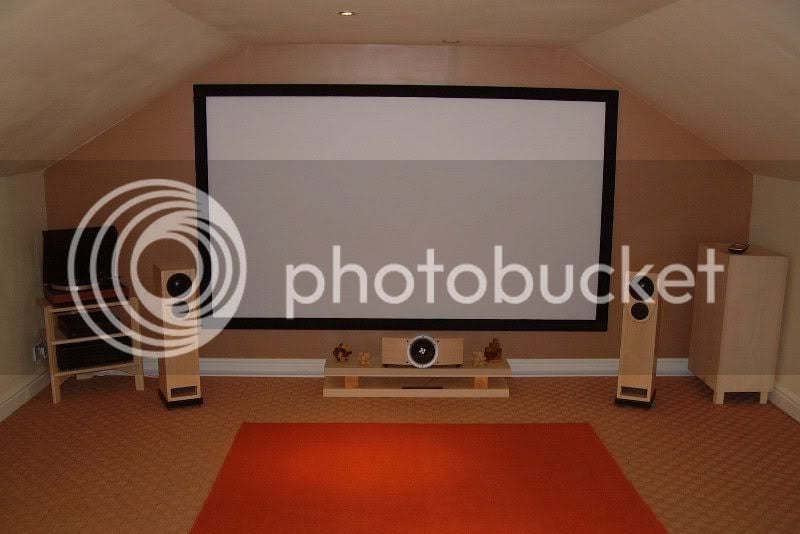 To the left is my hifi system. The rack is a self build made from ash. The equipment is all around 20-25 years old and was bought during my student days. For anyone interested in vintage(ish) equipment, the turntable is a Heybook TT2 MkII with a Logic Datum II arm and Audio Technica cartridge. The CD player is a Marantz CD273SE and the amp a slightly newer Yamaha pro-logic amp which is a stop-gap until I can get a good deal on an Audiolab 8000. 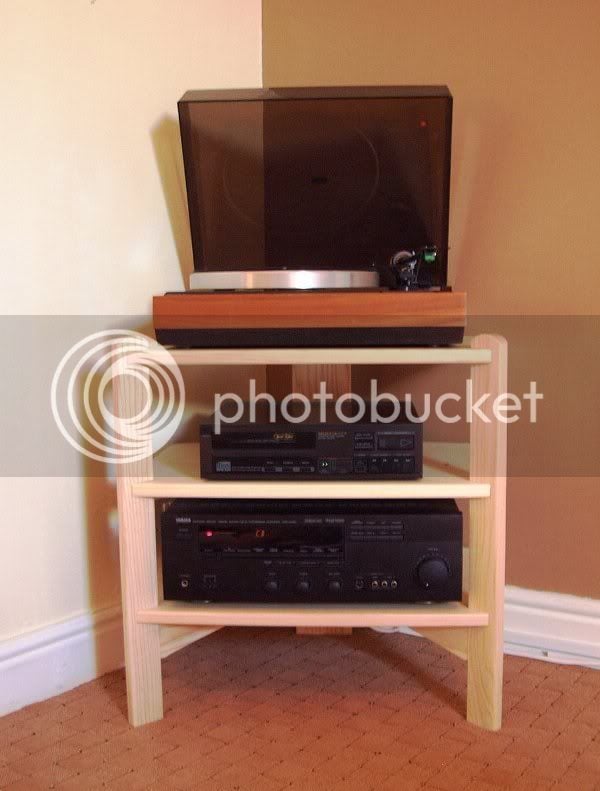 The front speakers are IPL acoustics M3TLs which I have had for a few years although I have recently rebuilt the cabinets in ash. 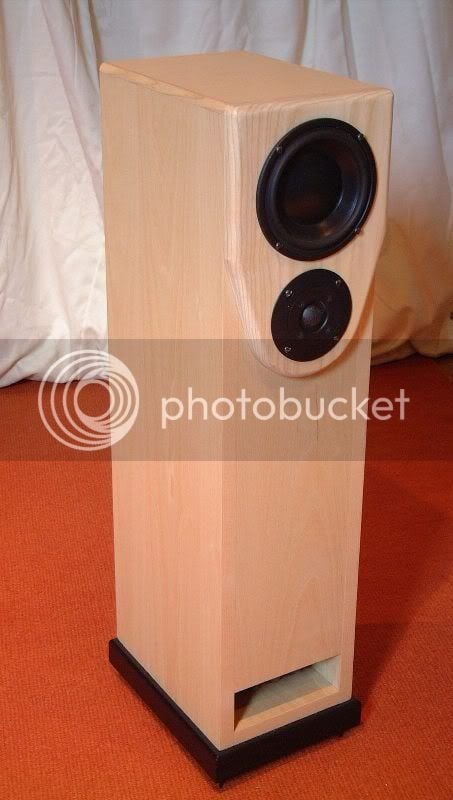 For music, these are the only speakers I use and for film they integrate well with the Kef Q9C centre.

To the right is the subwoofer. This uses the same drive unit as the BK monolith in cabinet of the same internal volume but a different shape. The amp driving it is a 150W plate amp from a Mordaunt Short subwoofer. This is an area of experimentation for me. So far I have tried a very large transmission line enclosure for the drive unit and this ported cabinet. Next is going to be round cabinet.

And thats it for the front view. I like clean, simple lines, dont like to have cables on view and prefer the AV equipment with all of its associated lights to be out of sight.

To the right is a cabinet built into the wall which extends back into the loft space. This was built to fit between the joists and it houses:

The camera has picked out some of the cables in the back but in reality they are pretty much invisible, even when the room is well lit. The shelves are fully adjustable. 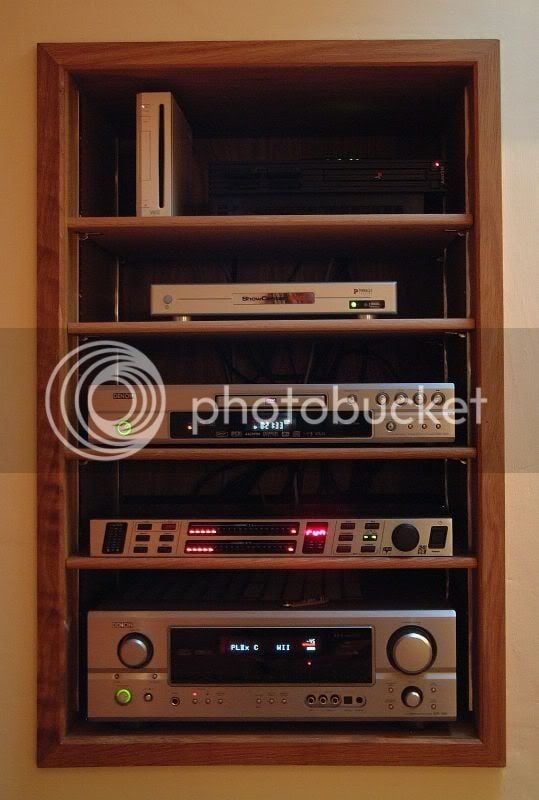 The Wii has a wireless network connection. The Showcentre and Playstation connect to the Ethernet switch which is in turn connected to the house network. As well as various PCs, this includes a server containing all of our media (music, photos and video).

All cables go from the back of the equipment, in the roof space or under the floor and as far as possible, no cables are visible.

Opposite the AV cabinet is the DVD cabinet, this is built in the same style being made of oak and fits between the joists in the same way. Its full now so another one is currently being constructed in the workshop and I will cut a hole and fit it when its done. The same will apply to the AV cabinet; if I decide to get more gear I will build another cabinet and extend along the wall. Im toying with the idea of building lots of cabinets and filling them with books but that may take a while. 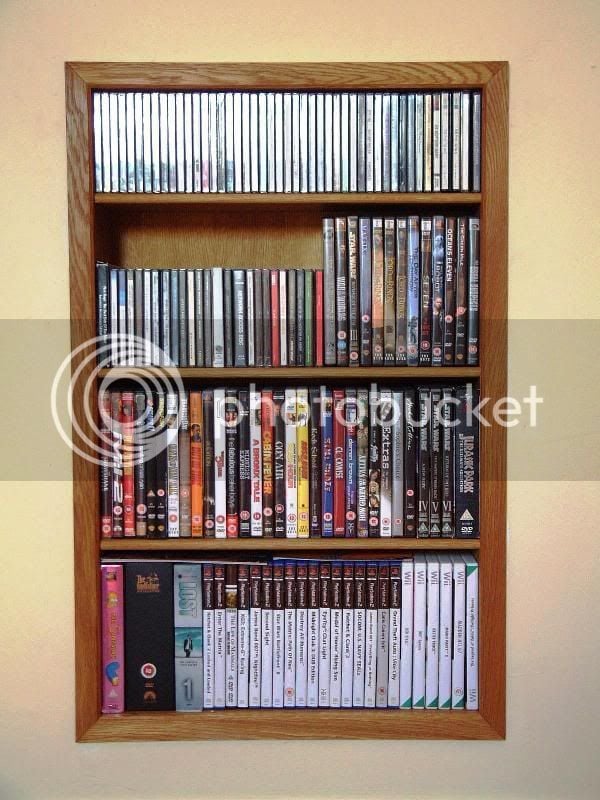 Also on the wall are the MS 903i dipole surround speakers. I really like these as they give a nice diffuse surround sound and integrate well with the front speakers. Im considering getting another pair of these to use alongside them. 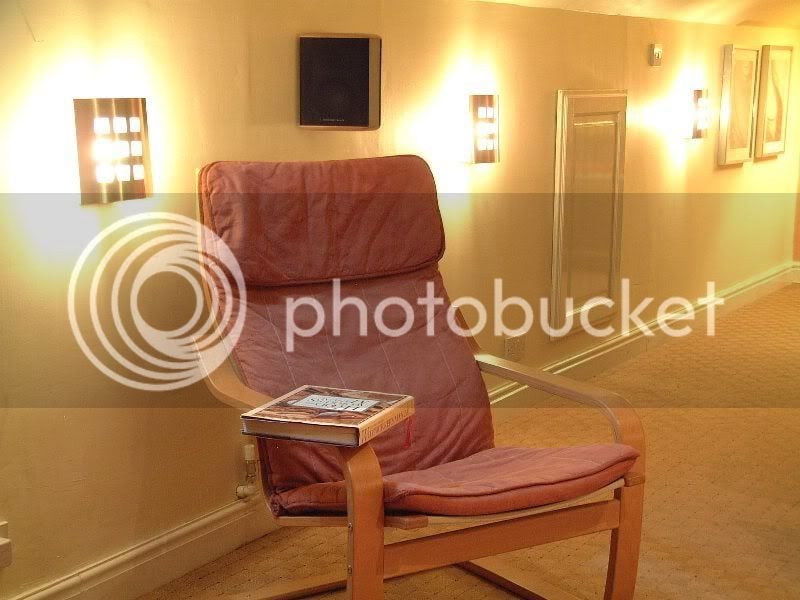 This picture also shows the wall lights which are remote controllable from the X-10 control box. The ceiling lights are also connected via X-10 and can therefore be operated by remote control. The ugly door is due to be replaced with something nicer looking or may house a beer fridge. 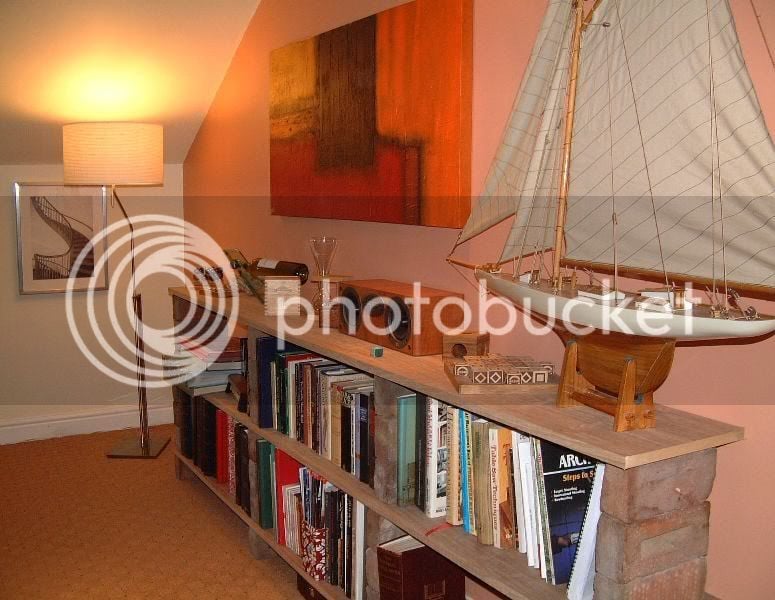 On the ceiling is the Hitachi PJ-TX200 projector on a mount I built for it. Its very simple and holds the projector close to the ceiling but provides full adjustment. Component, HDMI, S-video and power cables all run from this, though the ceiling back to the equipment cabinet. It is positioned so that the centre of the lens is in the centre of the ceiling and no horizontal lens shift is required. The projector is designed to naturally project upwards (or in this case downwards as its upside down) and almost no vertical lens shift is required in the position it is in. It is about 14 feet from the screen. 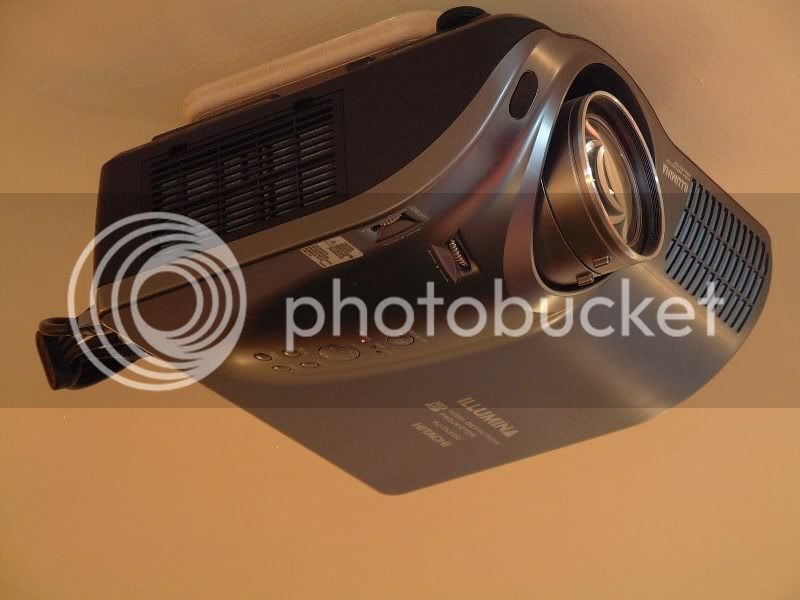 This view shows the room looking backwards from the screen. The snooker table was left by the previous owner of the house and it is ¾ size (9ft x 4ft 6inch) with a slate bed. 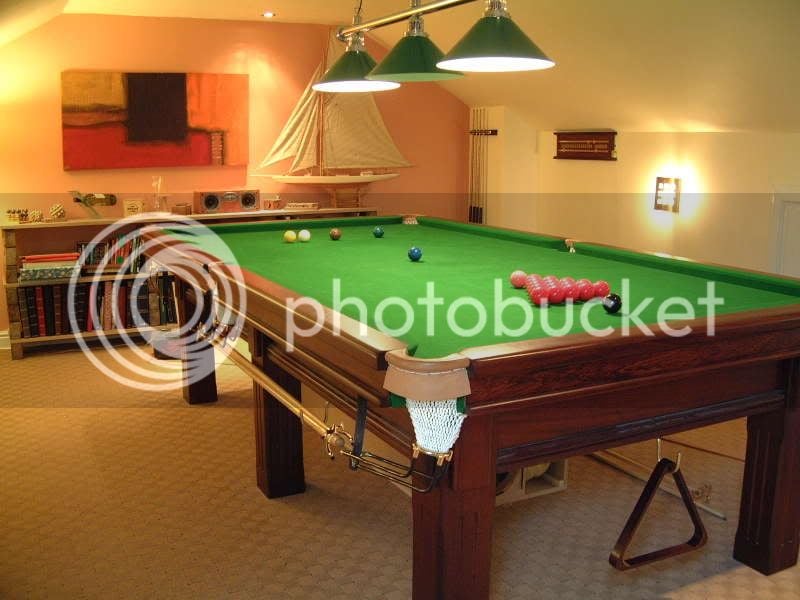 The Ikea seats are very comfortable and are also easy to move around when needed. The room is used for all kinds of things and the seats are moved as required. 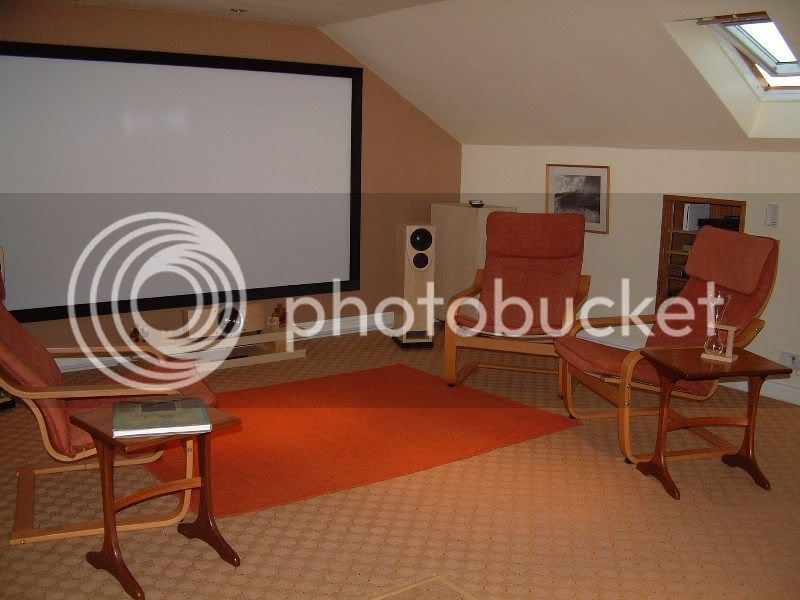 The picture above shows where they normally end up when sitting around or playing snooker. The picture below shows them positioned for watching a film. When setting up the amp and the BFD, the mic is placed on a tripod, exactly where centre seat listeners head would be, so this is the systems sweet spot (i.e. my chair!) 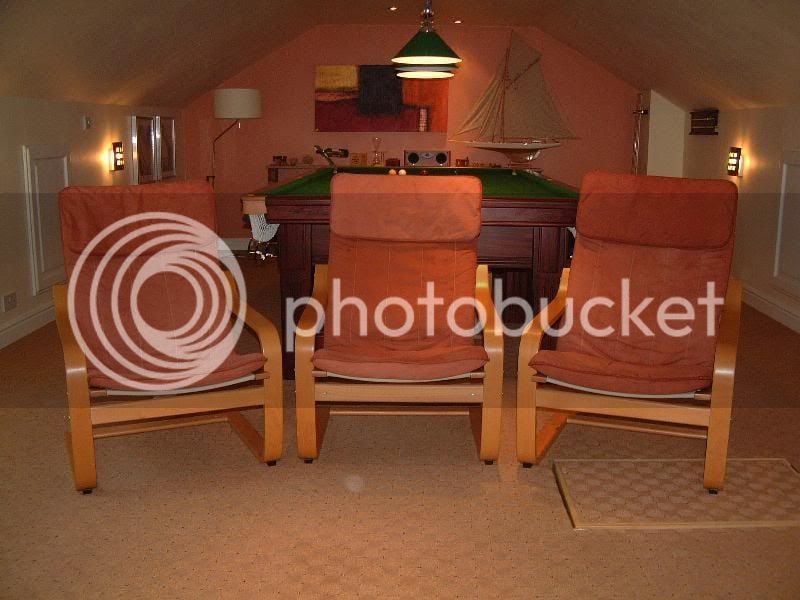 Funny but being a US Wii console owner that's the first time I realised PAL Wii games have plain lettering on the side as opposed to the NTSC coloured and individually styled spines. As with DS aswell games now I think about it.
​

Excellent use of space. I had a slate bed snooker table at my last place. Dont know how the last owner got it up there. Assume it was brought in through the roof with a crane. Those things are around 300kg! Took 6 very strong lads to get mine into my house. Looking at some of these threads makes me want to convert my loft.
My Set up:Sony HW50E PJ, Darbee Darblet, ISCO II Lens, Well endowed 4.4metre Scope screen, Onkyo 818 AV receiver, Bryston 9BSST Power Amp, MK S150 THX LCR, MA RS6 Front Wides, MA RSFX Rear Sides, MA Bronze rears, BK Monolith Sub x2,HTPC with 12TB server.
My Dedicated Home Theatre
T

Hi Sawdust. Lovely lookin room you've got there. Nice touch having the Behringer (I used to use loads of their outboard gear), and nice Heybrook - but where's all the vinyl ?!!
Oh and those Ikea chairs are not just very comfortable, but maybe too comfortable lol
My opinions are held entirely responsible by AVForums...they made me type them.
________ My kit pics ________​
N

Cracking set up; hopefully mine will look similar - gives me something to go off.

Apart from the snooker table, obviously, but I think my neighbours may be a tad perturbed if I annexed their attic.
My Setup in Progress
http://www.avforums.com/forums/members-home-cinema-gallery/1421966-my-cellar-conversion-cinema.html
B

Excellent use of space. I had a slate bed snooker table at my last place. Dont know how the last owner got it up there. Assume it was brought in through the roof with a crane. Those things are around 300kg! Took 6 very strong lads to get mine into my house. Looking at some of these threads makes me want to convert my loft.
Click to expand...

Thanks for the feedback,

As far as I know, the snooker table came in bits and was put together. The slates are about 2 feet wide. I think the previous owner realised it would wreck it taking it down so he left it.

THE_FORCE said:
Hi Sawdust. Lovely lookin room you've got there. Nice touch having the Behringer (I used to use loads of their outboard gear), and nice Heybrook - but where's all the vinyl ?!!
Oh and those Ikea chairs are not just very comfortable, but maybe too comfortable lol
Click to expand...

The Heybrook is about 20 years old. I used to have loads of vinyl but a burst pipe and flooded house ruined it. The turntable has been stuck in the attic for many years but I recently cleaned it all up and got it running again. As far as I can tell it is all working and running smoothly and quietly. I need to borrow a record to try it out and then might start collecting again.

CFS said:
Is that the R1 copy of Lost season 1? Looks a touch thinner than my copy?
Click to expand...

Where do your stairs go up?
My Setup in Progress
http://www.avforums.com/forums/members-home-cinema-gallery/1421966-my-cellar-conversion-cinema.html
S

N0RTHERN M0NKEY said:
Where do your stairs go up?
Click to expand...

It's an attic and access is through the loft hatch in the pic below:

It's a space saver type staircase rather than a loft ladder.

Looks funky; a great way to save on space as well.
My Setup in Progress
http://www.avforums.com/forums/members-home-cinema-gallery/1421966-my-cellar-conversion-cinema.html

Thanks for all the comments so far, much appreciated

Thanks for that and glad you liked it. A lot of work went into the speakers but I enjoy doing it.

I have a new job to do now as I blew up the sub amp last night! It was only a stop gap while I was building the prototype subs and wasn't really powerful enough so now I've pressed the old Yamaha AV amp into service until I can find something suitably powerful.

A very smart job, lovely work on the speaker cabinets, it's unusual to see something so well done on here.
Did you veneer the insides of the cabinets?
System: Linn, Audionote, Panasonic, Topfield, Revel, Various DACs; Cables: Atlas, AudioQuest & several home made; Furniture: Hold the Music;

Knightshade said:
A very smart job, lovely work on the speaker cabinets, it's unusual to see something so well done on here.
Did you veneer the insides of the cabinets?
Click to expand...

Thanks for the comments.

They are built from pre-veneered 19mm MDF sheets, veneered both sides. I just did the edges with iron on veneer, trimmed with a trimming bit in a router. The rounder front bits and the edges are solid ash. The plinths are MDF sprayed black. They are hollowed out and all the crossver components are in the base for ease of access.

Nov 27, 2022
Bradleysteenkamp
B
A
Best speaker locations, sofa against wall?