Hi All,
I need help. Please be patience as I am learning a lot and some things will sound novice.

I connected the Apple TV to the receiver and tried to play a UHD movie, and there is an error that the format is not compatible (ordered a HDMI 2.2 cable arriving tomorrow), but I assume this issue is related to receiver limitations and can't allow UHD content or maybe related to non-HDCP 2.2 compliance... maybe? Maybe is one of the same... idk

I don't want to spend $1500+ for a new receiver, so I am looking for advice about possible options that would allow me to maximize my setup.

I am willing to sell my receiver if I have to, but I rather not... Thank you for the help

THe ATV uses something called Dolby MAT to fascilitate the output of Atmos. What this basically means is that the ATV decodes the DD+ encoded element of the audio package and output this as multichannel PCM along with the Atmos metadata.

You can find how to configure the ATV to do this here:

Find out how to play Dolby Atmos or surround sound on your Apple TV with a sound bar or AV receiver.
support.apple.com

There's no reason why your AV receiver wouldn't be able to recognise this if connected to it directly via HDMI. You'd not be able to convey this via optical or ARC though. eARC yes, but not conventional ARC. Conventional ARC is limited to just 2 channels of PCM data and cannot convey multichannel PCM audio. THe same is true of S/PDIF optical.

The error has nothing to do with your cables and you don't need a 48Gbps capable cable. It serves no pupose what so ever top use such a cable with your AV receiver because it predates HDMI version 2.1 and is limited to the 18Gbps associated with HDMI version 2.0.
J

The receiver detects Dolby Atmos audio from the ATV, but when I try to play a Movie, the ATV detects that the TV can't support it.

Today, I swapped the cable from the ATV to the Receiver for a HDCP 2.2 cable, I know the receiver is not capable of 2.2, but I tried it just to make sure there was no limitation.

When I tried to play a movie "This video can't be played" it looks like your HDMI cable or connection doesn't support HDCP...

Then I used that cable from the receiver to the TV and the same error occurred. The TV is detecting 4K SDR 60 Hz.

I then connected the ATV to the TV directly, and I get 4K Dolby Vision at 60Hz resolution.

It looks like I will either get the "best" picture or the "best" audio, but not both. Thoughts?

I wonder if there is a device that would allow me to split the audio video so I can get the best of both worlds without having to replace the receiver.

There's no such thing as an HDCP 2.2 cable. Cables have nothing what so ever to do with HDCP.

The issue you are having has nothing to do with the audio format and is a case of the ATV not detecting that the AV receiver is HDCP 2.2 compliant.
Last edited: Apr 5, 2022

I'd suggest you try the following:

1. Disconnect HDMI from Apple TV and the AV receiver

2. Disconnect the Power from both devices

3. Reconnect Power and HDMI to all devices


You may also want to try including the connection from the AVR to the TV and also try disconnecting it as well as the power supply from the mains.

You may find this of interest: 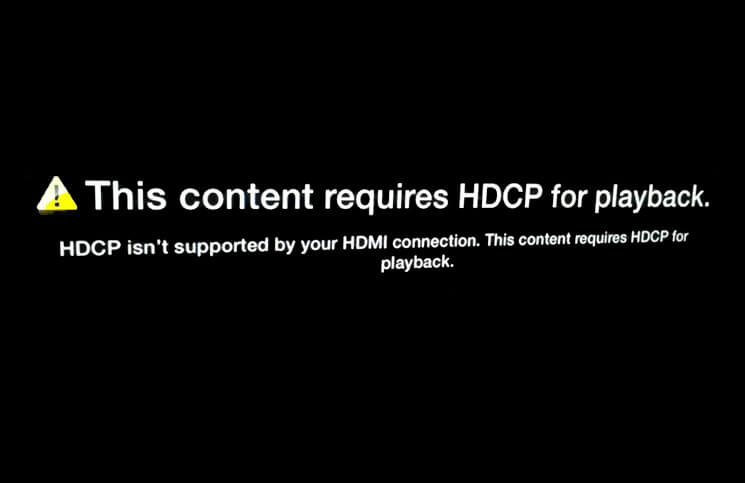 Are You Facing HDCP Error on Your Apple TV? Here Is a Fix


Other potential fixes include resetting the ATV, but try the above first.


It is the ATV at fault and it is a common issue many have experienced.
Last edited: Apr 5, 2022
J

@dante01
Thanks for the advice and time to help me out.

I tried all of the steps above, tried different cables, different TVs inputs and nothing worked; however, I found and tried the device below and now I can get Dolby Vision ATV (TV), and Dolby Atmos. I don't know how durable the splitter is, but it's a good chance to take instead of having to replace the AVR.

Search in Amazon for this $30 device:

Separate issue now: is that the Xbox One X sounds like a helicopter when Atmos is activated ... I haven't been able to resolve this.
You must log in or register to reply here.

B
Atmos issue with Tidal on Denon AVR-X4500H

Streaming and 7.1 audio - do I need a new receiver?