AVForums Sponsor
Well this was sprung on me a week ago. I've just received the official press release and it is below. Dealers in UK and EU should be getting pricing and info about them this morning once i've had my coffee. The only thing to add to the press release is that while the units currently will have all the features of the present range, plus the additional features mentioned in the press release, they will also be given a full 17x17x17 LUT capability, probably by end of May, early June once they 4K processing pipeline has been optimised. They have much faster and larger FPGA along with more memory compared to current 20xx units so do not expect 20xx units to get those features, though they may get other shared features but i am not at liberty to comment on those possible features at this time.


"""""""""""""""
FOR IMMEDIATE RELEASE The Lumagen® Radiance™ Video Processor Family Adds New Members
April 16th, 2014 — Lumagen®, Inc., a specialist in the design and manufacture of products for the home and corporate theater markets, today announced four new members of its Radiance™ video processor family. These are the Radiance 2123™, the Radiance 2124™, the Radiance 2143™ and the Radiance 2144™.
Jim Peterson, Lumagen’s president, stated, “our customers were asking for more HDMI inputs, and the ability to scale source material up to 4k60. All four of these new products increase the HDMI input count to eight, and two can scale SD and HD source material up to 4k60. This maximizes video performance by taking advantage of Lumagen’s proprietary NoRing™ scaling to scale film source to 4k24 and video to 4k60. Supporting all the features of the Radiance 20XX series, including Darbee DVP™ processing, the new Radiance 21XX series answers our customer’s challenge.”
The Radiance 2123 and 2124 support input and output rates of up to 1080p60. The 2143 and 2144 increase the output rate to up to 4k60 in 8-bit 4:2:0 format.
The Radiance 2123, and Radiance 2143, support eight HDMI inputs, two HDMI outputs, a wired-IR command input, an RS232 command input, plus an internal USB-to-serial adapter. They are housed in a 1U rack mountable case.
The Radiance 2124, and Radiance 2144, add two component inputs, two composite inputs with 3D comb filter, two analog stereo inputs, one optical audio input, and three COAX audio inputs, plus a COAX audio output.
With its extensive processing, setup, and calibration, feature-set the Radiance family is perfectly suited for refining and enhancing the images presented by front projectors, and top-level flat-panel displays. With the introduction of these new products, the Radiance family continues as the video backbone for the best home theaters and media rooms.
The Radiance 2123 and 2143 are available immediately, and the Radiance 2124 and Radiance 2144 will be available in May.
ISF Calibration since 2001
Lumagen Expert _ Ultimate Video Quality
Demo Epson LS11000 price drop + Radiance Pro 4444 used

This is great news Gordon, I thought only having 4 HDMI inputs was a bit of an oversight in the 20XX range. The addition of 17 x 17 x 17 LUT capabilities is a little mind blowing - that's 4,913 data points - I wonder how long that will take to run with Calman AutoCal?!

Also, is this a typo Gordon:

So the difference between the 2143 and 2144 will just be the addition of legacy audio and video inputs, as per the 2043 vs 2044, both will have all the same video processing features and capabilities?

The units that end in a 4 are the ones with the legacy audio and video inputs, yes. These also come in the 2U High XE case not the 1U high XS/20XX case as they can't fit it all in the small case I think.

These do not take in 4K so there is absolutely no requirement for HDCP2.2
As they support one of the HDMI2.0 options with their 4:2:0 4K 24/25/30/50/60Hz output they can be called HDMI2.0 output devices. There are not HDMI2.0 with HDCP2.2 chips for them to utilise in a product just now. Sometime after summer they should show the Radiance Pro hi-end super scaler which will have that capability..but that depends on silicon image actually supplying the hdmi2.0 chipset in the timeframe they have given...

Yes, 17x17x17 is pretty mental..and yes, it'll take a while to measure all that. It'll be worth it in the end though!
ISF Calibration since 2001
Lumagen Expert _ Ultimate Video Quality
Demo Epson LS11000 price drop + Radiance Pro 4444 used

Thanks Gordon, sorry I hadn't realised that they couldn't take a 4k input. I guess I'll be waiting for the Radiance Pro then when they arrive . . . 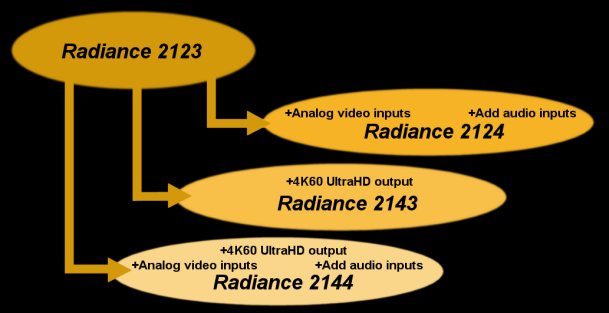 See the utilities page now for a new configuration updater that works with the 21XX series.

Had my first Lumagen (a 2123) supplied, installed and calibrated on Sunday by Gordon, and WOW, what a difference it has made! The contrast and colour are on another level compared to previously, and I had thought they were pretty good to start with! (I'd had the projector calibrated previously using ChromaPure).

Very nice, Gordon is a very experienced calibrator with LightSpace

I have designed a Cube Resolution Comparison Guide here to visualise the difference of calibrated color points precision over various cube resolution sizes between 5/9/17-Point Cube etc...
Click to expand...

There a lot of more control points in 17-Point vs. the 9-Point Cube, your skintones will be improved also, generally your image will have increased depth, more lifelike images, as you see at the image below the average Caucasian skin tone resides well away from any grey scale, or primary colour point.

LightSpace CMS Software were used for 17-Point Cube profilings to post-production/film industry since 2009, it's installed to major facilities around the world, here at consumer HT world we didn't knew anything for 3D-LUT until 2012 where Lumagen added the 5-Point Cube (free thou firmware update) capability to Lumagen Mini-3D.

Bugfix for some sources not showing video when switching to them.

Small fix to allow the rs232 command for the "Alt" key to work with delimiters on.

Another small fix to the config updating code.

Adds "Off" to the fan control settings for 2123, 2143 for use in well vented areas demanding quietest operation.

Couple of bugfixes for problem getting a picture on some sources when going to standby and turning back on.

Fixes up a few bugs in some of the test patterns in the previous release. (Update time ~3 minutes @57k)

Promoted Ambilight OLED807 TV – The best just got better, and in nearly every way