Been waiting for a while to post up my setup but have been waiting for the right time. Finally felt it was ready although still have future upgrades planned.

So just to give you an overview. Im 19 and a student. Most of my setup ive paid for myself through my part time job, apart from a few things which have been birthday presents. Quite pleased with how its turned out to be honest. 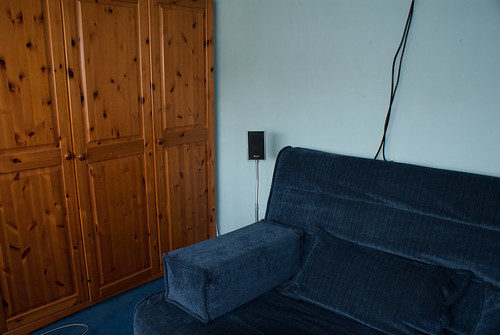 You can see the end of the sofa here as well as another rear speaker. The stands are just some £20 ones from argos with a glass base. The wires coming out from the sofa are for the projector. Not decided what to do with them yet but my dad won't let me drill anymore holes in the ceiling so they are staying there for now. 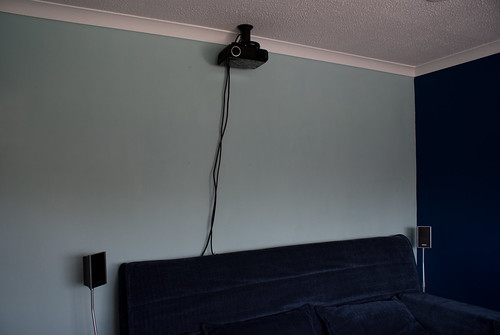 Quick shot of the projector. Its an Optoma HD700X. Managed to screw the mount into the ceiling and put a plate in the loft to spread the weight as there were no beams to screw it into at that point. 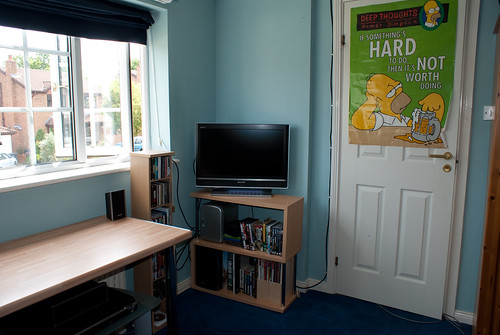 Originally had the tv on the desk but since i got the projector it wasnt possible to mount the screen infront of the TV. Got some shelves from Focus i think it was and the cd/dvd tower is from Argos. The TV is a Sony KDL-26T3000. 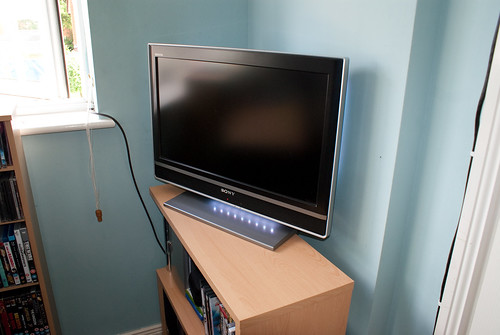 Closer image of the tv and you can see the ikea dioder lights. Although the ones on the side and top arent as clear. These were the multicolour ones. Cost £40ish i think but managed to get these as a present. 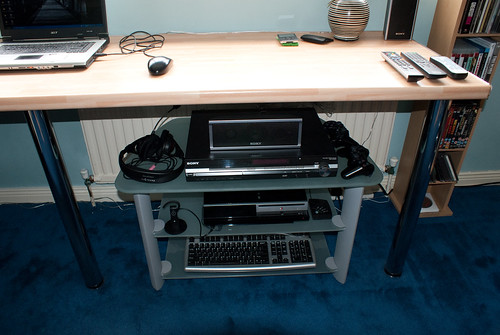 This av rack i got from Morrisons and i think it was around £35. Its not ideal but it fits nicely under the desk. The equipment here is a Sony Dav-DZ260, PS3 and wireless keyboard. Also next to the amp is a Fatality headset. 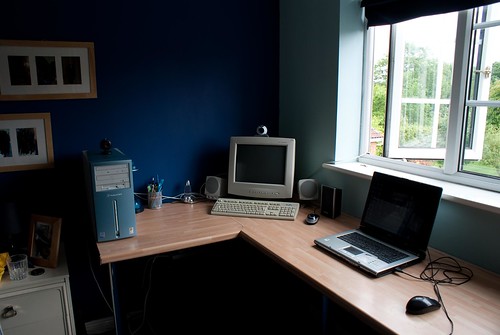 Thats the rest of the desk and equipment. The laptop is an Acer Aspire 3004WLMi. Nothing amazing but it suits me fine. The desktop is an old Packard Bell i bought off a friend for £20 a few years ago. I only have it for Wolfenstein Enemy Territory as the laptop's graphics card is rubbish. Got some Boston Acoustics 2.1 speakers aswell which are next to the CRT monitor. Pretty good considering they are an older set of speakers. 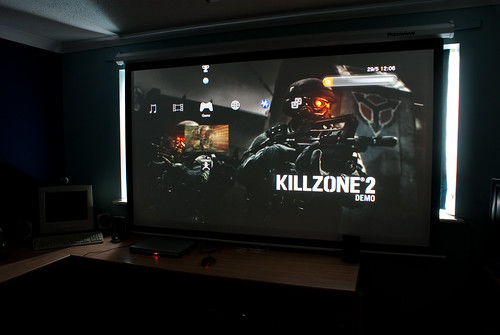 Here's a screen shot of the projector in action. The screen is an Optoma Panoview 92" pull down screen.

The full kit list is in my sig too below.

Future upgrades in mind are;


So thats my Setup. Let me know what you think.

Savage setup, well done. Great use of your kit. Think of all the student scum you can fit in your room!!

wht the distance from the projector to the screen pls?
L

Im unfortunately moving out of my house and back to a bedroom at my dads :-(

I was wondering how I was gonna fit a 50" screen in a bedroom but see its not an issue! I'm seriously gonna think about getting a projector now!

Ive just moved back from my uni flat. going to live at home next year to save money.
I had thought about buying a 50" tv so i could get 1080p but in the end i thought it would block out too much light as it would have to go on my desk blocking alot of my window. The projector seemed the best way to go and although its only 720p it still looks sooo good.

how long can you hold off upgrading to 1080p
L

could we see a picture with the screen down but with the lights on in your room, so its easier to get a sense of scale to how big the screen actually is?

Looking good, im 19 too but im on a gap year. That projector looks awesome, I'm so tempted to put one in my room now! lol
My Bedroom Setup

Too funky - i will get some more pics up over the weekend hopefully.

Tomelsemore - Yes the projector was a big investement for me but soooo worth it.

Like what you have done there mate, very good use of space
Want to join the No.1 energy supplier who is also one of the cheapest? And get £50 credit free?
Click the link below
Octopus Energy
L

luke90 said:
how does the trunking attatch to the wall?
Click to expand...