Maybe moving into a new house in which my uncle currently lives. All is well and will save us money in the long run. The only downside is the living area is not square and a little awkward for me to place my home theater to be in a good position. We also have a corner sofa which doesn't help things. The house will also be rented, so unfortunately, I won't be able to make any major changes, such as removing the chimney breast.

Below I have done a simple Sketchup of the rough layout.

The half of the room to the right of the chimney breast I think will mainly be used as my sons 'Play Area'. Just some room for him and his toys.

Now my uncle currently has his TV in the corner next to the window and door which would be the kitchen on the left, but he only has a 37" i believe and I have a 47". I'm also not keen on the idea of having the TV in the corner as I don't think i'll achieve the best soundstage I could but will obviously consider it if you think I could. Mounting on the chimney breast is also a no go. I think I would be too close to the TV and I think my 2 year old will hurt his neck looking up at it.

Also attached is an idea I had and was wondering what you guys thought of it. This is not completely to scale by the way. Again, just rough.

Equipment to be used:


I would EXTREMELY appreciate any feedback and/or ideas you may have on possible layouts I could do.

Thanks for looking everyone

no suggestions, but i like your idea of a false wall with the tv on, although id build it all the way to the ceiling, how wide/deep is the room?
xbox tag fragdude, currently playing PGR4, Halo3, Team Fortress 2 and COD4 PSN Fragdude, currently playing motorstorm, RFOM
Trading feedback will now only be left when people leave mine, too many cant be arsed to return feedback.

Thanks for replying bud

I did think of making it up to the ceiling but was worried that it will make the room look a lot smaller than it is. So i thought that if I make it about 3-4ft high, it will still let the room feel a little more open. Do you think I may benefit from having it to the ceiling?

It is longer than it is wider, but i'm afraid i'm not sure of the exact dimensions yet.

I can't see any other way of being able to achieve an equal sound stage other than this, hence why i'm asking for all your help. I am also looking at raising the TV a little as my son likes to stand in front of the TV at the most inopportune times

This would be the first time I venture into an attempt to create a home theatre of sorts. And from what I've read from all of you lovely folks, its better to get it right first than do something that you think you wont be completely happy with.

Again, thanks in advance for all ideas and suggestions.
Steam - Robtroll / Origin - -82ND-Robtroll

Hey Robtroll. I had similar issues as you when we moved to our new place last year. We had a corner couch in the old place and in the end, it was easier to buy a new couch than deal with everything that using the old one in the new place was going to bring.

With patio doors at one end and a window at the other, it's not idea for viewing, really 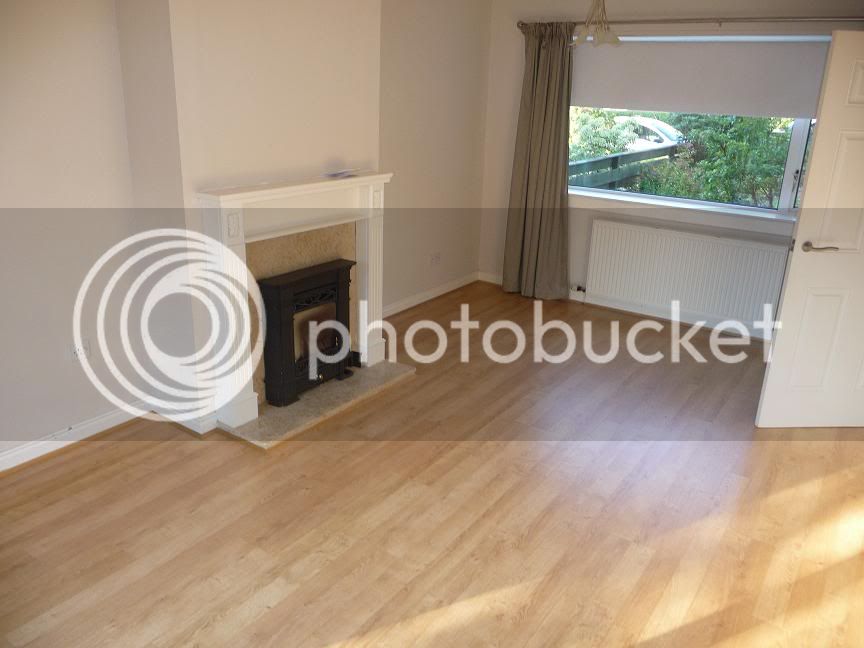 We ended up with this having used the fireplace and chimney for the AV stuff. It's a 46" screen on the wall and is a perfect distance for viewing. Looks kinda similar to your shape and sizes. I know you said you can't remove the chimney breast but with the way I did it, you wouldn't have to. It can be utilised. It's possibly worth considering and maybe knowing someone else has done it would allay your fears about being too close to things. We did mount ours deliberately slightly higher for one reason or another but you could drop the height on yours by a fair bit.


It might not suit your plans entirely but could give you an idea of how to use the space. Our door is where the person in your sketch up picture is... 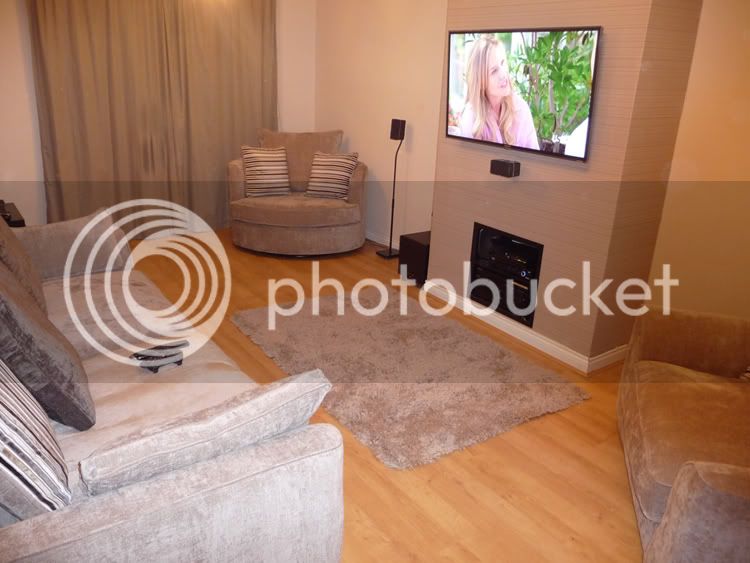 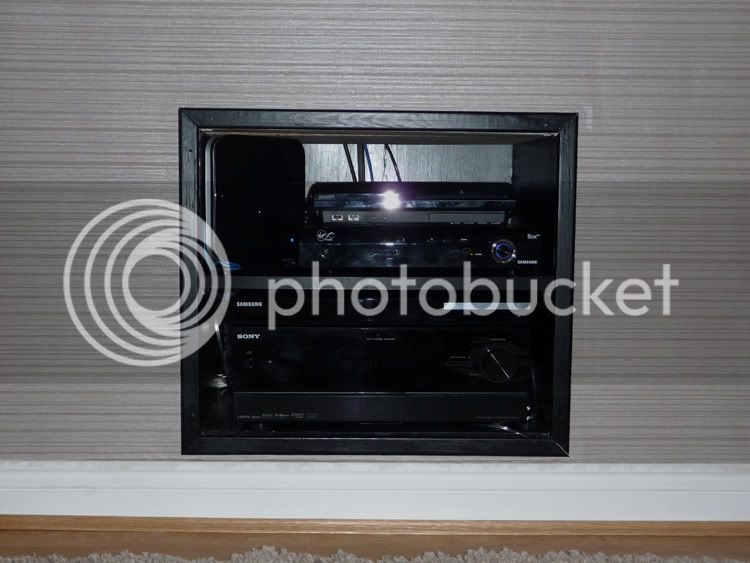 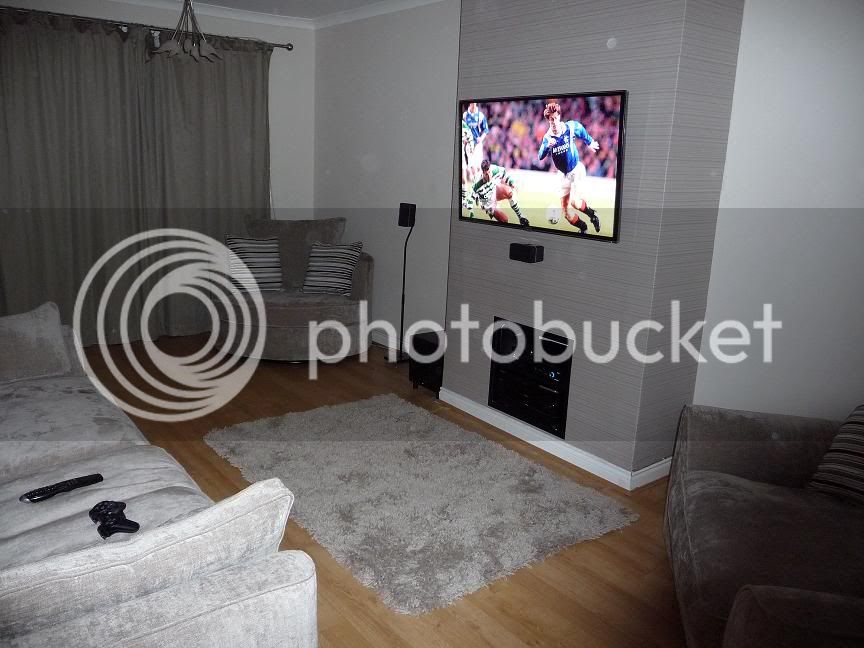 Thanks for taking the time to put that post together Laudrup.

Looking at your pics, I think our living space is a little narrower. I'm also not sure if he'll let me put holes in the chimney breast to mount the TV. I also can't remember if the chimney breast was closed etc. But it is definitely worth considering

I think i'm just going to have to wait until we're there (or get some measurements) to decide what is best.

Thanks guys, it is much appreciated to get some input.
Steam - Robtroll / Origin - -82ND-Robtroll

B
False Chimney - another wires question

Apr 22, 2022
Deleted member 901590
D
E
What cables/ connectors should I install when mounting tv on a brick chimney breast?