Filming has just started on Ben Affleck's new project as director. It's an adaptation of Dennis Lahene's 'Live By Night'. Sienna Miller, Chris Cooper, Zoe Sladana, and Affleck himself star. It's a prohibition-era set crime story. Given Affleck's track record of directing (which he should trade acting for imo), it should be one to watch out for. 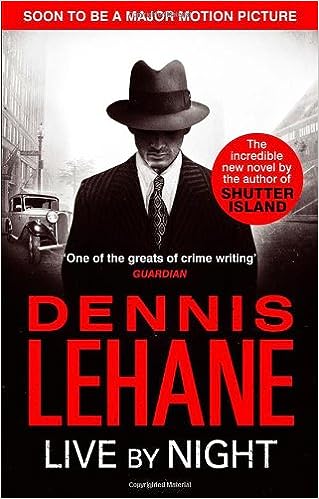 Like the look of that apart from that mediocre song that supports the trailer.
Favourite films seen from every year (1920-2017)
2022 ranked Another highly anticipated release, another film with poop reviews -
Live By Night

Hope the film is as good as that poster!
My DVD/BD/4K collection - Blu-ray.com - Blu-ray Movie collection

Saw a preview screening of this last night.

There is a good ambitious epic movie in here somewhere. I did like much of it but it ultimately fails to capture any emotional investment that it tries very hard to win from me due to several problems.

But on a positive note first, I absolutely loved Ben Affleck's mellow yet very cool sardonic persona of his character. He has striking presence especially with that Batman bulk he's being sporting of late.

The prohibition era cinematography felt nicely authentic and chaotic, though perhaps a little too "clean". A little more murkiness would have better suit, something akin to Untouchables.

The tone of the film strives for a Road to Perdition tone and style but fails to match anywhere that film's class or finesse. Cant knock the film for not matching it though, that's unfair.

Despite the intensity of the journey and the violent events that occur, there is a surprisingly strange lack of tension especially considering its Affleck at the helm. The film takes a long while to settle into a rhythm after a very choppy first half hour but when it does, it hits a steady beat. But its an overly talky movie with only very very few moments of smart dialogue that is otherwise incredibly dull. There is also a severe lack of compelling characters. All the support players turn up and read a few lines as if in rehearsal. There is no real passion in anyone except for maybe Elle Fanning who had a small role. So whatever melodramatic or tragic moments occur, they had little emotional impact on me.

If the dialogue could be more engaging with a few sparks, a tightening of the tension, a less choppy first half and a little more energy from the support players, then this would have been so much better as I really like the flow of the narrative (after the shaky first half hour).

As it stands. I'm glad to have seen it. Affleck's sardonic one tone character ironically saves the film from complete boredom. And I did enjoy the story despite its straightforwardness and I love the conclusion. Although, the focus of the story took a strange turn which didnt amount to much.

Overall, I felt its a film that is admirably sincere but sadly devoid of any real passion. Pity as I would have really want this to succeed for its ambition and I do want to see more of this type of film. Still go see it though if this is your sort of film and if you appreciate Afleck who just about makes it worthwhile.


What are your favourite prohibition era gangster films?

I do love films set in this era and place. I cant actually think of many so would be great if you guys can recommend some of your favourites

Mine are in order of my favourites:

1. Road to Perdition
2. Untouchables
3. Godfather Part II (justifiably one of the greatest movies full stop but I just personally love the above two more in the context of a prohibition gangster movie)
4. Millers Crossing
5 Lawless (this was an ok movie, probably a little better than Live by Night but I cant actually think of any more prohibition gangster films which is why I include it!)
Last edited: Jan 6, 2017
PSN: THEYCALLMETEJ(hit me for table tennis, pool etc in VR!) OCULUS/META: YouCanCallMeTJ
Telescopes: Celestron Nexstar 8SE, Equinox 80 (My Astrophotography)
Consoles: PS5(Disc), PSVR, Oculus/Meta Quest 2, Xperia XZ Premium, Virgin 200mb fibre
A/V: Panasonic TX-LXXDT65B 55" 3DTV, Yamaha RX-V767 A/V, 7.1 speakers,

Fantastic analysis @TheyCallMeTJ . You've raised some interesting issues, particularly with the characterisation (or lack of) but I'm glad you managed to find some joy with the film.

I have seen Affleck deliver both sterling and mediocre performances but I wonder whether his strengths may lie in directing. Live by Night has received lukewarm reviews; I appear to be firmly in the minority but I enjoyed this more than the critics.

Live by Night is old-fashioned and classically derivative, a nod to the heavyweight prohibition era gangster sagas. Affleck has delivered a richly decorated and well staged production with remarkable attention to 30's period detail.

That said, the film's objective does come across indiscernible, largely due to the lead character's desire to lead a somewhat ethical lifestyle as an outlaw. Not enough time is devoted to the development of supporting characters, resulting in their eventual exits feeling hollow. The premise spans several years yet the events appear disjointed.

Truthfully however, I am willing to forgive the majority of its faults, but I can understand that others may not be as lenient. Ultimately, I do enjoy a gangster yarn and Live by Night hit the mark for me.

TheyCallMeTJ said:
What are your favourite prohibition era gangster films?

I do love films set in this era and place. I cant actually think of many so would be great if you guys can recommend some of your favourites

Mine are in order of my favourites:

1. Road to Perdition
2. Untouchables
3. Godfather Part II (justifiably one of the greatest movies full stop but I just personally love the above two more in the context of a prohibition gangster movie)
4. Millers Crossing
5 Lawless (this was an ok movie, probably a little better than Live by Night but I cant actually think of any more prohibition gangster films which is why I include it!)
Click to expand...

Once Upon A Time In America would be numero uno
others not mentioned that i like
Bugsy Malone
Dillinger
Bonnie and Clyde
Public Enemies the Depp one
and helluva lot of the 30’s-40’s stuff.
Favourite films seen from every year (1920-2017)
2022 ranked

Once Upon A Time In America would be numero uno
others not mentioned that i like
Bugsy Malone
Dillinger
Bonnie and Clyde
Public Enemies the Depp one
and helluva lot of the 30’s-40’s stuff.
Click to expand...

Ha, I feel stupid not mentioning Once Upon a Time in America and that is I think the definitive prohibition gangster movie as you say. Its not a film that I felt I ever wanted to revisit again though as it leaves a somewhat bitter taste with me, particularly a robbery scene, as much as I loved its epic and operatic flow. Its a remarkable film and justifiably one of the greatest but I guess I forgot it because I saw it only the once. Perhaps I should revisit it and maybe understand it more.

Bugsy Malone - awesome. Now that I seen aplenty. I suppose if we are including musical comedies, I have to add Some Like it Hot...in fact that actually will go almost top of my list as I seen that film more times than I can count and never get bored of it.

Talking of Bugsy Malone and Bonnie and Clyde for that matter, reminds me of Warrent Beaty's Bugsy. I remembered enjoying that film a great deal.

Have not seen Dillinger or Public Enemies, so I'll check them out, thanks.

Looking forward to seeing this. One of my fav movies is Miller's Crossing and loved Boardwalk Empire for the most part so right up my blood soaked alley.
M

Solid 7.5/10 for me Affleck is maturing as an actor an more so a director, loved the era setting it will get a few Oscar nominations I think
Domestic Treble winners, back 2 back league and league cup winners 2019.
"You'll never win playing that way in the Premier league" - Stan Collymore 2016

I thought this was a decent watch. Decent twists, nothing groundbreaking. The story did me enough to have me routing for Batman by the end of it.

7/10 I gave it. However, I know it was set back in the day, Batmans suits were very ill fitting I thought.

TheyCallMeTJ said:
I watch a lot of noir films but I dont think I really seen a good ol' Cagney/Boggart/Robinson prohibition gangster movie, if anyone can recommend their best ones?
Click to expand...

film is nothing special 7/10

Its not good especially for a gangster based film where i can’t honestly remember even one memorable stand out scene, i think the biggest blame lay in Affleck casting himself in the main role he just seemed to oversized for the role and looked pretty damn ridiculous in some of suits/hats he wore, my main bug though was he had no spark or trait that separated him from the average Joe, no menace and not one psychotic tick that a film like this desperately needs.5/10
Favourite films seen from every year (1920-2017)
2022 ranked

Ben Affleck’s woefully-received ‘Live By Night’ has scored itself at least one box office record.

Though it might not be the one he was after.

The period gangster flick has notched up the biggest third-week drop in cinemas screens ever recorded, plummeting from 2,822 screens in the US to only 163.

The stats come from Box Office Mojo (via Screen International), which records such data from all the way back to 1982.

The loss of 2,659 screens in a single week (that’s 94.1%) tops that of previous record-holder, Eddie Murphy’s ‘Meet Dave’ from 2008, the sci-fi comedy in which Murphy played a space craft which looks like Eddie Murphy, piloted by 100 tiny humanoid aliens, one of which was played by Eddie Murphy.

‘Live By Night’, which Affleck starred in, adapted the screenplay for, and also directed, has done terrible business so far.

Having cost $65 million (£52 million) to make, it’s only made back $20.8 million (£16.6 million), and that doesn’t count for the huge amount also spent on advertising and marketing.

It’s said that the movie could lose Warner Bros a cool $75 million (£60 million) in all.
Click to expand...

I didn't think it was too bad, really. It's not a top tier gangster film but I found it entertaining enough. I don't think it's anywhere near the stinker the figures suggest it is. Maybe that's just me, but I would have thought it at least deserved to make it's budget back.
You must log in or register to reply here.