Just watched my first HDR content. Exodus. Never thought there would be much difference between 4k and HDR. How wrong was I. Cant explain it really but it's as if everything came to life. So natural like real life. Any more good HDR demos about?
Epson TW9400 projector, monitor Audio Bronze 5.1.4, Denon 2300 amp, Panasonic ub820 4k player, ps5, LG oled C9, NVIDIA Shield tv and On the buses boxset.

Doctor Smith said:
Just watched my first HDR content. Exodus. Never thought there would be much difference between 4k and HDR. How wrong was I. Cant explain it really but it's as if everything came to life. So natural like real life. Any more good HDR demos about?
Click to expand...

Almost looks 3d doesn't it? It's amazing. the contrast in colours is breathtaking....

Try out the life of PI one too..

My blu ray player has died. Can anyone recommend a good replacement?

there is also a 8minute youtube movie called 'Into the cave of wonders'.. that's amazing too... Mind you, i'm spoilt as i've seen that cave for real....

I have read the majority of this thread a wanted to pass on my current experience with the HDMI 2.0a compatibility confusion on the EG960V.......

I purchased the 65EG960V in November last year from John Lewis and the LG rep told me it was fully compliant with HDR both streaming and from an HDMI source. having read this thread and investigated my TV set, my model is a ZA October 2015 build and i've updated to the latest firmware which is 40.00.70.

Last night i emailed the LG support team with my serial number to get clarification on whether my TV has an HDMI 2.0a port, if not would firmware upgrade come to enable it, and lastly if the firmware upgrade is not an option (which i doubt it would be) would they replace the hardware (Like the ZD model) and below is the reply i got today:

Hi there James
Thank you for your email.
I would be more than happy to assist you with this.

I can confirm that our EC, EF and EG series TV's are HDMI 2.0a compliant, and this will work with your model TV.

I hope you are happy with the service I have personally provided, if you are, please take the time to fill out a short survey at the bottom of this email. It is based solely on my efforts for you. I appreciate all feedback given!

Should you need any more assistance, you can reply to this email by clicking the additional questions link above the survey.

Thank you in advance.

However, based on the information above i still don't believe them, so to that extent i called John Lewis and asked their technical team the same question and they came back and said my TV is not HDMI 2.0a compatible and wouldn't be....with that feedback in mind, i spoke with customer services and being John Lewis they are refunding me and picking up the TV Wednesday....im now looking at the Flat Screen 65EF950V that comes with the HDMI 2.0a...it might seen extreme to some but spending a small fortune i want to have the functionality....

I will keep you updated on what i do and will be keeping a close eye on the progress of the thread.
Click to expand...

So fed up of LG Support. Every time I speak to them, I get a different answer. Time to speak to trading standards. I'll let you know how I get on.

JamesP1701 said:
My blu ray player has died. Can anyone recommend a good replacement?
Click to expand...

The new Samsung UHD Blu-ray player has just been released in the US, so it could be out here pretty soon. Give your TV some high bitrate goodness.
LG OLED55E6V, Pioneer VSX-LX52, Oppo UDP-203 MZ, Sky Q, Kef iQ speakers and an SVS 2039PC+ sub

james007bond said:
Almost looks 3d doesn't it? It's amazing. the contrast in colours is breathtaking....
Click to expand...

Also contacted UK consumer TV show Watchdog in the hope that they can help. Hopefully they find the story interesting enough to get us some justice!

HD Elvis said:
Hi. Do any of the 2015 LG OLED models meet the new UHD standard without obviously being badged as so?
Click to expand...

ZD badged models are HDR compatible via HDMI 2.0a.
The 2015 OLED models all support HDR streaming (well the EF and EG ones do)...

Imagine you have a device with a number of features, and months later, a new batch of the same model adds a very important feature that you can never enjoy. What job, right?That's just what happens to the owners of the LG EG960V-ZA, a version of a television offering compatibility with HDR formats only by USB and streaming , but they saw as others who bought the same television months later could enjoy HDR on HDMI.

The difference was in the motherboard. Newer models (called EG960V-ZD) included a new version with HDMI 2.0 and a new firmware that allowed HDR formats play through that port. As expected, users are not going to stay with folded arms, and began to gather the affected across different platforms, one forum ForoDVD . LG reference had Nordics had confirmed the problem in Norway, Sweden, Finland, Denmark and Iceland, and was committed to replace the plates of the users concerned, so there was hope.And they succeeded. 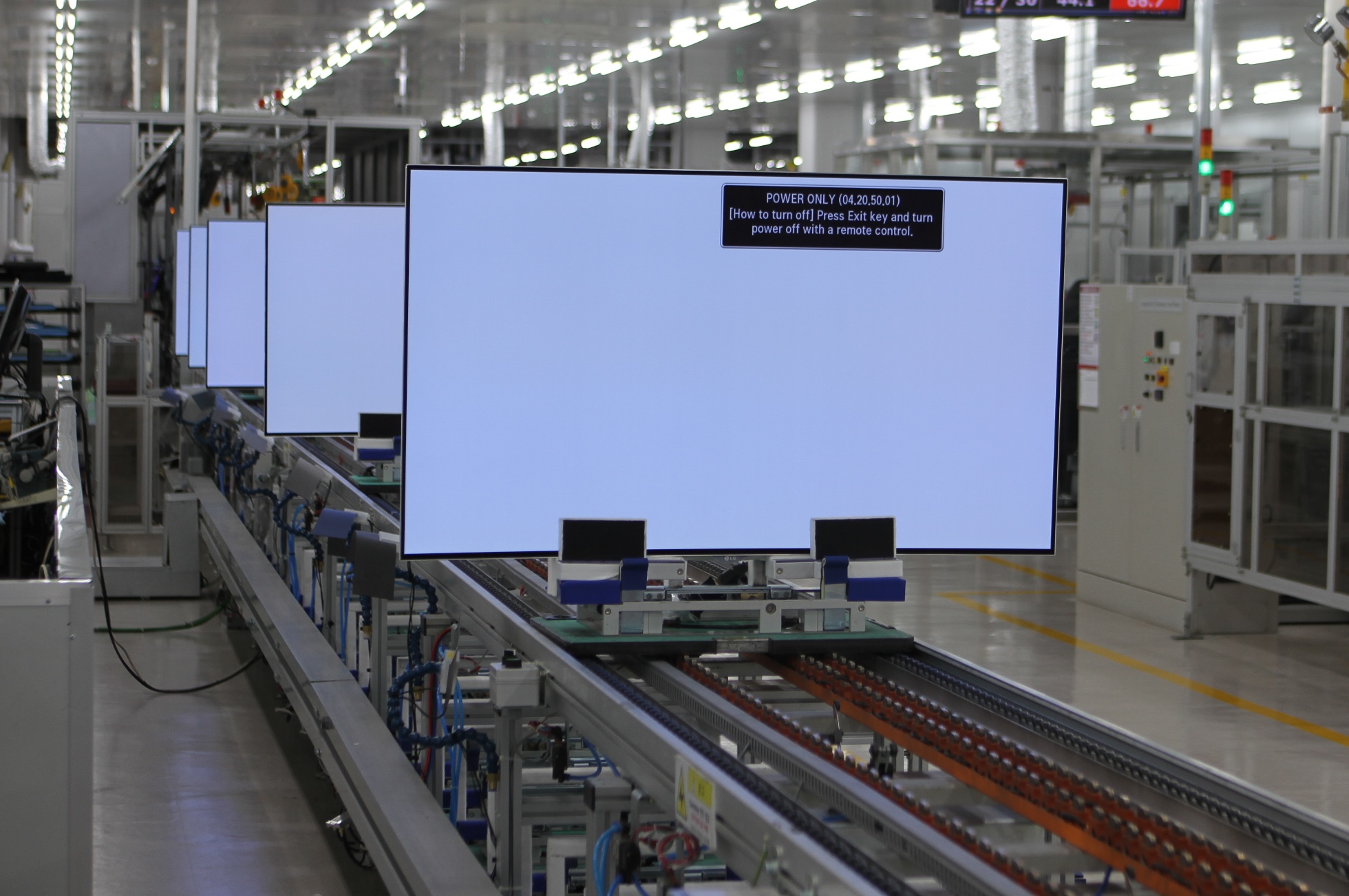 Today, LG Spain is accepting requests from users who demand the replacement of the "damn plate", from an EG960V-ZA to ZD EG960V-no cost, and although it has required the intervention and insistence of users, is excellent news to see how the manufacturer offers support they expected. So you know, if the sticker on the back of your TV matches the EG960V-ZA, it would be good idea would contact LG which to effect change. Not only have HDMI HDR (to enjoy a Blu-Ray with HDR, for example), but also to get the latest firmware available for display.

Well this is called setting a precedence, and I have now emailed LG UK support with the above. I have also asked that they escalate this to a management executive level. Let's see what they say now... If LG Nordics and Spain can do it, so can and should LG UK...

Let's get this momentum going..

Yup, you sure have CiASpook
S

Just about to order this TV so thought I'd ask LG the question on HDMI 2.0a before a made my purchase, this is what the reply a got today...

Hope this helps.
Slow and steady, bit at a time...

Has anybody had WiFi connectivity issues with their 960V? It seems that I have to manually connect to my router every morning now when I get up. Been like it since I upgraded to 4.00.70 or whatever the last firmware was.

Mine has been solid, has never dropped at all.. I'm running a Netgear Nighthawk but using the 2g and not 5g signal. My distance is about 30 feet away and a brickwall or two between them... Haven't heard of WIFI problems with this telly to be fair... I'll have a look at my settings on the TV later and post up a picky.... just in case you have something else turned off or on as the case may be..
K


I hope this email gets to you safely.


Thank you for your email. I am so sorry to hear you have felt the need to bring this up with trading standards and Watchdog.


I do sincerely apologise for this, but if this would be going ahead for ourselves, the upper management of LG UK will make the official announcement of this, and we will then, in turn, get passed this information, so that we may advise our customers accordingly

I can't get my message to submit on the LG website?

Ugh, 'I hope this e-mail gets to you safely', meaningless guff.

Every EG960 owner needs to be getting in touch with LG UK. Perhaps one of the AVF team could e-mail the head of LG UK's OLED department (forget his name) on behalf of owners? They've contacted him previously to clarify details on the 2016 sets, so perhaps he would be willing to help in the matter if he can see that quite a few owners are not wanting to be short-changed after giving LG their money and buying their products. Of course there's no "entitlement" that the sets get upgraded; that was never promised. But as people have said, the fact other territories are offering the upgrades means LG UK should be doing something.

Chaps, I have a couple of questions which are puzzling me..

1. How do you know if the 3d filter is properly aligned or not if the case may be? What gives it away? The only 3d discs I have are Dredd, and the two Avenger's movies. The 3d seems fine to me (no expert on this matter though)

thanks
You must log in or register to reply here.