Just what i wanted to hear.

Like always i'm the last to know, but i had to mention that i was happy to read on a Starwars website that Darth Vader will appear in Episode 3 Well i suppose he would have to. But when you think how it would turn out in the film you kind of wouldn't expect David Prose to be putting his black cape back on and getting back into shape ( after a new hip replacement ). Or James earl Jones getting his voice ready again.

But apparently it will only be about the last 7 minutes of the film, but as long as lucas says Episode 3 will be the darkest Starwars yet then 7 minutes is fine buy me.

Now there's a spoiler! Best not to mention acid pits and light sabre fights then....


There are no plans for 7,8 and 9 as films. Lucas gave up on the idea a long time ago and, to a certain extent, they have been novelised by the Foster series.
Are you tomando el pelo?

The trailer you refer to was a fan trailer made at the time when casting was still taking place. It isn't official. Was it from theforce.net by any chance?
Are you tomando el pelo?

will they be in episode 3

Have you seen the new official Episode III Trailer:

Are you tomando el pelo?

Originally posted by bh
Have you seen the new official Episode III Trailer:
Click to expand...

Thats one of the best Trailers I have ever seen.
0 to naughty in 6 seconds

Have you checked out 'The Han Solo Affair' at Lego Studios While you're there you might as well look at monty python too.
Assured
Advertiser
www.tbpav.co.uk Supply and installation of home cinema, multi room audio, home automation and networking. 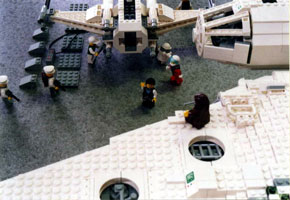 Are you tomando el pelo?
You must log in or register to reply here.