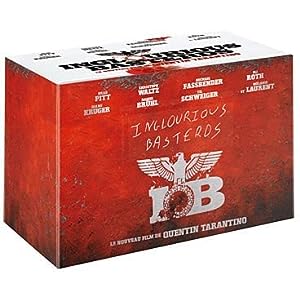 Anyone else got this set? What do you think of it? Personally one of the best in my collection. Love all the extra's, Steel Book is awesome and the film is good fun to boot.
B

Have to agree it´s a wonderful set either in German or French flavour. One of the best.
There is already a thread on this should you wish to contribute.

Do only some of the French sets not contain the Steelbook? Their stock dried up last night anyway.

It's very odd they've removed the Nazi insignia in France (it's illegal in Germany) as we have it in the UK and Australia. I think that's why I went for the Germany set as the box is in German and looks all the weirder.

My German Amazon Seller done it for £25.92 shipped. People charging more than that on eBay just for the Steelbook.

Loads of the French sets on eBay too from a guy in the USA.

I don't mind DVD or Blu-ray as long as it's a Steelbook and it's clearly listed as "DVD im Steelbook".

Looks a nice set.
You must log in or register to reply here.

P
Looking to buy an OLED telly but have some questions