nero0410 said:
That makes sense, I just looked through my films on iTunes and quite a majority of them are 4K HDR, I never even noticed any difference if I'm honest.

I do have a bit of money coming in as I'm selling a lot at the moment, so I guess the best thing to do is raise the budget to £2500, give or take a couple hundred and get the best (for me) that I can with that.

I'd certainly not like to go any smaller than 75-77" as the size is where I'd like the upgrade to be, I would like 85", but understand with that budget that I'd lose too much quality in the size trade off. I'd like to retain the quality that I have on my current Samsung UE65NU7470 65" that's moving into the bedroom as I do really like that tv.

What would 'cheap' be these days? As these tv's run into thousands or even tens of thousands of pounds from what I have seen at these sizes. I understand you get what you pay for, but I'm not someone who can afford to spend out £3-5K on a tv... sadly.

The only expectations I have really are that it works with my equipment, has a good picture and will last 5-6 years, hopefully without issue, preferably more, with no image retention or screen burn.

I have been keeping an eye on prices, and these ones 75+ in size have come down to consumer level of pricing pretty nicely. I'd imagine they'll eventually get to 100" or more.. though many wouldn't have the space big enough for that... the tech has moved pretty rapidly since years ago.

I did consider a 4K ultra short throw laser projector route, as that used to be the best and cheapest way to get a cinema type experience, something like this: 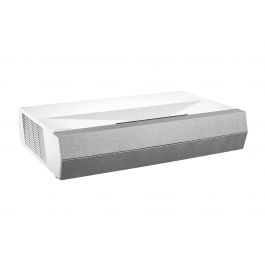 www.richersounds.com
but to have it on 6-8hrs per day/night, sometimes more and factoring in a screen with a start price of £2K didn't seem a logical step. Not simple, and again, I imagine I'd have to spend more in order to get a decent one. I did have a 1080p BenQ 3D projector for years, but sold that and my projector to get my current 65", as just a tv in the room is just simpler than both for me as I switch between tv shows, movies and games.
Click to expand...

LG CX 77 inch is £1999 from John Lewis at the moment. I think that is the best value price for a high end 77 inch OLED at the moment.
You must log in or register to reply here.