AVForums Sponsor
So I've not been posting much. Had all sorts of problems with my mum and trying to find a care home for her to live in now. You may remember though that a couple of month ago I posted that I'd bought a new camera. It arrived bust and with other problems but i kept it anyway. I got it in the hope it could be used in one of my photo projects. I wanted to try out some pre-film photography. It's called Wet Plate Collodion and is a process invented in the 1850'squite a while ago and quite different to my iphoneography. Now, whereas you can get in to iphoneography or indeed photography very cheaply and easily that is not the case with wet plate stuff. The camera's may be cheap but the chemicals are not and on top of that they are dangerous. So I decided it would probably be a good idea to get some training. To that end I booked myself on a two day weekend course with a chap called John Brewer up north

Day one consisted of some health and safety and a run through of the process, followed by John showing us how to do it from start to finish. The health and safety because the chemicals used in this process are, in no particular order, explosive, volatile, highly corrosive and poisonous/lethal. You have to be careful doing this and I didn't want to just get a book and dive in. I'm glad I didn't as I suspect I'd have made a real mess of the house and possibly myself. Here's a run through of what you do.

1: We cut some glass (2mm picture frame clear glass) to size for the camera we were going to use.
2: Then we burred off the edges so they weren't sharp.
3: Next is cleaning the glass with a cleaning concotion (not windowlene!). This stuff was a mild abrasive as it had chalk (calcium carbonate) and alcohol in it i think.
4: Rub around edge of the face we are going to use for image with a cotton bud covered in egg white. This stops the collodion from lifting off the glass plate i think
5: Next is pouring the collodion on to the plate. The collodion is the medium that is used to make the plate light sensitive. It has salts in it that will react with chemicals in next step and that will make the plate light sensitive
me pouring a plate 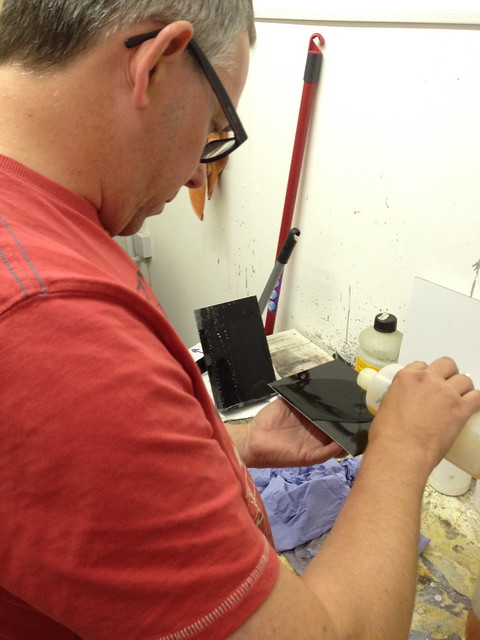 6: Next you stick the collodion covered plate in to a bath of silver nitrate for a few minutes. This is when the silver and salts react to make the light sensitive coating on the glass plate. It only stays light sensitive while the plate is wet though.hence the term wet plate.
plate going in to bath 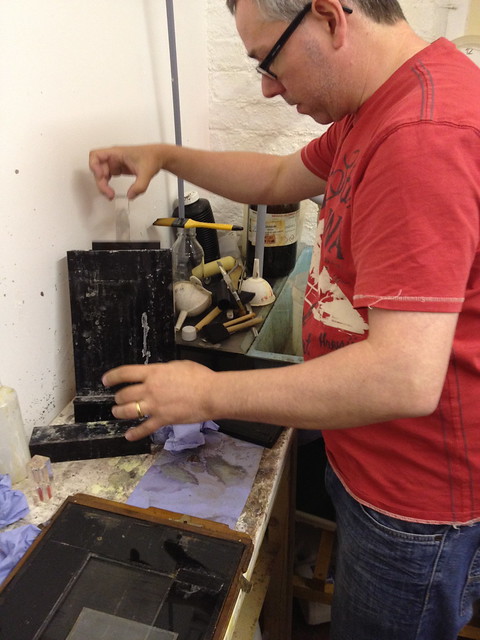 7: While the plate is sensitising you can set up your shot and focus the camera etc 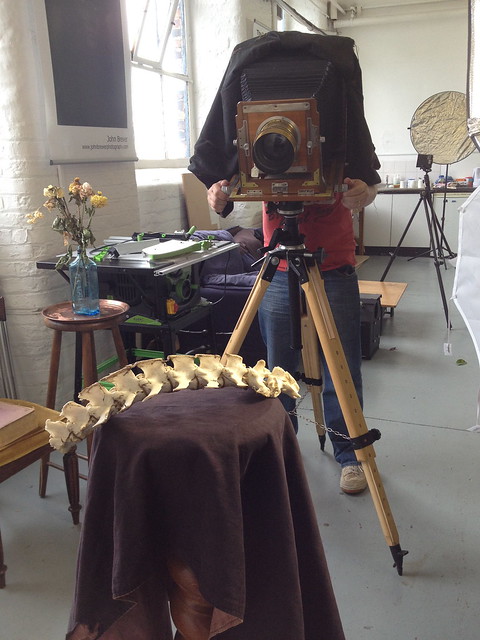 8: Next you go back to darkroom and go to light safe mode (red lights) and remove the plate from the bath. It then gets another clean on the back to get rid of excess chemicals on the non image face.
9: The glass plate then gets put in to the plate holder for the camera.
10: out of the dark room and you flip up the ground glass focus window of the camera and put the wet plate holder in its place.
11: Now you have a guess at the exposure time and cover the lens up. These vintage cameras do not have shutters. They don't have apertures really either although some have things called waterhouse stops which are discs you put in optical path to act as an aperture. However, collodion is so un-light sensitive you don't really want to stop the lens down. The shot that's coming up was an f6.3 petzval lens and a 7 second exposure. That was in direct bright sunlight on a saturday afternoon around 2.00pm in a large white walled third floor photo/art studio..
12: So with it all set you pull out the blank plate allowing the glass to be exposed to the lens, then you uncover the lens for the duration of your exposure.
13: Once that's done it's back in to the darkroom where, under the red light again, you remove the plate and develop it in 15seconds then pour a tone of water over the plate to stop the development process.
14: Now you can turn on the light as the plate is no longer light sensitive. It gets put in a quick bath of water to remove any developer from back of the plate. This is because the developer agent can react with the chemicals used in the next step to make highly poisonous gas.
15: The plate is put in the fixer that flips it from a negative to a positive. We were using a solution of potassium cyanide (told you it was dangerous).
16: Then it's back in to the water bath for 10 mins to wash off excess chemicals
17: Now its on to a drying rack for a few hours.

You'd think that was it wouldn't you. But no, there are more steps. The glass is clear. So in order to make the dark areas dark and black black we need to spray the back of the glass with black paint. We did this with black spray paint, two coats and left it overnight. Next morning we went on to varnish the image side. You need to varnish the image side because if you don't the silver on the image side will oxidise. Varnishing consists of pouring warmed up varnish liquid made from gum sandarac and lavender oil over your warmed up plate. You then use a hairdryer to warm the underside of the plate to help the varnish set. After 5-10 mins you can then leave the plate to dry/set on its own.

At every stage of this process you can cock it up. Even the varnish stageyou can have a cracking image that can be ruined even then.
All that above was about making an image on a glass plate. They are called ambrotypes. We also did ones on metal plates. They are called ferrotypes or tintypes. The beauty of those is they are already black on back so no need for spray painting or indeed, cleaning. The plate i am pouring in the image is actually not a glass plate but a metal one. It's blackened trophy aluminium like the stuff you'd get your name engraved on at bottom of a trophy. 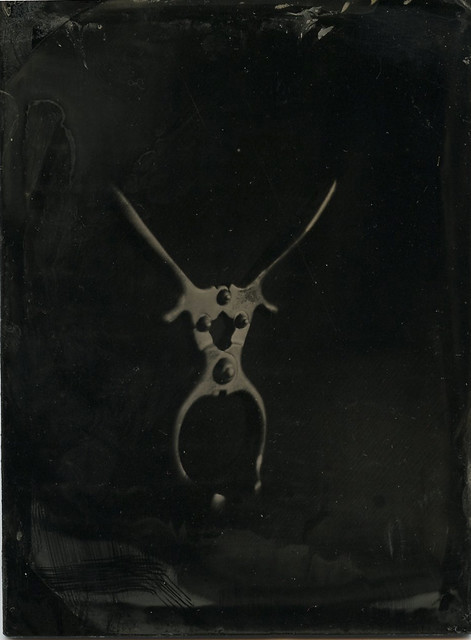 and here is the metal plate you saw me setting up in the above image. It didn't come out so well. The big black splodge in bottom left is called a developer island. It happens when you don't manage to get developer all over the plate as you pour it across. 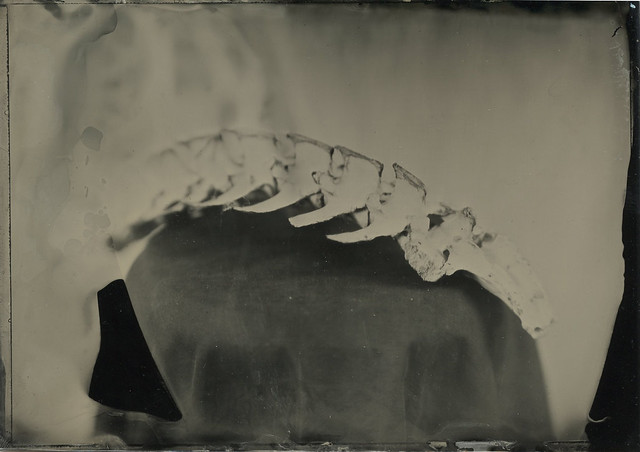 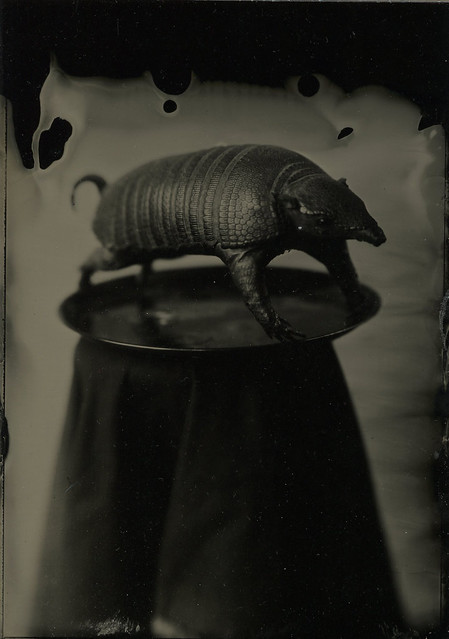 That was a really interesting post Gordon, goes to show we have it relatively easy these days with digital cameras and lightroom etc. No dangerous chemicals in sight. Looks like there is an art to developing the glass plates, in a chemistry kind of way. Would love to see more pictures from this camera, they have a kind of timeless quality to them.
My Flickr

Fascinating. I'm afraid I don't have the patience. However, over the years I've seen thousands of glass pates that were made using this process and I'm always amazed at the quality and detail that they're capable of capturing.

I'll be watching this thread with interest.
B

Definitely found it a very interesting post, me personally couldn't be bothered with all this work. But it is great that there are people like yourself and of course John from up north who keep the old processes and art forms alive.

AVForums Sponsor
I am slightly captivated by this process now. I was worried that i'd be stressed out that the images were one offs and that they couldn't be reproduced. I'm not so worried now i've scanned some. However, the scans don't do the plates justice really. The glass ones, like this image, have a sense of 3d to them. I suspect it's because the image is on one side of the glass and the black background is 2mm further back on the other face.

As Liquid has said, the other surprising thing about them is the level of detail in the plate. I guess when you think about it you are looking at a direct positive that is MASSIVELY bigger than 35mm or medium format film. Not only that, there is no grain in collodion so the image is incredibly smooth looking. Anyway, here is another. This was my second ever ambrotype, glass plate. The black section at top is the developer island issue. Basically you need to pour developer across the whole plate, covering it cleanly, in one go in under a second. You can't move slowly across the plate as the developing time is from 10-15 seconds...so if you take a couple of seconds to do it you've got one end of the plate more developed than the other. It's bloody tricky. When you look at the plate the swirlyness on right side is another developer issue. It's caused by a juddering motion of my pour plus too great an angle of inclination of the plate i think. Luckily it's a really nice effect in this image. 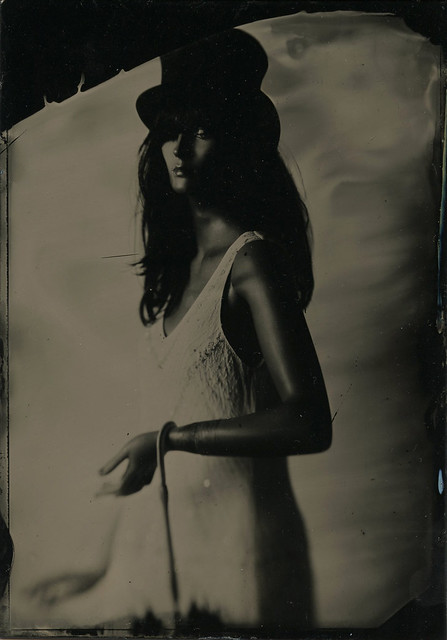 Tis is the only thing I miss about film photography, the fact that you have something physical. 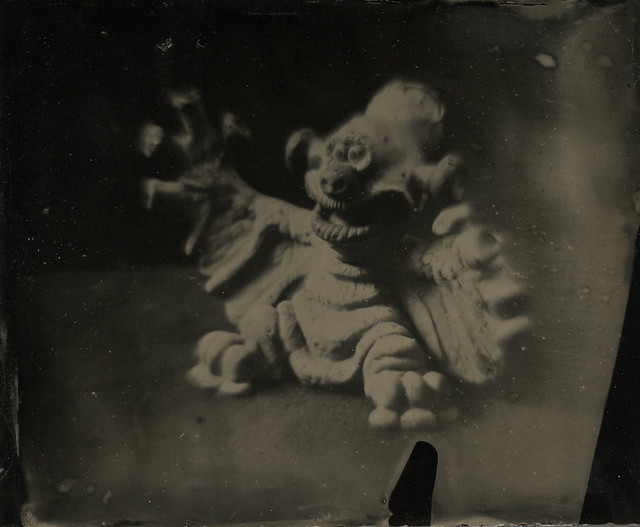 Excellent Gordon and a very interesting read.
I however, lack the patience to do something like that. You certainly got some great results. That last one does indeed look 3D.
My flickr 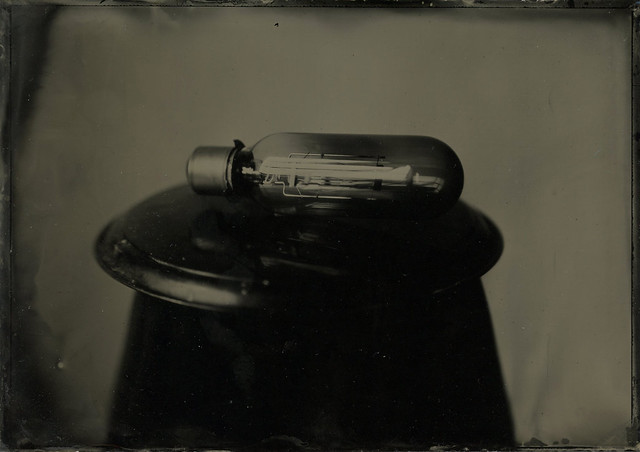 That has such a 3D feel to it, even on my iPad. Very interesting.