This thread is a continuation of this thread here http://www.avforums.com/forums/lcd-televisions/293464-hyundai-imagequest-q321-review.html

Thanks to Baloo for starting the original thread 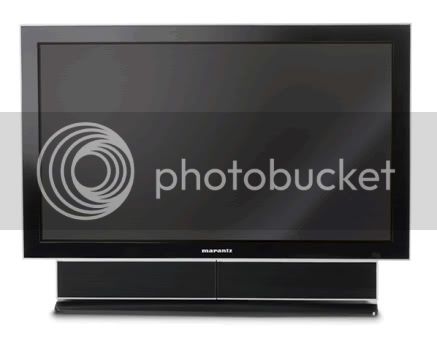 I've had this set for 3 days now so I'm still playing about with it but for those that don't want to read the rest then this set is great, now go look at the pictures

So a mini review. 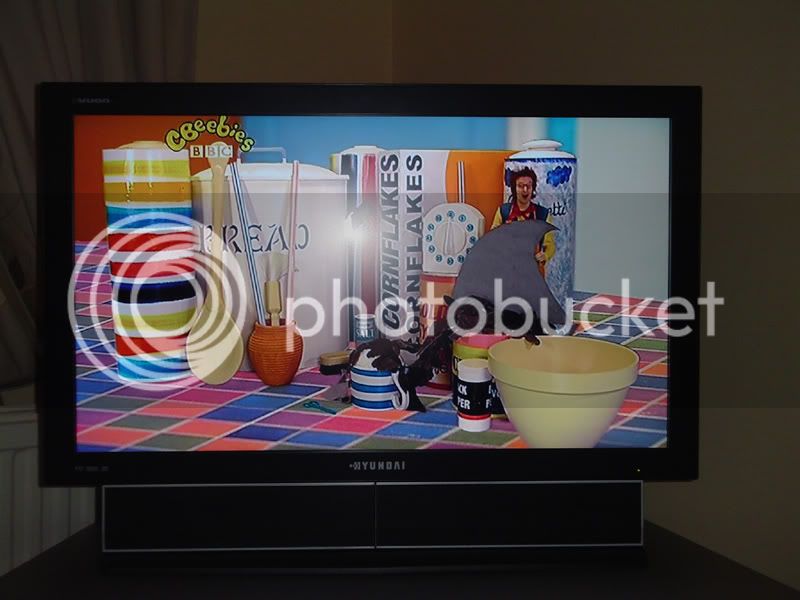 This LCD comes with built in freeview. The picture from this is really good. We have a signal strength in the 65%-75% range so nothing spectacular but it comes out nice on the tv. The Mrs seems to think that the picture is almost 3d like as the clarity and colours are so prominent. I say that its just a massive step up from our old tv that anything would look better.

One word of warning though, I don't really get on with the EPG that the Hyundai has, it just doesn't show enough information for my liking but then I normally run a HTPC box with MCE on it so the built in freeview isn't used now. 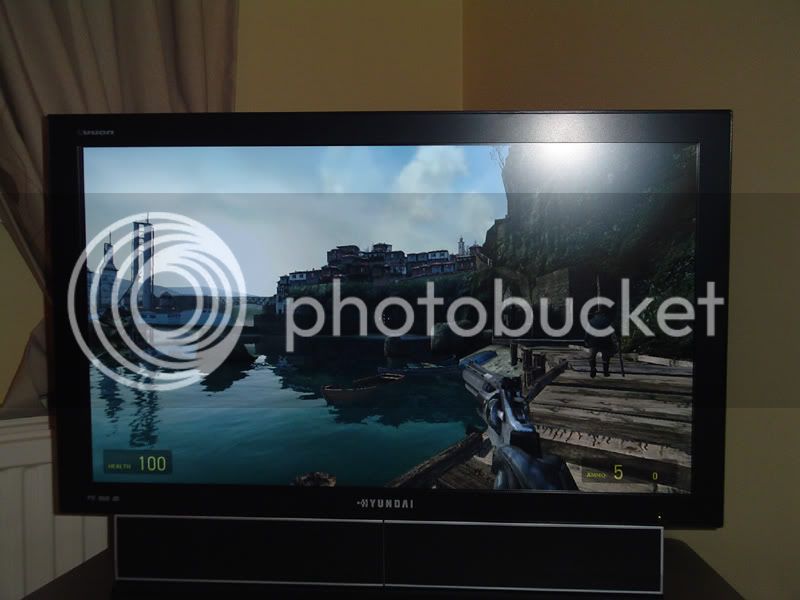 I'm running the LCD at a resolution of 1366 x 768 and it looks extremely crisp, easily as good as my desktop LCD. Text is very readable and games look fantastic. Playing Half-Life 2 is stunning and I haven't seen any ghosting on games such as pro evo soccer. 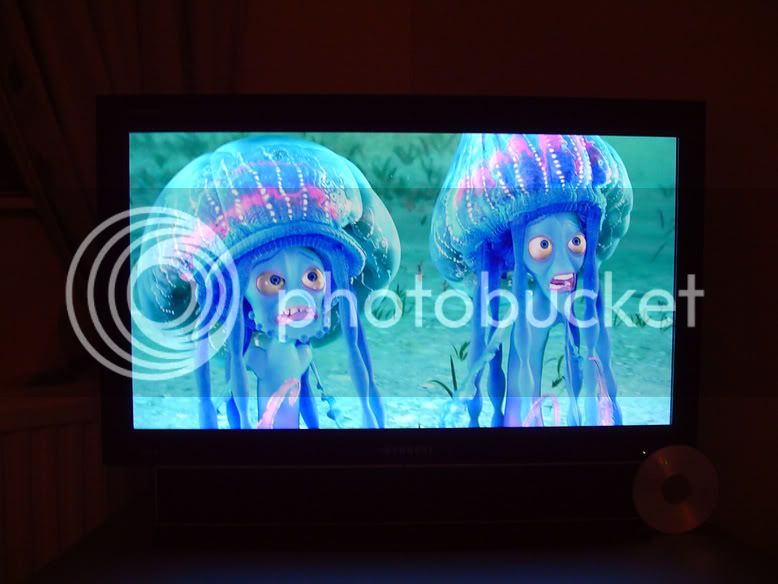 I've played a few demo clips from apple.com, divx.com and the Microsoft site. Compression is evident on the demo's from Microsoft, I suppose its to keep the download size down but it makes them not so impressive. The apple ones of recent films seem to be the best looking and I'm still waiting for a full HD movie to test the set out properly. Overall they look good.

I have yet to hook up my Samsung HDMI dvd player but the play back from my faithful old pioneer is good. As this set has a response rate of 8ms, I can't see any ghosting even on fast moving images.

I am very happy with the LCD. I first thought about getting the cheap Haier LCD from ebuyer for £599 but I discounted that as more people were complaining about the picture from a freeview source which I use all the time. My attentions then went to the Samsung 32" and although I liked the look of it (and the Mrs did) it didn't blow me away when I demo'ed it. I took a chance on the Hyandai and it really paid off.

The set itself if very good looking IMO. The thinner bezel around the screen makes it less bulky and more minimalist looking and the detachable speakers are a nice touch. Wall mounted I can imaging that this would look outstanding. The only drawback I have found so far is that the sound lacks some bass. Its extremely clear but lacks umph! (technical term ). I now run it through my amp and 5.1 system and I do note that the set has an output and options for a subwoofer but not having tried that yet I can't comment.

Would I recommend this set? Well its more expensive than a lot of the 32" models out there, but it seems to be the same set as the Marantz LC3201e which retails for around the £1500 mark (Home Cinema) so its cheap in that respect. So yes, if you can stretch that little bit extra than some of the cheaper 32" LCD's then you won't be disappointed.

RecordablDVDfan said:
Hmm I'm amazed this thread is still going. I broght mine almost 3 years ago now and have not looked at this thread since. Any worthwhile reason to upgrade the firmware etc ? Don't suppose it improves upon the very poor DTT and especially analogue reception ??
Click to expand...

"happy to be a part of the industry of human happiness"


AVForum Rules | AVF Hardware Reviews | Picture Perfect Campaign​
All opinions are my own and not representative of AVForums or other related websites.​
O

I still have mine 3 years on after buying one from reading the original thread. Mine is still going strong as well, no complaints really. I never upgraded the firmware though, but mainly use for Xbox 360 through component or upscaling DVD samsung player via HDMI > DVI.

I wonder if they ever did bring out another firmware upgrade ?
R

Anyone know how much you can get for Q321 lcd now if i was to sell it?

Plus the best place to list it for the most money / interest?

I've only just found this monster huge thread in the past few days because I've been using this TV for the past 3/4 years just fine with my Xbox 360 and PS3 and Sky+, and recently updated my subscription to Sky+HD. Which of course led me here when it didn't work.

Does anyone who had any involvement in the original thread have any advice about what to do now? Do I have anything I can can do with a TV that has to be out of warranty by now, or have I just made a mistake that's going to cost me £700 or so to fix?

Anyone from novatech who has any experience with fixing this TV's issues, or anyone who managed to fix their box with firmware replying would be a godsend that I'd be permanently grateful for.

Thanks in advance to anyone with any comment, I'll be here waiting (not much else I can do in its current state).
R

What is the problem you have that fact you can't connect the sky HD box to the Hyundai ?

I was also considering upgrading to Sky HD but not all boxes have the component connections on the back it seems, the latest boxes don't I think ??

So there are solutions, but in a few years I will sell mine, when the new Freeview HD Samsung appear probably
Last edited: Jul 11, 2009
R

Anyone know how much you can get for Q321 lcd now if i was to sell it?

Plus the best place to list it for the most money / interest?

You are not going to get much now when you can buy a good brand 32" for over half the original cost of the q321. I guess about £200 odd if you are lucky, the lack of any HDMI connections is a big minus point and was very short sighted of Hyundai not to include at least one at the time

RecordablDVDfan said:
You can get an hdmi to DVI adpater of course and then you can output the sound to an amp or the TV
Click to expand...

I currently have tried two different DVI to HDMI leads from the DVI port on the Q321 to the Sky+HD box, both give the same issue of picture in perfect quality for about a second, then a flash to static then black screen, only to repeat the whole mess again after a few seconds.

I've updated all the way up to firmware 3.18 and the same issue still happens. It looks like a classic HDCP handshake problem, and I'm assuming if I can't get it fixed by anything other than a DVI controller replacement on the TV that doesn't seem to be available anymore, I've just bought myself a £10 a month brick (as I already have a Sky+ box)?

The sound hooked up from optical out on the Sky+HD box to my hifi system works just fine. Has anyone had any firmware update success with Sky+HD?
R

RecordablDVDfan said:
I was also considering upgrading to Sky HD but not all boxes have the component connections on the back it seems, the latest boxes don't I think ??
Click to expand...

Sorry, just properly noticed this quote. It seems that the Sky+HD boxes haven't had anything other than HDMI and SCART on for ages now. You either need proper HDCP DVI/HDMI (the type that actually works and wasn't implemented whilst the spec was in draft form) or you don't get anything above RGB scart quality.
R

Hmm some sky plus HD boxes I've seen on ebay have the component connections on the back...one of my HD sat receivers with an hdmi to dvi lead works fine (used for 4HD and BBC/ ITV HD)

I guss there is an HDMI to component lead / adapter also you could try ? Sorry about your problem. What is the cheapest deal with sky HD btw think about £27 a month minimum is that right ?
R

RecordablDVDfan said:
I guss there is an HDMI to component lead / adapter also you could try ? Sorry about your problem. What is the cheapest deal with sky HD btw think about £27 a month minimum is that right ?
Click to expand...

That adapter would need some sort of way of stripping the HDCP and would probably cost as much as a new TV, and run the risk of being broken with any encryption key change, so I think I'm screwed. boo.

The HD addon is £10 pcm, and the lowest subscription is £16.50 so you were pretty much spot on with your guess.
Bear in mind that the HD pack only adds HD versions of channels that you pay for, so if you get one channel package, you're getting like 3 HD channels for your £10, you're probably going to want to go for the 6 channel package £21 and add the 10, up to 31. the difference between 27 and 31 is like 140 channels and about 12 HD channels.
it's what I went for.

Not that it matters now
R

Oh the hdcp thing yes forgot about so you really are stuffed unless you used your sky card (dragon cam needed) with another HD sat receiver ? Not that this would work I guess it does with a sky plus / freesat card

Think I'll stick with my 3 or 4 FTA HD channels for now until the new freeview HD tellys appear as I say...

I tried the VGA HDCP stripping via HD Fury but this doesnt work as the VGA connection on the Q321 is no good for the resolutions SKY outputs at.

In the end I had my TV upgraded by Novatech (bought about 3 years ago) to work with SKYHD. I think Novatech replaced the HDCP chip on the TV to make it handshake with SKY properly. before that all I got was a picture that rolled like on old CRT TVs where the vertical hold was wrong

Since the update the TV has worked fantastically over DVI with both my SKY Samsung HD box and also my Apple TV.

Have to say as well that the picture quality from the Q321 is far better than a number of more recent models I have been looking to upgrade to. Especially on SD video, either from SKY, my Apple TV or on DVDs.
Last edited: Aug 3, 2009
Steam: t1nners

Has anyone experienced any problems after retuning the Freeview tuner in this set?

Seeing that few of you already upgraded firmware on Q321, can anybody post steps which must be followed to successfully apply the latest firmware?

Can you also mention what mode should a TV set in when applying new firmware? Got the cable and the firmware..guess thats a good start

Apologies for the old thread bump

Thinking of breathing a little life into my trusty Q321 by linking up to an AppleTV2. Obviously this old boy didn't come with HDMI so I'd have to use either a HDMI>DVI or a HDMI>Component.