How to consistently change PAL into NTSC?

This is driving me nuts so I hope somebody can help me. I just moved to Belgium and brought my American NTSC Nintendo 64 with me. Here, I bought an LG 49UN710006LB. Naturally, when I plug it in, the image is black and white. I expected that. I didn't expect it to be so hard to just change it into NTSC. Now you might say it's impossible, it just doesn't support it, and I would be willing to accept it if I hadn't already got it to work a number of times. Just yesterday I thought I'd figured it out that by running the programme tuning feature, it just started working (even though the console is plugged into the AV port which has nothing to do with cable, antenna or satellite.) I ran the cable tuning, it found nothing (there's nothing plugged in there) and when I went back to the AV channel it was in color. Today, however, it doesn't work. So it seems I must have done something else that isn't obvious. There is no obvious place on the menu where you'd expect a simple PAL/NTSC switch. It's pretty ridiculous that in 2021 it's harder than it was in 1995 when every TV in the world just had a button on the remote that did just that.

Any help would be greatly appreciated.

Thanks in advance.
Sort by date Sort by votes

No replies but I'll leave my solution here in case anyone in the future ever struggles with this, too. The TV technically does detect and automatically switch between PAL and NTSC when you turn the console on. It is just super inconsistent about it. If you basically turn the console on and off a bunch of times, it will eventually work. In fact, I've found that things like blowing on the cartridge helps. This makes absolutely zero sense to me and it is quite a mystery but, hey, I can play Smash in color now (after some fiddling).
Upvote 0

lyanporto said:
In fact, I've found that things like blowing on the cartridge helps.
Click to expand...

I'm just as flabbergasted as you are. I would not have posted it and followed it with saying it made no sense if that's not what I had found. It did seem to work more often when I did that than simply turning it on and off again, but I agree it makes no sense. I'm actually considering running a large number of test trials to ascertain if there is statistical significance to this or any other technique (removing and plugging the cables back on, etc.) Nothing makes any sense. Why can a hi-tech TV in 2021 not consistently detect what signal is coming in? Baffling.
Upvote 0

i'll save you the time of doing any further testing.
blowing on cartridge had nothing to do with whether the TV switched to NTSC or not.

ahh the welcoming warmth of strangers on the internet
while I appreciate being made fun of by you, if you have nothing helpful to say regarding my problem, just go on about your day, would you?
Upvote 0

come on, you serioulsy put forward that blowing on the cartridge helped the TV switch formats and you didn't expect someone to pick up on that?

i don't believe you seriously think that either.

it's more likely, as you mentioned, that the powering on and off numerous times had something to do with it. spraying the catridge with your exhaled saliva did nothing other than spread germs.
LG OLED55CX5LB | Sony HT-ZF9 | Nvidia Shield TV Pro (2019) | Sony BDP-S6700 | Logitech Harmony Elite
iPhone 12 Pro | Apple Watch Series 6 | Homepod Mini
Upvote 0

yes, as I mentioned, I already know everything you're saying, including that I don't believe it, it doesn't make any sense, but neither does it make sense that it sometimes will work and not other times
but I appreciate your concern for the spread of germs in my living room 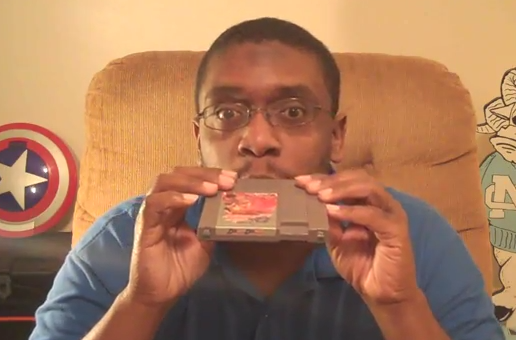 If you played the NES, SNES or Nintendo 64, you’ve probably blown into a cartridge or two. The quick-fix trick cleared out any dust that was preventing games from working properly — or so we thought.

LG 42LK530 screens turns on and off after transport