Well after looking at everyone else's setups I thought I'd finally get some pics up of my lounge.

It's nowhere near as flash as some others on here but it's changed a fair bit in the last six months or so, plus I'm getting married soon so at the moment the wedding fund is more important than the home cinema fund! Once that's gone though I'm planning a major upgrade

Anyway, up until about 14 months ago my home cinema consisted of a Samsung 28" CRT TV, a JVC home cinema system, PS2, Gamecube and a freeview box. Then the TV went kaput so I decided to invist into the world of LCD, so along came the LG 32LB75. At the same time I ditched the JVC and bought a Sony all in one job...biggest mistake ever. Compared to the JVC it was useless. No inputs, poor sound, worse picture, however the other half liked it as it was black so matched the TV

Anyway last year I got a PS3 (and a Wii) so wanted to make the best use of those. So I got rid of the Sony

and decided to go the seperate route instead as it'd let me upgrade in the future easier.

Therefore I got the amp from the forums here, a set of surrounds from RS and Sky+. Also bought a cheap DVD recorder which is used soley to dump the other half's rubbish off the Sky box onto DVD. 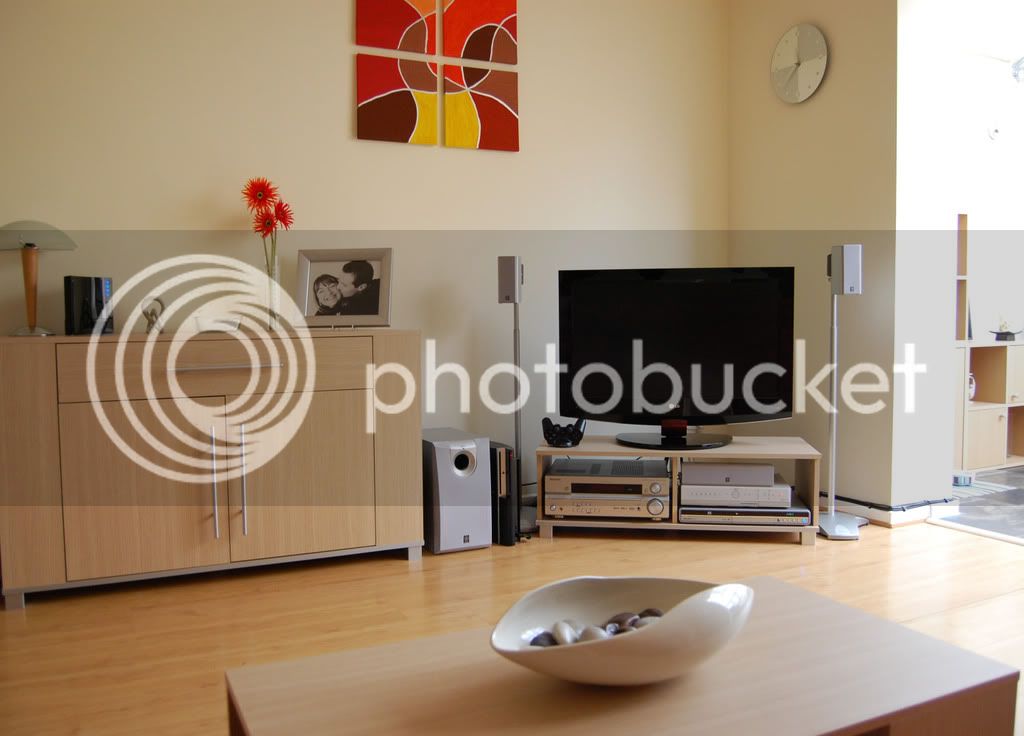 The front - unfortunately at the moment it has to go in the corner. Looking to move furniture about (when we next decorate) and wall mount the panel and fronts. 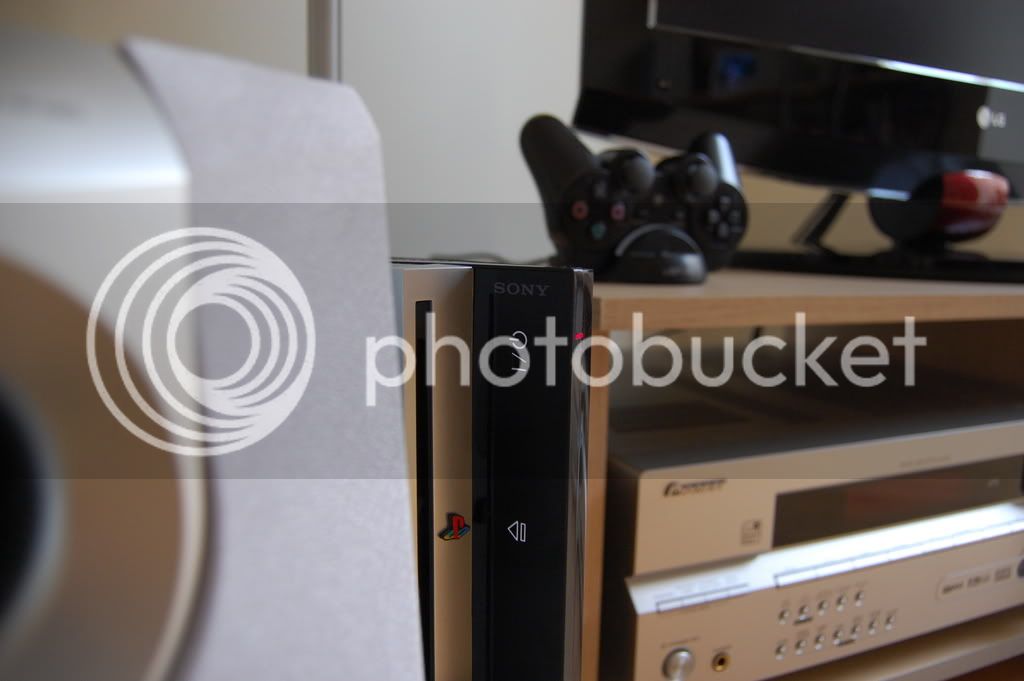 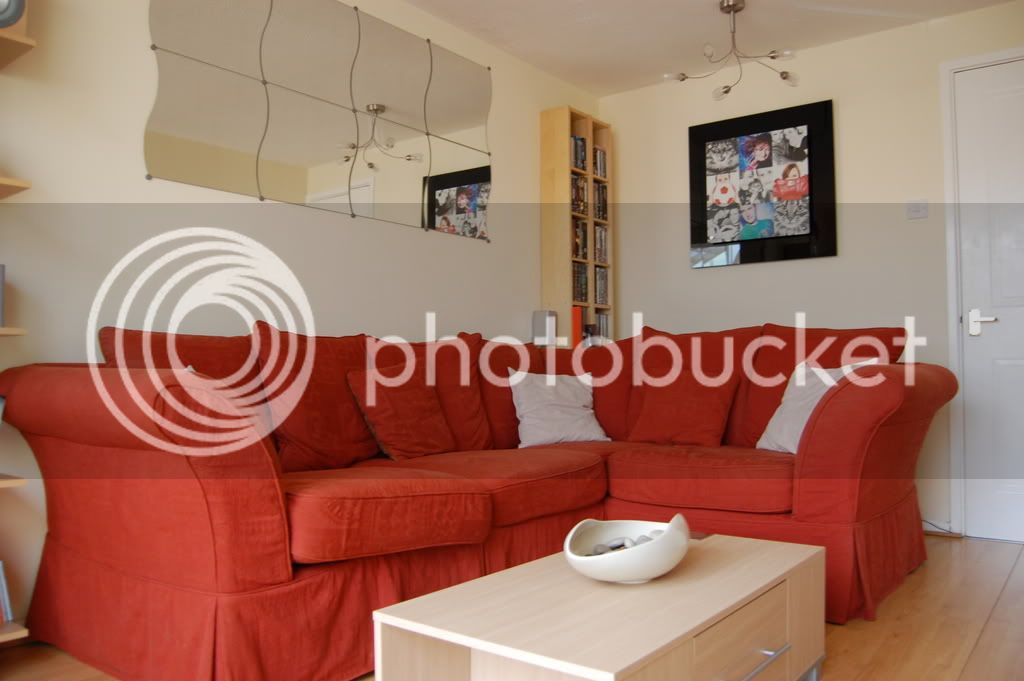 The back - you can just see one of the rears. The other is on a shelf to the left. I need to mount these higher up really. 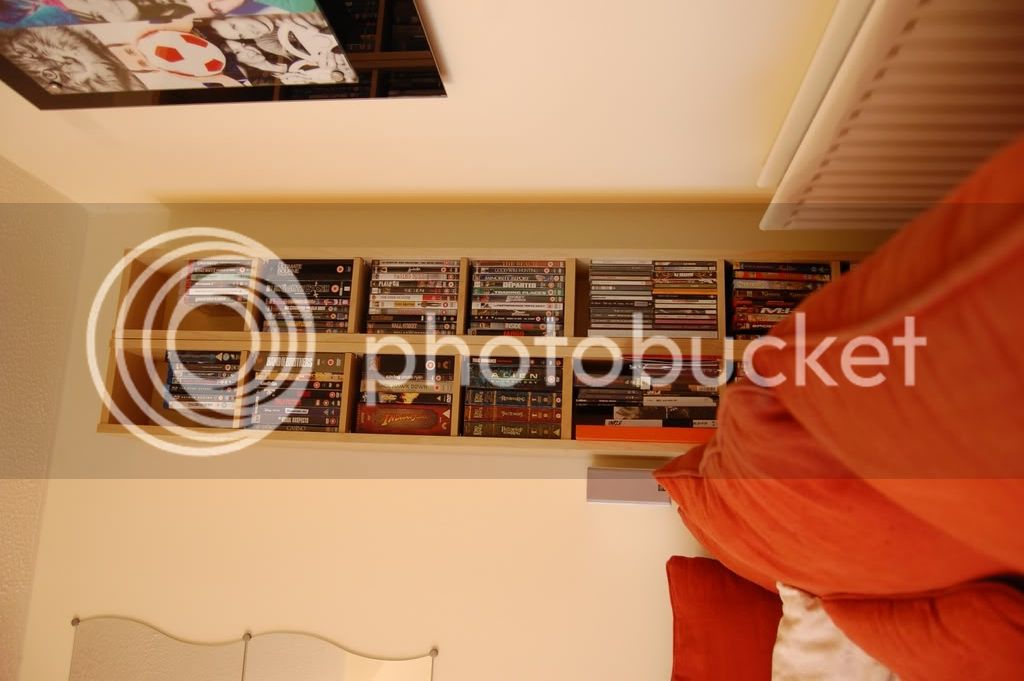 DVD/Game and Bluray storage, plus some of my UNKLE CD's/DVD's and book. I have another cupboard full of DVD's too. 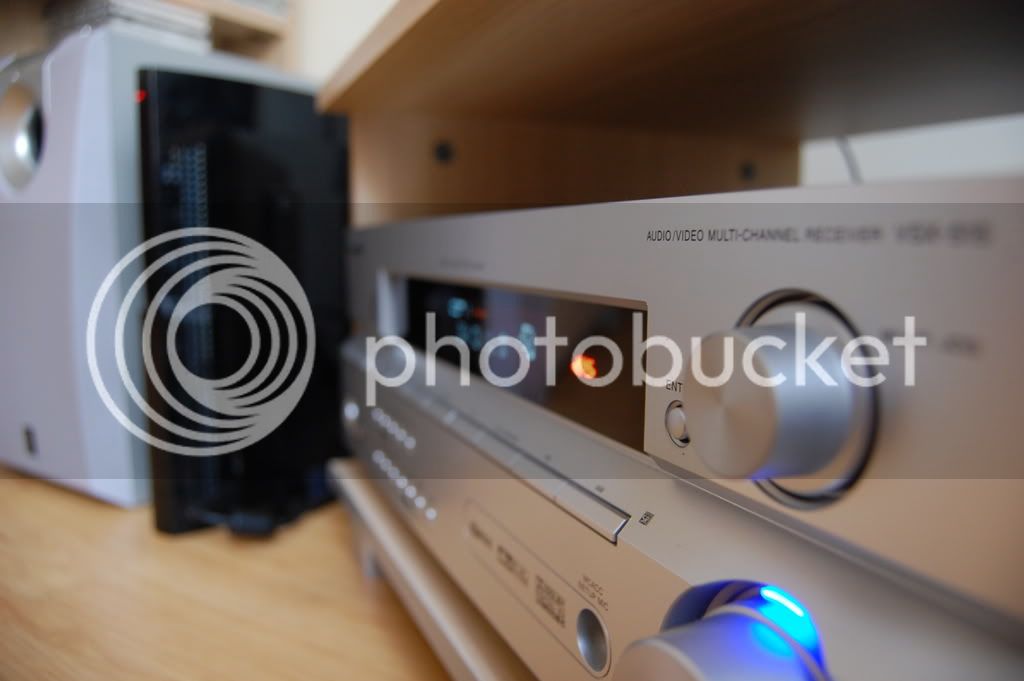 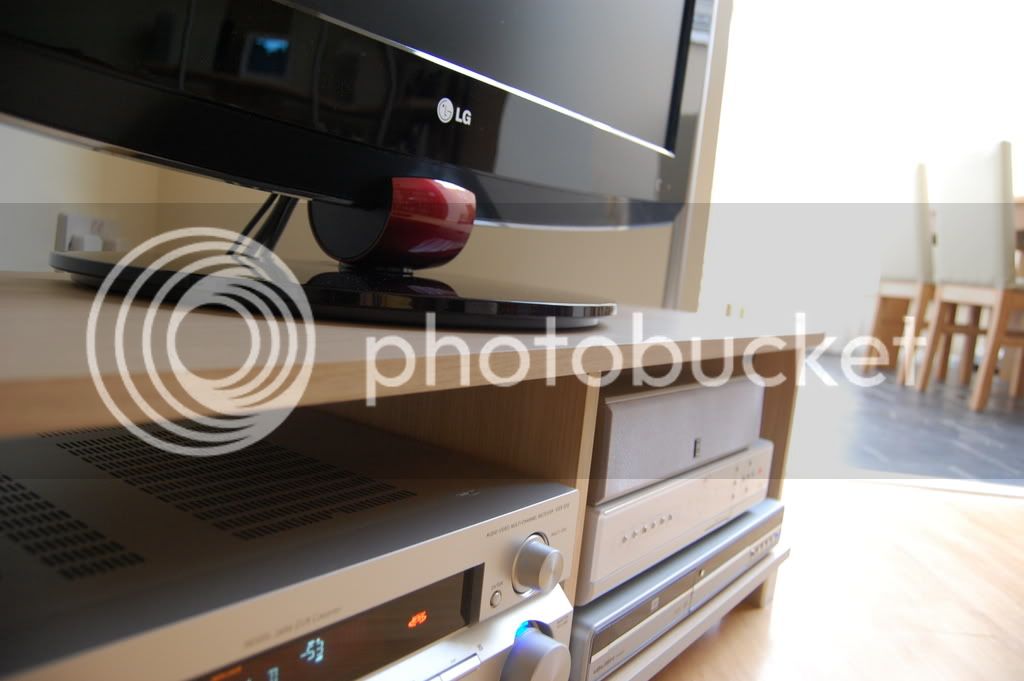 I also have a Wii which is upstairs in the computer room, along with a laptop with a 250GB WD external HDD which I use to store all my music and some films, which I stream through the PS3.

The next steps for me will be a new panel along with a set of better surrounds and a HDMI amp. Also I'd like to get a proper HTPC sometime. Oh, and a Harmony to replace the 5 remotes! I'm afraid it'll all have to wait until after I tie the knot though....

That's a really nice set up you have there

Can I ask what camera you used for the pictures?
They look superb? The close ups are sweet.

I'm interested in a DSLR myself so wanted to ask...

No, not really. I just wanted a nice starter type DSLR, nothing too expensive. It was about £250 I think. You could probably pick it up cheaper though.

ohhh that is good...

I'll check that out

Love the light wood feel
And the mirrors funky

that couch looks comfy as hell!

I think I could lose hours on the thing

I'm getting married soon so at the moment the wedding fund is more important than the home cinema fund! Once that's gone though I'm planning a major upgrade
Click to expand...

Thats a nice tidy setup you got there

Nice mate i have that same exact Pioneer reciever, how do you find it mate.

Thanks everyone, nice to hear people's opinions.


Movieman21 said:
Nice mate i have that same exact Pioneer reciever, how do you find it mate.
Click to expand...


Well it's my first 'proper' AV reciever so compared to what I had before it's miles and miles better! To be honest I've always had a soft spot for Pioneer stuff and i'm not disappointed by this either. It's simple to use, has enough inputs for me (at the moment ) and looks the business too. Oh, and it sounds great with both films and music. I'd definately consider upgrading to another Pioneer amp. The only thing it lacks is HDMI, but small steps I guess.....
Panny TX-58DX802B | Panny DMP-UB700 | Denon AVR2400H | Q Acoustics 2050i, 2000Ci, Tannoy rears, Onkyo Atmos, BK Gemini 2 sub | Synology DS213J | Harmony Ultimate | Sky Q| PS4 | HEOS 1 and 3
My Flickr

well after checking out the camera, I have picked one up on ebay...

should be here next week....

cheers for the info on it... can't wait to get playing with it 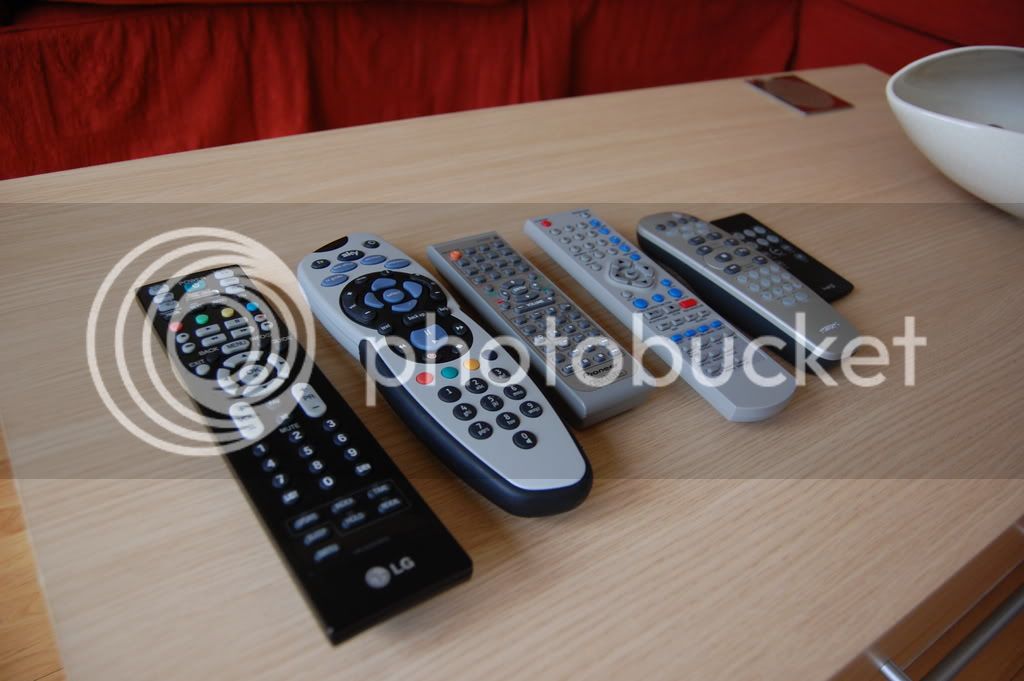 In with the new! 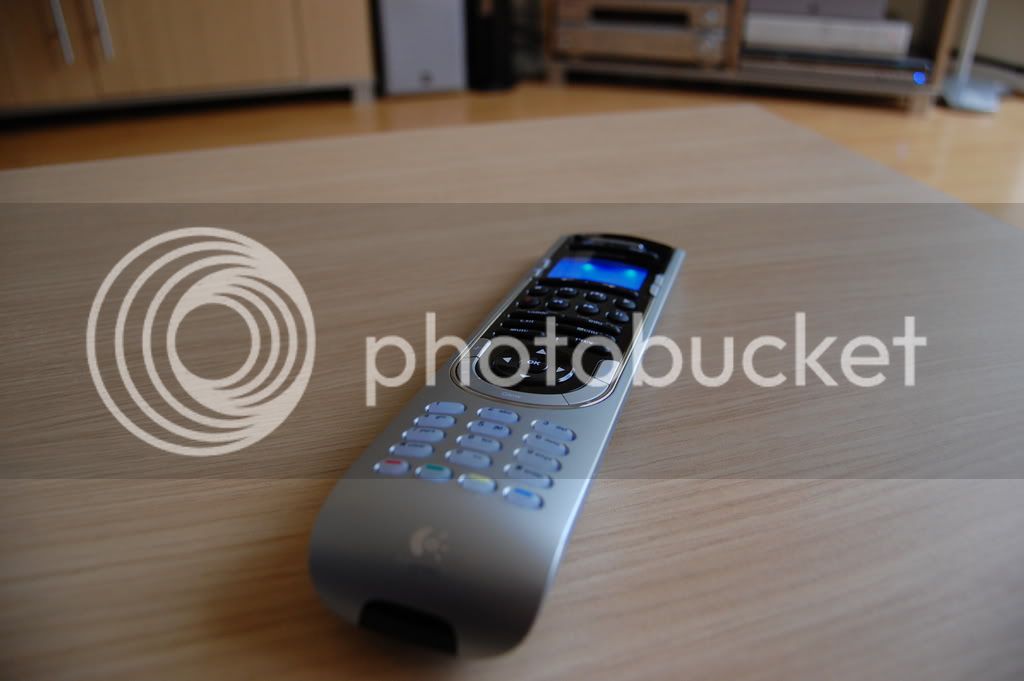 Can I have your sofa, looks comfy!

So far love this little gadget. Easy to use and miles better than having a load of remotes sitting around.
Click to expand...

Could I ask where you got the CD/DVD rack from, and how many do they hold?

Also, is it me or do you have a dedicated holder for your ps3 remotes? If so what are they?

Thanks
...has now moved on to new interests, but still has a passion for all things noisy and shiny!

Could I ask where you got the CD/DVD rack from, and how many do they hold?

Also, is it me or do you have a dedicated holder for your ps3 remotes? If so what are they?

The CD/DVD racks are from Ikea. They're called Benno and are about £20 each I think. They come in a range of colours too. They hold upto 180 CD's or 88 DVD's, although you can move the shelves about and get a combination of the two like I have.

The holder for the PS3 remote was a cheapie thing I picked up from Zavvi. You can get them from HMV aswell I think, about £9. Made by 4gamers. They connect via USB and charge the remote too. I just wanted somewhere to store it more than anything and I have one on charge while using the other normally.
Panny TX-58DX802B | Panny DMP-UB700 | Denon AVR2400H | Q Acoustics 2050i, 2000Ci, Tannoy rears, Onkyo Atmos, BK Gemini 2 sub | Synology DS213J | Harmony Ultimate | Sky Q| PS4 | HEOS 1 and 3
My Flickr

Great! I could probably get away with 2 or 3 of those without affecting the room too much.

Thanks again
...has now moved on to new interests, but still has a passion for all things noisy and shiny!
You must log in or register to reply here.

Home cinema on a budget