Home set-up on a financial diet


For context, here are my 2 set-ups before I embarked on el-cheapo home cinema&#8230;


About 3 years ago in our old rented property: 32&#8221; Philips TV, PS3, B&W Zeppelin (Wedding present!) and the beginnings of my PC build on the floor 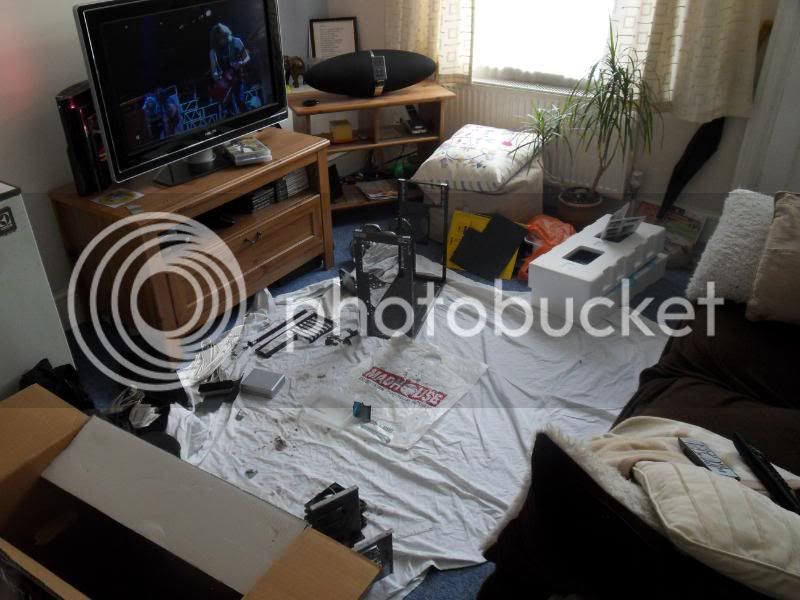 About 1 year ago > 3 months ago (sorry about it being cut off at the sides...was really for the PC I'd finally finished!): MS Aviano 1XR, Soundsytle Z2 stands, Cambridge Audio 540A

After persuading my wife that a subwoofer would be nice to add to our stereo set-up, I began researching and ended up here. In the best possible way, that was a big mistake! After asking a few questions (thanks BlueWizard) I decided that more upgrades would be good, and my wife suggested that we turn our bedroom into a guest/cinema room and decorate the dumping ground that was our spare room.

As we live in a smallish 2-bed terrace with (2 bedrooms, 1 living room, bathroom and kitchen), and only have a limited amount of money to play with, I had some concrete figure limits to what I could spend and couldn't want/need a massive projector and SVS subs etc&#8230;though I plan to save for a millennia and eventually get them along with a mansion, gymn, pool etc. I set about ebay and the classifieds on these forums, and found various deals until what you see below came about: 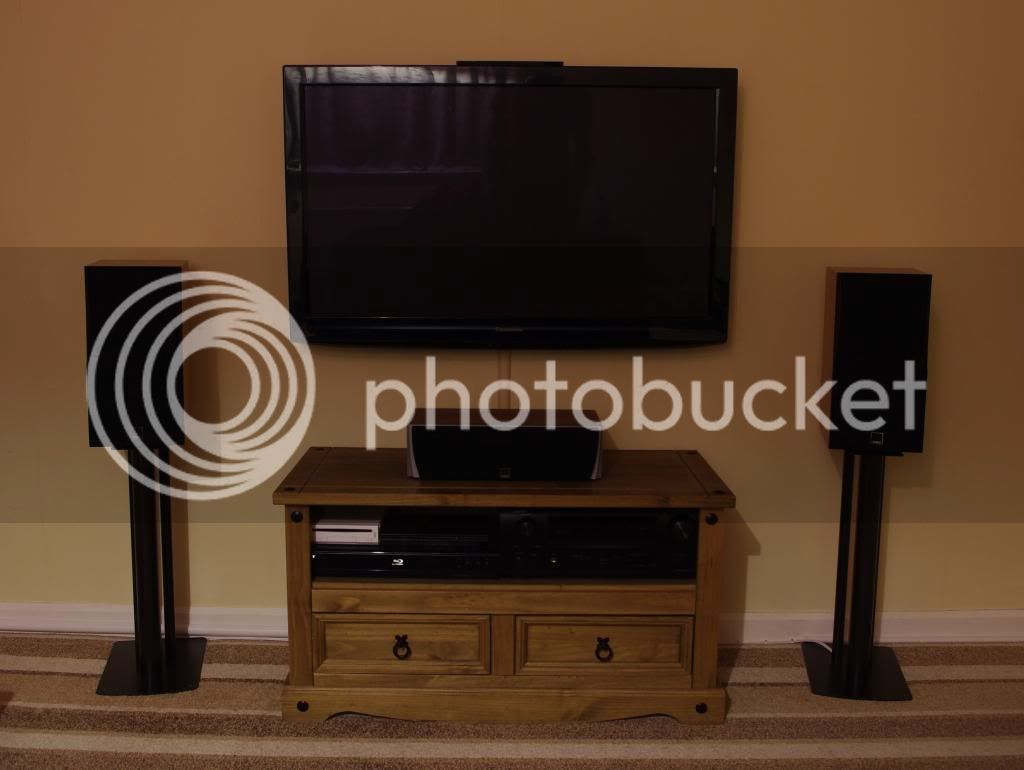 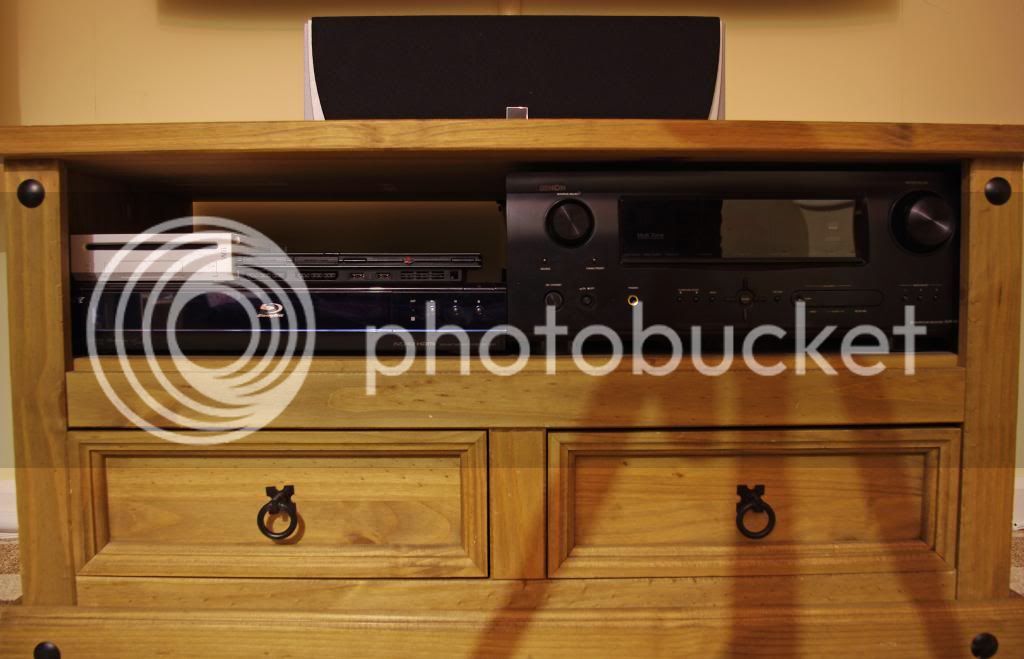 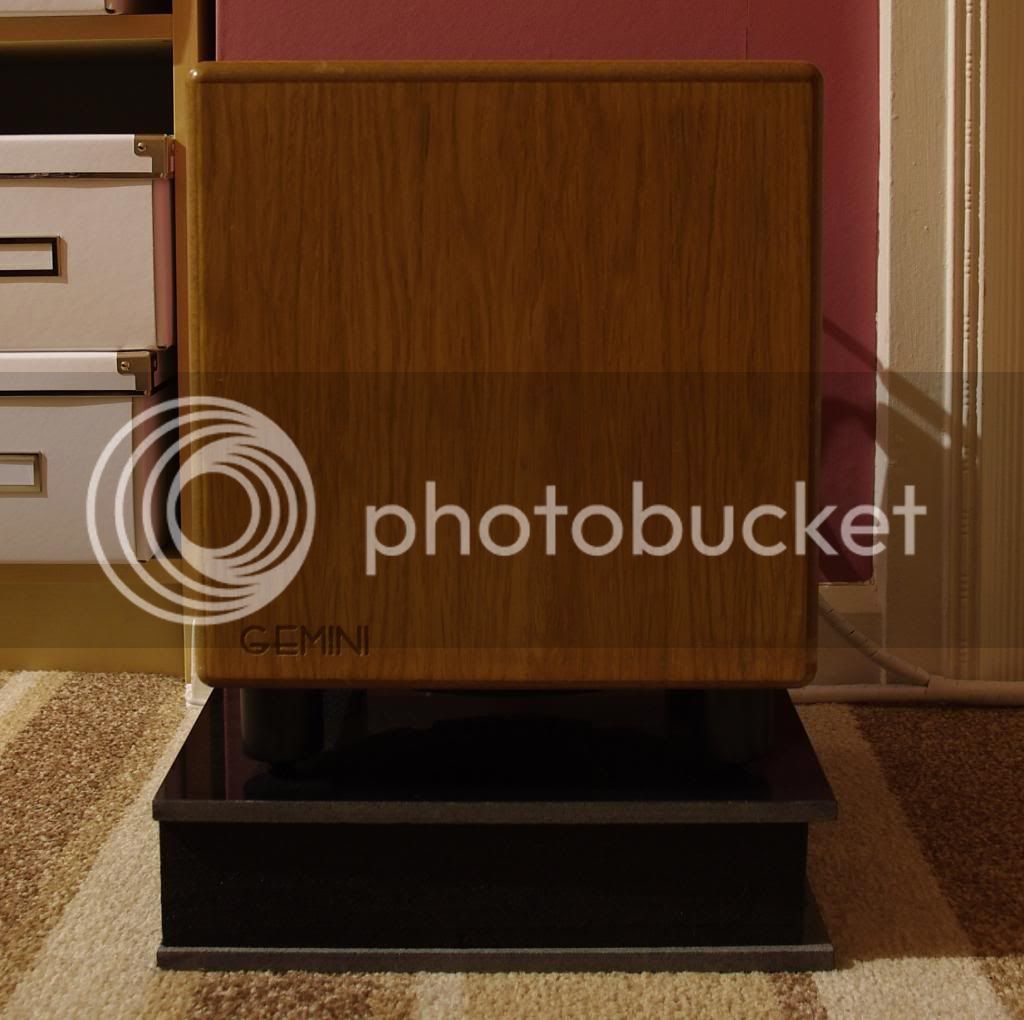 The riser for the sub is two granite tiles with a block of closed cell foam between. I don't know if I makes much of a difference to the sound as I didn't do any critical listening before I set it up, but at least when my wife's downstairs she doesn't now think the floor is about to fall through and it was a damn site cheaper than anything by Auralex! 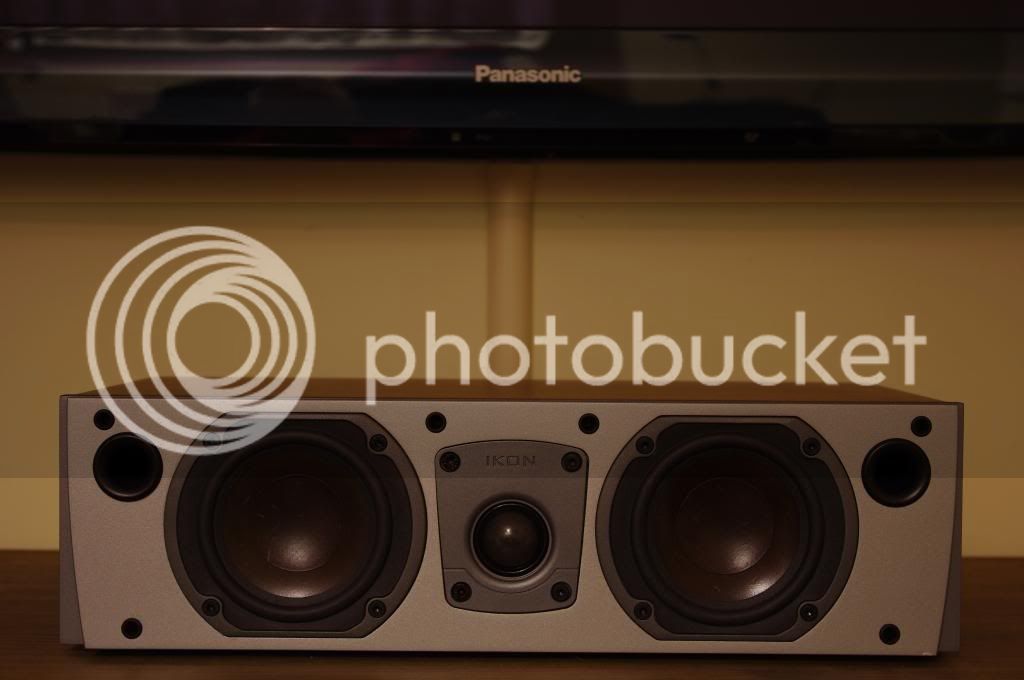 Before I settled on the Dali speakers, I bought some Monitor Audio Radius 270s + a 225 off ebay, which I hated (looked gorgeous, sounded like a bee was trapped in the speakers, and mid-range was severely lacking for music) and some little MA B1s &#8211; nice but I felt I could get more for the money. One thing they did highlight, however, was that my Avianos were just all boom and lacked clarity &#8211; I had tried to overlook this before but hearing the difference helped me decide that speakers that aren't fussy about placement were key. The Dalis are to my ears, superb. They don't boom at all but deliver solid bass and are revealing without sounding harsh.

The sub was easy &#8211; I sought BK for the lovely veneers and acclaimed sound, and picked up a Gemini MK1 on ebay for £105 delivered


Now I have everything set up, I'm as pleased as punch. The Denon outperforms my old set-up with music (I know it's an AV receiver but to my ears sounds great), and the sub really adds to the bottom end with it's high level connection. It performs movie duties through the low level connection (I love how malleable AV receivers are) and for my smallish room tunefully thumps more than enough. 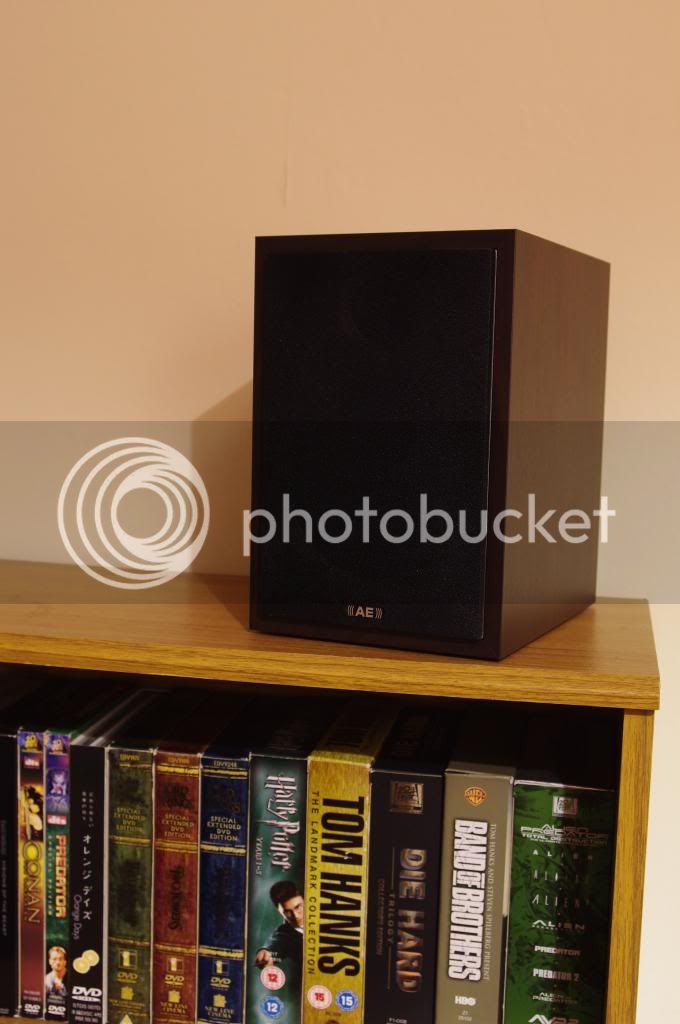 I picked up a couple of Acoustic Energy compact 1 speakers only a few days ago, and moving from 3.1 to 5.1 has put the icing on the cake &#8211; they're great little bookshelf units and because of their size and my cable management, my wife approves. I need to play around with the port bungs to get the best sound though, and I will be mounting them higher in the next few weeks as they are too obvious to the ear at the moment, particularly when sitting on either side of the futon.


One thing I have also found out &#8211; I am not a fan of reference levels of bass, at least not in my imperfect room. I've never heard really expensive subs in treated rooms, so can't comment on what they sound like, but in my place I prefer to notch it down&#8230;it all sounds a bit more even to me. I will try to source an anti-mode to see what that does to the sound, and save up if it does the trick.

I thought I'd give you the price of this lot &#8211; what I think is great value and whole lot better than the all-in-ones I used to peddle at Comet (those poor people didn't know better, and I had no choice &#8211; damn you Bose!)

I can't include the TV in the costs because I won it in a competition while at Comet &#8211; the only good thing that came from that place, and a good thing it is too


As the room is also for guests there are a number of compromises &#8211; the walls aren't chocolate brown and covered in acoustic panels - I'll win that discussion eventually! I might also attempt replacing the glass above the door and plastering it up to stop the damn thing vibrating when the bass gets going. It'll also give me a nice flat wall to try some uplighting


And finally, a lovely black and white &#8216;this is how the home cinema looks to me' from the sub: 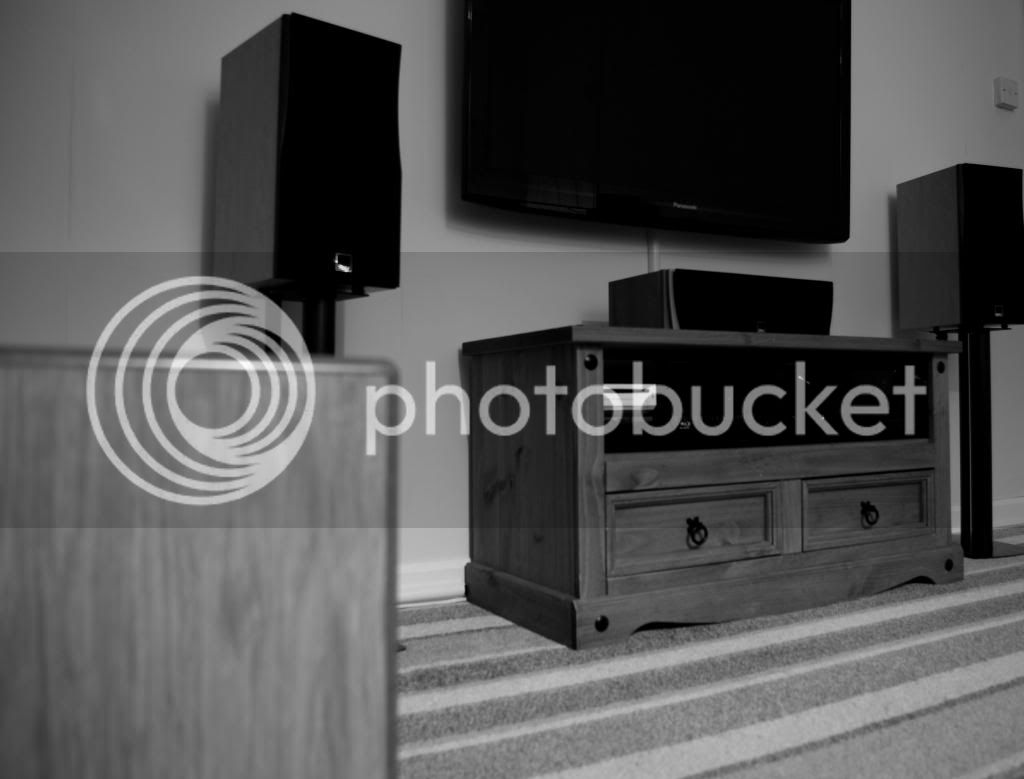 Just a quick question - do you have enough space in your cabinet for your Denon? May get a bit hot in there?

I was a bit worried about the Denon, but the back of the unit is open (opened by me with a hammer ans saw!) and runs really quite cool even after a long film. I keep reaching round the back expecting to get my fingers burnt but it's only ever mildly warm

Will post pics up as the room progresses
A

Very nice, i also like your home made riser.
B

I have now move both rear speakers up and mounted the right one on a shelf. Will post some pics soon...out for a meal with my wife now, then we're watching Looper on bluray - at her request
M

Maverick!! said:
Love it all mate, nice and neat and tidy
Click to expand...

Cheers. Have looked at your thread...have you thought about changing your front speakers to something with front firing ports? Then you could move it all round and the speakers will go close to the wall like mine.

I love the innovation in making your own sub riser. What a great idea and well done overall too.

I enjoyed Looper, thought provoking and cool. The audio was great with the new set-up, although I found some moments a little unnecessarily bass heavy. Also, lens flare was set to max!

yeah, your right about the heavy bass in places. I forgot that.

I turned the sub down quite a bit, but still had to keep the remote control at hand to adjust the volume now and then cause on heavy tracks like that, it usually wakes one of the kids up.

Nice setup - heck, stunning for the price!! The Dali centre makes me nostalgic too, of a time when I had spent a lot less on this stuff

What do you play BF3 on? i play it on the PS3, fantastic game, wish i had space for a surround setup to enjoy the game in 5.1

BF3 on the PC - not playing it at all at the moment though as there are so many other games old and new to play; currently making my way through FF8...again

I did enjoy playing games on my PS3 until it died just before Christmas last year - not FPS's though - can't be doing with thumb-sticks when I have a mouse and keyboard gaming machine nearby!
You must log in or register to reply here.