I'm having an extension, and the ceiling is currently opened out. So I want to run cables to 4 ceiling speakers and 4 rear/side speakers.

Updating the speakers after extension

Hi, I'm having an extension built at the moment, so with the ceiling ripped open, I'm going to install some ceiling speakers and neatly place cables in the ceiling for them + rear speakers. Previously it was in trunking around the skirting boards. Room size for the TV area is 4.2 x 3.3m...

I assume, I'll need to run from the AVR to the wall plate, and connect using banana plugs.
With 8 speakers, that will be 16 plugs in total.
4 pairs of cables to the ceiling speakers
With 4 pairs going to another wall plate at the back of the room, where I can then connect in cables for the 4 rear speakers.

Is it worth fitting banana plugs, or just screw into binding posts like on the AVR?
Also what do you recommend as the plates to use. 16 connections seems like a lot, but there are 8 speakers. 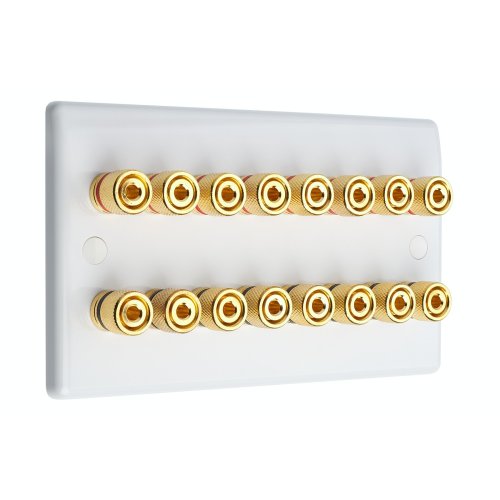 Photos attached, just bind the cables like on the AVR?

AVForums Sponsor
So for every speaker, if you was to fit banana plug at each end of a run of speaker cable, then you would simply have four plugs (two positive, two negative). So the math for eight speakers would be 8x4=32. As you will not be connecting the atmos ceiling speakers with wall plate (MWP) with 16 connections. Is this right?

If this is right, then you will require 32 banana plugs and as none of these are for connecting the speakers to the wall plate. These have their own internal screws to the rear which are not on show. The 32 banana plugs are simple to connect 8 runs of speaker cable between the MWP to av receiver

The other options which you might be using are four wall plates for the surrounds which will have 8 plugs, you will also have another 8 internal screw connections to the MWP. This will then have another 16 screw points before you can even think about connecting each of the 8 runs of cable from the MWP to the av receiver.

Also remember that each banana plus have its own screws to hold the wires in place meaning that you have an awful lot of joins which will reduce the quality unless you can solder then all plus if you get one or two of those cable crossed over, you will have speakers which will be out of phase if not labelled correctly. This will cause you a real headache when running the room eq system

So, I'd recommend what @ufo550 said and try not to make running cables a real headache by using a storm guard brush letterbox (hidden behind where the av receiver) with single runs of cable from each speaker to av receiver. That would give you 16 in place of using 32 or even 48 banana plugs at worst depending upon which way you go. Sorry if that seemed complicated
AV Online are proud Sponsors of AVForums,
We're still delivering - more information available here​
D

Thanks for the details. I know joins aren't ideal, but I didn't think I would have a choice. And that it was good practice to terminate them like this?

So 3 wires to side/rear speakers, and 2 wires to ceiling speakers.
This works well, if wiring in for side & rear speakers, then only using the side speakers for now, as the others would be neatly terminated in the wall.

Are you suggesting. Just to run the cable directly from the AVR to the speaker (via a wall opening with a brush guard, like I do for HDMI to the back of the TV)

Due to the constraints of the extension I'm having (can't move in for 2 months due to floor drying) ill have to fit the speakers in the ceiling first, wait to move in. Hook up existing kit. Then buy the AVR that supports 4 ceiling speakers in the new year. If i had a brush guard, I would have loose wires hanging out, or in the wall.

I read a few other posts, like this, and most seem happy with wall plates.

Speaker wallplate vs direct cable from speaker to amp?

I see a lot of people implementing speaker wall plates in their home cinema installs. I didnt use them in mine, but ran cables directly from the speaker to the Amp without interruption. In my opinion it should be better this way, right? I know it doesent look as good, but then again I do not...

@DarkConvict - I'm doing a similar thing to you right now and came in with the same thoughts around wanting to use speaker AV plates and wall plates etc... What products and approach did you take in the end? I'd be curious to hear.

I installed my ATMOS and surround speakers last week and I put a wall plate in behind my AVR. I wired the other end of the cable directly in to the speakers.

What Cat5E cable and wall plate to extend VM connection

Ceiling system for background music to be played back from a PC.