Help setting up my consoles/tv/all-in-one

Hi, I need help setting up my collection of devices. At the moment I have only managed to get my TV and PS3 working with the surround system, but I'd like to get the rest using it too if possible. So without further ado, here is my setup:

My Wharfedale TV has 2 scart sockets, 2 hdmi sockets, 1 sub output and 9 component sockets (sorry, not sure what they are called!).

The Xbox is an elite model.

Connecting the Wii to the surround sound isn't a priority, but I'd really like the Xbox, PS3 and TV to use the system in as high quality as possible, with as little switching over of wires as possible. I'll happily buy any splitters/switches/wires required to get this setup working.

Thanks for any guidance you can give and apologies for being such a newb at this! <3
S

There are several different ways you can connect this up, but this is my recommended way focused on getting the best picture quality possible from all your devices to the TV.

The Wii is supplied with a standard "composite" cable which has 3 phono plugs on the end of it - one for video (yellow), and another two for audio (red,white). This is one of the poorest quality connections you can use for any form of A/V equipment. So I recommend you buy an upgrade video cable for the Wii. One upgrade cable type is called a "component" cable. This uses phono plugs like the "composite cable", but has 5 in total. Again, two of them are for audio (red, white) but there are three for the video signal (red, green, blue). You can buy the official one or get a 3rd party one which does the same job for less:

Obviously, you'd also need to buy a separate optical switcher for that setup. There's a manual one which is the cheapest option, but there are others available which are supposed to auto-switch.

The scart cable isn't the best connection available on the Panasonic, but due to the limted HDMI inputs on the TV I'd use them for the xbox/PS3. You could opt to buy a HDMI switcher as well, but I'm not sure it's worth it as the PS3 may be a better DVD player anyway.

Also, this setup assumes that your TV has an analogue audio output. I expect it will after you said it has "9 component sockets". These will be a pair it will be a pair of red & white plugs on their own. If it does have a dedicated audio output, you can connect this to the AUX input instead of the Wii. This in turn would feed audio through from the Wii to your sound system.

Thanks so much, that's a great help. I notice there is no digital optical port on the Xbox 360. I have a component HD cable which has a port to plug in an optical cable, which looks like this: 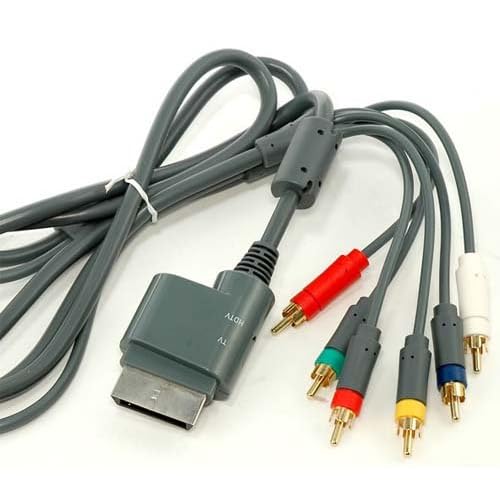 Do you know if it's ok to just use this for it's optical port and leave the other cables unplugged? (as I'll be using hdmi for connection to the TV)

Thanks again, I really appreciate your time
D

http://www.avforums.com/forums/xbox-360/982786-hdmi-optical-out.html
PSN: defbref
Destiny Clan: Babooshka Raiders
You must log in or register to reply here.

J
How can I upgrade my system?