thanks for any help you can provide.
This is a Christmas gift for my wife.
she LIVES for music.
she currently uses an old bose system connected to an old iPod.
she also streams from her phone to a Bluetooth speaker.
she says she misses the clarity of her CD's.
she would be happy with a quality CD player.
I'm thinking should i go for FLAC type files instead?
she is not tech savvy and prefers easy to use solution's.
I also have an old Yamaha receiver I'm not currently using i
could incorporate into something. model RX-V475.

I'm not sure i fully understand what's needed for FLAC files.

Flac is a type of file, it's basically cds ripped to flac, played with a computer or player and decoded back to music.

You need nice speakers to go with the Yamaha . Monitor Audio Bronze or Silver if you are feeling generous. Then you need to get your music into the Yamaha. The DAC in the Yamaha is good enough ..and will be a revelation after the Bose. The V475 is a better machine than my V440
The problem now is getting music in a digital form suitable for the coaxial cable or optical fibre input on the Yamaha. The options are.
1. Any DVD / Blu-ray or CD player preferably with a display to identify the track. The quality does not matter much because the DAC in the receiver is doing the heavy lifting.
2. Any network node device ..even maybe a bluray player.. the options are so wide here that you need to start reading the streaming threads.
3. The Chromcast Audio or CCA which used with a tablet is a real budget way of getting very high quality.

ive been trying to educate myself on this since posting.
its seems like if i buy a CD player to go with the Yamaha receiver and say 2 bookshelf speakers and a sub i will be in good shape. not so concerned with budget if we are talking 1-2k
sound good? do i need a CCA if it connects to the network?

There are a good few bargains to be had at Richer Sounds clearance at the moment.

For a modern amp with everything she needs, (including Airplay 2 and subwoofer outputs).

And near half price serious speakers.

And you could add this to keep it all pretty (and impressive).

You say 1-2 grand, but you wife likes it simpler setup wise. Why not look at a good all in one streaming amplifier, nice speakers and hook up to tidal hifi for 20 a month. Tidal gives at least cd quality, all the music anyone would want and the quality is there. You could definitely have a fantastic system for a little over a grand, you could add a cd player for a few hundred. Just another option
Everything is a lie, except the truth
Marantz PM6006,Sony str-da2400es, q acoustis 2020i, ,Mackie MR6 Mk3s,jbl lsr305s, Sony bluray players, cambridge audio azur 640 cd,Chromecast audios, Raumfeld/Teufal connectors, AKG 550s, Nikon dslrs and lenses (also sigma/tamron)
D

stimpy774 said:
ive been trying to educate myself on this since posting.
its seems like if i buy a CD player to go with the Yamaha receiver and say 2 bookshelf speakers and a sub i will be in good shape. not so concerned with budget if we are talking 1-2k
sound good? do i need a CCA if it connects to the network?
Click to expand...

Your V475 is a later model than my v440 and has a wired network so very likely you will not need a CCA.. but the entire world of streaming is very wide and there are multiple options . All I can say is that the arrangement I have is extremely flexible and allows me listen to internet radio from anywhere, play youtunes , and anything from my computer .

CD players are an odd entity now. There is two schools of thought. The basic low cost CD player is dead ,but there are plenty of very fancy audiophile class CD ones with very nice metal panels and displays. The smart money has moved to Blu-ray players which are downward compatible to CDs and maybe SACDs (Sonys). There is a certain simplicity in pressing a button and inserting a disk, which streaming misses.
But the majority of mid price players either omit a display or even analogue outputs ..only the very cheap and very expensive DVD players have both. The key point is that the V475 has a good DAC in it ,and even an audiophile level CD player will not be much, if any ,better in the DAC department
If spending 1.5k, I would think of spending 1000 on floor standing speakers and no woofer..They would be a 30 year investment. Just read pauls contribution and those MA100, would be a great buy. The MA 200s are even nicer ,but much pricier
Sony dz260 sound, Sony s490 Blu-ray , LG 55 b8 oled TV, chromecast, eirbox,
Kitchen yamaha Rx v440 tannoy Mercury m2, Chromecast audio, Samsung 32 inch series 3 Manhattan plaza T2 terrestrial hd box, Sony nwa35 + nwa45
Den: i5 , 24gb ram, maplin pro 7 DAC ADC 192k24bit, Sony MDR 1R, MA MR2 speakers ,HK AVR 340
.

Why don't you go for a nice simple all in one solution like a Naim Mu so QB or similar - even a Sonos Play 5.

You can connect a NAS drive with FLAC files (her CD collection) which would be a pretty simple case of ripping the CD's to the NAS. Controlling them can be simply done by a phone which would be no different to her using her current ipod really.

At the moment the powernode 2i is going relatively inexpensive at richer sounds. Pair that with some matching speakers and you get the looks as well as the sound
Everything is a lie, except the truth
Marantz PM6006,Sony str-da2400es, q acoustis 2020i, ,Mackie MR6 Mk3s,jbl lsr305s, Sony bluray players, cambridge audio azur 640 cd,Chromecast audios, Raumfeld/Teufal connectors, AKG 550s, Nikon dslrs and lenses (also sigma/tamron)
M

If I was buying a Christmas present for my wife then style and simplicity would be major factors alongside sound quality. That means building something around an AV receiver would definitely be out in favour of all-in-ones or minimalist separates. I would also favour a streaming solution rather than accommodating CDs but you could consider ripping your wife's CDs to FLACs and storing on a NAS as a longer term project. Of course you would have to factor in the subscription costs of a streaming service. I find Spotify at £10 per month is excellent but you could also trial the others such as Qobuz, Tidal and Amazon to see whether the higher Res options are worth the extra expense.

Depending on your budget you could consider a range of hardware options as others have highlighted. The Naim Muso QB or more expensive Muso are excellent one box units worth considering if space is a premium. Otherwise I would agree with @muljao that the Bluesound Powernode 2i + speakers is a very attractive option that ticks all the boxes. This would sound better than the Naims for a only a little extra outlay since many dealers are offering good package deals . At the top end of your budget the new KEF LS50W is unbeatable as a very discrete quality system and well worth a demo.
Last edited: Oct 17, 2020

Marantz do a very nice CD and streamer in one box the ND8006. I don't use streaming services so I'll not comment on that. There are some very good CD players from both Denon and Marantz that won't break the bank and are worth investigating.

For budget I believe you are US based.
'My opinions expressed here do not represent those of the AVForums or its associated websites'.

Keep it simple and compact. A Marantz MCR-612 (also known as Melody X) + Monitor Audio Bronze 100 or Dali Oberon 1 speakers, will provide everything you are looking for and sound very nice. If you would prefer the extra scale floorstanders can bring, the Dali Oberon 5, Monitor Audio Bronze 200 or Fyne Audio F302 are all good options.
1. Project The Classic/Ortofon 2M Silver * Bluesound Node 2i * Marantz CD6007 * Marantz PM6007 * KEF LS50 Meta
2. Bluesound PowerNode 2i * Dali Spektor 2
H

For simplicity would an active speaker/source set up be suitable, maybe something like: 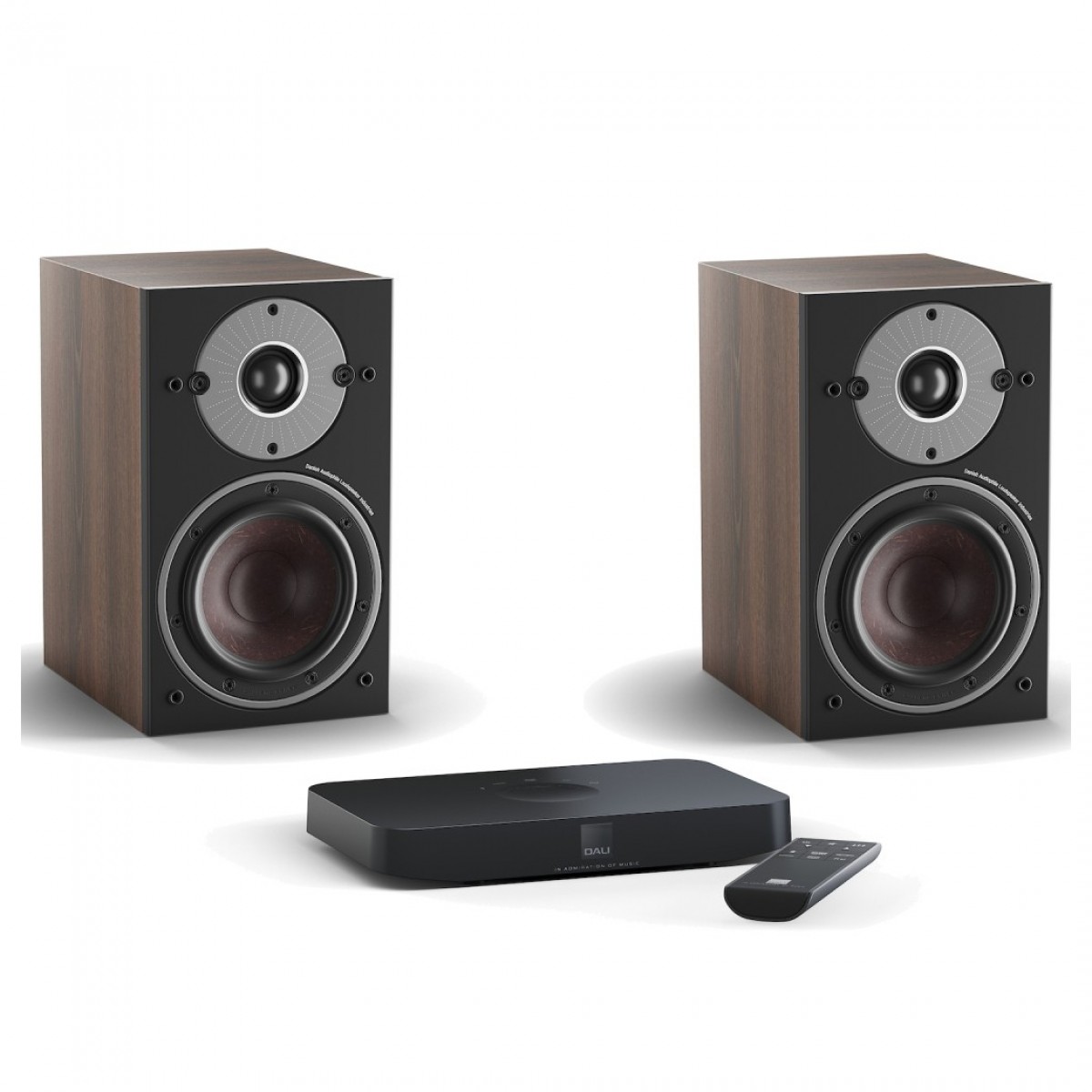 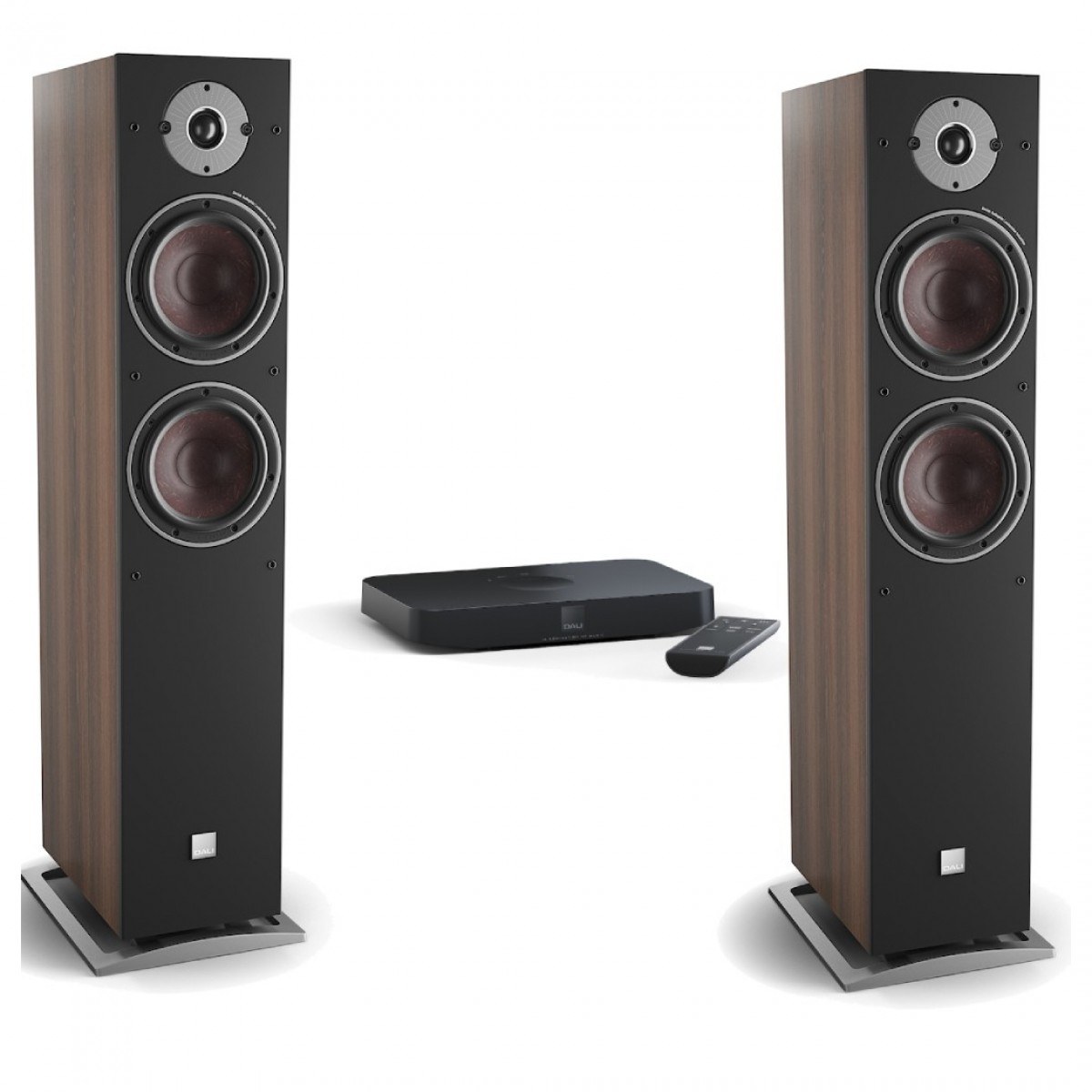 leaving some budget for a cd player and/or network drive for streaming flac files.
I can't comment on the sound quality of these as I've no experience of them, but pretty simple and have a range of finishes to satisfy the wife!
Main - Arcam FMJ AV950(movies/PS4), Anthem STR pre (music), Quad Z3 fronts, Kef iQ6C, Kef iQ3 rears, Kef Q400b sub, MEDX600X3D, PS4, Panasonic TX50HX580B, Bryston 4B3 (for the Quads), Emotiva A500 (for the Kefs), Cocktail Audio X45, Icon Audio BA3, Roon on NUC.

An all-in-one system capable of driving some decent budget speakers is just the job really. With that sort of budget you can get something really tidy that'll do just about anything but the dishes.
AV: LG 65CX OLED-Marantz SR5010-Panasonic UB900-Focal 726v 5.1
HiFi: Arcam A38-Arcam CD82T-Teufel Connector-Focal 726v
Desktop: Hifiman Sundara-RME ADI-2 DAC fs
2000/600 Fiber​
You must log in or register to reply here.

New equipment and the wife factor