Polish studio Techland has officially announced its next project, Hellraid.

It's described as a "first-person co-op slasher" featuring a single-player campaign and a co-operative multiplayer component that "pits four players against the denizens of hell - and each other - in a battle for points, rewards and fame".
Click to expand...

It's easy to take one glance at Hellraid and say something blasé like, &#8216;Oh it's just Dead Island but in a fantasy world.'

The concept started as a weapon mod for Techland's island-hopping adventure. It chucked a range of fantasy weapons and sorcery into the mix, but it didn't take long for the Polish studio to realise the idea had legs and sure enough, Hellraid began life as a standalone game.

Revealed in April, Hellraid takes the savage combat of the Dead Island series and condenses it into a focused, level-based experience where dungeons, catacombs, keeps and dank swamps are the order of the day.

Where Dead Island exists as a tongue-in-cheek b-movie romp full of rappers, parody stereotypes and bright vistas, Hellraid bears a comparatively sobering tone. It's heart lies in dark, brutal worlds teeming with demonic monstrosities, all inspired by the forefathers of the dungeon crawler genre.

Diablo, Hexen and Heretic are all names that popped up during my interview with Hellraid's producer Marcin Kruczkiewicz, and he explained that these iconic titles have driven the team to create something in tribute to the experiences that have inspired them over the years.

As such, Hellraid will offer up to four players the chance to explore fantasy stages brimming with loot, hidden chests and other trinkets waiting to be gathered for points and leaderboard dominance. It's both collaborative and competitive as heroes chase spoils and slay creatures before their mates get to them.

However, just like pen and paper role-playing games, Hellraid uses on a Game Master system. Except here it randomises object and enemy placement to create different experiences each time you enter a dungeon or tomb. You will be free to re-enter completed stages with your warrior, either before or after finishing the game, to level up some more and help out your low-level allies.

Kruczkiewicz explained how player progression and replay value will be boosted by the Game Master system. &#8220;It provides players with new experiences when they re-enter a level to complete sidequests or replay a mission in co-op,&#8221; he said.

&#8220;We believe it will give our game almost infinite replayability as Game Master spawns different sets and types of enemies, places loot and treasures on the map as well as generates random competitive challenges when playing with friends. We would want it to be able to change placement of objectives in replayed missions too but that's in a very early stage of development and we're not sure if it will make it into the final game.&#8221;

Just like any good co-op RPG experience, character classes will each come with unique skills that can be levelled up as players progress. In true homage to the genre, you might recognise the familiar Warrior class who deals in melee blows, the magic-hurling skills of the Mage, the Rogue's ranged strikes and the healing and shielding properties of the Paladin.

Interestingly, these characters can be carried on and levelled up after a player completes Hellraid, leaving them free to attempting stages that have been remixed by the Game Master system. The mechanic will ensure that no two playthroughs are the same, and in similar fashion to Valve's Left 4 Dead series, should make co-op sessions much sweeter as a result.

&#8220;Character development in Hellraid won't be stripped down [compared to Dead Island],&#8221; Kruczkiewicz said of the game's levelling options. &#8220;We want to give players even more options. Each of four character classes available in our game will have their own skill tree with passive and active skills designed especially for them, so playing with different characters really feels different and unique.

&#8220;During the game players will gain experience from killing monsters, team plays in co-op, completing quests and challenges posed by our Game Master system. Additional XP rewards will be granted for winning a mission in co-operation where each player's actions are scored with points.&#8221;

It might be a while before we can try Hellraid for ourselves, as Techland is still deciding on either a physical or digital release, although Kruczkiewicz told me the studio is targeting both. There's also no launch window and while the team has no plans for a next-gen version, he added that a port on new hardware is entirely possible. Either way, we'll be sure to report on the game as it progresses.

When I look at Hellraid I don't see Dead Island in Skyrim's clothing. Instead, I see a dark, 3D take on Gauntlet which, as a retro enthusiast, got me quite interested when I first laid eyes on it. It seems to be a simple dungeon crawler with a fun co-op dynamic, tons of violent combat and plenty of shiny coins for obsessive looters to hoover up.
Click to expand...

What the hell is Hellraid? Techland speaks | VG247
films ive seen at the cinema this year

this looks right up my street.

Techland announced today that its upcoming game, Hellraid, will be released digitally in 2014. The game was originally slated for a 2013 release, however the team is currently hard at work adding new features and game modes for both single-player and co-op. As a result of that, the title will miss its initial release date and will be coming on X360, PS3 and PC next year.

“Since we started developing Hellraid we have had a clear goal to create a game that we all would love to play. We wanted to pay tribute to the best aspects of classic titles we grew up on and enhance them with new ideas, modern technology and extensive co-op that would provide players with dozens or even hundreds of hours of pure and bloody fun.

If we released our game this year we would have to make too many compromises and the final product probably wouldn’t meet all our promises and players’ expectations.”

The decision to release Hellraid in 2014 was made in order to implement new ideas and redesign those parts of the game that fans didn’t like while playtesting the game.


“For example we want to redesign the magic system to make it even more powerful and diverse, add new ways of casting spells and a set of new, more visually stunning spells.”

As the press release reads, the team wants to use this additional time also to add new gameplay features and game modes which should make the game even more entertaining for both single player and 4-player co-op.

Hellraid aims to offer a story-driven campaign of hack & slash action and unique, competitive co-op multiplayer that pits four players against the armies of hell – and each other – in a battle for points, rewards and fame.​
Click to expand...

Hellraid developer Techland has re-announced its fantasy dungeon crawler for PC, PS4 and Xbox One, along with a new gallery of screens. 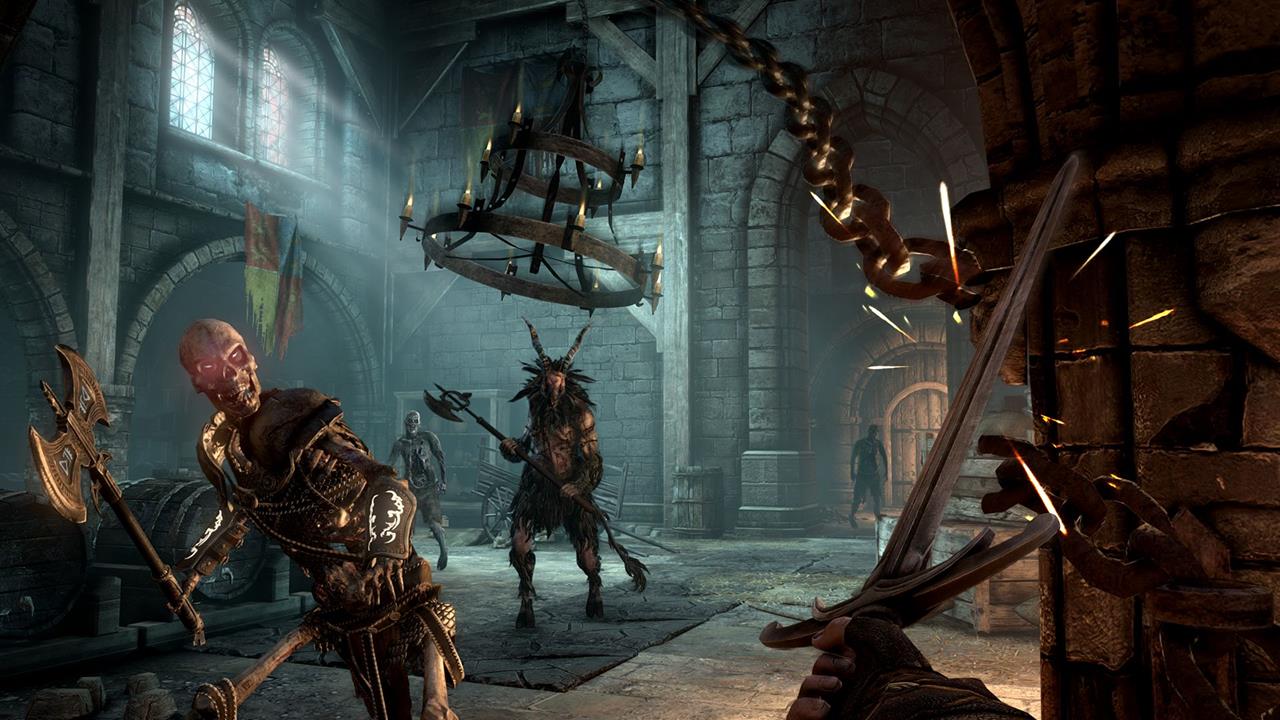 We’ve also just gone live with our new Hellraid interview with the game’s producer Marcin Kruczkiewicz. Hit the link to see just how far the game has been re-worked since we last spoke with him last July.

Although previously announced for PS3 and Xbox 360, the game is now coming to PS4 and Xbox One, with a planned Steam Early Access phase planned for PC players this Autumn.

There’s more new details in our interview above, and you can also check out our screen gallery below.

films ive seen at the cinema this year
You must log in or register to reply here.

PS5 games that weren't announced at the PS5 event