Looking to get a soundbar to connect to our projector but our projector only has a normal hdmi input port and most of the soundbars im looking at have a hdmi arc port. Could i connect these 2 different hdmi ports with a normal hdmi cable and would i get any get loss in sound quality?

You will get 100% loss of sound quality

Arc/eArc are usually present on TVs and allow either in built tuner or apps to send audio to a sound bar or AV amp. They should also allow pass through of audio from say an external device such as a games console or sky.

Projectors don’t normally have arc or eArc on internal apps or tuners so won’t work in this manner.

For ARC/eARC to work, both source and sink have to have ARC-labeled HDMI ports. If not, then the HDMI port will function as a "normal" HDMI port but you won't get the Audio Return Channel because the HDMI chipset responsible for that is not there. You could use an optical cable out from the pj to the soundbar for audio and the HDMI port would be used for video.
I never trust atoms. They make up everything.

Very few home theatre projector will have an optical or any sound output on them. You would need to check the model, which one is it?
G

Thank you for all the replies.

You have to have a soundbar that has inputs and outputs.

A quick Google suggests something like this Samsung HW-A550 at £200 but double check the specs.
G

Hi,many thanks for the suggestion.
I thought that with just input ports on my projector I wouldn't be able to connect a soundbar to it as I would need an output port on my projector so the sound can be passed to the soundbar.
If that makes sense?
Also if this is possible what sort of sound would I get from using just the USB port

AVForums Sponsor
Your projector is designed to play audio back via its onboard loudspeaker - the sound it delivers will be the same no mater which Input you use.

The USB port does not look like it is two way so you cannot send audio out from the USB port.

As others have said if you wish to add external sound to the system your connectivity will be - Source(s) > Soundbar (Video+Audio) then Soundbar > Projector (Video only).

Joe Fernand said:
Your projector is designed to play audio back via its onboard loudspeaker - the sound it delivers will be the same no mater which Input you use.

The USB port does not look like it is two way so you cannot send audio out from the USB port.

As others have said if you wish to add external sound to the system your connectivity will be - Source(s) > Soundbar (Video+Audio) then Soundbar > Projector (Video only).

Hi Joe, I'm genuinely so sorry but I've been trying to get my head around what you've said but for some reason I'm struggling.
Are you saying that I could plug a soundbar into the hdmi input port on the projector? If so given the basic nature of the hdmi port on the projector wouldn't the sound that I get from the soundbar only be a basic one and not a increased quality?
If I can connect a soundbar to my projector would there be any that you could recommend please

Many thanks in advance and apologies for all the messing around

HDMI combines both audio and video into the same signal to pass down the HDMI cable.

In your case, you would go from the HDMI out on the source (e.g. Sky box, Xbox, Blu Ray Player, Media player) using an HDMI cable into an HDMI input on the Soundbar.

The soundbar will then decode the sound from the format it is sent in Dolby Digital, Dolby Atmos, DTS (assuming the soundbar supports them).

The Video will then be sent via a second HDMI cable from a soundbar HDMI output to the projector HDMI input whereby the projector will display the video and have no impact on the audio.

Your projector is 1080P and not 4K so you don't need a soundbar that has explicit support for 4K just one that has at least one HDMI input and one HDMI output. The one said earlier had this.

Most people would normally use an AV Receiver with a projector so they can have multiple devices plugged into the receiver and use it as a switch before sending the video onto the projector. 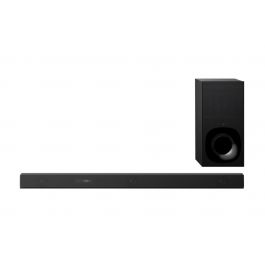 AVForums Sponsor
@Giraffe76 as ChuckMountain says when you connect Source > Soundbar > Display (your Projector) the Display device has no impact on the audio reaching the Soundbar.

You can spend anywhere from £150 to a few thousand on a Soundbar depending on number of HDMI Inputs, Audio formats you wish to support (2.0, 5.1, 7.1, Atmos etc), size and layout of your room, mounting options, no sub, wireless Sub or Wired Sub, wired surrounds... so many variables.

Combining a Soundbar rather than an AVR + Loudspeakers with a projector means you have to plan carefully around the positioning of the Soundbar so that is not too low on your wall or forces your image to be too high on your wall!

There is a separate Forum here on AVF for Soundbars plus there are plenty of Reviews on AVF on a wide range of Soundbars.

Discussions about soundbars, soundplates and soundbases

Home AV Reviews from the editorial team at AVForums

Hi guys, thank you so much for the clarification. Something that I didn't say which I should of mentioned is that we use a firestick as the source as we do alot of streaming (Netflix Amazon prime etc)&we have the projector on a unit above the head of where my wife sits at the back of the room so was going to put the soundbar above the projector.
Thanks for all the information&looks like I have reading to do

AVForums Sponsor
The Soundbar has to be at the front of the room, positioned at your seated ear height and aiming back at the viewer.

oh dear in that case the hdmi cable will need to be about 12 feet long.
do they come in that length?
Are soundbars ever placed at the back of the room?

AVForums Sponsor
They do! You can go out to 100m if you go with a fibre HDMI cable.

No sound source (loudspeaker) is ever placed at the rear of the room unless it is a rear or surround channel in a 5.1/7.1 system which also has front Left, Centre and Right loudspeakers.

I agree with Joe. The front sound stage is the most important. RF, C, LF is where the action is, with 90% of the voice coming from the center channel. The sides (in 5.1) or the backs (in 7.1), as well as the ceiling speakers for Atmos are for atmosphere only.
I never trust atoms. They make up everything.
G

Thanks for all of your replies help and advice. To be honest i think we will just stick with what we have. Sorry to of wasted your time

Giraffe76 said:
Thanks for all of your replies help and advice. To be honest i think we will just stick with what we have. Sorry to of wasted your time
Click to expand...

If you have questions, then it's not a waste of time. That's how we learn.
I never trust atoms. They make up everything.
You must log in or register to reply here.

Can a Hdmi splitter seperate sound for 4K TV and 1080P soundbar for 4K console?

Samsung Q70R - Why are VRR and ARC on two separate HDMI ports?