Haunted NAS Drives keep "disappearing" after a while of being visible?!

I've been doing IT, mostly hardware, on Windows, Android (Chrome) OS and Mac OS S/MB and "elaborate" Home networks for 39 years and this issue is blowing my mind. I've never seen anything like this before. At my home network, which is moderately elaborate with a lot of Media (audio and video) to a fairly fancy "home theater" and 8 PC's, Chromebooks and a couple Tablets. Not all the PC's or Chromebooks are on all the time. I have two full time running "off the shelf" NAS'es on the W/LAN. One is a 2TB LG NAS (with one spare backup) run like Atomic Clocks, I never have any issues, always visible to everything on my Net. Then I have two Toshiba 2TB "CanvioNAS" drives. One is the primary and the other mirrored but (powered) off 99% of the time, except for backups once a week. The 2nd one is essentially new when it comes to accumulated run time, first one is about 5 years old, but 80% of the time it's on low-power standby ... it's always been a slow but reliable NAS. Toshiba hasn't supported it for about 3 years now, abruptly pulling out of the NAS sector.

Problem:
Suddenly about a month ago I was getting indications that "Toshiba 1" was maybe getting near life end, acting spastic, especially slow, and then disappearing from all the "computing devices" on the network as "shares", BUT you could still access the HTML administration built into the drive from any PC or Android browser! I'd shut it down, repower and it was visible again .... for a while (2 to 12 hours) and then nothing would "see" it except the W/Router and any Browser to access the HTML Admin page! Now I can't reboot or shutdown from the HTML Admin page either.

So, I powered up "Toshiba 2", keep in mind that while it's 5+ years old too, it's rarely on, it's like a 1967 Mustang with a 500 miles instead of what you'd expect for its age. It's doing the same damn thing!! "Toshiba 2" will let me run a Bad Block Check and a File System check which Toshiba 1 will no longer do. It's confounding that the two same brand NAS device, vastly different in age by run time are acting the same suddenly in that they both "disappear" from ANY computing device with access on my network, all at the same time. I've never seen this happen before.

Note that I have deleted both Toshiba NAS profiles on the Linksys /Cisco Wireless Router (a recent N/AC model) while both were powered down and then powered them up and the router identified them correctly and added them as shared devices with fixed IP addresses. I used 10.0.1.155 and .165 as fixed address.

Any thoughts and help? I'm trying to save Toshiba 2, it really shouldn't be doing this. I know the older in hours of running time is dying, not trying to save it.
M

Might be some "Master Browser" nastiness. Maybe the master browser has changed and whatever is currently running it isn't working too well.
I

mickevh said:
Might be some "Master Browser" nastiness. Maybe the master browser has changed and whatever is currently running it isn't working too well.
Click to expand...

Except that it would not explain why the LG NAS on the same router remains visible; that this ALSO occurs when none of the Windows PC are booted up and only Chromebooks and Android Tablets on "on the network", saw the Toshiba NAS and then later the NAS "disappears" with browser (ala Firefox, Chrome, Edge, etc) still having access.) Also, why would a Master Browser issue also include a different second Toshiba NAS that has been booted in a month.

I agree though that it is isolated to the Toshiba NAS devices that have each their own embedded Microprocessors and OS Firmware with Samba, Windows and Mac protocols. They don't "need" a computer to function as they have "Cloud" access functions.

There is the possibility security vulnerabilities in these old NAS have been exploited by something, it would explain why both are affected. NAS and linux are not immune, my QNAP receives regular security patch notes in its firmware update log.

If Toshiba does nothing funky and just formatted in EXT3 I would remove the drive and plug it into a USB dock then copy the data off using Ubuntu or Linux Mint on a PC. Don't write anything to the drive or make any alterations to the file system if you want to plug it back into the Toshiba.

That way you at least have the data safe and can erase the Toshiba's if it comes to that.

Can you enable FTP access on the Toshiba NAS ?, can could try accessing the data that way.
I

next010 said:
There is the possibility security vulnerabilities in these old NAS have been exploited by something, it would explain why both are affected. NAS and linux are not immune, my QNAP receives regular security patch notes in its firmware update log.

Can you enable FTP access on the Toshiba NAS ?, can could try accessing the data that way.
Click to expand...

Thanks for you input and reply, this is a confounding problem, always looking for solutions I have not thought of.

I'm nearly certain it's not a Security issue, my NAS are behind a triple layer router system, always has been and there is only access from inside the closed network. FIrewalls are always up and checked, I have to do this for my commercial S/MB clients too, so I practice the same checks on my own Net.

Everything on the NAS has been copied off and I've run a few Malware checks on the data down to root and nothing it there in the data. Since the OS on the Toshiba NAS is firmware, I doubt it's infected. That's not saying that the firmware isn't malfunctioning.

As I reported in the OP. when this "younger" (run tine wise) Toshiba NAS is booted up from cold, it's runs fine ...... for a while, anything from 2 to 12 hours, and then it suddenly becomes inaccessible (Error Code 0x80070035 the Network Path Was Not Found) or "not visible", as a Share on the Net via SMB/CIFS.

So you'd think something is happening between the NAS and the Router that is it's host that the Address is "lost" maybe by the Router to the Net devices (computers, Chromebooks or Android Tablets) looking to use it as a SMB/CIFS Share ........ HOWEVER, it is still accessible using HTTP and the assigned IP address to open the Firmware Administration page with any Browser built into the NAS. I've run Bad Block Checks and File Checks several times, it found nothing.

I think this would stump a IT Sherlock Holmes, nothing leads to a single solution.
A

Well, I was going to suggest that maybe these old NAS devices were running SMB1 protocol and your window (10?) box needed that enabled as that has been shut off in current versions/updates. However you mentioned problems with the web interface, and other devices having issue. Still it might be worth a look. 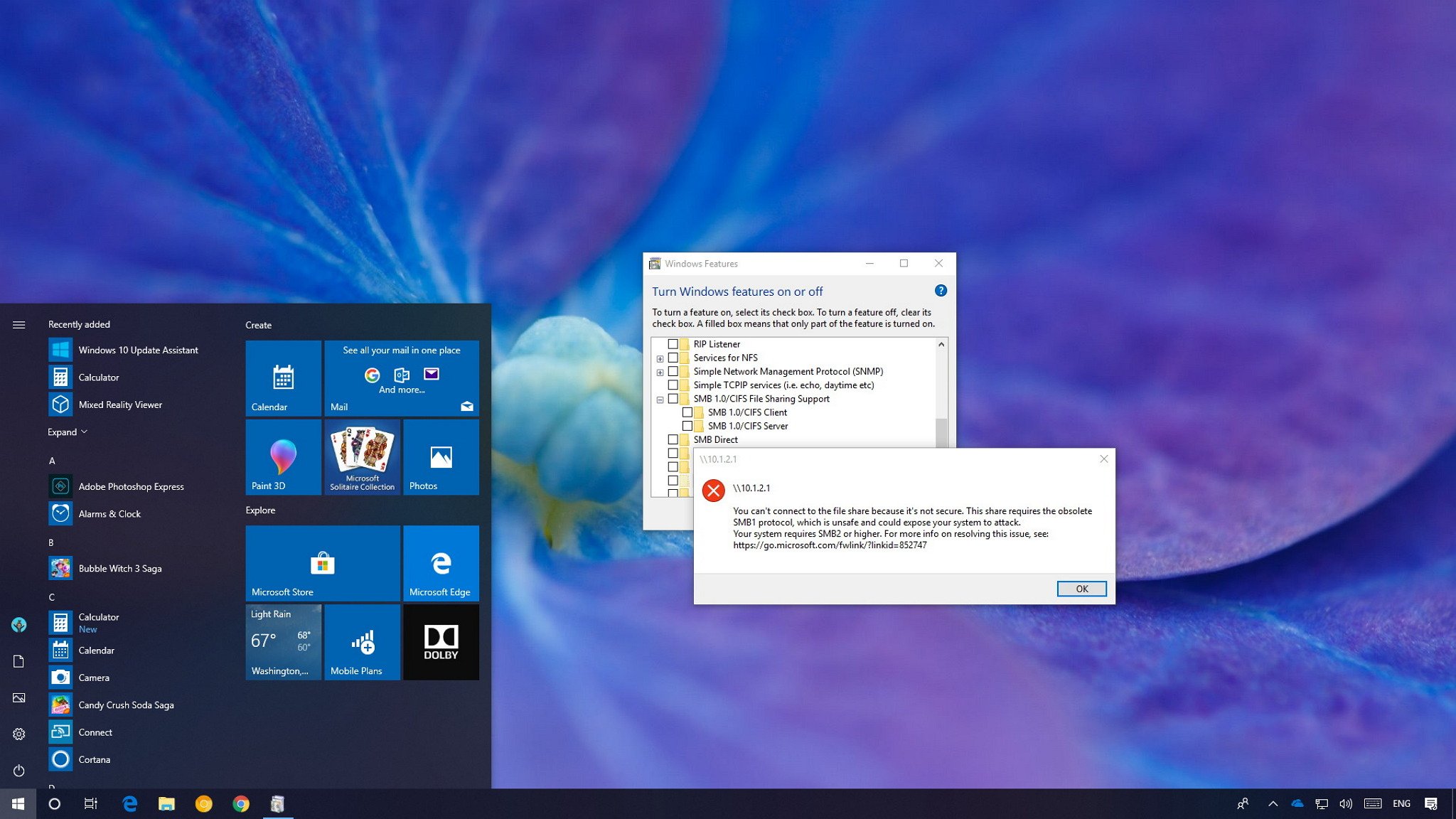 In this guide, we show you the steps to regain access to your network files when connecting to a device that is still using the SMB version 1 protocol.

ajohnson30 said:
Well, I was going to suggest that maybe these old NAS devices were running SMB1 protocol and your window (10?) box needed that enabled as that has been shut off in current versions/updates. However you mentioned problems with the web interface, and other devices having issue. Still it might be worth a look.

In this guide, we show you the steps to regain access to your network files when connecting to a device that is still using the SMB version 1 protocol.

Doesn't make sense that it's SMB and Windows 10, as this also happens with Windows 7 PC's (2) of them and all Android OS devices (Chrome OS and Android OS 5.0 to 10.2 Tablets and SmartPhones.)

Nope, the devices attempting to connect or stay connected isn't the problem because of the invalidity of the above statement. It has to be something in each of the 2 same brand but vastly different aged (time of use) NAS devices with built-in SMB/CIFS/DAVE/etc protocols, or the Router .... or both. Keep in mind there is a 3rd NAS of a different brand (LG, older than the Toshiba's in age of mfr and time use) that is completely unaffected on the same router.
You must log in or register to reply here.

Recommend me a NAS