Warner Bros. and DC are putting a lot of faith in the release of Suicide Squad later this year—apparently to the point that it’s breaking out Margot Robbie’s Harley Quinn to star in her own movie.

are they not content with upcoming Wonder Woman film

Robbie will not just reprise her role as Harley, but produce the film—and most interestingly, the film won’t really just star Harley Quinn. Instead, the site claims the film will actually revolve around several female heroes and villains from DC’s vast comics pantheon: names like Batgirl and the Birds of Prey (a team of female heroes that typically consists of Black Canary, Huntress, and Barbara Gordon, and has featured multiple other female heroes over the years) are being bandied about.

There’s little more known about the film so far, except for the fact that the undisclosed scriptwriter is female, and that Robbie pushed for the film to happen, having fallen in love with Harley and DC’s female characters while researching the comics for her Suicide Squad role.

My god she is so ridiculously hot...
PS3 Gamertag: ianhutchaus
XBox360 Gamertag: hutch

With me, I shut my eyes and think the wifes HQ

Fine. Harley was pretty much the only salvageable aspect of the unholy ****-sandwich that was Suicide Squad, so she's the best choice for a spin-off.
2020 in film , A24 Films seen

I guess it makes financial sense as HQ was pretty well received from SS although I enjoyed Joker and Amanda Waller more. A pure HQ film in the vein of Deadpool probably wouldn't be as great, I can see it feeling forced but a movie to flesh out Batgirl, Black Canary etc makes total sense and helps DC expand their CU
Predator is the greatest movie of all time

It will be better than Halle Berry's Catwoman.
"You break my record, now I break you, like I break your friend."

So it'll be called Harley but really it'll have a wider range of characters in with heroines as well as villains.
Predator is the greatest movie of all time

Suicide Squad director David Ayer will be working alongside Margot Robbie again as he helms a Gotham City Sirens movie, which will see Harley Quinn teaming up with other "top female villains" from the DC universe. Along with reprising Harley, Robbie is also executive producing. Geneva Robertson-Dworet is tackling the screenplay, while Geoff Johns and Jon Berg will also be producing. For all the non-comic book fans out there, Gotham City Sirens was a series that saw Harley adventuring with Catwoman and Poison Ivy, meaning that their inclusion in the movie is likely, though not confirmed at this time.

Will Smith expressed his willingness to join Robbie;

“I’d definitely love to be in it. I love Margot Robbie, I would do, like, anything she wants to do.”-
Click to expand...

raigraphixs said:
Will Smith expressed his willingness to join Robbie;
Click to expand...

Will Smith expressed his willingness to join Robbie;
“I’d definitely love to be in it. I love Margot Robbie, I would do, like, anything she wants to do.”-
Click to expand... 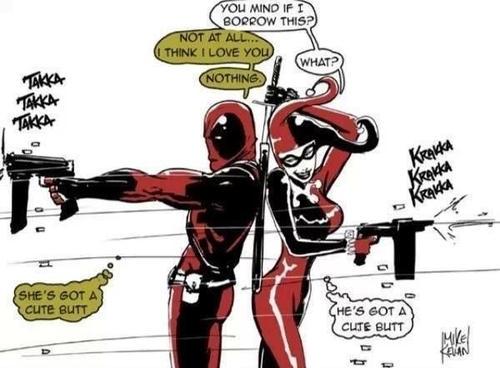 Rumored David Ayer no longer involved with this,
seems both Ayer and Synder being curtailed in DCU, since Joss Whedon joined..

raigraphixs said:
Rumored David Ayer no longer involved with this,
seems both Ayer and Synder being curtailed in DCU, since Joss Whedon joined..
Click to expand...

No in the case of Snyder it's the death of his daughter that has curtailed him.

QuestShield said:
No in the case of Snyder it's the death of his daughter that has curtailed him.
Click to expand...

We all know about the tragedy i first posted it here, it must play a part, i doubt the Synders would want to give up their positions at DC moving forward, but no reports are using the tragedy as the main reason.

“In addition, TheWrap has learned that the villain in “Birds of Prey” will be a Batman comics villain who has never before appeared on the big screen.”

Birds of Prey' Villain Revealed as Black Mask, One of Batman's Deadliest Foes 'Birds of Prey' Villain Will Be Black Mask, One of Batman's Deadliest Foes
D

Will this be any good considering WB\DC are just trying to find the next big thing without any fore thought?