Get yer Hush Boxes out

its about time I started posting in the CRT section again, No reason for me not being here just been working hard.

Has anyone else been in the cables section .
Enough said about that experience


Anyway just wanted to know the average size of yer hush boxes, and maybe some pics to with that.


Due to the fact that I seem to have the worlds LOUDEST pair of projectors above my head - Unless of course you have a pair of G90's - Then you beat me for noise.

I needed a hush box.

So today a rain forest has been levelled and my contribution to the carbon footprint added (Sorry!)

Pics to follow but its big !!!
Mad Home Cinema

Hope you have a sturdy ceiling and roof !

This is something i have always wanted to do,but never had the time,confidence or knowledge to do it.An easy step by step guide for dummies, with links to where to buy the bits would be most welcome.Anyone got time on their hands?

I have now spent 3 days working on this.


Originally I had been working on silent run fans - or along those lines.

No matter what I try its clear that Barco did a good job in the design and use fans with a very strong draw ability. This makes the job to replace them very difficult.

I have a 1209s here that PRIOR to me getting had its fans changed to the lesser B10 type (B30 is standard) and every board in that unit has been replaced now as it was clearly running over temp with its previous owner.

What I decided to do was build a Hush box, this has been going on this week and the design has changed several times so far to try and get the best isolation in the room from the fan noise.

Long story short is 80% complete and I am very happy with the reduction in noise.

Currently the extract fan system is not the cause of most noise!!! I did expect this and its in its trial setup at the mo. I hope to better the design by the end of next week - I'm waiting for some new parts to push this forward.

Nick - YES , There is still hope. I have a 1209s to install near me and that will also have a form of noise reduction box fitted so that will be a great test run for a 1209s . In fact from that a more standard 1209s specific design should be born.

The 909/Cine9 requires both front and rear silence system, the 1209s Only requires a rear system.
Mad Home Cinema

First full test of over 2 hours.

Rear hush box temps after 2+ hours 31 & 29.5 deg C .The differance is due to different airflow rates that is being worked on.

I believe the new idea for extraction will give more balanced airflow and should allow extract fan to run at a slower speed, with that will be reduced extract fan noise.

There is still the option to add silencers to the extract fan.

I should add that NO air con was running in the room at the time of this test and today has been the hottest day of the year so far.

Can't wait to hear of your results !

Tom.W said:
Can't wait to hear of your results !
Click to expand...

I cant tell a good joke either .
Mad Home Cinema

Nice to see you back Andy and I'd like some photo's too. How about some screen shots from that set up of yours as well? Haven't seen much on that front in a while.

Check out my Home Cinema thread pictures are there, more being added.

The forum software does not seem to allow me to use the same picture in two threads !!!

More work on the Hush box was done today.

Some additional items for the cooling fan system need to be ordered. Im very tired so more details will be posted once ive slept !
Mad Home Cinema

got a box round a barco 808, which almost killed the sound completely....(almost).....im well happy with the results.... an inline fan in the loft is extracting temps are about the same as with no box....
Visit my cinema here : http://www.avforums.com/forums/showthread.php?t=389799

Hey Andy! Box those guys up but make sure to cool them adequately! (But then you already knew that). 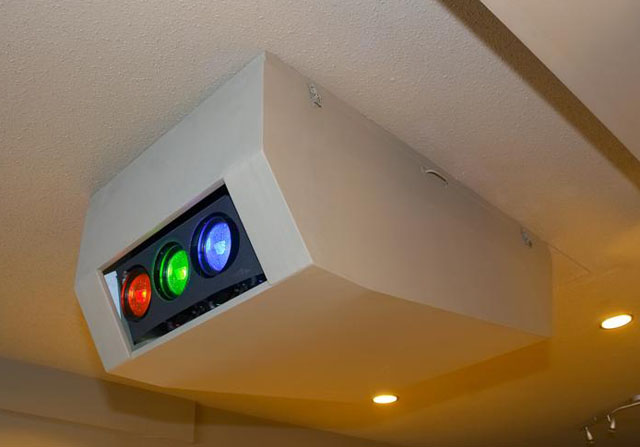 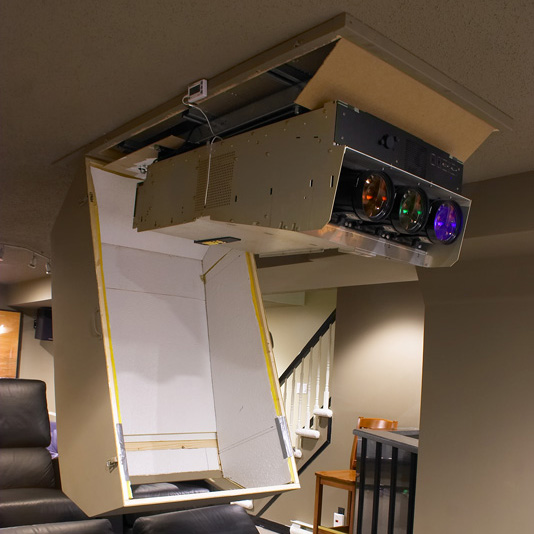 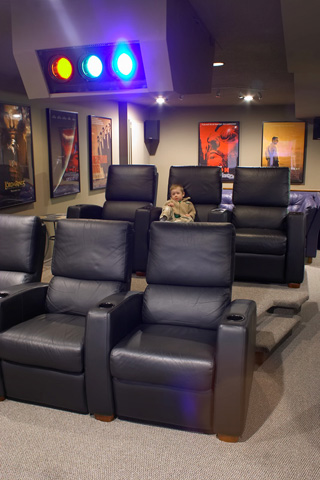 I've got more pictures and instructions on how I built it here: http://www.curtpalme.com/Hushbox1.shtm

Hey Kal - Is that you sitting in the 2nd row? - If so those chairs are huge!
Remotely illuminated.

barcoed said:
Hey Kal - Is that you sitting in the 2nd row? - If so those chairs are huge!
Click to expand...

Ha! Sort of! It's my son from a couple of years ago... so I suppose there's part of it in him.

For others you will see that Kal's Barco is out of its outter case.

This is in my opinion a great help to cooling with or without a hush box.

Good point Andy. It's only valid the later Barco models where the case itself isn't part of the airflow design. With the case removed my Cine8 still has all of the aluminum sides/tops/bottoms to help direct air flow in the proper direction: From front to back.

Because of the forced air system I use, with my hushbox closed the projector actually runs cooler than with no hushbox at all.

kalW said:
Good point Andy. It's only valid the later Barco models where the case itself isn't part of the airflow design.

Tom.W said:
I did a few measurements of my 1209s on the major heat sinks with and without the upper case and without the top cover it ran about 15-20 degrees cooler !
Click to expand...


Yes, the outter case becomes an air trap - I have always removed them.


Kal said:
Because of the forced air system I use, with my hushbox closed the projector actually runs cooler than with no hushbox at all.
Click to expand...

YES, Again this is the case here. Because I am extracting the heat from the PJ's the ambient room temp is also reduced.

And yes I too believe that the PJ is running cooler than when unboxed. Although for me I have not had long to run and test this, its still in its first week.
Mad Home Cinema
B

If you're looking to remove to outer case, think intelligently about whether it's part of the cooling air ducting system. The Barco 801 is a good example where the case funnels the air over the heat sinks.

Also fans which blow at something stand a chance of sending a directed air flow. Whereas fans which 'suck' air will do so isotropically unless there is a tube containing the inflowing air - the difference is like being able to blow a jet of air from a straw, but you can't suck a jet in.

Barcoing Mad said:
If you're looking to remove to outer case, think intelligently about whether it's part of the cooling air ducting system. The Barco 801 is a good example where the case funnels the air over the heat sinks.
Click to expand...

Quote: "Nick - YES , There is still hope. I have a 1209s to install near me and that will also have a form of noise reduction box fitted so that will be a great test run for a 1209s . In fact from that a more standard 1209s specific design should be born."

Andy: How's this one going then?

Yesterday I minor change to my design took place.

I replaced two of the access panels each side with one - This removes one possible gap for air or noise to escape.

MAkes the underside access panel very heavy but the aim is reduction of noise over anything else.


Also the ducting I have now ordered insulated version to try out and two silencers for the fan.

The Hush box works well to reduce noise but the extract fan is rather noisey - I have been running on full but will work out best flow rate at time goes on.

I also now have the wood to build a the 1209s rear hush box, So as soon as I can get the 1209s installed that will start.

First I am working on a Marquee 9500 Ultra , Currently been installed on a Chief electric winch mount, Need to setup but its looking good - Thats not mine by the way !!!
Mad Home Cinema
You must log in or register to reply here.

From Fishtank room to Cinema room