so i am sitting here on my own this evening, watching the dark knight rises and suddenly both my fire alarms go absolutely mental, both going off at a seemingly even higher pitch than normal (they probably weren't but it seemed like it).

we have 2 in the flat, one in the hall and one in the kitchen, about 20 feet from each other.
i haven't cooked anything this evening, there is no apparent fire in my flat nor any smoke or candles alight. any ideas what might have caused this?

a quick google suggests things such as dust in the sensors and dead batteries. from past experienc, when the batteries are on their way out the alarm gives off a couple of beeps every minute or so, but this time they were going off as if there was a fire but there isn't.

this happened to anyone else? i have had to take both of the alarms apart otherwise they would still be going off now. one thing i did notice, when i took the one in the hall apart it continued to make a kind of "fizzing/electrical" noise that i couldn't seem to stop.

any ideas? i don't want to leave them off and risk a fire starting and me not knowing, but i can't have them going off all night and annoying the neighbours.

If they are mains operated with a battery back-up they will be linked to each other via a link wire, meaning if one goes off then the other will sound too. Could be a faulty detector, how old are they? smoke detectors should be replaced every 10 years.
Follow my personal blog about my fight with 'Chordoma' a rare relentless bone cancer. www.blicks.org
S

it says on the unit to replace by 2018, so the unit should be ok, maybe it's just the battery

sheriffwoody said:
it says on the unit to replace by 2018, so the unit should be ok, maybe it's just the battery
Click to expand...

Could be, are they replaceable batteries as lots now have rechargeable lithium cells that last the life of the detector....
Follow my personal blog about my fight with 'Chordoma' a rare relentless bone cancer. www.blicks.org
S

Worth a change then....
Follow my personal blog about my fight with 'Chordoma' a rare relentless bone cancer. www.blicks.org

Give the sensor a good hoover out.

If they play up again, get the fire brigade out (not via the emergency number) - they are only too keen to ensure that smoke alarms are installed and working correctly.

I couldn't help but get a mental image of a spider having a crafty fag next to the smoke alarm.
Listen
A

kav said:
I couldn't help but get a mental image of a spider having a crafty fag next to the smoke alarm.
Click to expand...

Wasnt this guy was it 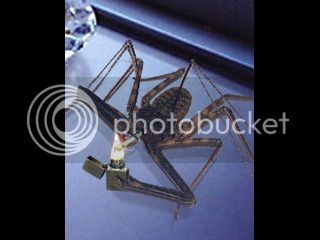 Spiders will set them off, as will dust. Open them and give a light cleaning with a hoover. Test them using the test button. Test them both not just the one. If you want to check that they are racting to smoke then light a taper and allow the smoke to enter the head.

If in doubt find out the telephone number for your local fire brigade. Ask for the fire prevention department and they may be able to organise a home check for you.
'My opinions expressed here do not represent those of the AVForums or its associated websites'.