“Outer space? Listen, I wouldn’t rule anything with this franchise. When I read submarine I’m like ‘OK, anything’s possible’. (Laughs) You never know. I haven’t read “Dom on Mars” yet but again, you just never know.”
Click to expand...

Are We Getting a Fast and Furious Outer Space Future?

Are we still losing Rodriguez, please...
IF HE DIES, HE DIES

vin is backing her fight for equality, so doubt she will be going anywhere?

raigraphixs said:
vin is backing her fight for equality, so doubt she will be going anywhere?

And no-one messes with the first multicultural megastar.™
"Because of my biiigg legs and karate, I can do the splits...NO PROBLEM!!!"

Rumour has it the delay is to try and cram a Rock/Stratham spin off in beforehand...

Drax1 said:
Rumour has it the delay is to try and cram a Rock/Stratham spin off in beforehand...
Click to expand... 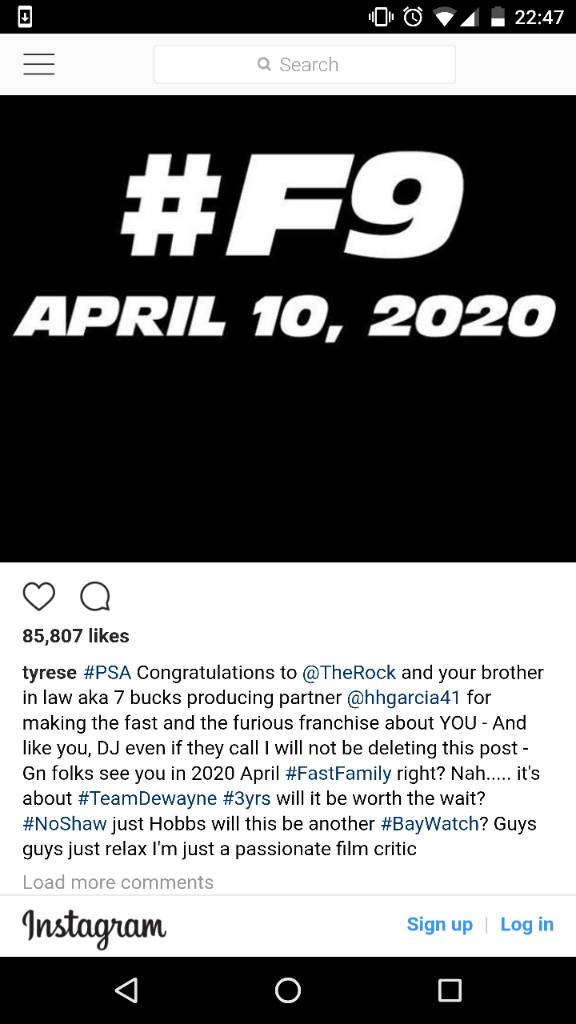 these actors will slowly kill their franchise
Last edited: Oct 5, 2017

My goal from day 1 was to come in and create an exciting/fun character for the fans, elevate the franchise and build it out.
Click to expand...

Brotherhood… and all it’s complexities. This scene was filmed in Puerto Rico, I can remember it like it was yesterday. Such a beautiful island, the people were so warm and welcoming. I turned 43 that summer… and my son Vincent was born. A woman named Jan Kelly responded to a question I had asked on Facebook, ‘who they would like to see me work with?’ She said would love to see me work with Dwayne… I listened to her request and he became Hobbs. I know there has been a lot of speculation as to why the Fast 9 release date was pushed… but it would be unfair to say it is anyone’s fault. As we plot the course to expand the Fast & Furious universe, one must be mindful to take stock of the roads we took to get here. The pillars of authenticity, family and most importantly, our loyal fan’s perspective has been instrumental in procuring success. However, like any vehicle that has run around the globe 8 times, the franchise is in need of maintenance. My good friend and the godfather of Universal, Ron Meyer has granted me the time to do just that. We have some very exciting news to share soon… stay tuned. Yours truly, Dom
Click to expand...

Vin Diesel doesn't half talk a load of twaddle.
"Because of my biiigg legs and karate, I can do the splits...NO PROBLEM!!!" raigraphixs said:
Justin Lin back in talks to direct

Bonus points for having the lovely Jordana Brewster back on board for 9 & 10.

Drax1 said:
Bonus points for having the lovely Jordana Brewster back on board for 9 & 10.
Click to expand...

No!!! She's beyond dreadful. Keep her away.

don't let the door hit you on the way out

raigraphixs said:
don't let the door hit you on the way out