Formerly known as "Legion" and based on the 2010 feature film of the same name.

20 years after evil angels descended from heaven to lay waste to the human souls they felt God had favored over them, a reluctant "savior" must arise to protect Vega, the last remaining stronghold of humanity. The savior has more to fear than just angels, as the elites of this new society conspire to gain power for themselves.
Click to expand...

Castings and info announced for the supernatural pilot, Dominion

Produced by Universal Cable Productions, the pilot is set to begin shooting this month in Cape Town, South Africa.

Based on characters from the hit theatrical film Legion (2010), Dominion is an epic Supernatural action drama set 25 years after the events of the movie and picking up in the aftermath of a catastrophic war between an army of angels and mankind that has transformed the world. The series follows the perilous journey of a rebellious young soldier who discovers hes the unlikely savior of humanity, set against a backdrop of the ultimate celestial battle as it touches down on earth.

Anthony Stewart Head plays David Weel, the power hungry president of the Senate of Vega (formerly Las Vegas) who is frequently at odds with General Rysen, the citys military leader. David is willing to do whatever he believes is right to protect the city and his position leading it.

Anthony Stewart Heads lengthy television career has encompassed iconic starring roles in worldwide hit series including Buffy the Vampire Slayer, Merlin, Little Britain, Manchild and Free Agents. Head has also guest starred on numerous series including Highlander, Doctor Who, NYPD Blue, Spooks and, most recently on Syfys Warehouse 13. His feature film roles include The Iron Lady, Percy Jackson: Sea of Monsters, Repo! The Genetic Opera and Imagine Me & You. Heads various West End stage credits include Six Degrees of Separation for the Old Vic and the London revival of The Rocky Horror Picture Show. He is represented by Donna French of Gordon & French.

Roxanne McKee plays Claire Rysen, the closest thing that Vega has to a princess. As the daughter of General Rysen  the man who led humans to victory against the angels during the Extermination War  she is a member of the highest class in Vegas stratified society. Claire is also strong-willed and much tougher than she seems.

Roxanne McKee was born in Canada but brought up in England. She completed a BA degree in Politics at the University of London before being cast from an open casting for the popular British series Hollyoaks in which she played Louise Summers. Her career since has included roles in the series Lip Service for the BBC and the feature films Ironclad: Battle for Blood and Fox's Wrong Turn 5. She is perhaps best known for playing Doreah in Game of Thrones for HBO based on the best-selling novels by George RR Martin. Roxanne will also appear in the upcoming feature, Hercules 3D. She is represented by Curtis Brown, Insight Entertainment and ICM.
Luke Allen-Gale plays William Weel, the scion of Vegas other powerful ruling family. Unlike his cunning politician father David, William is a man of the people and Head of the Church of the Savior.

Trained at The Drama Centre London, Luke Allen-Gale made his acting debut in 2008 on Wallander. Best known for his UK starring roles as Dr. Springer in Monroe and the Channel 4 miniseries The Promise, Allen-Gale recently had a recurring role in The Borgias in the US. He has guest starred on popular TV series including Ripper Street, Endeavour, Death in Paradise and Midsomer Murders. Allen-Gale was also onstage in Londons West End production of The American Plan and can be seen in the feature films Captain America and Undead Union. He is represented by Markham, Froggatt and Irwin UK.

Shivani Ghai plays Arika, a lead diplomat sent from Helena, a mysterious and militant matriarchal society in what was once Salt Lake City, which maintains a tenuous peace with Vega.

Shivani Ghai established herself in Gurinda Chadhas romantic musical Bride & Prejudice. She appeared on American television in HBOs Five Days and House of Saddam, and hit mini-series The Bible for History. On film shes also appeared in the features Cleanskin opposite Sean Bean and Everywhere and Nowhere directed by Menhaj Huda. She will star as a regular in the up and coming Ambassadors, the new Mitchell & Webb series for BBC, and had guest appearances and recurring roles on the British television series Sinchronicity, Identity and EastEnders as well as Italian televisions Un Medico in famiglia. Ghai is represented in London by agent Gavin Denton-Jones of Creative Artists Management and in Los Angeles by agent Steven Jang of SDB Partners and manager Tim Taylor of Luber Roklin.
Click to expand...

SYFY GREENLIGHTS DOMINION TO SERIES FOR 2014

NEW YORK – December 4, 2013 – The ultimate celestial battle between good and evil will descend to Earth in 2014 as Syfy officially greenlights the scripted drama Dominion (working title) to series, it was announced today by Syfy President, Dave Howe. The series is produced by Universal Cable Productions and BOLD Films, and filmed in Cape Town, South Africa.

“Following the critical success of ‘Defiance’ and the upcoming Ron Moore thriller ‘Helix,’ ‘Dominion’ will be the next major addition to Syfy’s growing slate of high quality scripted series,” said Howe in making the announcement. ”‘Dominion’ will continue Syfy’s new strategy to commission stand-out genre series that deliver the high stakes, sci-fi/fantasy experience our audience demands and embraces.”

Based on characters from the hit theatrical film Legion (2010), Dominion is an epic Supernatural drama set in the year 25 A.E. In this transformed post–apocalyptic future an army of lower angels, assembled by the archangel Gabriel, has waged a war of possession against mankind. The archangel Michael, turning against his own kind, has chosen to side with humanity against Gabriel. Rising out of the ashes of the 25 year-long battle are newly fortified cities which protect the human survivors. In Vega (formerly Las Vegas), the largest of these cities, two houses vie for control and the stage is set for political upheaval and a dangerous power shift. Meanwhile, a rebellious young soldier begins a perilous journey as the war between the human race and the fallen angels hell-bent on their domination escalates.

looks right up my street, can't wait
"The Thinker knows..." 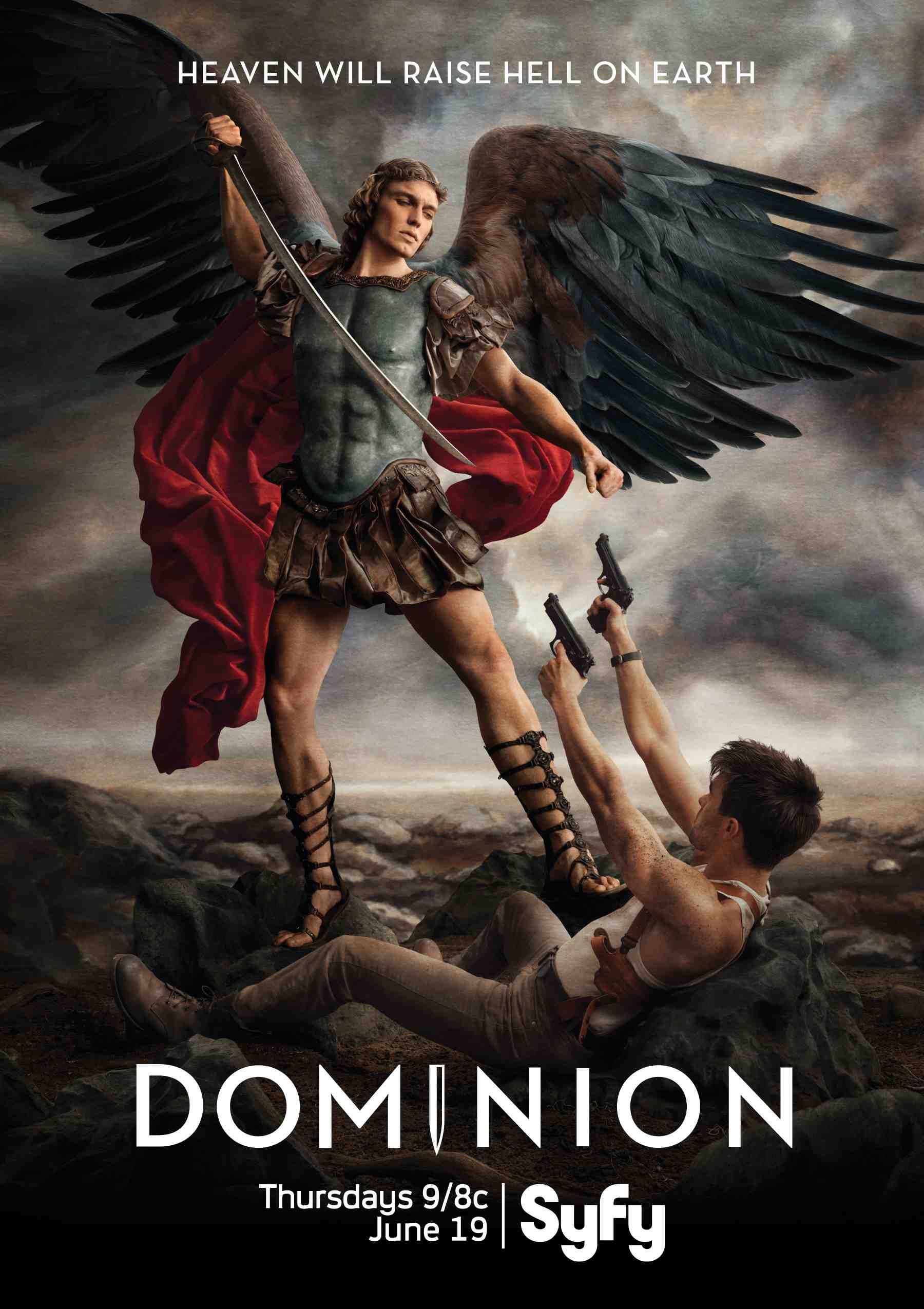 This looks like my kinda thing. I guess that means it will canned after one season
M

It's story is much bigger than the movie it's adapted from 'Legion', and as expected Anthony Stewart Head's performance stands out from the rest. I enjoyed it.
Last edited: Jun 20, 2014
D

This is tonight's viewing for me and the breadknife.

This was very interesting, hope it keeps attension in the coming episodes
"The Thinker knows..."

Watched Legion a few years back, thought it was OK, can't beat a bit of Angel action. As for the TV series, solid start, seemed to explain the situation succinctly. Good to see Anthony Head, although it might take a couple episodes to get use to his accent.

Any idea when this starts in the uk?

woppy101 said:
Any idea when this starts in the uk?
Click to expand...

No air date confirmed yet

This is ridiculous but I liked it, especially the Batfink moment.
Equip: Panasonic P65VT20, Xbox 360

Enjoyable enough, the opening flashback was good, the ep was not a dramatic as last week's opener.

patient000 said:
This is ridiculous but I liked it, especially the Batfink moment.
Click to expand...

I thought that was a solid second episode, kept me entertained, can't ask for much more.