Morning, this is my first post and have just ordered my New C1 OLED. Question is do I need a sound bar? I plan to have the TV recessed into a media wall with a fire underneath. Conscious the panel is so thin and the speakers are generally on the back, so will the sound be disturbed/muffled by having the TV in the wall? My gut says yes but people I’ve discussed with say the sound quality from the C1 is great. TV will be used for general tv watching, gaming and films etc.

if so any recommendations for a soundbar that works great with the TV?

Hi and welcome to avforums,

Don't know where you purchased it from but many retailers offer discounts if you purchase a soundbar along with the TV. Not recommending it specifically but for example: 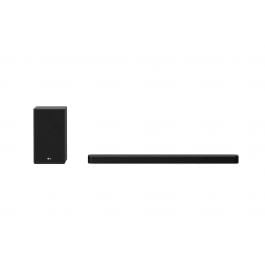 If it isn't too late I'd say get in touch with your retailer and take advantage of any package offers.

Any half decent soundbar will be way better than the built in speakers.
W

Thanks MI55ION for the reply. So would you say one is a must considering the TV is going to be recessed?

I’m worried the sound will be affected by the tv being in the wall. I’m looking to plan the wall so would like some advice as to whether I build a space for a soundbar too?

Thanks for the link ref a bar too.

To be clear I'd say regardless of whether its going on the wall in a recess or if it was table mounted, a soundbar of decent quality will do a far better job than the TV's own speakers. You'll get better sound separation, clearer vocals and significantly better low end.

Now regarding your concern about how the sound might be affected when it's recessed inside the wall if you were to use the built-in speakers alone, it might emphasise certainly frequencies (mid-low end) whilst slightly muddying others (mid-high end) - so long as there's a bit of space for the sound to escape. If there's no space then yes, it'll be detrimental and must consider a external sound device.

Assuming there is a clearance you'll get a perceived boost in sound which will seem like it's louder. A simple experiment to show this effect using your phone, put it against a wall and it'll appear louder but perhaps muffled slightly, take it away from the wall and the volume will drop but may sound cleaner.

If you are still in the planning stage I'd defo leave a section for a dedicated soundbar and run whatever cables you might need.

Thank you. Great advice. Still in the planning stage so can plan space for a sound bar too.

Thank you once again.

No probs matey, come back if you need help with anything else.

The soundbar will show its worth when you fire up a movie for sure but even with regular material it'll be night and day if you do direct a/b comparison. You'll be glad that it was included in your plans.
S

The built in sound of TV is OK for casual use e.g. watching live tv news/sport etc but rubbish for movies / series / drama compared to a dedicated sound system. Even a stereo amp with two bookshelf speakers is a dramatic improvement so yeah you definitely want some sort of external sound system.

I'd recommend getting a passive sound bar and using a avr, you can then add extra surround speakers and subwoofers of any make, standardised speakers and free ability to choose different avr, upgrade at will. Have loads of hdmi inputs, change avr to get hdmi version 3 etc

I honestly don't understand the whole concept of soundbars for serious TV sound. You are deliberately working with a self imposed set of physical constraints that make it five time harder (and thus five times more expensive) to get any given sound quality level and power output.
K

Hi, I have the CX 65" (last years C1). The sound quality as standard is really really good when using the stand (as the stand is designed to encourage the sound to come forward apparently)... My friend has his C1 wall mounted and it doesn't sound as good as mine - so the stand does make some difference. However, it still sounds good.

Now, if you are blocking the sound - then naturally the sound will not be as good as it can be.

I am planning a media wall in a different room and wondering if the recess for TV should be exactly the size of TV, or slightly bigger to allow the sound to flow out.

Otherwise you'll just hear muffled sound coming through your MDF as the speakers aren't at the front. In that case use a soundbar..

But then theres another predicament, because I want to recess my soundbar too, and some of the better ones have upward firing speakers ... Arghhh!!!
You must log in or register to reply here.

N
How effective is the "Adjust Logo Brightness" on LG OLEDs?