Planning on moving my N54L from my room to the loft and a little bothered by the temp difference as the summers are roasting up there and winters, majorly cold. Also, our loft is boarded but being 70/80 yr old house, the loft is rather dusty with plaster/cement from the roof.. Is this a concern or nothing to worry about?

Im planning on running 5 cat5 or 6 cables from the rooms to terminate next to the server via patch panel then into a new router with gigabit switching.

My only problems are where to mount the server/ router/ PP in the loft and what on/in? I also want to try and eliminate noise as much as possible so need some quiet mounting solutions for the server as opposed to just stuck on the timber floor.. - Was thinking some foam insulation on the base or polystyrene or something similar?

what sort of house do you have, and whats the loft space like.

Id suggest a rack of some sort to put the patch panel, router, Microserver etc.

I used a rack secured to my chimney in the loft - wish id put in a taller rack, but hey ho...

You could put your switch, router, patch panel and then leave sufficient space for the micoroserver and any other kit you may want top put in there? 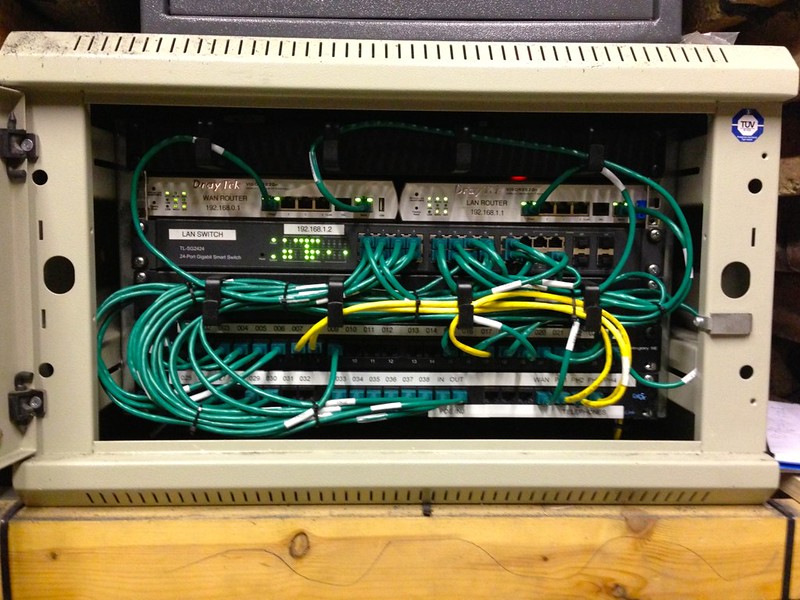 Im thinking of mounting a cabinet ( 9U model) from ebay Im bidding on atm against the chimney as we've also got the hot water system mounted there so already easy fixings.

Im not going to get a huge rack in because of access issues through the loft hatch unless its one which I can dismantle. I dont want to use anything too heavy though as a fair bit of weight up there already as my model rail lives up there now.....

Your server on top of the rack??

No, my server lives under the stairs . We have a pantry, so when we renovated, I stuck some cat5 outlets in there too.

It's cool in there so helps.

Might also get another pi for vpn server and Ddns so i dont have to leave micro on the whole time and can use wol/ scheduel startup/shutdown when needed!


Im ordering a 19" 9u cab tonight along with pp sockets and cable.

razer1 said:
... Got to get new router and also a 5 port gb switch for my gear. Simplier to run 1 solid run to mine and then switch rather than 4!! Need it for ps3, ras pi, desktop and also macbook maybe.
Click to expand...

Probably better to go for an 8 port switch as if you have 4 devices now, you'll fully populate a 5 port switch, and will be stuck when you want to add another device.

Thanks. Was thinking that as the price difference is like 3 quid !

What are netgear soho switches like?? Cant decide between the netgear one or the more expensive Tp one.

All the low-end, unmanaged Gigabit switches are pretty much the same in my experience. I've used TP-Link, Netgear, Zyxel and Tenda - they've all just worked.

I prefer those that have an indication as to which speed a device has connected at (often a yellow light for 100Mbit/s and a green light for 1Gbit/s). The Tenda (G1008D) and more expensive Netgear (GS608) ones do this. Unfortunatly it's not a feature they usually put in the descriptions.
M

It isn't a great idea to place wi-fi devices inside metal boxes - they form a Faraday cage and can seriously attenuate the transmissions.
Last edited: Nov 25, 2013

Am I best then to stick router on top of cabinet instead??

Thanks for the advice! Top stuff - Much appreciated as im not 100% atm ( docs think got slight bleed on brain and cyst also! ) so not quite thinking things through as usual ...

The best wi-fi is obtained with free space and line of sight between transmitters and receivers.

Metals and "wet" stuff (like foliage, new concrete, water tanks and cats) can cause lots of problems. Again, best avoided if possible.

In an ideal world one wouldn't put your Wi-Fi Access Points in the loft space at all, you'd place them as near to the client devices as possible. But if that's not practical, then try and ensure there's no metal etc. in the path between devices and try as best you can to avoid super thick walls. So "on top" of a metal box in the loft probably isn't the best locale and chimney stacks are probably best avoided.

If your wi-fi device has external/movable antennas, you can experiment with orientation a bit. For a simple stick antenna - | - ratio energy propagate out more perpendicularly than along the axis. So you could try pointing your antenna's like this \ / to try and aim then a bit. Increasingly though, modern wi-fi AP & routers use internal antenna so there's not much you can do.

Some experimentation may be required to acheive the optimum (and radio channel choice can be a factor too if you're getting interference from the neighbours.)
You must log in or register to reply here.