Summit Entertainment's The Twilight Saga is coming to an end soon, their sister company Lionsgate have 'The Hunger Games' franchise, now reportedly Summit have tasked director Neil Burger (Limitless) who was previously attached to 'Uncharted: Drake's Fortune', to helm the movie adaptation of Veronica Roth's New York Times bestseller novel - 'Divergent', which is set within a fictional dystopian world.

Like 'The Hunger Games' Katniss Everdeen, the 'Divergent' novel has a young female adult lead in Beatrice Prior. Summit also picked up the second book 'Insurgent'.

In Beatrice Priors dystopian Chicago world, society is divided into five factions, each dedicated to the cultivation of a particular virtueCandor (the honest), Abnegation (the selfless), Dauntless (the brave), Amity (the peaceful), and Erudite (the intelligent). On an appointed day of every year, all sixteen-year-olds must select the faction to which they will devote the rest of their lives. For Beatrice, the decision is between staying with her family and being who she really isshe cant have both. So she makes a choice that surprises everyone, including herself.

During the highly competitive initiation that follows, Beatrice renames herself Tris and struggles alongside her fellow initiates to live out the choice they have made. Together they must undergo extreme physical tests of endurance and intense psychological simulations, some with devastating consequences. As initiation transforms them all, Tris must determine who her friends really areand where, exactly, a romance with a sometimes fascinating, sometimes exasperating boy fits into the life she's chosen. But Tris also has a secret, one she's kept hidden from everyone because she's been warned it can mean death. And as she discovers unrest and growing conflict that threaten to unravel her seemingly perfect society, she also learns that her secret might help her save those she loves . . . or it might destroy her.
Click to expand...

Kate Winslet is in talks to join the film

Shailene Woodley (The Descendants) is set to play the lead

- Maggie Q (Nikita) to play Tori, the owner of a tattoo parlor who is part of the choosing ceremony that divides people into factions and a friend to Shailene Woodleys character, Tris.

- Ansel Elgort (Carrie) cast in the role of Caleb, the twin brother of Tris who
turns his back on his familys clan to be part of a different
clan.

Why all the lead females in these films got stupid names ?

barnaby jones said:
Why all the lead females in these films got stupid names ?
Click to expand...

let me make a call to their parents

raigraphixs said:
let me make a call to their parents
Click to expand...

I meant the characters

barnaby jones said:
I meant the characters
Click to expand...

i'll call the author instead.......she said she thinks those are the kinds of names people will be given in future dystopian societies

You only have to look back to the Mad Max films, etc, to see no one rarely uses sensible names

raigraphixs said:
i'll call the author instead.......she said she thinks those are the kinds of names people will be given in future dystopian societies

You only have to look back to the Mad Max films, etc, to see no one rarely uses sensible names
Click to expand...

Lol, I can imagine the think tank right now.
' okay guys, thinking caps on, what cool names will everyone have in a dystopian future ? '
6 and 1/2 hours later ......
'Katniss'

if you want ridiculous future-names you need look no further than Van Damme's Cyborg... Gibson Rickenbacker? Fender Tremelo? I'm guessing the only people to survive the apocalypse were guitar players
Although, to be fair, Nic Cage usually has a far worse name in pretty much everything he's in, no matter what time period it's set in. And most of the Mad Max names seem like normal Aussie names to me, if their soap operas are anything to go by

Jai Courtney (Good Day to Die Hard, Jack Reacher) cast in a leading role as Eric, the leader of the Dauntless Faction, his group is dedicated to courage, bravery, and fearlessness.

Shailene Woodley (TASM2) as Tris Prior

A sequel to Divergent is already in development.

Deadline reports that Summit Entertainment has enlisted Brian Duffield (Jane Got a Gun) to write the second film.
films ive seen at the cinema this year

will be released in Imax

Divergent is directed by Neil Burger (The Illusionist) from a screenplay by Evan Daugherty and Vanessa Taylor and Neil Burger and stars Golden Globe® nominee Shailene Woodley (The Descendants), Theo James and Academy Award® winner Kate Winslet (The Reader, Titanic). The film is a thrilling adventure set in a future worldwhere people are divided into distinct factions based on their personalities. Tris Prior (Woodley) is warned she is Divergent and will never fit into any one group. When she discovers a conspiracy to destroy all Divergents, she must find out what makes being Divergent so dangerous before it's too late.

&#8220;With The Hunger Games and Twilight franchises, our Lionsgate and Summit partners have proven to be a powerful force in adapting novels for the global theatricalmarketplace,&#8221; said Greg Foster, CEO of IMAX Entertainment and Senior Executive Vice President IMAX Corp. &#8220;We're thrilled that IMAX audiences across the globe are going to be able to experience the first installment of this next highly successful franchise in the most immersive way possible.&#8221;

&#8220;We're delighted to continue our successful collaboration with IMAX, with whom we have already partnered on the global blockbuster Hunger Games and Twilight Saga franchises, and we're especially pleased that we can introduce our newest young adult franchise, Divergent, to the movie going public in the premium IMAX format that celebrates its status as a special and memorable event,&#8221; said Lionsgate Motion Picture Group Co-Chairs Rob Friedman and Patrick Wachsberger.

The IMAX release of Divergent will be digitally re-mastered into the image and sound quality of The IMAX Experience® with proprietary IMAX DMR® (Digital Re-mastering) technology. The crystal-clear images, coupled with IMAX's customized theatre geometry and powerful digital audio, create a unique environment that will make audiences feel as if they are in the movie.
Click to expand... 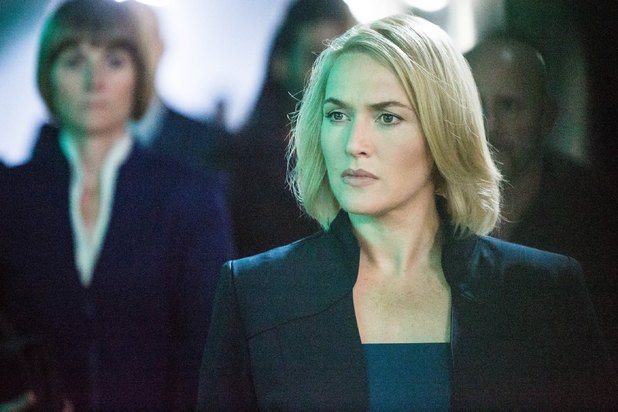 Have to agree with "Choosing Boyfriends: The Movie" - a quote from Joss Whedon.
Are these idiotic cash from teenage girl flics going to ever end...Twilight,The Host, Beautiful Creatures, The Hunger Games,City of Bones (Mortal Instruments)....and on and on..... 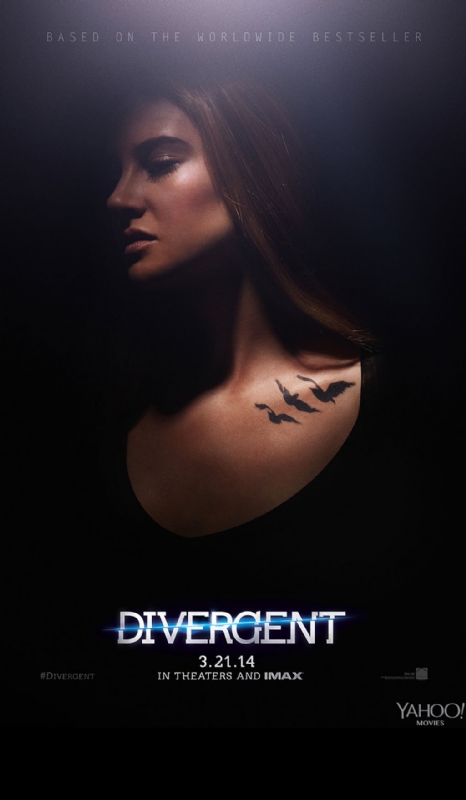 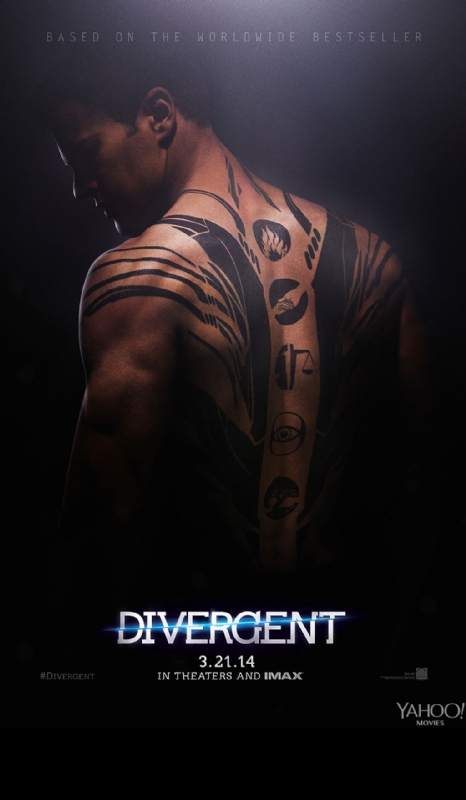 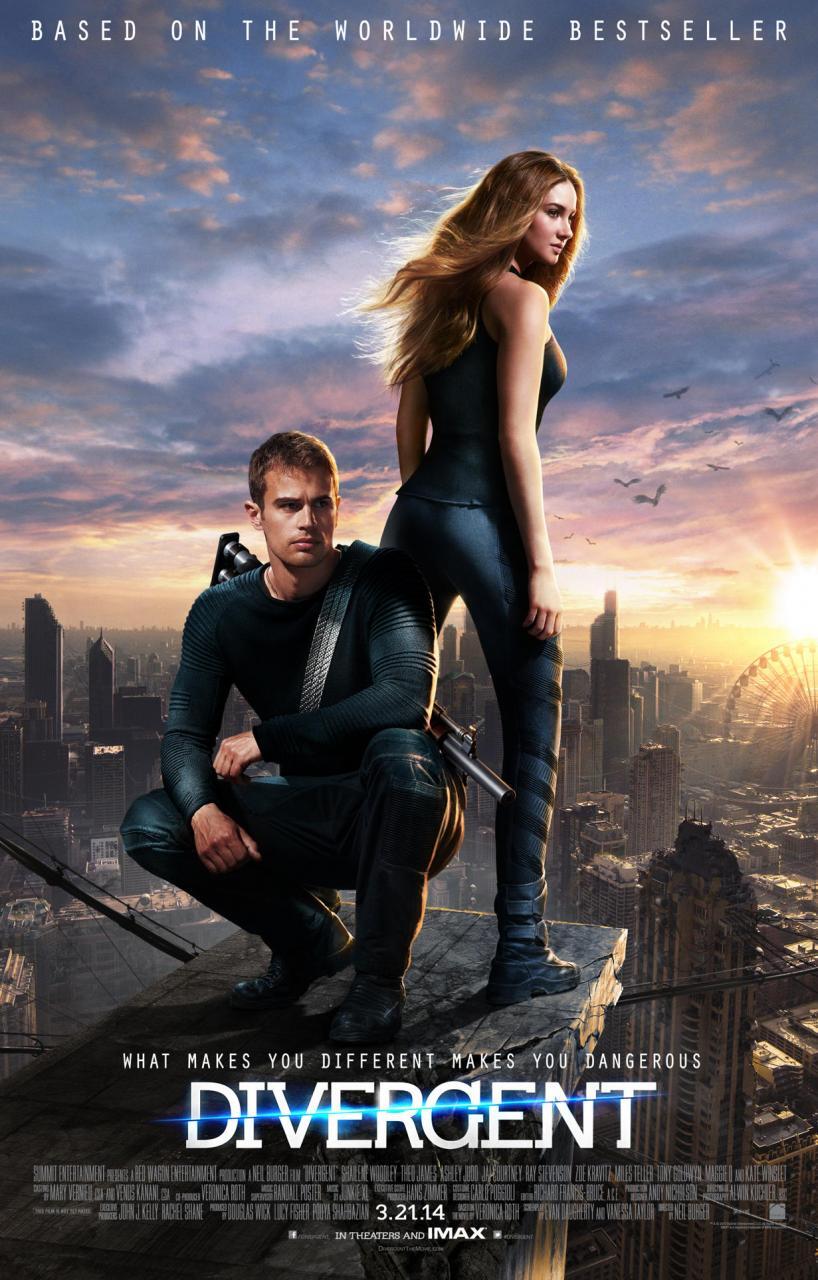