I've recently revisited Def Leppard's first 3 albums and I must say they sure are classic hard rock of the very highest standard.

In fact, I would go as far as to say that beween "On Through the Night", "High n Dry" and "Pyromania" there are no tracks [really!...not one] which I would fast forward. That is an astounding feat.

Of course it all went pop from Hysteria onwards, but on these early records Def Leppard were perfect.
Polymer Records Midwest Promotions Representative.

I loved the Lepps NWOBHM period along with Maiden (though never that keen on Biff Byford and the boys ), and you're absolutely right about those superb three albums . They were just young lads when they churned out those classics!
Tinfoilers please PM me for cheap anti-5G homeopathic mp3 files

Yep...been a Def Leppard fan for a long time,and for me,Pyromania was the album where it all fell into place for them.
Unfortunately as we all know,it was mainly down to America to sit up and take notice then,because they werent being received well in the UK at that point.
That all changed of course with the release of Hysteria,which i regard as a great album also.....was much more polished than Pyromania which gave it a different sound.
Hysteria was their last great album....kind of went downhill to varying degrees after that.

Have seen them live 5 or 6 times...great live band.
"What aint no country i ever heard of.....they speak English in what?"​

I hate def leppard with a passion. The singer really must stop using the helium. Overrated. Iron Maiden were a vastly superior proposition.
'I don't agree with that in the workplace'

EricHitchmo said:
I hate def leppard with a passion.
Click to expand...

Wow...thats not normal....unhealthy even.
There are plenty of bands that i do not like....but i would never even consider saying i hate them with a passion.
The singer is called Joe Elliott by the way.

I have never been a big fan of Iron Maiden,but i can fully appreciate their achievements,and so would never try to put them down in any way.

Everybody is entitled to an opinion,but on reflection...i would hope you consider your choice of words to be a little too strong under the circumstances.
"What aint no country i ever heard of.....they speak English in what?"​

Blimey, can't you hate a band as you Love one

Plently of bands I can't stand, but far worse is wehen you grow to hate a band that you loved.

soundstory said:
Blimey, can't you hate a band as you Love one
Click to expand...

Of course you can...but you completely missed the point.
"hate with a passion" is much more serious than simply hating....it is like taking it to a personal level,and that is definitely unhealthy,when it concerns a group of people you dont even know.
"What aint no country i ever heard of.....they speak English in what?"​

Ron240 said:
Of course you can...but you completely missed the point.
"hate with a passion" is much more serious than simply hating....it is like taking it to a personal level,and that is definitely unhealthy,when it concerns a group of people you dont even know.
Click to expand...

I dunno, I hate dance music and the vast majority of cRap and so called 'RnB' with a passion.

On the Leps, saw the original line up on the 'High'n'dry and Pyromania tours. Very good tbh. Went off them with Hysteria. Too bland and commercial for me.

Can't really compare them with Iron Maiden as I never could stand them. Saw them with D'ianno and I wish I hadn't.

As for Biff and the lads (they were too old to be called 'boys' ) they weren't much on record, but by God they were good live! Saw them a few times in the late 70's and early 80's and they never disappointed.
"The avatar is William Ewart Gladstone, and I should think he's turning, nay spinning in his grave right now".

Guys, How can you use def lep and the maiden in the same sentence.. Lep was o.k. in small doses but maiden.. the only true British metal band in the 80's..

Holy_Pilgrim said:
Guys, How can you use def lep and the maiden
Click to expand...

I only used them in the context of NWOBHM ... of which Maiden, the Lepps and Saxon have always been considered the main movers (and then others like Diamond Head etc) ... though why they were ever been regarded as Metal I do not know (or Whitesnake for that matter, up until Coverdale's hair metal phase)
... did you hear about Bruce: www.telegraph.co.uk/news/main.jhtml?xml=/news/2007/10/26/ncyber126.xml
Tinfoilers please PM me for cheap anti-5G homeopathic mp3 files

You'd better hope it's a better gig than this year's one...Playing the
WHOLE of Life and Death and leaving 2 classics for encores was just arrogant crap. The biggest disappointment of my concert going life, ever. Ever.

kherm said:
You'd better hope it's a better gig than this year's one...
Click to expand...

As its their '80s back catalogue tour' (and possibly early 90s, judging by Rod's final word below ) combining elements of the World Slavery, SIT and SSOASS sets/Eddies/pyrotechnics etc and presumably coinciding with the long-awaited release of 'The History of Iron Maiden, Pt. 2' DVD ...it should be!! 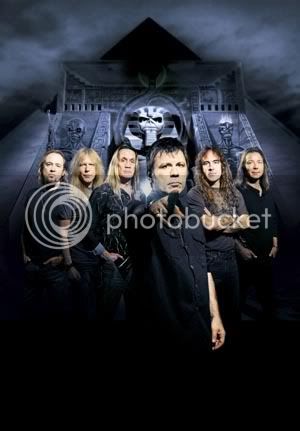 To tie in with forthcoming 2008 releases on DVD of the classic 'LIVE AFTER DEATH' and 'MAIDEN ENGLAND' concert videos (more details coming soon) this tour, aptly entitled 'SOMEWHERE BACK IN TIME', will revisit the band's history by focusing almost entirely on the 80's in both choice of songs played and the stage set, which will be based around the legendary Egyptian Production of the 1984-85 'Powerslave Tour'. This will arguably be the most elaborate and spectacular show the band have ever presented, and will include some key elements of their Somewhere In Time tour of 1986/7, such as the Cyborg Eddie.

Steve Harris comments; "On the last tour we opened the show by playing our new album 'A Matter of Life and Death' in its 80 minute entirety. We thought we needed the challenge and it proved the right thing to do. However, it can be hard on the fans playing so much new material and we really appreciated the superb support they gave us. So now l guess it's payback time. It's tremendous to be able to use the profile of the DVDs to do what is effectively an 80's show. It will be enormous fun and by changing the approach to the songs we play tour by tour it keeps it fresh and interesting for both the band and the fans alike. l think 'Powerslave' was an incredible show with the Egyptian theme and look forward to seeing it all again myself. We have been planning this for a few years and hoping to take it to Australia -- so we are all delighted that it has now worked out. I would also like to say that we are all are very grateful to our loyal fans in Oz who have kept the Maiden flag flying all these years and we are sorry to have disappointed you for so long. Thanks and see you there"

Rod Smallwood, Iron Maiden's Manager, further commented; "Following Bruce's various hints from on stage this last year about our plans for 2008 ("We are taking some time off to build some pyramids!"), fans have been pestering me for details of the tour and especially asking which songs from that era will be played. That may be as easy as a run in the hills but we will keep our aces close to our chest on this issue. I know it would only take a couple of minutes but at this stage of planning, I'd have to be clairvoyant to know what they will do. I'm sure though it will be no revelation for you that we intend to make up for those wasted years by visiting a large number of hallowed metal venues around the world. Historically 'Powerslave' was an incredibly important album for the band and it would be madness if we didn't give the fans a taste of the full on Iron Maiden show from that time. With our jumbo there really is no rime nor reason why the band cannot now visit fans almost everywhere as many have been real troopers to have waited this long. Heaven only knows what the band will choose but if l could and did tell you now l would have to shoot you! You'll all have to be patient and see. But it will be spectacular. No fear!!"
Click to expand...