Originally bought a £70 mount from richer sounds, believe it was made by 'sanus' Looks smart enough, but has these philips screw heads that secure the tilt, which are just not strong enough to get the thing to sit perfectly level without minor movement (projector is big) Even after several hours I still had a slight droop, creating bottom 5cm of screen to diagonal off.
I've lived with it for 2 years, but I'd prefer something better suited

There's a number on amazon with mixed reviews and I don't want to end up with something failing similarly.

My only asks is a flexible ceiling plate, I've currently got 2 large coach screws going in line in to a joist at 0 and 180 degrees, then 2 large plasterboard fixings at 90 and 270 degrees, that I'd like to re-use.

That and a mount that looks relatively smart and not cheap.

MartinH32 said:
I use the official Epson mount. It's good but fiddly as anything to fit.
Click to expand...

Could you measure the drop between ceiling and top of projector, please?
Are you happy with it, or would you suggest something else?

antl said:
Would that be:

Could you measure the drop between ceiling and top of projector, please?
Are you happy with it, or would you suggest something else?
Click to expand...

Yes it's that one. I'm more than happy with it - but it's fiddly as anything but low profile enough. Fitted upside down the gap between the bottom of the feet (which obviously sticks out more than the rest of the projector) and where it's mounted is 5.5cm. There is a white plastic surround you can fit around the mount - I didn't fit mine as it's white. I've popped my Harmony hub on the projector too

Supporter
One word Peerless - the universal one, strong, universal and very easily and accurately adjusted :- 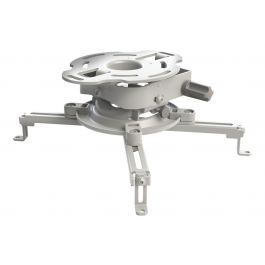 Thatsnotmynaim said:
One word Peerless - the universal one, strong, universal and very easily and accurately adjusted :-
Click to expand...

+1
You must log in or register to reply here.

May 29, 2021
imgqtr
I
N
Mounting projector on ceiling, advice please!