CX + SN11RG can't get optical working for DTS and is there another way??

My setup (before i realised eARC wont carry DTS)

I use my windows based HTPC for playing BR discs and BR rips i have made over the years but just recently have discovered that my easy set up of everything going into the TV causes issues for anything with DTS which is suprisingly a lot especially older titles, i have it setup this way as it saves me messing around with 2 remotes to change two inputs and i seem to remember reading that it's better to plug the PS5 into the TV

In order to get around this i hooked up the optical from the HTPC to the soundbar thinking when i needed to play DTS i could just switch the output on the HTPC but when i try to select optical on the soundbar it I get no sound and the soundbar goes back to showing EARC on the display, the realtek manager recognises the optical cable plugged in and I have changed the output but still nothing, optical cable is good and confirmed working on other kit.

My question after all that is, is it possible to have the soundbar still connected via eARC for 95% of things and switch to optical or does the soundbar notice it's got an eARC connection and overrides the optical, i also turned off eARC on the TV when trying this.

Also is there a better way of doing this, i tried connecting the HTPC into the soundbar and it works even with DTS but i just don't want to run it this way for a number of reasons and it could be my eyes but the colours looked a little washed out.
W

Just to add to this i think i have had my suspicions confirmed, if i physically unplug the eARC HDMI cable from the soundbar leaving the HTPC connected to the TV via HDMI and optical to the soundbar i get sound

This can't be how it's meant to work in that you can only select optical inputs if you physically unplug the eARC connection.

BTW tried selecting optical on both the remote and the app, same result the soundbar doesn't believe you really want optical and overrides your decision with eARC

This is exactly the issue I have and I have not found a way around it other than unplugging the HDMI cable, which is really annoying.

I have a karaoke setup. TV is connected to the soundbar via HDMI during normal use. When in karaoke setup I want the sound to come from the mixer to the soundbar via optical cable and the TV to send the audio signal to mixer instead via HDMI eArc. If you put it to optical while the TV is off, it stays on it until you turn on TV. As soon as you switch the TV on, it changes to HDMI eArc.

I wish they put HDMI eArc and optical as separate options on the soundbar and stick to the option we select.

just found this on the user manual

"If this unit is connected by OPTICAL and ARC at the same time, the ARC signal has a higher priority." which is annoying specially because I have the soundbar wall mounted and the HDMI cable is a bit hard to remove as it sit right against the wall.

Just run your HTPC direct into the soundbar. You said you though the colours looked weird when you tried it, you probably didn't change the picture mode settings on that HDMI Input to be the same as what you had on the HDMI Input you used when connecting the PC directly.
Hisense 55 U8QFTUK; Samsung HW-K551; PS5; PS4 Pro; PS3 Slim; CC Ultra; CC Gen 3; LG 27UL600; Arctis Pro Wireless
My Hisense 55 U8QFTUK picture settings --> Hisense u8qf owners
Motionflow & Film mode --> Sony Motionflow & Film mode Settings Explained (finally!)
J

Windows can't send audio to 2 outputs at the same time, so in Windows Sound control panel you have to set the Optical output under Playback to be the Default Device. This means the HDMI can't be used for audio though while the Optical is plugged in. 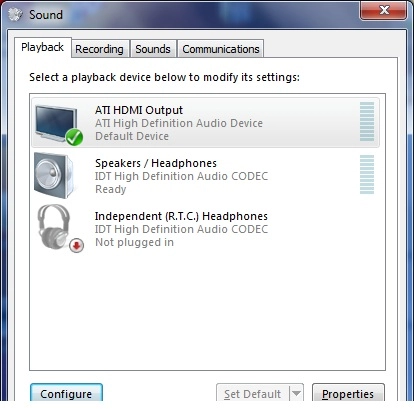